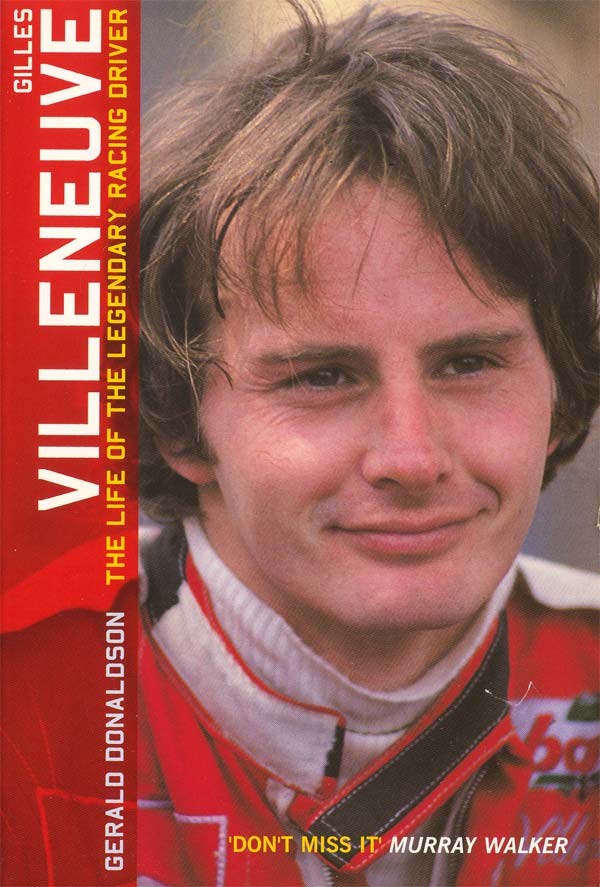 Gerald Donaldson’s biography of Gilles Villeneuve is tipped to become a film to hit cinema screens in 2007. It is a classic book on one of the sport’s most beloved drivers, that every F1 fan should read.

There have been many Formula One drivers who have impressed, astounded even, and tragically died, leaving behind treasured memories and legions of idolising fans. Most recently, of course, there has been Ayrton Senna, but before Imola 1994 the greatest driver most well-remembered for suffering an untimely death in the sport was Gilles Villeneuve. Not just for the manner of his final accident, while trying to get ahead of his team mate whom he felt had betrayed him, but because Villeneuve’s most memorable driving feats challenged what many people thought possible in Formula One.

Canadian journalist Gerald Donaldson is a widely respected commentator on the sport, and well-placed to write the definitive work on Canada’s most famous racing driver. Donaldson wrote the book with input from Gilles’ widow Joann and former manager Gaston Parent and the 1989 hardcover was reprinted as a paperback in 2003 (alongside Donaldson’s biography of James Hunt).

What sets it apart from other biographies of other drivers, apart from the often extraordinary subject matter, is that Donaldson gives so much space to comments from other drivers, drawing heavily on contemporary journalism. The closing passages on the feud with Didier Pironi draw heavily from British F1 journalist Nigel Roebuck’s interviews with Villeneuve – the two became good friends. It gives the reader a strong sense of how the F1 world reacted to his outrageous style on arriving in the sport, and how, as he began to win races, more people appreciated that his was an almost unique style.

Donaldson tackles Villeneuve’s shortcomings unflinchingly – this is no one-sided eulogy for a great talent lost. But the passages noting the trouble his marriage to Joann ran into are balanced with sensitive portrayals of Villeneuve’s most appealing characteristics – his simple tastes and the reluctance with which he embraced the heady F1 lifestyle, shunning the five-star hotels for the simple comforts of his trailer parked in the middle of the circuit (into which journalists were welcome, providing they took their shoes off).

But what Villeneuve is most well-remembered for were his outrageous, inspired performances on the tracks and his now-legendary stunts off it (usually involving Ferrari road cars and terrified journalists and, later on, flying his private helicopter at very low altitude with even lower fuel levels. Niki Lauda recounts: “I am in my hotel room at Zolder. It is pitch dark outside. Suddenly I hear the chatter of a helicopter. I see a chopper hovering outside, using its headlights to find a suitable landing pad. Absolutely crazy! Illegal, impossible, mad. Of course, who could it be but Gilles.”

If anything fails to emerge well from this book it is that Villeneuve, a driver with great feel for how a car handled (if little mechanical sympathy – Enzo Ferrari called him The Destructor), struggled to translate those skills as Formula One cars became more dependent on ‘ground effect’ aerodynamics, which were banned in the wake of his death. As endless politicking between the dominant powers in Formula One failed to reach an agreement on banning the ‘wing cars’, so they wasted the lives of drivers like Villeneuve. But the political dimension too is somewhat under-played.

The book tells a fascinating story, more than tinged with sadness, and its suitability for a film adaptation is plain to see. You have to worry, though, that Hollywood will not treat the Villeneuve story with the even-handedness that Donaldson has. This book gives a better account of Villeneuve’s racing years than any other source, and as a tribute to the memory of one of the greatest F1 drivers is an essential book.