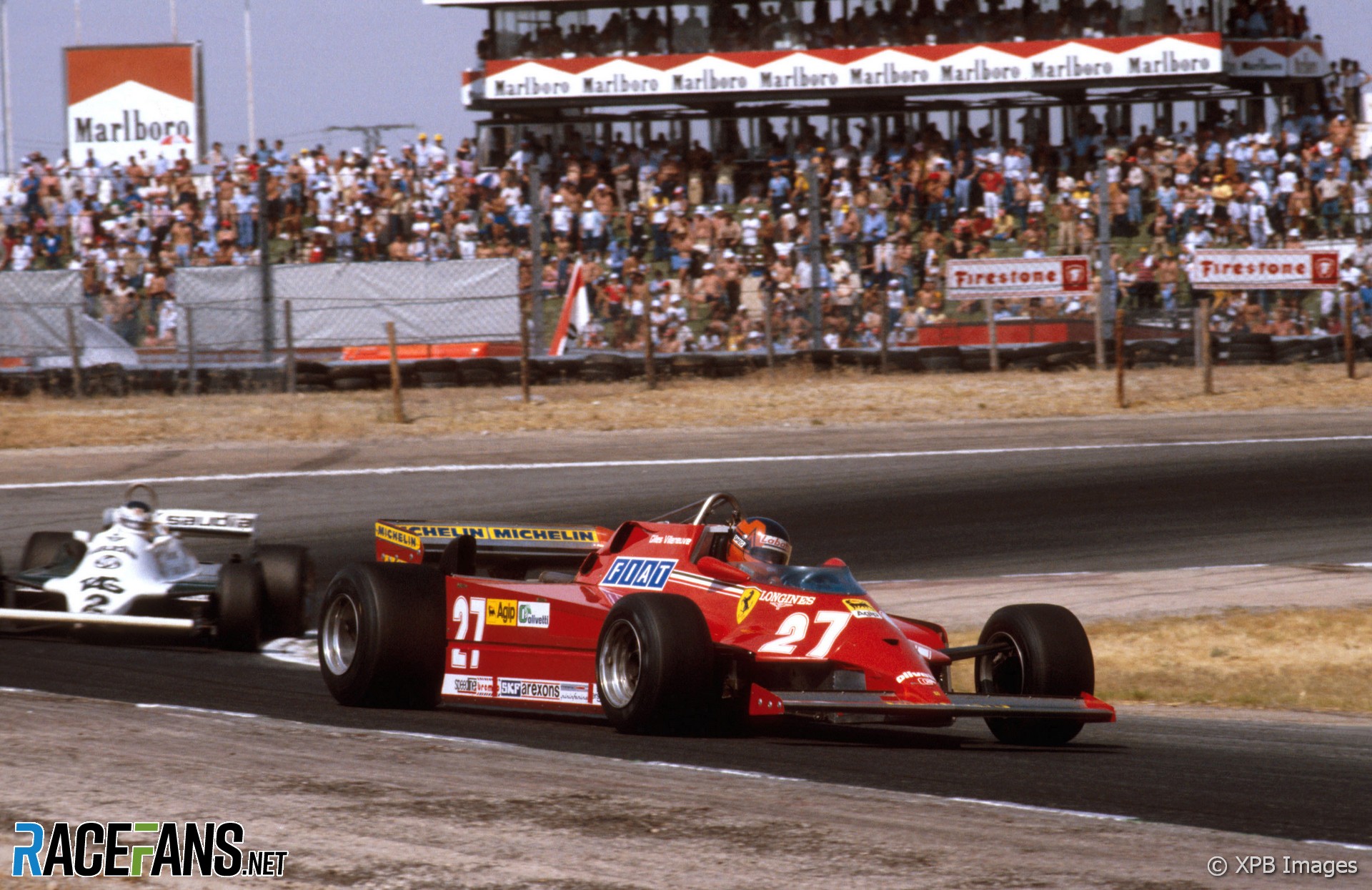 Gilles Villeneuve’s victory at Jarama on this day in 1981 was instantly recognised as one of the great Grand Prix wins.

Villeneuve resisted constant pressure for 67 laps to win in what was clearly an inferior car.

It was his final triumph before his untimely death the following year. And it was a win that would simply be impossible to repeat today.

The previous year’s Spanish Grand Prix had lost its status as a world championship event amid the bitter wrangling between the teams’ association, FOCA, and the governing body, FISA.

History nearly repeated itself in the run-up to the 1981 edition. The race organisers attempted to allow local driver Emileo de Villota into the race with his Williams FW07, usurping one of the ATS entries, which they claimed had arrived late.

The race organisers backed down when it was made clear to them the race would be stripped of its world championship status if de Villota was allowed to participate.

The Jarama circuit, north of Madrid, held the Spanish Grand Prix for the last time in 1981. It may have been designed by John Hugenholz, the man behind the popular Suzuka and Zandvoort, but Jarama’s compact, narrow layout was comprised mainly of slow corners and somewhat unloved.

Denis Jenkinson, writing in Motor Sport, complained about a “Mickey Mouse” circuit with “pretentious corner names, like Nuvolari, Ascari, Varzi, Bugatti etc…” This was to be the final race at the track and the last Spanish Grand Prix until Jerez arrived on the calendar five years later.

“After that, forget it. It’s just like a fast, red Cadillac, wallowing all over the place”.

An impressive qualifying effort put him seventh on the grid, eight-tenths of a second faster than his team mate. Didier Pironi was beset by turbo problems – Ferrari had followed Renault’s lead in using 1.5-litre turbocharged engines in 1981.

Directly behind Villeneuve was Nelson Piquet, mystified by the unusually poor handling of his Brabham.

The Williams were running true to form near the head of the field but for the third year in a row at Jarama the grid was headed by Jacques Laffite’s Ligier.

Jones throws the lead away

Laffite bogged down at the start and was swamped by the chasing pack, slipping from first to 12th while the two Williamses sprinted into the lead. As they completed the first lap cars one and two were first and second, Alan Jones leading Carlos Reutemann.

Several cars had been creeping forward as the red lights turned to green. Villeneuve’s wasn’t one of them – but he made a blistering getaway to clinch third place.

Flogging his Michelins for all they were worth, Villeneuve quickly mounted an attack on Reutemann. Coming from an improbable distance behind at the start of lap two he thrust his way around the outside of the Williams into second place.

Reutemann must have sat back and consoled himself with the thought that the Ferrari’s tyres would go off before long. They hadn’t been holding up well and it was a particularly sweltering day in Spain.

This handed Jones a massive opportunity: he was leading, with rival Piquet out of the points in seventh, and his even bigger rival, Reutemann, now bottled up behind Villeneuve. A win, nine points and a reduced deficit to Reutemann in the championship beckoned.

But Jones made an error similar to that of a footballer bearing down on an empty goal who somehow contrives to chip the ball over the crossbar. He inexplicably spun off at the start of the 14th lap at Ascari, handing the lead to Villeneuve.

Alain Prost was the next to drop out, spinning on lap 29, elevating Laffite to fourth.

Now chasing John Watson, the pair come upon Laffite’s team mate Jean-Pierre Jabouille – and Laffite seized an opportunity to pass, taking third on lap 49. Jabouille, struggling to recover from the leg injuries he suffered in a crash the previous year, retired from F1 after the chequered flag.

Traffic was proving a serious concern on the short, tight circuit. Laffite and Watson reeled in Reutemann, who was having to hold his car in third gear at times as he chased Villeneuve. As they filed past Eliseo Salazar, Laffite squeezed past Reutemann and Watson followed him by.

Villeneuve carefully reduced the pace, taking all the time he needed in the slow corners where he couldn’t be passed, and using the Ferrari’s prodigious grunt to blast away on the straights. He held up the cars behind him to the extent that they stopped gaining on the next car to be lapped, Giacomelli’s Alfa Romeo.

Villeneuve’s defending was thorough but scrupulously fair: no sudden moves, no chops. He positioned his Ferrari carefully and played his one strong card – its straight-line speed – to perfection on every lap.

The cars behind were tripping over themselves in an effort to pass. Elio de Angelis’s Lotus caught up, making it a five-car train.

Laffite threw everything he had at the Ferrari but Villeneuve resisted him to the end. The five cars crossed the finishing line almost as one, separated by just 1.24 seconds.

“It wasn’t a race, it was a show,” complained Reutemann. “It was very slow, ridiculous, but there was nothing you could do.”

Villeneuve’s defensive tactics meant the average speed for the race was 3mph slower than it had been the year before.

It was a remarkable win – and one that would have been utterly impossible had his rivals had DRS.