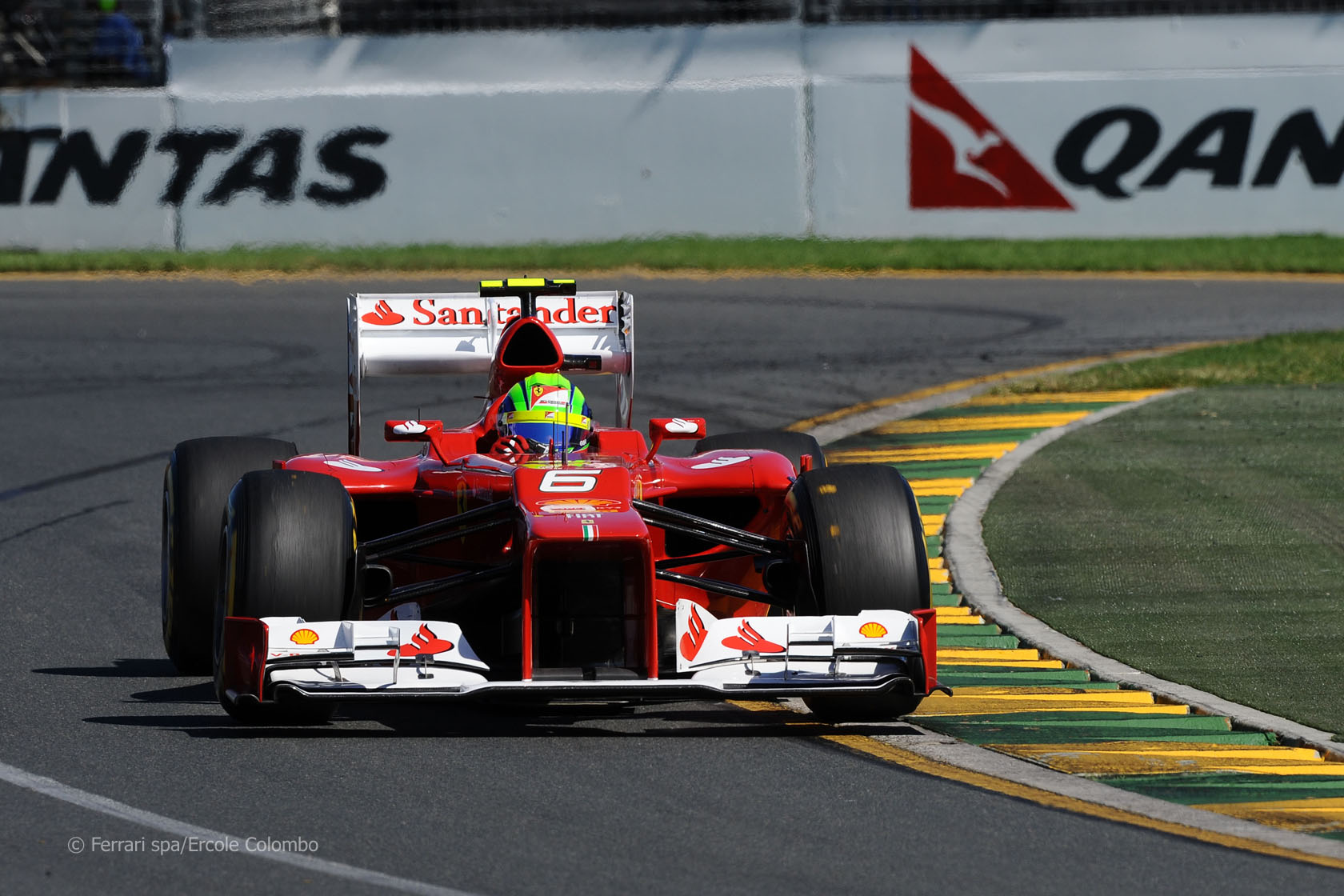 Before the Malaysian Grand Prix the internet was awash with rumours Ferrari will introduce a B-spec car in the May test at Mugello.

We’ve heard similar claims in recent years when Ferrari have faltered early in the season. But despite Fernando Alonso’s surprise win in Malaysia it’s clear they have significant problems with the F2012.

Much attention has been focussed on its pull-rod front suspension. Last year most teams followed Red Bull’s lead in adopting pull-rod suspension at the rear of the car but Ferrari did not.

This year as well as using pull-rod suspension at the rear of their car, Ferrari have become the only team to use it at the front of the car.

The car has looked a handful to drive and was well over a second per lap off the pace in the dry in Sepang.

It’s doubtful this deficit is coming from a single area. It appears the exhaust position on their current car ?óÔé¼ÔÇ£ the so-called ‘Acer ducts’ ?óÔé¼ÔÇ£ needs to be changed in order to better seal the diffuser.

Ferrari will likely move the exhausts forward to allow more space to shape the airflow towards the floor. This would mean a change to the side-impact structure and therefore a new crash test.

The other question mark surrounds the front pull-rod suspension. Will the Scuderia persist with the system or abandon it in favour of a more traditional push-rod system?

In this short article we?óÔé¼Ôäóll examine the difference between the pull- and push-rod systems and how likely it is that Ferrari will make the switch back to push-rod.

The basics of suspension in an F1 car

An F1 car has a very small degree of suspension travel compared to a road car. Its purposes are not just to make the car ride well over bumps, but to improve traction and aid aerodynamic performance.

The suspension controls for bumps on the track and roll when cornering, both which affect the handling of the car. This is very complex as there are many dimensions to the car’s motion, as we’ll see later.

Suspension plays a vital role in managing aerodynamics. If a constant ride height can be maintained the car’s aerodynamics work better.

Also the suspension arms and wishbones can act to manage airflow downstream. Packaging is also important ?óÔé¼ÔÇ£ the primary benefit of the rear pull rod was to reduce the centre of gravity (CoG) of the car (which we?óÔé¼Ôäóll see when we examine the front pull-rod in detail) and to create more space in the coke bottle zone to maximise airflow over the diffuser.

Most teams use a push-rod suspension system similar to that shown in the first illustration at the front of their cars.

The suspension arm, coloured blue, connects from the lower part of the wheel upright to a rocker located in the top-part of the chassis. The rocker connects the push-rod to a torsion bar and damper which manages ‘bump’ – i.e. the up and down movement of a wheel. The torsion bar is basically a spring but is twisted rather than compressed.

In addition there is an anti-roll bar which links the suspension across the chassis to control the degree of roll. This redistributes weight to the inside tyre, which helps traction. If you make the bar too stiff then when one wheel goes into bump the other follows and the car feels very unstable.

The final components are the inerter and heave spring. The heave spring manages vertical movement ?óÔé¼ÔÇ£ i.e., when both wheels rise or fall together. Lastly the inter is a very subtle component and is tuned to the natural frequency of the tyres and translates the oscillating motion of the rubber into rotational energy ?óÔé¼ÔÇ£ it is a spinning mass on a threaded bar ?óÔé¼ÔÇ£ again to improve traction.

Of course, not all the bump absorption takes place in the suspension: Wheel rubber flex accounts for around 30% of this total movement in an F1 car.

The next illustration shows a pull-rod set-up. The components and function are the same.

There are two differences: the suspension arm is connected from the top of the upright to the bottom of the chassis, and the internal components are lower in the chassis.

This set-up has two advantages over the push-rod. By placing the suspension components closer to the ground the centre of gravity is lower. Also the suspension arm is better able to condition airflow from the front wing towards the sidepod so in theory there is a small aerodynamic gain.

However, the chassis shape is constrained by FIA guidelines so the aero gain is not as great as it is when pull-rod suspension is used at the rear of the car.

There are two main disadvantages to front pull-rod suspension. One is that the the upper wishbone must transmit more load, some of which would otherwise have been carried by the push-rod. This means the chassis and wishbone needs to be strengthened ?óÔé¼ÔÇ£ see the yellow circle. This adds weight and negates somewhat the CoG gain.

The second disadvantage is it takes longer tune a pull-rod. This is important given the limited testing time in F1 today. Teams need to rapidly tune spring and damper settings and if the components are hidden away this is trickier and potentially reduces valuable track time.

In summary the net benefit of switching to a pull-rod is a (very) small aero gain at the expense of tuning simplicity. The final illustration shows the pull-rod and push-rod side-by-side and the difference in geometry and CoG are apparent.

However, Gary Anderson raised an interesting point in Autosport that may further comprise the front pull-rod set-up.

By connecting the push-rod to the wheel upright the driver can use steering angle to affect the suspension. Under steering the natural movement of the push-rod reduce load transfer across the chassis and effectively allows a softer set-up.

The opposite happens with a front pull-rod so it is connected to the wishbone rather than the upright to counter this effect. Hence all else being equal you need to run a stiffer suspension set-up which compromises mechanical grip.

In short, Anderson?óÔé¼Ôäós assertion is that the pull-rod also has mechanical compromises that more than offset the (small) aero gains.

Without having access to a dynamo data and proper car models, quantifying the effect is difficult. But the logic appears sound. There is no doubt that when Red Bull introduced the rear pull-rod with success teams will have evaluated a front pull-rod set-up as well. That only one team has adopted it suggests if there is a gain it likely is not worth the hassle.

What’s next for Ferrari?

Will Ferrari make the switch back to push-rod this year? Personally I don?óÔé¼Ôäót think so as it would be a massive admission of failure and the gain either way is minimal.

More likely is a switch back to push-rod for the 2013 car, unless the aero gains become more apparent in the re-design. Ferrari’s win in Malaysia makes things a little more interesting as the supposed mechanically disadvantaged pull-rod should not in theory yield benefit on a slippery surface.

However, the story of Ferrari?óÔé¼Ôäós victory (notwithstanding the tremendous efforts of Fernando Alonso) is in its ability to switch on the tyres in damp conditions better that its competitors, something which the Sauber appears even more adept at.

Their decision may be influenced by a desire to accommodate a Mercedes-style DRS-activated F-duct. Or that might serve as a useful excuse for abandoning the pull-rod set-up at the front of the car.

Ferrari are pinning their hopes on their May upgrade. Even if the updated packages works the Scuderia will struggle to catch up with McLaren and Red Bull as those teams have three months of experience in optimising the 2012 package and Ferrari will be starting from scratch.

Already the scene is set for a fascinating three days of testing in Ferrari’s backyard at Mugello in two months’ time.