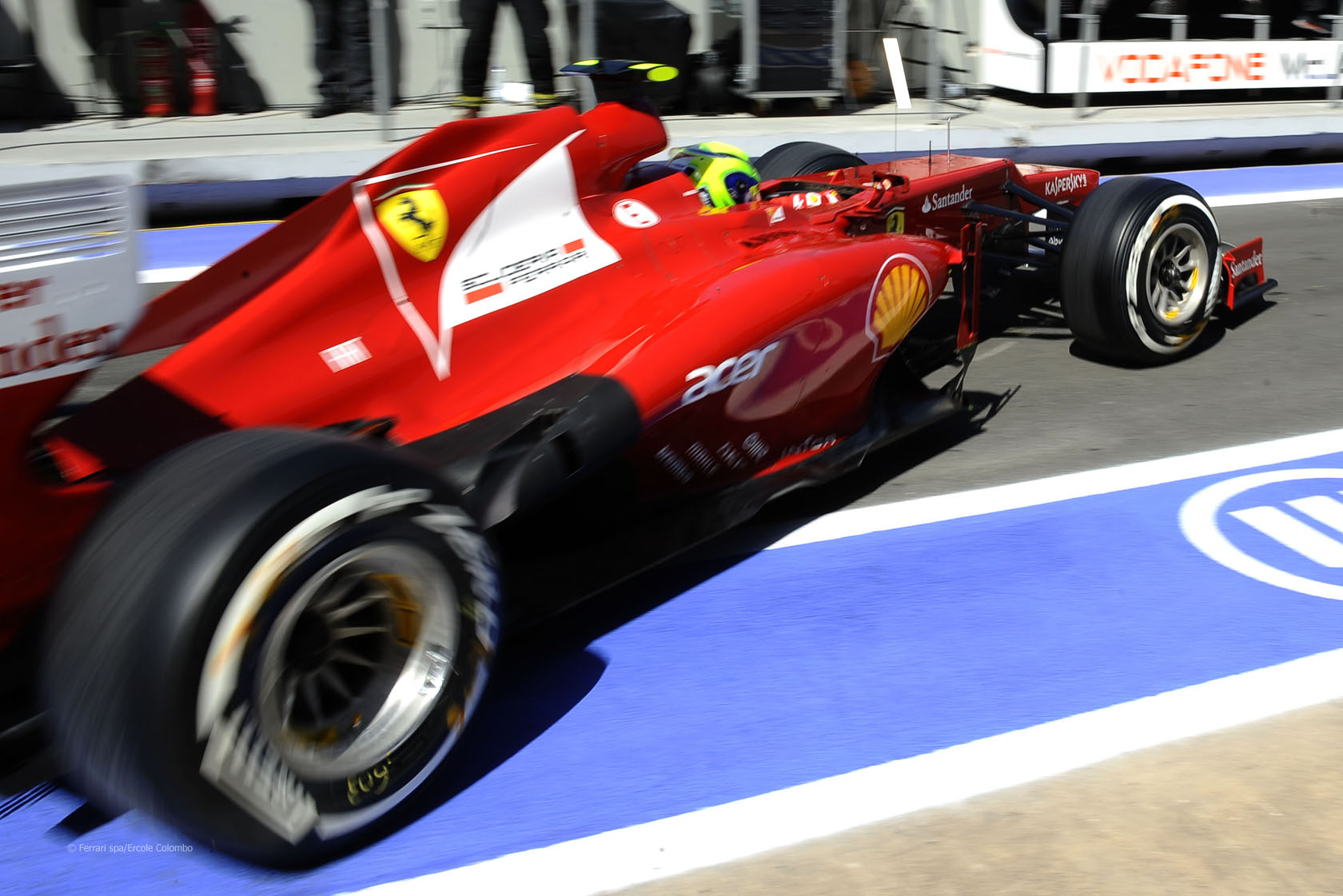 One of the defining characteristics of F1 in 2012 is how closely matched all of the teams are.

Last year Red Bull’s mastery of flexible wings and exhaust blown diffusers gave them a decisive edge. Both are subject to much stiffer regulations this year. The positioning of exhausts has been heavily restricted and there is now a much more stringent front wing flex test.

However exhaust positioning remains important, as Ferrari has shown with its 2012 car. When they first launched the F2012 its exhausts were as far to the rear as the regulations allowed (remember the ‘Acer ducts’) and pointed towards the inside of the tyres. The intention was to replicate the benefits of the exhaust blow technology from 2011 by sealing the diffuser.

Also, by placing the exhausts at the rearmost point the ‘coke bottle’ zone was crowded, making it difficult to get a consistent low pressure zone above the diffuser, which meant the car struggled for rear-end grip.

Even before the opening race Ferrari designers hunkered down in Maranello to design what was effectively a B-spec car. The biggest engineering challenge was to move the exhausts forward and de-clutter the coke-bottle area. Unfortunately this required the sidepods and radiators to redesigned, which required new crash tests.

The updated sidepods made their first appearance at the Mugello test in early May and featured conventional a conventional 2012 set-up with the exhaust exits as far forward as possible and blowing inboard towards the beam wing.

This single change improve the airflow to the coke-bottle zone and resulted in the F2012 gaining over half a second per lap. From that point Ferrari had a stable aerodynamic baseline from which to develop the exhausts further. The next sizeable upgrade came a few weeks ago in Montreal and was retained for Valencia.

The first illustration shows the latest Ferrari configuration, which is very similar to McLaren?óÔéĽÔäós original concept. The exhaust exit area is still as far forward as possible but now juts out over the sidepod undercut. This allows air to be aimed towards the outer part of the diffuser in order to replicate the 2011 blown diffuser effect.

The exhaust exit is shaped to pull the plume downwards so it bends towards the floor ?óÔéĽÔÇŁ this is called the Coanda effect (see earlier article on McLaren’s exhausts).

The other benefit of this configuration is that clean fast-flowing air sweeps around the sidepod undercut unobstructed feeding the coke bottle zone. This creates a low pressure area below the exhaust exit which further helps ?óÔéĽ?Łpull?óÔéĽÔäó the exhaust gasses towards the diffuser.

But what about the rear tyres – won?óÔéĽÔäót they still suffer from overheating? Partly ?óÔéĽÔÇŁ but the gasses are directed a little more inboard and towards the diffuser rather than the tyres so it is less of an issue.

The second illustration shows the direction of the both the exhaust gas (green arrow) and the airflow around the sidepod undercut (blue arrow). One can see how the exhaust solution is designed to ensure minimal interference between the exhaust gas and the air feeding the coke-bottle area. Red Bull use a tunnel to achieve a similar effect – the advantage of that solution is it allows more precise control of airflow.

In addition the yellow circle contains three slots carved in the floor. Not visible in the illustration are small slits from these slots to the edge of the floor. This means that the floor is one continuous surface as the slots aren?óÔéĽÔäót closed.

These allow air to seep under the floor and energise the airflow around the rear tyres and diffuser, which improves the sealing effect of the diffuser edge. Red Bull tried a similar development but with holes in the floor instead – a configuration that was ruled illegal by the FIA but not before it had appeared at several races.

It is a testament to the Maranello squad that the exhaust changes have more or less closed the performance gap to McLaren and Red Bull.

But at Valencia Red Bull introduced a revised version of its exhaust tunnel concept which appeared to give Vettel a good chunk of lap time. Unlike Silverstone, Valencia isn?óÔéĽÔäót a demanding aero circuit, so this weekend should give us a good read on how significant Red Bull?óÔéĽÔäós innovation is.

13 comments on “How Ferrari solved their exhaust problem”