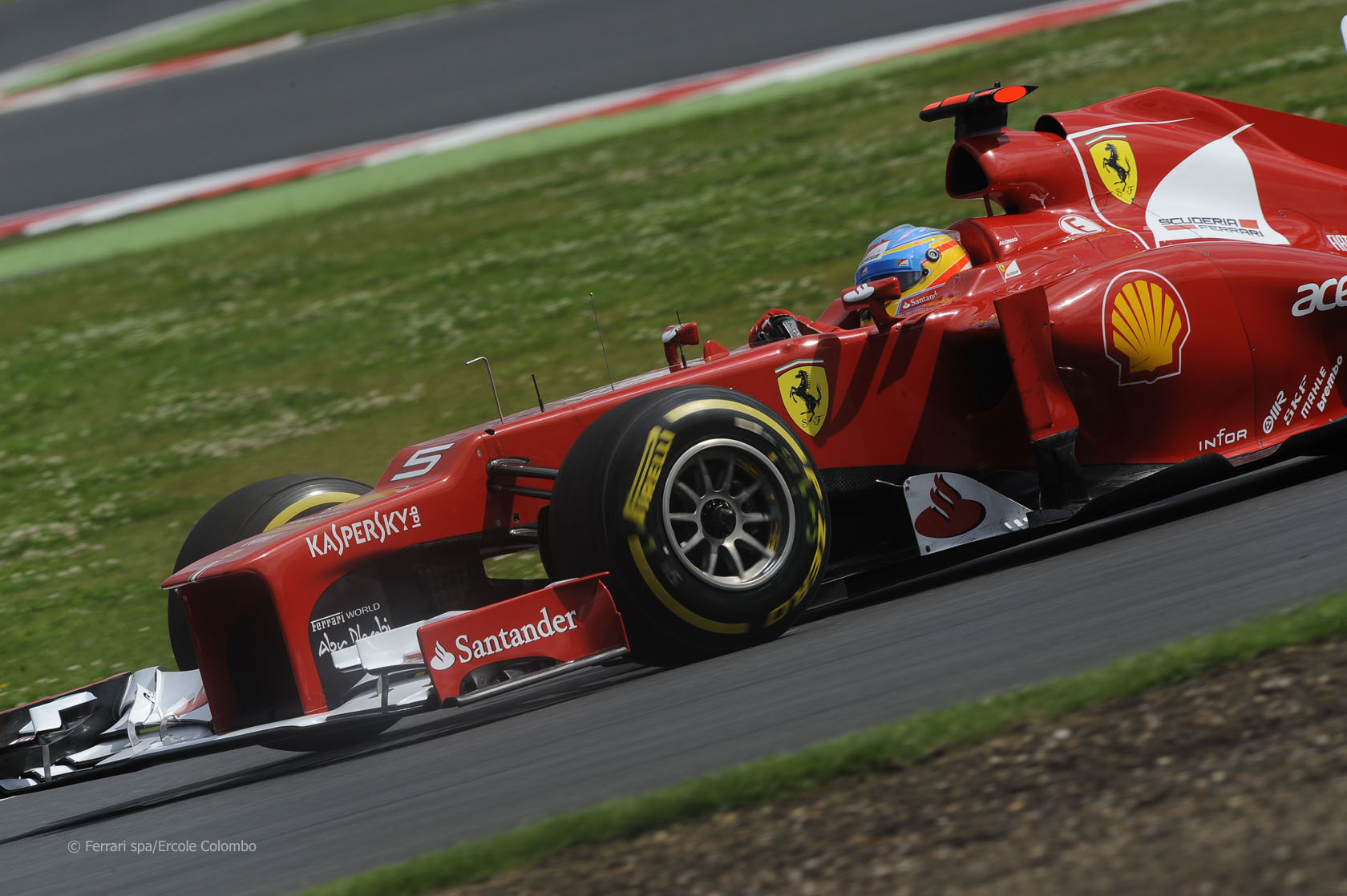 The first thing we all want to know about tomorrow’s race is whether Silverstone is finally going to get some respite from the rain, or if it’s going to be another near-flooded session.

There’s certainly going to be rain in the region tomorrow, but when it falls is critical. During the course of writing this article the hour-by-hour forecast for the area has changed from showing no rain in the two-hour period following the race’s 1pm start time to persistent rain throughout.

Last year’s race was the first at the new starting location leading into Abbey. The track was wet from earlier rain but quite dry near the starting area, so a standing start was used.

Pole sitter Mark Webber’s lead lasted only as far as the first corner as team mate Sebastian Vettel passed him from second on the grid.

F1’s starting policy in wet races has been the subject of some debate as race control increasingly prefer to use the safety car because of the danger of poor visibility.

Given a normal start, don’t expect anyone to get ahead of Fernando Alonso: he hasn’t lost a place on the first lap all year. Row three is one to watch: Felipe Massa and Kimi Raikkonen have gained 3.25 and 1.5 places on average on lap one this year.

I despair at this continued practice: If the track is not safe enough to race on why waste such a large portion of the laps? Either start it properly or red flag it so potential racing laps are not ticked off under Safety Car conditions. Whatever the conditions, teams will have to play it by ear when it comes to strategy, observing tyre wear rates as they go and making plans accordingly. This is usually the case in wet conditions and they have only had a single hour of practice on a dry track.

Whether it’s wet or dry, Alonso holds the strongest hand. His Ferrari was quickest in the dry conditions in final practice. Should it rain, he will likely be the leading from the front with the best visibility in a Safety Car start.

Practice and qualifying has given them some opportunity to assess their relative strengths and weaknesses on the intermediate and wet weather tyres in case it rains. In Lewis Hamilton’s case, he was clearly quicker on the latter. He said: “The full wets had been working really well.

“But, as the track gradually became less wet, I sought better grip and switched to the intermediates ?óÔéĽÔÇŁ but we struggled to get enough temperature into them and just couldn?óÔéĽÔäót switch them on.”

The other McLaren driver looks set to start from 16th following the penalties incurred by different drivers. Jenson Button reflected after his elimination in Q1 that at least he has plenty of fresh wet weather tyres left.

This could be a significant advantage for him if tomorrow’s race is wet: those who went on to compete in Q2 and Q3 covered quite a lot of laps.

Note that the length of the pit lane covered by the speed limit has been slightly extended, so pit stops won’t be as quick as they were last year. The position of the DRS zone remains unchanged.

Webber said he’d been held up by a Force India after qualifying. But team principal Christian Horner thought there was another reason why Webber was unfortunate not to take a second consecutive pole position at Silverstone:

“Mark was so close to getting the pole, the rain just started to increase as he was completing his lap and he dropped a couple of tenths due to the rain.”

“In the wet conditions we experienced, the lack of KERS would have cost him a couple of tenths. With the KERS functioning it could have been possible to be a position further forwards on the grid.

“That said, being on the correct tyres and crossing the line to be the last driver on a flying lap would have yielded far more time.”

Curiously, Nico Hulkenberg had the same problem as Hamilton in Q3: neither of them could find the same time improvement after switching to the intermediate, missing out on 1.8-4s of lap time gain between Q2 and Q3.

“I don?óÔéĽÔäót understand where the pace went in Q3 when I was on the intermediates because the car felt more tricky to drive and the lap time didn?óÔéĽÔäót come so easy,” said Hulkenberg.

The varying levels of water on the track make the sector times data rather hard to follow.

Some drivers were caught out at the end of Q1 by rain falling in the final sector. They included Timo Glock, who spun: “The last lap of my second run was very strong and I thought ‘Wow, we have a chance at Q2 here’.

“Then I came up to the Hangar Straight and I just saw this massive rain front ahead of me. The last sector was massively wet, whereas before it was very dry, and I thought ‘I can?óÔéĽÔäót believe it. We?óÔéĽÔäóre going to lose everything.’

“In the last two corners there was no grip and I just couldn?óÔéĽÔäót continue the pace to keep on pulling out the gap, so in the end we ended up where we normally are position-wise.”

The yellow flag following Romain Grosjean’s spin at the end of turn two appears to have had no repercussions for any of the drivers.

As always when the teams anticipate a wet race the set-ups they are using is a significant unknown quanity.

Paul di Resta said: “We actually took a bit of gamble on the qualifying session being dry and that?óÔéĽÔäós the direction we took with the set-up, but it made driving very difficult in today?óÔéĽÔäós wet conditions.

“I think some other cars went more aggressive with a full wet set-up so hopefully my gamble will come back to me tomorrow in the race.”

It’s easy to exaggerate the importance of the different between ‘wet’ and ‘dry’ set-ups. There is less of a difference between the two these days, particularly since the change in the aerodynamic rules in 2009.

Steeper wing angels for more downforce in wet conditions would be reflected in slower maximum speeds. Red Bull are at the foot of the speed trap figures although they’re usually found near the bottom at fully dry race weekends too.

Who do you think will win at Silverstone? Where can Button recover to having been eliminated in Q1?

Have your say in the comments

36 comments on “Alonso looks strongest whatever the weather does”