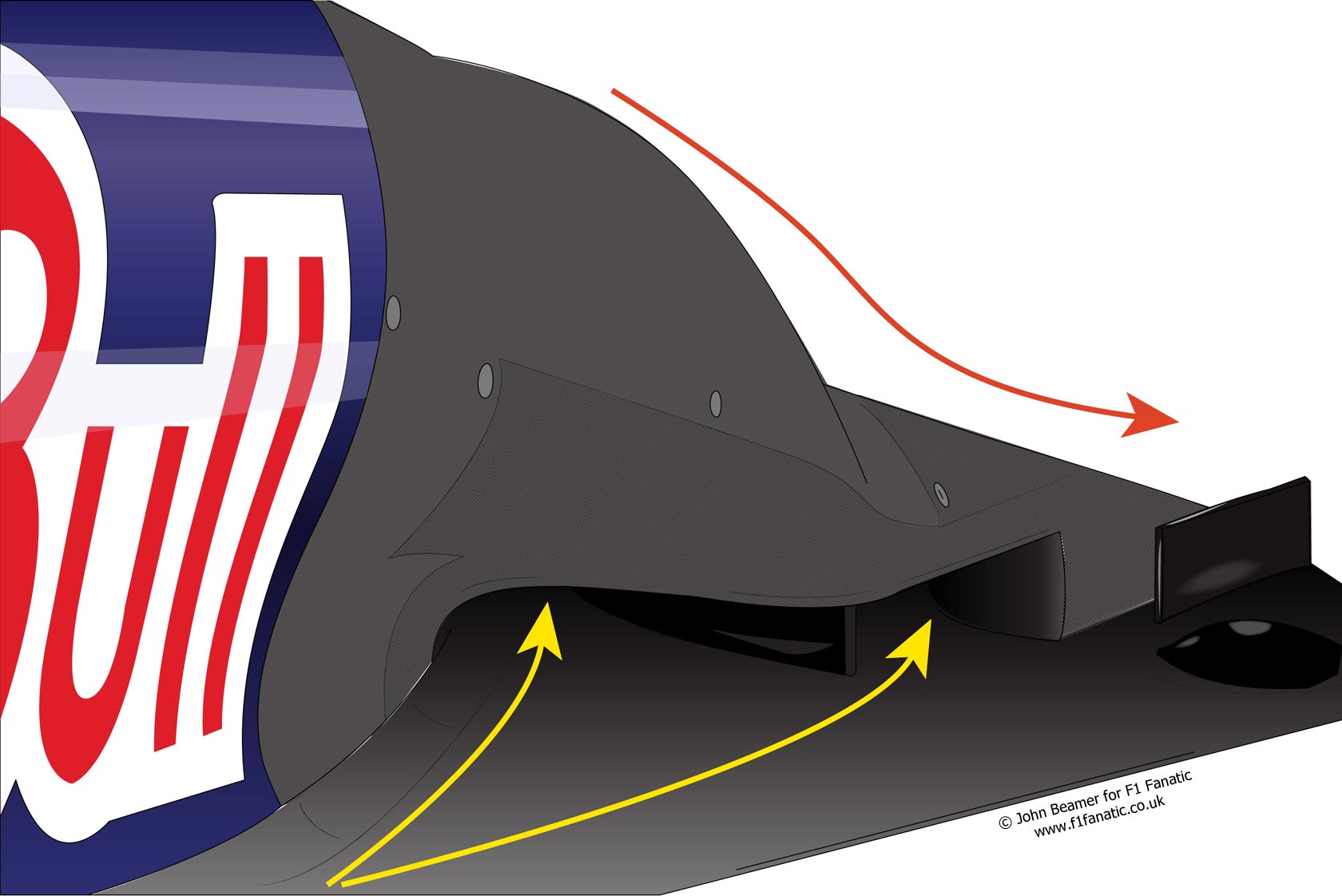 Red Bull have persevered with their sidepod bodywork which gave them a few headaches earlier in the year.

John Beamer explains how the latest version of their tunnel works.

Given the constraints of the 2012 regulations, it is clear that the optimal use of exhaust gasses is to blow them towards the outer edge of the diffuser to try to seal the diffuser from turbulent air created by the tyres.

This creates two engineering challenges given the specifics of the regulations which restricts the positioning of the exhausts.

As the exhaust exits have to be pointed 10-30 degrees upwards, the first challenge is to re-route the flow towards the floor. This isn?óÔéĽÔäót too difficult to achieve ?óÔéĽÔÇŁ by using cleverly-shaped bodywork it is possible to exert some control on the direction of the exhaust gasses.

The second problem is to ensure that as the exhaust gasses are dragged downwards the airflow around the sidepods isn’t affected in a negative way.

Ensuring that this airflow is funneled to the coke-bottle zone is a critical element of ensuring the diffuser works efficiently. This is because fast airflow over the rear of the car creates a low pressure zone above the diffuser exit and reduces the risk of airflow separation in the diffuser.

There are two solutions to the second problem. The first is the McLaren approach (which Ferrari adopted and McLaren introduced a further refinement of in Germany) whereby the exhausts jut out over the sidepod undercut so as not to interfere with the airflow.

The tunnel seen on the Red Bull RB8 is another approach. It first appeared during the final pre-season test and can be seen in this earlier illustration:

The original tunnel was very square. Air entering the tunnel was at speed was forced back out as evidenced by Red Bull’s flow-vis tests.

The team abandoned this construction and went back to an earlier version of the sidepod/exhaust configuration. But thry did not give up on the concept and introduced a second version at Valencia:

There are a few obvious changes. The tunnel is larger and more rounded to ensure that the airflow doesn’t spill back out.

It also splits into two channels. The second, which can be seen just behind the first and closer to the rear of the sidepod, is smaller and slightly less rounded. Also there is no clear exit visible for either tunnel, unlike in the original version where the exit could be seen. The third illustration shows a close-up of the two tunnels. Their different sizes and shapes are clearly visible. The key question is why are there two tunnels and where do they exit?

Air which enters the larger front tunnel exits inside the sidepod where it joins the air from the radiators and ultimately exits through a duct at the back of the car ?óÔéĽÔÇŁ there is no aerodynamic benefit from this.

The second tunnel is fully ducted and blow into the hole for the engine’s starter motor, which is situated at the front of the diffuser. The benefit is that the high velocity air from the sidepod undercuts is channeled to where it is most effective.

This produce downforce and by directing the airflow in this precise fashion the downforce produced is more consistent, fixing a problem Sebastian Vettel complained about in earlier races.

The overall benefit from getting the exhausts to seal the outer edges of the diffuser is estimated to be two to three tenths of a second per lap, depending on the circuit.

There is debate as to whether the Red Bull or McLaren-style solution is more effective. Given how close the cars are in performance there doesn?óÔéĽÔäót seem to be much in it.

However, what is apparent is that small tweaks in the sidepod/exhaust area can have a significant effect on performance ?óÔéĽÔÇŁ witness McLaren?óÔéĽÔäós resurgence in form since they introduced more deeply undercut sidepods in Germany. We can expect this area to remain a key focus of development during the rest of the season.