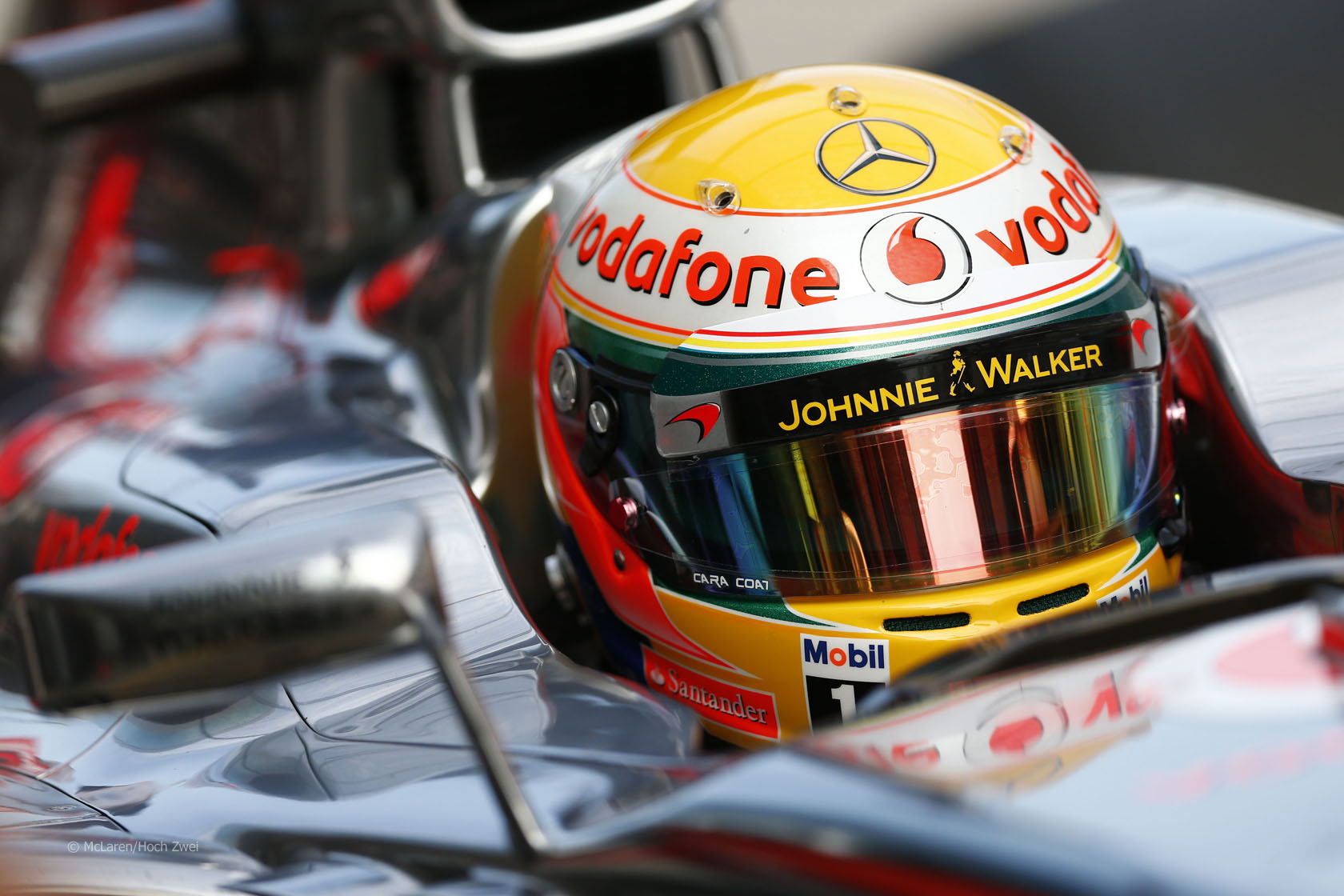 Guest writer @John-Beamer looks at how Mercedes lost their way in 2012 and could bounce back this year.

Lewis Hamilton’s move to Mercedes for 2013 has attracted widespread comment and speculation.

He has been quick to play down the team’s chances this year, leading many to speculate that they are throwing all their resources at the change of engine regulations for 2014.

This doesn’t seem an unreasonable view. Mercedes ended 2012 with an uncompetitive car, the technical regulations are much the same this year and the technical structure at Brackley has undergone considerable changes which are yet to bear fruit.

But a closer look suggests there are reasons to expect Mercedes could surprise with their performance this year.

Mercedes began 2012 with a very competitive car. The W03 looked strong in testing, won the Chinese Grand Prix comfortably and was the quickest car in qualifying in Monaco.

Mercedes’ average grid position in the first half of the year was 3.8. In the second half of the season it rose to 9.2 which illustrates how the Brackley-based team was out-developed by its rivals.

We’ve this trend before from the same team. In 2009, when it was Brawn, the BGP-001 was unbeatable for the first half of the season. But after other teams, notably Red Bull, bolted double diffusers on their cars Brawn began to struggle.

At the time it was put down to their lack of resources following the departure of Honda. But Mercedes’ development rate in the three subsequent seasons shows signs of a similar pattern. In 2012 their development problems stemmed from the decision to focus on Double DRS (DDRS) and passive F-duct systems.

Mercedes stated to experiment with a passively stalled front wing at the end of 2011 so the team made a commitment to the device early.

In 2012 that they hooked it up to the DRS. Initially the system was seen as a boon, especially in qualifying. However, by the mid-point of the season it was clear the device hindered performance.

The main issue was one of flow reattachment. DDRS on the Mercedes worked by feeding air from a small inlet to a slit in the underside of the front wing when DRS was activated. This stalled the front wing by disrupting the airflow. If the front wing doesn?óÔéĽÔäót work it also disrupts the airflow towards the rear of the car ?óÔéĽÔÇŁ the diffuser will also stall too, further reducing drag and downforce.

This increased the speed boost when used on straights. But when the DRS is closed it takes time for the air to reattach to the front wing ?óÔéĽÔÇŁ at a minimum a few milliseconds are required once the DRS is shut for the front wing to ‘switch on’ again.

When the front wing flow is reattached the flow at the rear of the car still needs to harmonise with the new flow regime. The consequences of delayed reattachment aren?óÔéĽÔäót good: corner-entry understeer being top of the list. Mercedes tried to ameliorate that, leading to set-up changes which forced compromises elsewhere.

In addition installing DDRS or a passive F-duct requires design compromises to some of the aerodynamic surfaces of the wing. The underside of the wing was contoured slightly differently to try to get it to reattach air faster. Similarly the inlet holes cause design compromises with the rear wing.

Mercedes also played around with a passive F-duct – as did Lotus. This device is similar to DDRS except that is ‘switched on’ automatically when the car reaches a certain speed. Faster air causes low pressure so it is possible to harness to effect to create a fluid switch.

The passive F-duct presents problems with flow reattachment and tuning. The switch ‘on’ and ‘off’ speeds can vary: for example, at circuits with high-speed corners the ‘switch on’ speed must be set quite high to avoid it activating mid-corner. Therefore the benefit is lessened.

There is little question that the focus on DDRS and the passive F-duct diverted valuable resources away from other aerodynamic development ?óÔéĽÔÇŁ particularly the Coanda exhausts, where it turned out there was more lap time to be found.

It is not the case that their ideas were flawed. A key part of Red Bull’s late-season gains was down to the addition of a DDRS to their RB8. However theirs stalled the beam wing rather than the front of the car. This simpler system was a lot more effective and suffered less from reattachment issues. The technical rules have changed little over the winter. The banning of unlimited DRS in qualifying is one of few significant changes, and is likely to work against some of Mercedes’ rivals, notably Red Bull.

In periods of rules stability designs tend to converge as teams adopt each others’ ideas. That is particularly true at the moment as the rules are more restrictive than they’ve ever been.

As the scope for major breakthroughs is lessened, teams are increasingly involved in an exercise of iterating and fine tuning existing concepts. The teams who have faster cars to start with are more likely to stay ahead providing they can sustain the development rate.

One year after the 2012 exhaust restrictions, teams will have observed what works from 2012 but have plenty of scope to tailor the design of the car to take advantage of the regulations. This means that while 2012 platforms are a great starting point for the likes of Red Bull, McLaren and Lotus there will be a bit more ‘revolution’ than there would be in a third year of rules stability.

As we saw in 2012, teams may find good chunks of time through reasonably simple changes (e.g., new exhausts or front wing upgrade). So it should be possible for a team to go from being off the pace to challenging for race wins providing they have the resources – as Mercedes undoubtedly do.

Mercedes should be able to exploit the stability in the rules to their advantage. But the likes of Red Bull and McLaren have better starting points with their 2012 chassis.

Mercedes have made several changes to their technical team to expand and strengthen it. Over the last 18 months Ross Brawn has hired Bob Bell, Geoff Willis, Aldo Costa and Mark Elliot ?óÔéĽÔÇŁ all senior figures.

An obvious potential problem is that with so many heavy hitters in the technical team lines of accountability may become blurred. While Elliot?óÔéĽÔäós role as head of aerodynamics is straightforward, Willis, Costa and Bell are all in some sort of technical director capacity and it is unclear who has overall responsibility for the technical vision of the car.

Over at the team everyone is trying to beat – Red Bull – there is no mistaking that Adrian Newey in the man in charge on the technical side. The same isn?óÔéĽÔäót obviously the case with Mercedes.

In addition to hiring people there has been a significant upgrade is technology and systems. Geoff Willis led a programme to upgrade the wind tunnel to 60% (from 50%), which should give more accurate data on tyre modelling.

This is a significant undertaking ?óÔéĽÔÇŁ as attested at Ferrari who continue to suffer significant wind tunnel-to-track correlation issues. Although it will be a long-term benefit it isn’t guaranteed that the wind tunnel correlation will be perfect from the off. If not this will hamper development efforts and could turn 2013 into a long year for the Brackley team.

The departure of Norbert Haug one month ago showed the team expects greater success then one race win in three years. The arrival of Hamilton is further proof of that.

It is a few weeks before the 2013 cars are revealed but reading the media it is possible to pick up a few clues as to where Mercedes will focus its 2013 efforts.

First off it is apparent, despite the above, that the passive F-duct approach hasn?óÔéĽÔäót been abandoned. However I do not expect it to be a significant feature of the car.

The majority of Mercedes?óÔéĽÔäó efforts will be on getting the rear end right. There are two components: using the exhaust gasses properly – something they never really got a handle on in 2012 – and maximising airflow over the diffuser through smart component packaging and heavy sidepod undercuts.

There are rumours Mercedes has developed a ultra-small gearbox, copying Williams. I expect a few teams to go down this route as it is an obvious way to reduce blockage at the rear of the car. The challenge with a small gearbox is that the drive shafts are more steeply angled which reduces power transmitted to the wheels. But the evidence from Williams suggests this conundrum is solvable.

In addition it is thought that Mercedes will copy the Red Bull exhausts with ducting at the rear to better direct the exhaust flow. The jury is still out on whether the McLaren or Red Bull exhaust solution is best, but Mercedes struggled to emulate McLaren’s Coanda solution last year.

And then there is the Hamilton factor. How much of the potential of the W01, W02 and W03 did Michael Schumacher and Nico Rosberg extract – and will Hamilton do better? At minimum Mercedes should stand to regain the position they lost to Lotus during 2012. I suspect they will be challenging Ferrari for third fastest car on the grid and could be in the mix for podiums and the odd race win.

That raises the question as to what point Mercedes should divert their focus from 2013 to 2014. This will be a critical decision for every team this year.

The new engine formula for 2014 favours factory-backed teams as they can work with the engine manufacturer to fine-tune the engine over the course of the season. Customer teams will have less opportunity to do this and engine optimisation will be worth a lot of lap time early on.

Although the engine formula is the most radical change it will inevitably have consequences for aerodynamics. The V6 has different packaging needs to the current V8 and in addition there will be some (minor) changes to front wing width and nose height. Given how important front wing end plates are to aerodynamic performance a substantial amount of work will be required to optimise the tyre-wing interaction.

If Mercedes have a top-three car in 2013 and demonstrate they can develop through the season then there is every reason to be positive for 2014. If the W04 is off the pace come April expect the team to write off 2013 and plough their efforts into next year. A tactic which served them very well during 2009.

46 comments on “Why Hamilton and Mercedes could surprise in 2013”