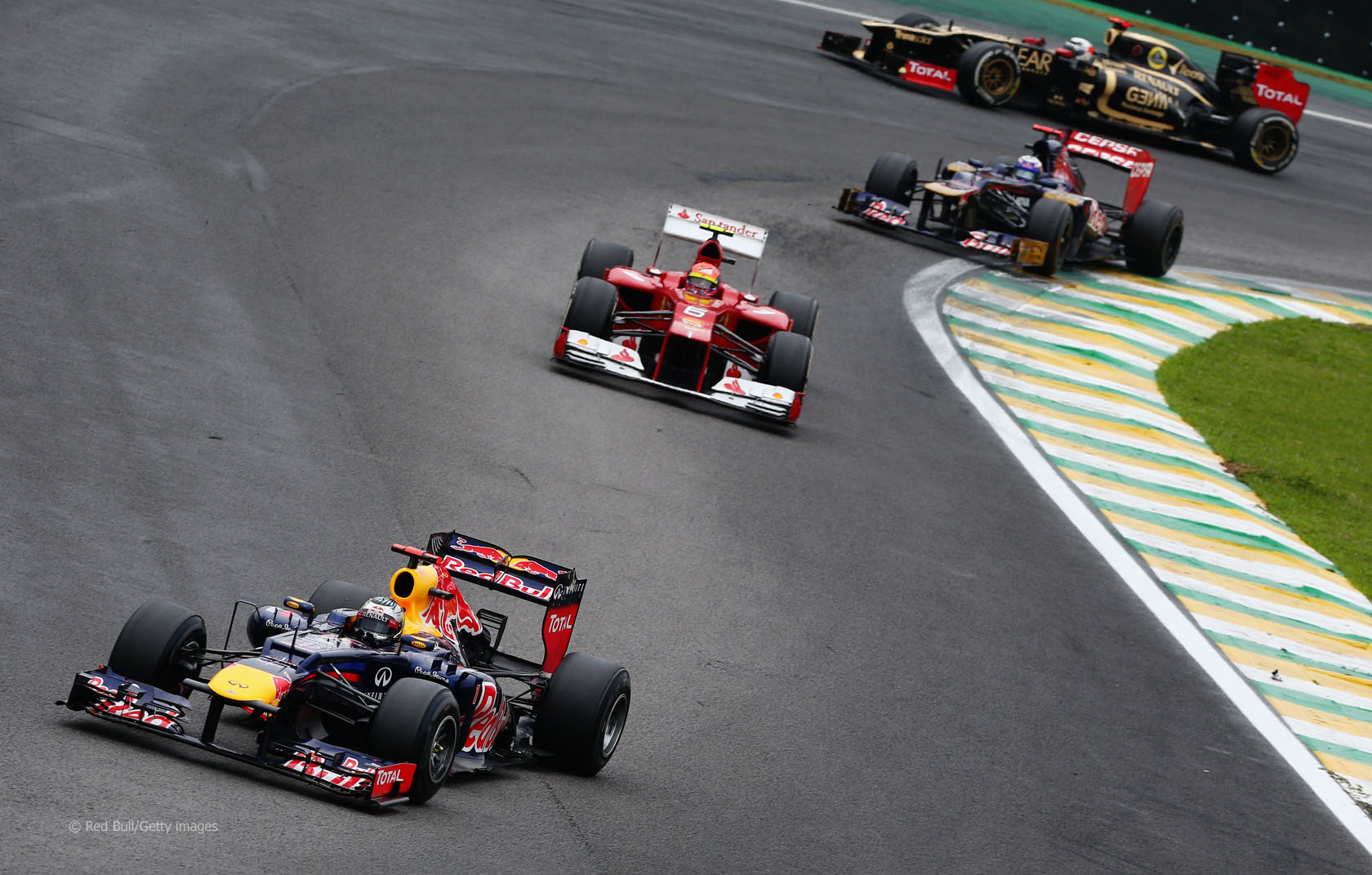 F1 Fanatic first invited readers to Rate the Race at the beginning of the 2008 F1 season.

One hundred races later, which did you consider the best – and worst – of them? Here’s the list in full:

It’s no surprise to see which race is still propping up the list: Over a third of readers gave the 2010 German Grand Prix the lowest rating available.

The reason for this is abundantly clear if you scan the comments left after it. Ferrari’s imposition of team orders, instructing Felipe Massa to let Fernando Alonso past so he could win and help his championship chances, was greeted with condemnation from fans who viewed it as unsporting.

F1 has undergone many changes in recent years designed to make racing more entertaining. But despite the outcry against the manner in which this race was manipulated, the FIA chose to scrap its ban on team orders rather than enforce it. As recent events have shown, team orders is still a contentious and divisive subject in F1.

The unloved Valencia street circuit has four races inside the bottom 20. But every dog has its day – last year’s race, which saw a remarkable win for Alonso, is in the top five. Ironically, that may prove to have been its last event.

The 2010 race, won by Sebastian Vettel, was marred by a huge crash for Mark Webber which caused the appearance of the Safety Car.

This led to Lewis Hamilton being given a drive-through penalty for passing the Safety Car, though he was still able to finish ahead of Alonso, much to the Ferrari driver’s chagrin. Nine other drivers were given penalties for going too quickly while the Safety Car was out.

The Buddh International Circuit is one of the newest additions to the F1 calendar and India’s round of the world championship has been well-received by those in the paddock.

But the first two races were uninspiring affairs: so much so Vettel remains the only driver to have led a racing lap at the track.

He arrived at India’s inaugural Grand Prix with the 2011 title already in his pocket. Vettel went on to achieve his first ever ‘grand slam’ in the race – winning from pole position, leading every lap and setting fastest lap. He also set a new record for leading the most laps during a season at this point. Would the inaugural Singapore Grand Prix have got a different rating had everyone known at the team the true details of the manner in which it had been won? We’ll never know.

Alonso’s first win of the year for Renault looked extremely unlikely at the start of the race as he lined up 15th on the grid. But an early pit stop and what seemed to be a fortuitously-timed crash by Nelson Piquet Jnr propelled him into first place and a shock victory.

But 12 months later the truth came out: his team mate had crashed on purpose as part of a scheme to help Alonso win. The revelation shook the sport and led to the expulsion of Flavio Briatore and Pat Symonds from Renault’s F1 team. But at the time few suspected anything was amiss.

The rain-soaked 2009 Chinese Grand Prix was out first experience of something which has become very familiar: Red Bull winning. All of their 37 victories have occurred within the last 80 races.

The opening stages of the race were run behind the Safety Car due to the dreadful conditions.

Korea’s first F1 race was blighted by a heavy downpour not to mention the poor state of the track, which still had a rather unfinished look.

But the tension crackled as five drivers went into the third-to-last race of the year still able to win the championship. The race was a disaster for Red Bull as Webber crashed out, losing the points lead to Alonso.

Vettel retired from the lead late in the race leaving him fourth in the standings with two races to go and seemingly out of contention. An uninspiring venue had produced a dramatic twist in the title race.

Another controversial one. F1 Fanatic readers raved about this race as the chequered flag fell on a dramatic Belgian Grand Prix which had seen Hamilton and Kimi Raikkonen scrapping furiously for victory. Hamilton prevailed while Raikkonen crashed out.

But hours after the race the stewards took Hamilton’s win from him and gave it to Massa, claiming Hamilton had gained advantage by going off the track while racing Raikkonen despite having let the Ferrari driver past.

The stewards’ interference was roundly condemned by F1 Fanatic readers but McLaren’s attempts to overturn the verdict came to naught.

The Red Bull and McLaren drivers were nose-to-tail at the head of the field for lap after lap in a tense Turkish Grand Prix in 2011.

It all came to a head on lap 40. Vettel tried to prise the lead off his team mate but the pair made contact, Vettel spinning out of the race, Webber limping into the pits with damage.

That left the two McLaren drivers at the head of the field and for a while it looked like they were going to take each other off as well. While the team urged their drivers to save fuel Button attacked and passed Hamilton for the lead, only for his team mate to forcibly take the position back again.

When F1 team bosses asked Pirelli to help make better racing from 2011, this is the race they used as a reference. And they couldn’t have done much better in terms of choosing a popular race which didn’t have the benefit of rain or a championship contest to enliven proceedings.

Bridgestone’s usually conservative choice of tyre compounds were disturbed by the low-grip properties of the Circuit Gilles Villeneuve. It resulted in unpredictable tyre behaviour which produced a stunning race in which Hamilton and Alonso fought hard for the lead.

It’s served as a blueprint for the kind of racing F1 has been trying to recreate since the beginning of 2011. But whether that kind of spectacle remains entertaining when it’s the same thing week in, week out is a point which has attracted much debate.

The spellbinding conclusion to the 2008 season was the highest-rated race for three years on F1 Fanatic. But it’s been pushed down six places by races from the last two seasons.

Massa faced little opposition in his drive to victory but behind him Hamilton’s struggles saw the destiny of the championship switch between the pair twice in the last three laps.

It all came about due to a late rain shower in which most drivers – with the significant exception of the two Toyotas – switched to intermediate tyres. Hamilton dropped a place behind Timo Glock then was sensationally passed by Vettel’s Toro Rosso, seemingly handing the title to Massa.

But the rain intensified and both Toyotas slowed on the final lap. Hamilton famously passed Glock at the final corner, denying Massa the championship in a moment of pure drama. There is a widely-held view, expressed from time to time in the comments, that Vettel has dominated F1 since 2010. Where that’s true or not it didn’t negatively affect people’s enjoyment of the race which saw him crowned champion for the third year in a row.

Four years after the stunning 2008 season finale, Vettel secured his third world championship in circumstances in a race that was every bit as tense as Hamilton’s triumph – perhaps more so.

Holding a 13-point lead over Alonso going into the race, Vettel’s position looked strong. But disaster struck on the first lap: he was knocked into a spin, damaged his exhaust and fell to the back of the field. However he recovered swiftly, moving up to sixth by lap eight which put him in position to clinch the title.

The championship fight was just one dimension to this thrilling race. A battle for the lead developed between the two McLaren drivers (in their last race as team mates) and – surprisingly – Nico Hulkenberg’s Force India. Button prevailed after Hamilton and Hulkenberg collided.

The rain worsened in the final laps and when Paul di Resta crashed the Safety Car came out. The race ended with the field neutralised and Vettel a relieved champion.

What your favourite – and least favourite – of the last 100 races? Have your say in the comments.