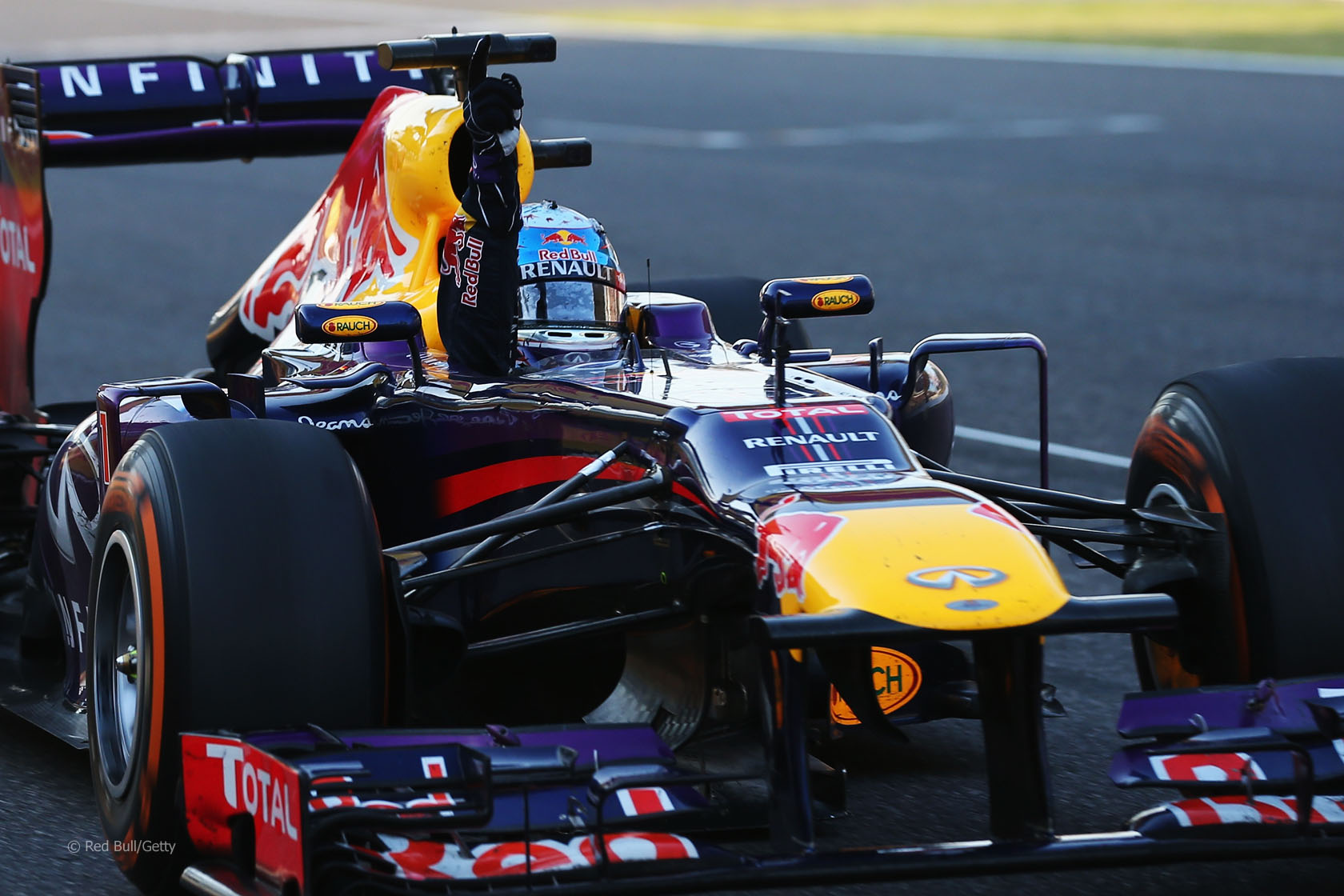 Heading into the summer break Sebastian Vettel had a handy lead in the championship but there was little indication he was about to end the year with a record-matching nine wins in a row.

Consistent top four finishes in the opening rounds had allowed him to open up a margin to the chasing pack. But there were some small signs Red Bull had found an advantage.

Vettel won emphatically in Canada – not a strong track for the team in previous years. At Silverstone his gearbox failed while he was leading, without which he would have scored three wins in a row.

But after the August holiday, through a combination of the new tyre compounds and Red Bull continued development of the RB9, Vettel had the means to achieve an almost unprecedented feat in Formula One history. That he capitalised on that advantage so effectively makes him a clear choice as driver of the year.

It’s easy to gloss over the details of his incredible run of nine consecutive wins which began in Belgium. Such as the care he had to take in Italy to nurse a damaged tyre in the first stint and an ailing gearbox in the second.

At Suzuka he almost beat Webber to pole position despite his KERS not working. In the race his irresistible speed meant his team mate would have struggled to contain him whichever strategies they had been on.

In Brazil wet weather conditions were supposed to give his rivals a chance to get on terms with them. Instead he comfortably took pole position and was over a second quicker than Webber.

The sheer scale of Vettel’s superiority over his team mate this year underlines how strong his season was. He never finished a race behind Webber, was only beaten on merit in qualifying once and took almost twice as many points.

The defining moment of the season in terms of their relationship was, of course, in Malaysia, where Vettel disregarded the infamous “Multi 21” instruction – an order for him to hold position behind Webber. Vettel had lost the initiative to his team mate early in the race by pitting too soon to switch from intermediate to slick tyres on a drying track.

One week earlier in Australia Vettel had started the race from pole position but fallen behind Fernando Alonso and Kimi Raikkonen as the Red Bull proved tougher on its tyres. A challenging season appeared to lie ahead, and a driver who has won two world championships by less than seven points was never going to pass them up again just to placate his team mate.

There were other occasions when Vettel railed against the constraints imposed on him by the early 2013 tyres. Spain was a repeat of Australia. Then in Monaco he took a temporary break from nursing his tyres in second place to set the fastest lap of the race for “satisfaction”.

The fragility of the tyres in the first half of the year seemed to be the only thing that gave Vettel’s rivals a chance to catch him – no wonder a fierce off-track battle was fought trying to influence Pirelli’s decisions.

Vettel’s best win of the year came at another venue where he was yet to taste victory. Despite an intermittent KERS glitch he resisted a twin-pronged attack from Lotus to take his first F1 victory on home ground.

How the rankings are produced

This is a ranking of how drivers have performed in the 2013 season, irrespective of their form in previous years. Among the data referred to in producing the rankings are notes on each driver’s performance at each race weekend, compiled data on car performance, direct comparisons between team mates and each driver’s form guide.

How highly do you rate the drivers who’ve appeared so far in the rankings? Give your views on them in the comments.

You can also vote for your driver of the year here: