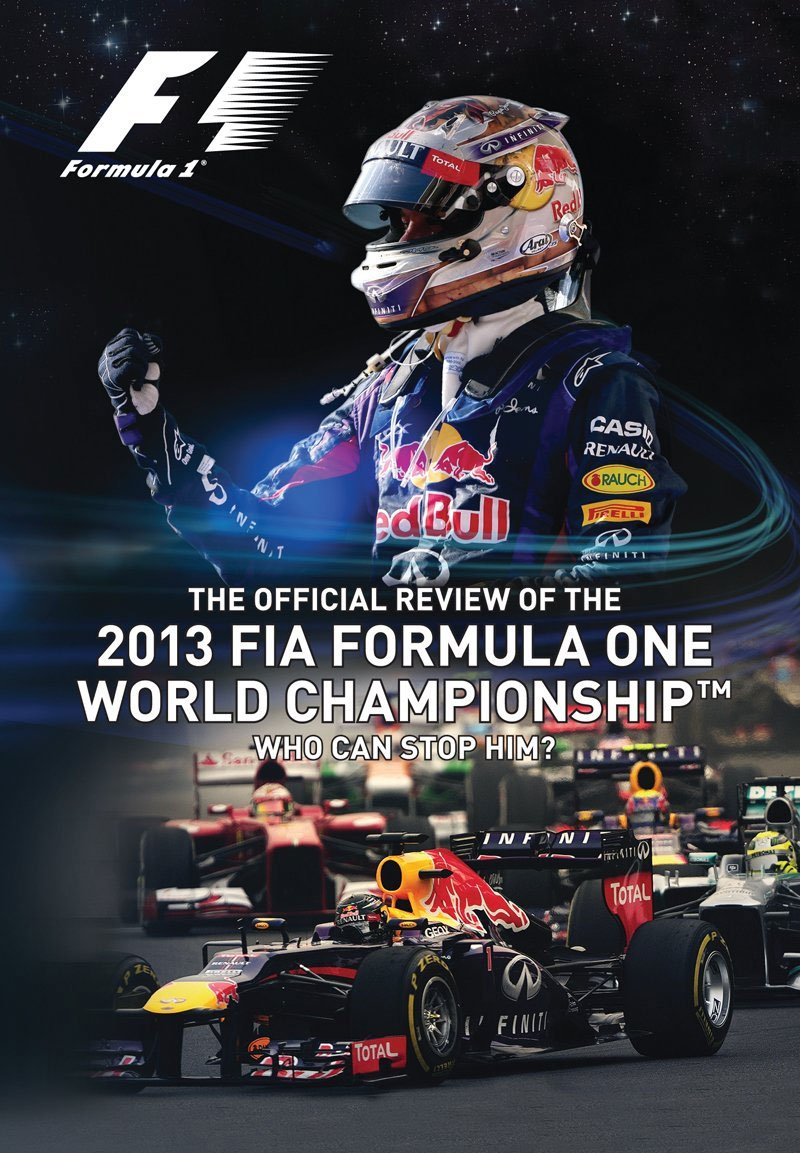 The 2013 edition of the official Formula One season review video comes courtesy of the fifth different publisher in seven years.

Having toured 2 Entertain, Lionsgate, Universal and Metrodome it has now returned to Duke Video, who last published it in 2007 and was responsible for most of the official reviews since the first one was published by FOCA in 1981.

Despite the changes the structure of the video is familiar from recent additions. But the 2013 DVD review – titled Who Can Stop Him? – is a significant improvement in several respects.

The 2012 DVD suffered from a lack of context and link material between each race. This has been remedied for the 2013 edition, with an introductory sequence on testing and more detail on events surrounding each grand prix.

Despite this the entire review is still fits onto a single DVD with a three-and-a-half hour run-time. This has been achieved by jettisoning the DVD extras which appeared last year, most of which were surplus to requirements anyway. It was definitely a trade-off worth making.

Another improvement over last year is that the 2013 review appeared in time for the all-important Christmas market (though not quite soon enough to be reviewed here earlier). This was not the case for the Blu-Ray, though that will get the missing extras when it appears in the new year. The biggest drawback this review faces compared to last year is that there wasn’t as much excitement on-track this season. This year’s average race rating by F1 Fanatic readers was 9% down on last year.

That is certainly reflected in the review, which at times feels like a dull montage of pit stops, unremarkable DRS passes and footage of Sebastian Vettel spraying champagne.

Matters aren’t improved by the voiceover which, despite being provided by Ben Edwards, lacks colour. This is not something you could say of his lively BBC F1 commentaries. It is partly symptom of this being a post-season review, not a live event, and therefore deprived of the immediate drama that usually makes sport so compelling.

As earlier reviews have shown, the solution to this is not to attempt to recreate as-live commentary – a flawed idea which was thankfully scrapped after 2007. It may be wishful thinking to yearn for a return to the humour of the Clive James era reviews (1982/1984/1986) but Edwards at least needs a script with a bit of life in it. And one which doesn’t keep confusing whether drivers are referred to by their first names or surnames.

The highlights themselves leave you wanting for little. FOM’s footage is of a reliably high standard and were boosted this year by innovations such as the infra-red camera (which gives a great view of Paul di Resta’s Monza crash) and the belated introduction of rotating onboard cameras. Both feature in the video.

At times the direction is decidedly by-the-numbers. Too many times we cut from a spin or crash to a view of a driver’s partner hiding their head in their hands. And those grating and gratuitous celebrity shots should also have been left on the cutting room floor. But this accounts for a tiny proportion of the total run time.

A reasonable amount of attention has been paid to highlighting the major stories away from the sharp end of the field, such as Nico Hulkenberg’s superb drive in Korea. But the likes of Caterham and Marussia are too often neglected, and the technical side of the sport is rather overlooked too.

Copious use of team radio adds much-needed colour to the coverage as well and a few new clips appear. One of them, from Jonathan Eddolls to Valtteri Bottas moments after his superb pass on Esteban Gutierrez at the Circuit of the Americas, says a lot about the state of F1 at the moment: “Great move, but we really need to manage pace…”

The use of subtitles to clarify what’s being said are welcome, but they are absent from the one piece of radio that would benefit most from from them: Fernando Alonso’s angry address to his team during qualifying at Monza. Amusingly, Ferrari’s claim Alonso was “praising” them, rather than calling them “idiots”, is put forward as a serious interpretation, though only the most guileless are going to be fooled by that.

Some of the more memorable radio moments from the year are missing entirely – Felipe Massa’s furious reaction to his penalty in Brazil, for example. But repercussions of the Malaysian Grand Prix for Red Bull and Mercedes get a very thorough treatment, including some new team radio clips from previous seasons which should have been included on those reviews.

The Mercedes tyre test row is also covered along with other major news stories from the year, including the deaths of Canadian marshal Mark Robinson and former Marussia test driver Maria de Villota.

The official 2013 season review DVD does a comprehensive, competent and at times quite entertaining job of packaging a less than stellar season into a review. I await the Blu-Ray edition with interest to see if it can add enough to it to earn top marks. More team radio, onboard camera laps and an alternative commentary track by Clive James are my three wishes.