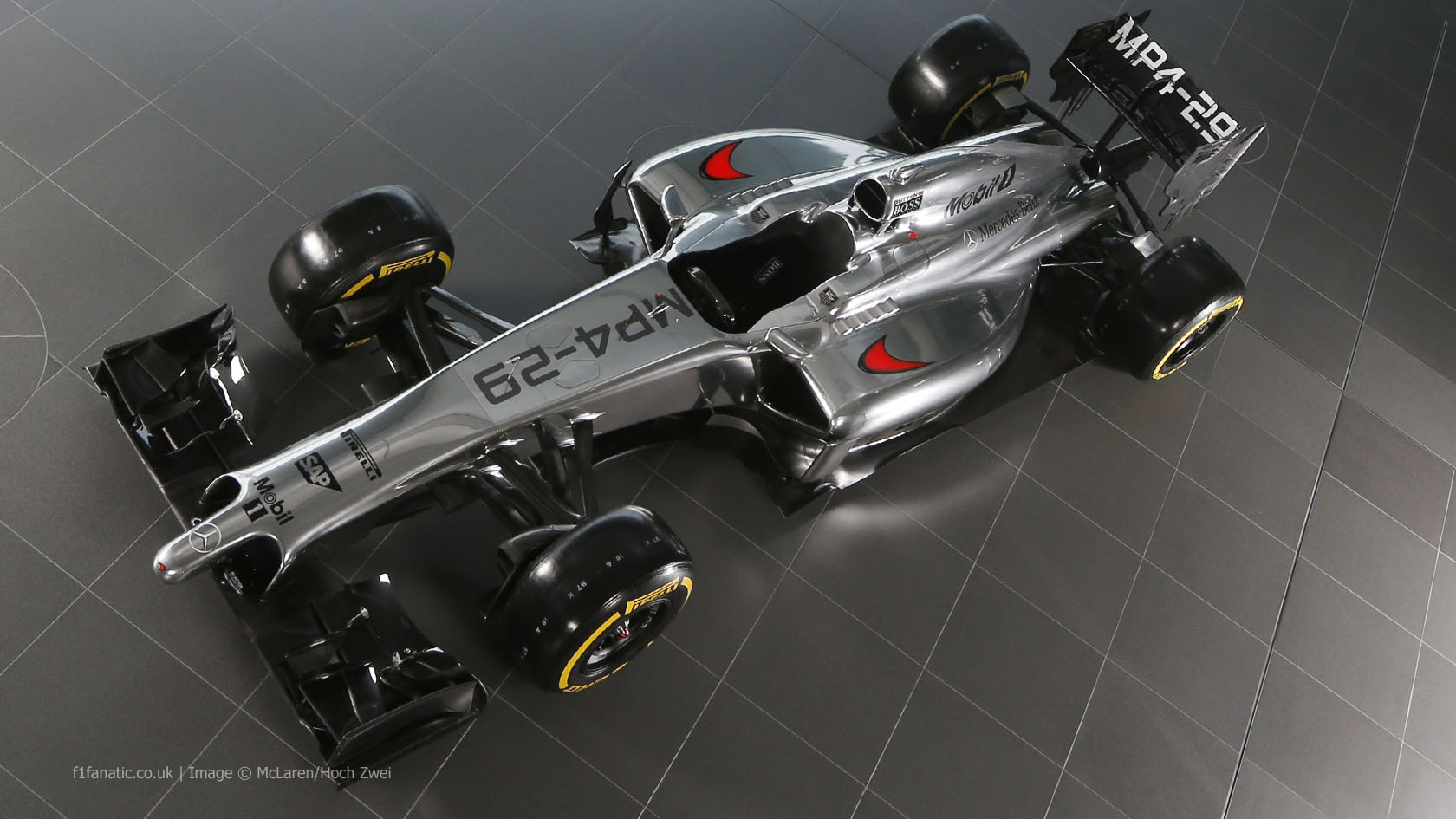 The first test in Jerez starts tomorrow and already we have seen renderings or photos of the cars from half the teams on the grid.

The splashy launches of yesteryear have given way to online reveals and renderings, but these still give us insight into some of the major changes to car design that this year will bring.

Ever since the 2014 technical regulations were released last year there, there has been much speculation about the look of the noses. In recent years aerodynamicists have been trying to get the nose of the car as far from the ground as possible. This maximises airflow under the car, which is then used to feed the floor and channel round the sidepods – both which help the diffuser.

The reason why the FIA has mandated lower noses is safety – the belief is that higher nose cars may flip more often (recall Webber in Valencia a couple of years ago) and if they ‘jump’ after contact then the nose may spear a fellow driver in the ensuring melee.

So for 2014 the FIA as ruled that noses much now conform to a minimum height and cross-section area. The final 50mm of the nose must be lower than 185mm from the car’s floor (this is called the reference plane). Also the tip of the nose must have a (single) cross-section areas of 9000 square mm. In addition the nose section must stay below a diagonal line drawn from 625mm at the front bulkhead (where the driver’s feet are) to 300mm at the nose tip. There are no further restrictions on nose design, which has allowed designers to be reasonably creative. So far we’ve seen three different solutions and there may be more to come.

McLaren and Williams have gone with the finger nose. This is a skinny, protruding proboscis then ends in an oval tip. The McLaren implementation is quite clever in that the front wing pylons are integrated into the nose cone, and then the whole structure swoops neatly to the cockpit. The intent of this is to reduce the amount of air blockage at the front to try to get as much flow as possible under the car.

Lotus’ E22 sports an innovative double-tusk nose. Two tusks, around 15cm apart, protrude from the chassis and form the front wing pylons and crash structure. The area between the tusks up to the front bulkhead is missing. The rules are very clear in that the tip of the nose must have a single cross-section and the canny folk at Lotus have made one of the tusks slightly longer than the other to comply with the rules. By removing most of the nose cone and integrating the structure directly in to the front wing pylons then there are fewer blockages to airflow under the car. Ferrari has gone with an altogether different concept on it F14 T. The nose of the car swoops down from the bulkhead and splays out to form a shallow letterbox against the front wing. There is no ‘nose tip’ to speak of. However, there is a single cross section area than complies with the regulations. By forcing airflow through the letter box low pressure will be created under the front nose section, which should add a little downforce. The issue is that compared to Lotus and McLaren the nose appears to present more of an obstruction to the airflow, which may make it harder to feed the floor and diffuser.

One benefit of lowering the noses is that the suspension geometry is more favourable. The high chassis cars mean that front wishbones need to be sloped up to the car, which compromises weight transfer. This is a classic example of aerodynamics trumping mechanical grip. Now with the low nose rules many teams will be able to lower the front suspension mountings and run a more typical geometry.

Look at the new McLaren head on and you’ll see the suspension arms are parallel to the ground – this is possible because of the lower chassis. McLaren has also switched back to push-rod front suspension after expermenting with a pull-rod configuration last year. Clearly the pull-rod suspension was identified with some of the team’s handling issues.

A pull rod suspension is (very marginally) the aerodynamically superior solution. The arms slope down to the chassis, presenting a (slightly) better angle to condition airflow, and the centre of gravity of the rocker and torsion bars is lower. The difference is marginal though given the pull rod itself needs to be stiffer (i.e., heavier) and the benefit from conditioning airflow is slight.

Interestingly the lower nose means that it is easier than it was last year to implement a pull rod set-up – if you look at the 2013 McLaren you’ll notice that the pull-rod itself was almost parallel to the ground. Ferrari, unsurprisingly, has chosen to run a pull-rod front suspension for the third year running. Many teams don’t appear to see the benefit. The rendering of the new Williams shows a push-rod set-up as does a obscure photo released by Mercedes of the front wishbone of the W05.

For 2014 the width of the front wing has been reduced by 75mm each side. This is to an attempt to reduce the number of accidents involving the front wing. What seems a minor change is reasonably significant. The shape and structure of the front wing defines the airflow for the rest of the car, which isn’t surprising given this is the first point where air comes in contact with the car. The key factor in front wing design is the wheel-wing interaction as the rubber creates a ton of drag.

In the 2009 regulation change the front wing was widened substantially – prior to this the wing endplates were sloped towards the chassis directing air inside the wheels. In this era the endplates themselves were not particularly sophisticated. From 2009 the flow regime changed and the front wing was designed to direct air outside the wheels. Over time front wings became ever more complex, partly because the outer part of the wing was one of the few areas of the car where there were few regulations restricting design.

The wing is only narrowing a fraction so the design ethos of directing flow outside of the tyres is unlikely to change. However, a lot of time and effort will be required to optimise the front wing to best feed airflow to the rest of the car.

Constructors normally launch their car with a dummy front wing – usually a version from the previous year. However, the McLaren design, which was always a little on the simplistic side, looks a lot more detailed for 2014 with at least six elements apparent from the launch photos. The F14 T, on the other hand, has a simple three-element wing with a cascade protruding from the end plate. This will certainly be updated prior to Melbourne.

With the introduction of the 1.6 litre turbos and Energy Recovery Systems (ERS) the cooling requirements have increased. This means either bigger sidepods inlets or additional cooling solutions. However, teams are keen to minimise the size of the sidepod opening to allow them to maximise the undercut as this helps channel airflow around the car to the diffuser. The faster air gets to the diffuser the lower the pressure above it so airflow is less likely to detach at the rear of the car – this is the primary cause or rear end instability.

McLaren has opted for triangular sidepods to maintain a steep undercut. In addition a duct inside the airbox cools the gearbox, and there are openings around the gearbox to vent hot air from the engine and sidepods.

Ferrari by contrast appears to have much slimmer sidepods than the McLaren – maximising the undercut was one of the central philosophies of the 2014 car design. From the launch photos it is unclear how the F14 T will meet the new cooling objectives although there has been some suggestion that the turbo engine could use air-to-water inter-cooling.

Both the Ferrari and McLaren have a number of turning vanes around the front edge of the sidepod to condition flow to the diffuser. These are similar in structure and purpose the vanes on the 2013 cars.

One of the most significant changes for 2014 is the placement of the exhaust outlet. The tailpipe must exit behind the diffuser on the car centreline. This eliminates any possibility of using the exhaust to blow the diffuser.

The changes to the rear wing are more substantial as the beam wing has been eliminated. The main purpose of the beam wing was to create low pressure above the diffuser, which helps keep air in the diffuser attached. Now the wing has gone the risk of rear-end instability has risen.

To compensate for this McLaren has re-profiled the gearbox (made it much lower – akin to the Williams’ solution) and is using the rear suspension elements to help recreate the beam wing. The rear wishbones are positioned as far back as possible so they are close to the diffuser. In addition the rear wing is attached to the bodywork with a hoop, again to try to divert airflow over the diffuser. Expect to see a lot of innovation and development in this region to claw back some of the lost downforce from the beam wing.

The F14 T appears considerably less developed at the rear than the McLaren does, but expect this to change before start of the season. One obvious difference is that the Ferrari rear wing is connected to car the with a double strut, rather than the single strut on the McLaren. The rear wing itself is fairly standard although the endplates have gained a couple of vertical slots towards the front. As the build up to the Jerez test continues teams we’ll continue to get a glimpse of how other constructors have interpreted the regulations Mercedes and Red Bull are the two big teams that are still keeping their car under wraps but as mentioned Mercedes has tweeted a few discreet shots of its challenger.

Keep an eye out for how the other teams design the nose area as the rules give designers quite a bit of leeway here. And we may also see some innovation at the back of the car with the disappearance of the beam wing.

Given the new regulations this year, the Jerez test is much less about honing the aero set-up and more about understanding and optimising the engine. That’s not to say aero won’t be important – it will be. A few folk are predicting that reliability will determine the destination of the title. Yes, reliability will be an issue – more precisely it will be fuel efficiency and usage – but as we get further into the season aero will likely reassert its dominance.