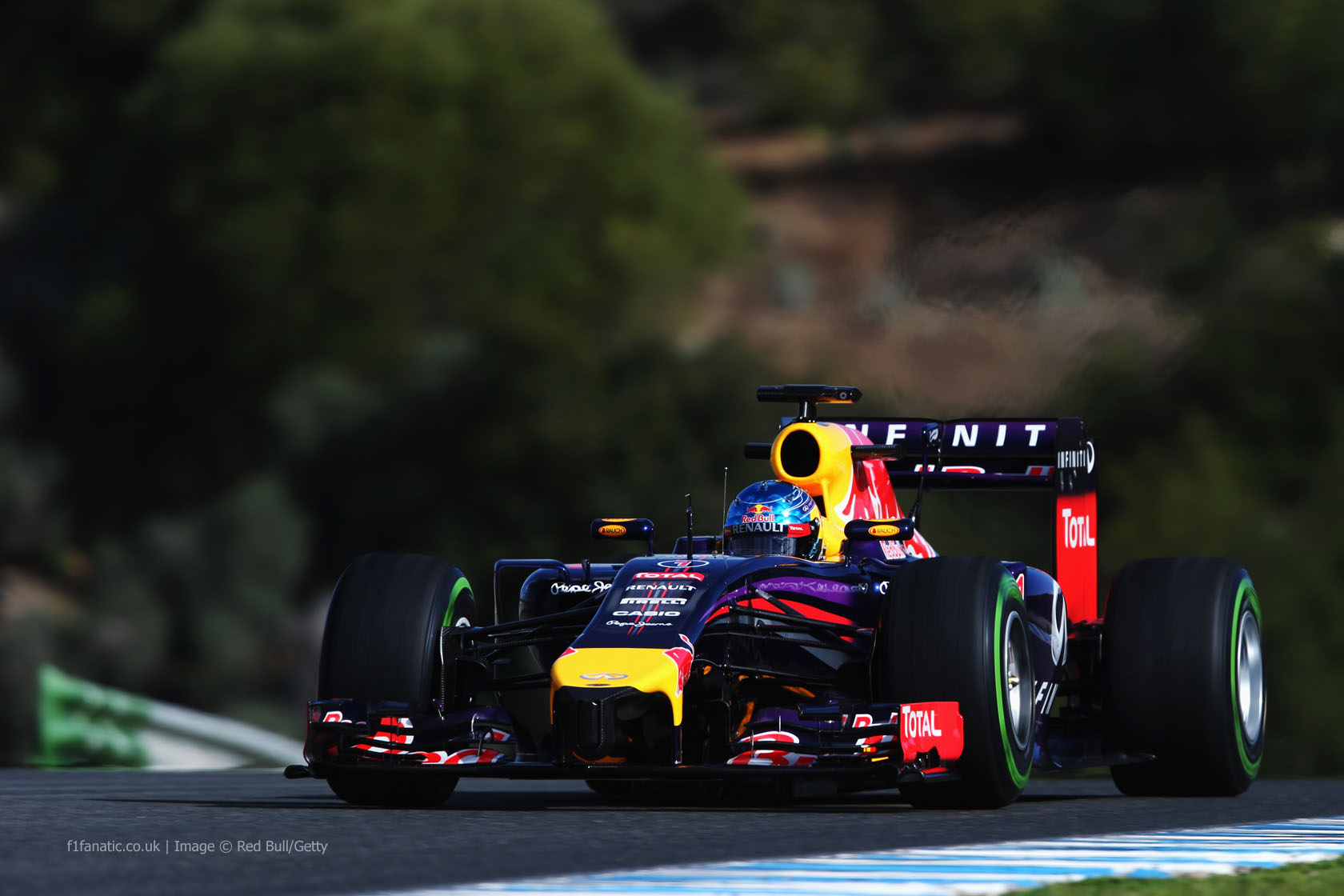 The first test of the new season at Jerez was a bonanza for F1 technology aficionados. Every team bar Lotus turned up with new cars built to drastically changed regulations.

A few of the cars had already broken cover though naturally some of the teams were shy about revealing too many of their secrets in these online launches. A notable example was Force India, who issued only a side-on shot of the VJM07, postponing the full horror of its front appendage until it poked out from beneath a sheet in the Jerez pit lane.

Some of those early cars were examined in a previous article ?óÔéĽÔÇŁ here?óÔéĽÔäós a look at what their rivals turned up with in Spain. One feature of F1 in 2014 is the differing treatments F1 designers have found for the noses. The regulations state that the nose must meet a minimum tip height – 50mm behind the actual time the nose height must be exactly 185mm above the car’s reference plane. The nose must form a cross section, which must be between 135mm and 300mm above the reference plane.

The new Red Bull featured a different take on the anteater proboscis. Adrian Newey has given his car a nose which ends in a keel shape, allows the top to sit 300mm above the reference plane. The keel shape allows the nose to tape to the highest point of the chassis, which allows a greater volume of air to flow under the nose. The regulations state that the nose tip has to be part of the crash structure but it is the RB10 nose that likely caused the FIA clarification on nose design in the middle of the Jerez test.

If you look closely at the tip of the nose you’ll see that it has a U-shaped inlet. This is to reduce the pressure at the tip of the nose where there will be substantial airflow blockage. The RB10 has also retained its chassis-duct – this is a S-shaped slot that bleeds air from under the nose to above the chassis. This increases the odds that the airflow under the nose remains attached, which helps downforce.

The rest of the car is relatively straightforward – the front wing ostensibly pushes airflow round the outside of the tyres, like every other 2014 design we’ve seen. The sidepods are reasonably narrow and heavily undercut in classic Adrian Newey style. Perhaps the most interesting feature is that the rear wing is mounted to the top of the engine cover by a single pillar rather than to the diffuser/gearbox.

Red Bull have always been extra-secretive about their new cars but they seemed to be taking it to extremes in Jerez by only allowing it out of the garage very rarely, covering just 21 laps. Of course the real reason for this was chronic overheating and other problems associated with the installation of Renault’s Energy F1 power unit.

After the Jerez debacle, the Milton Keynes based outfit has plenty of work to do. In the later tests expect significant aerodynamic updates to the rear wing and the bodywork allowed around the exhaust. The new Mercedes is definitely one of the less unattractive of the 2014 cars. Nose-wise it is similar in style to the Ferrari, but if you look head on at the two cars you’ll see that the Mercedes nose is higher than the Ferrari’s by around 65mm – this is a result of some clever design work by the Brackley-based team.

The Mercedes design has as much in common with the Lotus as it does the Ferrari, with one side of the nose strut acting as the primary crash structure and the other covered with a vanity panel to look symmetrical. This then allows Mercedes to raise the rest the rest of the nose structure to the top of the 250mm box within which the nose area must be contained. Maximising the volume of airflow under the car has been a critical part of modern F1 success and seeing the Mercedes design is no doubt causing some head scratching at Maranello.

The new front wing is one of the more detailed launch examples. Compared to the 2013 wing there are a bevy of flicks on the cascades and winglets that aggressively steer airflow outboard of the tyres. The front wing is probably the most frequently upgraded component on a car. This is because it defines the air flow over the rest of the car. Given the changes in regulations (narrowing by 75mm each side) it makes sense for teams to test with a close-to-launch specification front wing to gain rapid understanding of the front airflow characteristics.

Another feature of the W05 is the placement of the cameras, which sprout from the top of the nose by the front forward wishbone. They are reminiscent of the ‘Dumbo’ ears design that the Honda and McLaren used to sport in 2008. The camera housing will act as a flow conditioner channelling more air to the sidepods.

Perhaps the most impressive characteristic of the Mercedes W05 is how tightly packaged it is at the rear. Out of all the launch cars the engine cover is more visibly shrink wrapped over the back of the car to minimise blockage to the rear wing.

A few of the teams use splay the engine cover towards the rear of the car to exit the hot air from the radiators. The W05 opts to have cooling vents towards the side of the radiators, which allows for much tighter packaging at the back of the car. Yet there was little outward indication of cooling problems and the team completed more running than any of their rivals.

The 2014 regulations allow for quite a bit of freedom to place aerodynamic structures around the exhaust exit. We’ve already seen a couple of teams deploy monkey seats above the exhaust pipe in an attempt to extract a smidgen of performance from exhaust blowing. The W05 is relatively free of such bodywork so expect Mercedes to start delivering performance here in the run up to Melbourne.

The majority of the midfield cars have a derivative of the anteater nose. They all look different and none of them are particularly attractive – cue lots of phallic references over the coming 12 months.

Perhaps the only stand-out is the new Caterham, which has a more radical take on the concept. The chassis ends in a wedge and then the nose extends from the underside of the wedge and seemingly connects directly with the front wing. On closer inspection there are two small pillars extending from the nose to the front wing to meet the regulations.

Interestingly Caterham joins Ferrari with front pull rod suspension. The angle of the pull rod improves the flow of air to the sidepods for a marginal aerodynamic gain albeit at the expense of additional weight in the pull rod arm.

The first Jerez test was more about engine mileage and less about aerodynamic innovation but there were a few things that caught the eye. Perhaps the most interesting concept was rear suspension set-up of the new McLaren.

McLaren’s suspension generates the same effect but gets there in a very different way. In short the fat arms block the airflow, which create a blockage (low pressure area) behind the diffuser. It is this that reduces the pressure gradient over the length of the diffuser.

The details of exactly what is going on is complicated. When the MP4-29 was launched it was apparent that the rear wishbones were connected to the gearbox as far back as possible. It looked strange but the reason was to accommodate the fat suspension arms. A consequence of this is that the drive shaft was not enclosed in the suspension arms. Teams like to do this to reduce the blockage at the rear of the car.

For rivals to copy this set-up it it is likely they’ll need to fully redesign the suspension, which is a significant undertaking. The regulations require the arms to be structural and not a fairing – so the fat suspension will be load bearing. Further the suspension arms must have a diameter less than 100mm and the longest axis must be no more than five degrees from the horizontal.

The illustration shows how this works. The cross section of the arm is teat-shaped – with the teat tip facing forward. The length and width of the ‘teat’ will be around about 100mm each, with the length being fractionally longer to adhere to the regulations. The centre line of the teat is at a five degree angle to the horizontal. This ensure that the airflow above the arms is faster which helps create a stagnation point behind the suspension. This is the low pressure zone that will help pump the diffuser – it is doing the same job as a beam wing albeit a lot less efficiently. Other innovations were few and far between given the objective of the Jerez test was to put miles on the engine. What is apparent is that the area around the rear wing and diffuser can be exploited with aerodynamic appendages. In Jerez, the most interesting innovations came from Williams and Toro Rosso.

Williams has exploited the area just above the diffuser to recreate the beam wing. If you look closely at the rear of the car, you see two flaps extend from the endplate a few inches above the diffuser. There are no bodywork restrictions in this zone so this solution is legal. The intent, like for the MP4-29 fat suspension’ is to help the diffuser.

We’ve already seen a few constructors launch their 2014 challengers with a monkey seat above the exhaust exit. Toro Rosso took this one step further with a double monkey-seat. The intent is to harness the fast exhaust gasses to reduce pressure behind the car and again, help the diffuser.

For the Mercedes and Ferrari-powered teams the next two tests before the start of the season should see them turn their attention from reliability to performance. But for Red Bull and their fellow Renault users, priority number one is to get some decent mileage on their new cars.

26 comments on “The first technical innovations of 2014 in detail”