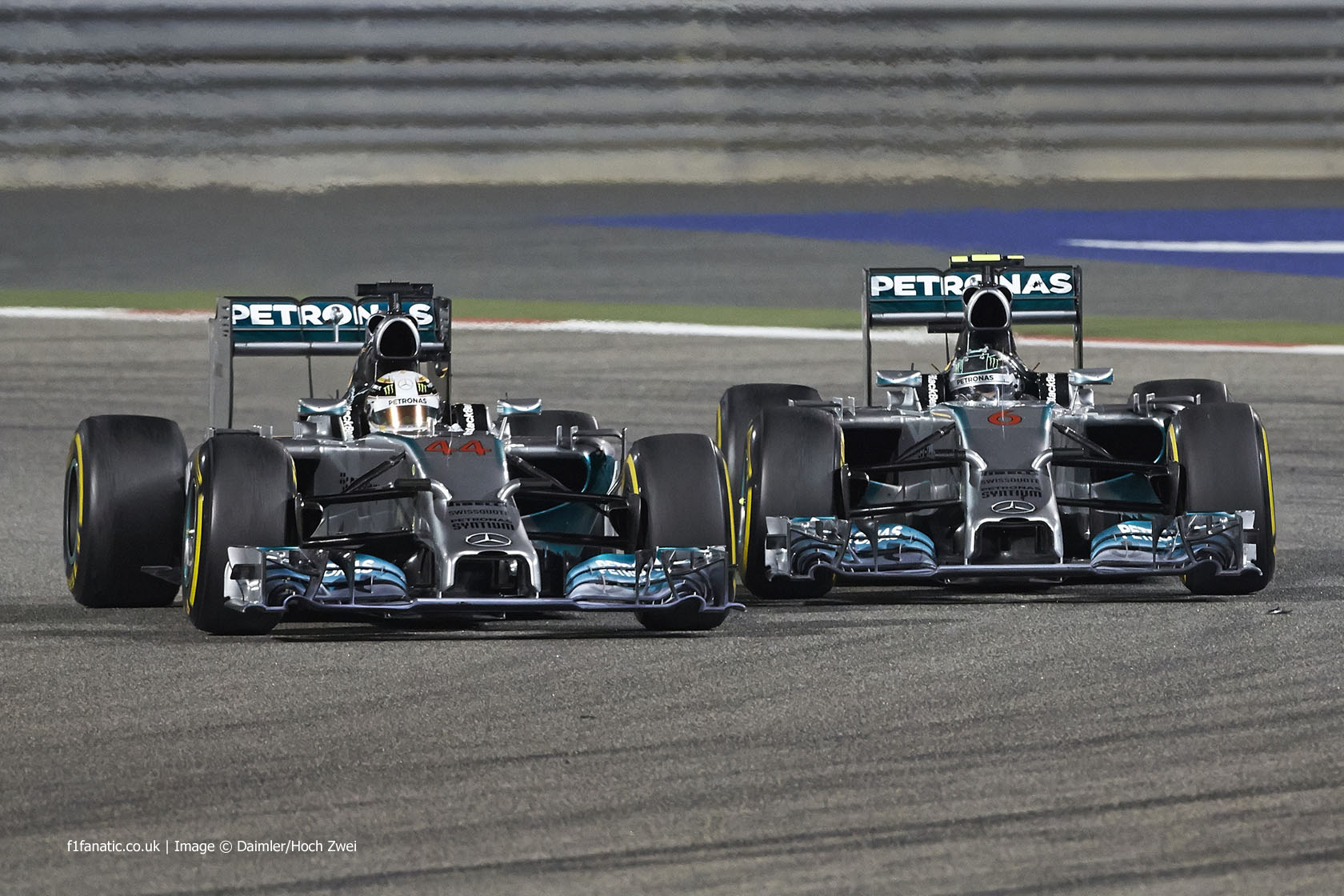 The gripping battle between Lewis Hamilton and Nico Rosberg made the Bahrain Grand Prix a classic race.

Not only did Mercedes allow their two drivers to race each other, they did what they could not to give an advantage to either driver. What unfolded was a great fight and a fair one.

As Rosberg leads Hamilton to the grid, both drivers are given the usual messages about bringing their brakes and tyres up to temperature. Rosberg is told his tyre temperatures are 108.5C at the front and 109.5C at the rear.

Hamilton got a fractionally better start than Rosberg and was able to take the lead at the first corner. He had to defend hard from his team mate at turn four, forcing him wide.

After lap three Rosberg dropped out of DRS range until they neared the end of their first stint. The two cars were in a holding pattern for much of the first stint: tyre and fuel conservation were the name of the game for both.

Rosberg had a reminder of the strategic situation on lap seven. It is common practice among teams for the leading driver to have first call on strategy, as allowing the following driver to pit first could help them jump ahead via the ‘undercut’.

At this point Hamilton was on course for the preferred strategy and Rosberg the “alternative”. This meant Rosberg would be the first driver to use the slower medium tyres – hence he would extend his first stint on the soft tyres.

Unless, of course, he was able to pass Hamilton and take first call on strategy.

A dozen laps into the race both drivers were given the instruction to go to ‘strat[egy] mode seven’. As Hamilton was reassured that both drivers had been told to do the same, we can infer they were being told to use a setting which gave less performance, to save fuel, engine life or both.

Obviously if one driver were to turn their engine down and the other didn’t, one would have an immediate advantage – the problem Red Bull failed to keep on top of during the breakdown in trust between their drivers in Malaysia last year.

On lap 16 Rosberg moved back within DRS range of Hamilton with the aim of taking the lead and priority call on strategy.

Two laps later he went down the inside of his team mate at turn one but Hamilton reclaimed the place. He left his team mate little room at the exit of the corner, which drew a response from Rosberg.

He tried again on the next lap and had the lead for all of four corners – but once again Hamilton took the lead back on the exit of turn four.

At the end of that lap Hamilton made for the pits and took on a second set of soft tyres. Rosberg, wanting to minimise his time on the slower medium tyres, stayed out another two laps, his engineer telling him to push hard.

Hamilton, meanwhile, was reminded he needed to run for as long as possible on his softs to reduce the amount of time spent on the mediums.

With Rosberg on the slower tyres, Hamilton extended his lead to almost ten seconds. Without the Safety Car Rosberg would have had to recover that gap in his final stint and then attack his team mate with whatever tyre life he had left.

But Rosberg was about to get a helping hand from Pastor Maldonado. The Lotus driver flipped Esteban Gutierrez’s Sauber over and the Safety Car came out. That meant Rosberg would not only have the benefit of softer tyres than Hamilton for the final stint, but the gap between the pair of them was eradicated.

Paddy Lowe’s instruction to both drivers to ensure they finished the race might have been taken as an order to stop fighting. Either they ignored him or it wasn’t an attempt to call off the fight. To their credit, it seems to have been the latter.

Rosberg took the fight to Hamilton immediately after the restart.

‘Strat-6′ appears to be Mercedes’ ‘full attack’ engine mode, which can only be used for brief bursts for overtaking. Because the information is shared within the team, Hamilton’s engineer was able to see when Rosberg was using it so Hamilton could “mirror” him.

Even so, Rosberg got his nose ahead more than once, and Hamilton had to use all his racing nous to protect his lead.

Over the final laps Hamilton had little more than the one second DRS gap in hand over Rosberg, but it was enough for him to take a remarkable win.

Hamilton and Rosberg deserved equal praise for their hard, clean fight. And Mercedes are also due credit for trusting their drivers to take each other one without colliding.

They may enjoy a considerable performance advantage at the moment, but it would be worthless if their two drivers crashed into each other.

The gaps between Rosberg and Hamilton on each lap (seconds):