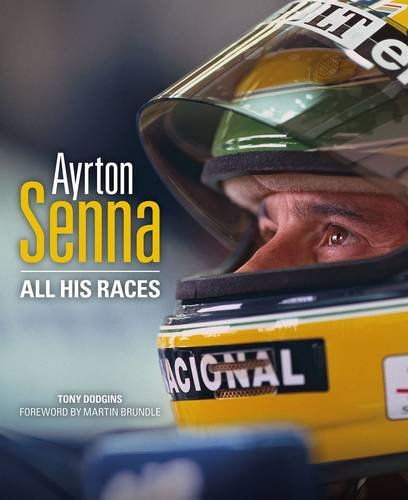 RaceFans Supporters can save 40% on this book and more motorsport titles from Evro Publishing.
Click here for details on how to obtain the discount

Is there anything new to be said about Ayrton Senna?

His life has already been chronicled in more books than any other Formula One driver. And the twentieth anniversary of his death last week elicited a fresh wave of writings about Brazil’s three-times world champion.

More than one publisher has produced new books to mark the occasion, and the first to be reviewed here comes from new publisher Evro. They are staffed by some of the team who worked for Haynes’ now-defunct book publishing arm – something which is immediately apparent from the quality of this production.

The format of “Ayrton Senna: All His Races” will be familiar to anyone who read Stirling Moss’s All My Races, which was published by Haynes five years ago.It’s a synopsis of every event Senna took part in following his graduation from karts to motor racing, the obvious difference being Senna is sadly not around to tell us about his races himself.

So Tony Dodgins, who first saw Senna drive in his F3 days, has assembled his ‘raceography’. The result is a magnificently detailed account of every major race Senna drove in. Senna’s rapid ascent to Formula One takes up the first third of the book and is fleshed out with interviews from his rivals from the time. They tell tales not that dissimilar to those who went up against Senna later in his career.

His exploits in F1 are more well-known but here they are given thorough reviews which go well beyond a simple recounting of the scores at each round. In F1 there is usually a political context to what happens on the track and that wider context is not overlooked here.

The race reports are interspersed with featured on other talking points from each season. These can get a little repetitive, with the reader being directed to different pages within the book rather too often.

Dodgins has drawn on every source available to assemble this rich history of Senna’s races, including original interviews and contemporary accounts. If you’re a prolific reader of F1 books you will come across some familiar material from titles such as Malcolm Folley’s Senna versus Prost and Tommy Byrne’s memoir Crashed and Byrned.

This works to great effect when it comes to the landmark moments in Senna’s career, particularly the Suzuka controversies. More than twenty years on, there’s no need to sit on the fence abuot these incidents and I enjoyed reading Dodgins’ trenchant views on FISA’s (mis-) handling of these episodes.

The book is illustrated throughout with a magnificent selection of photography from the Sutton archive, making it as absorbing to look at as it is to read.

Having read too many indifferent books on Senna and a fair bit of dross as well, it was pleasure to discover All His Races was at least as good as I hoped it would be. It’s one of few Senna books his legions of followers should make room for on their shelves.

Buy Ayrton Senna: All His Races

Ayrton Senna: All His Races

5 comments on “Ayrton Senna: All His Races reviewed”