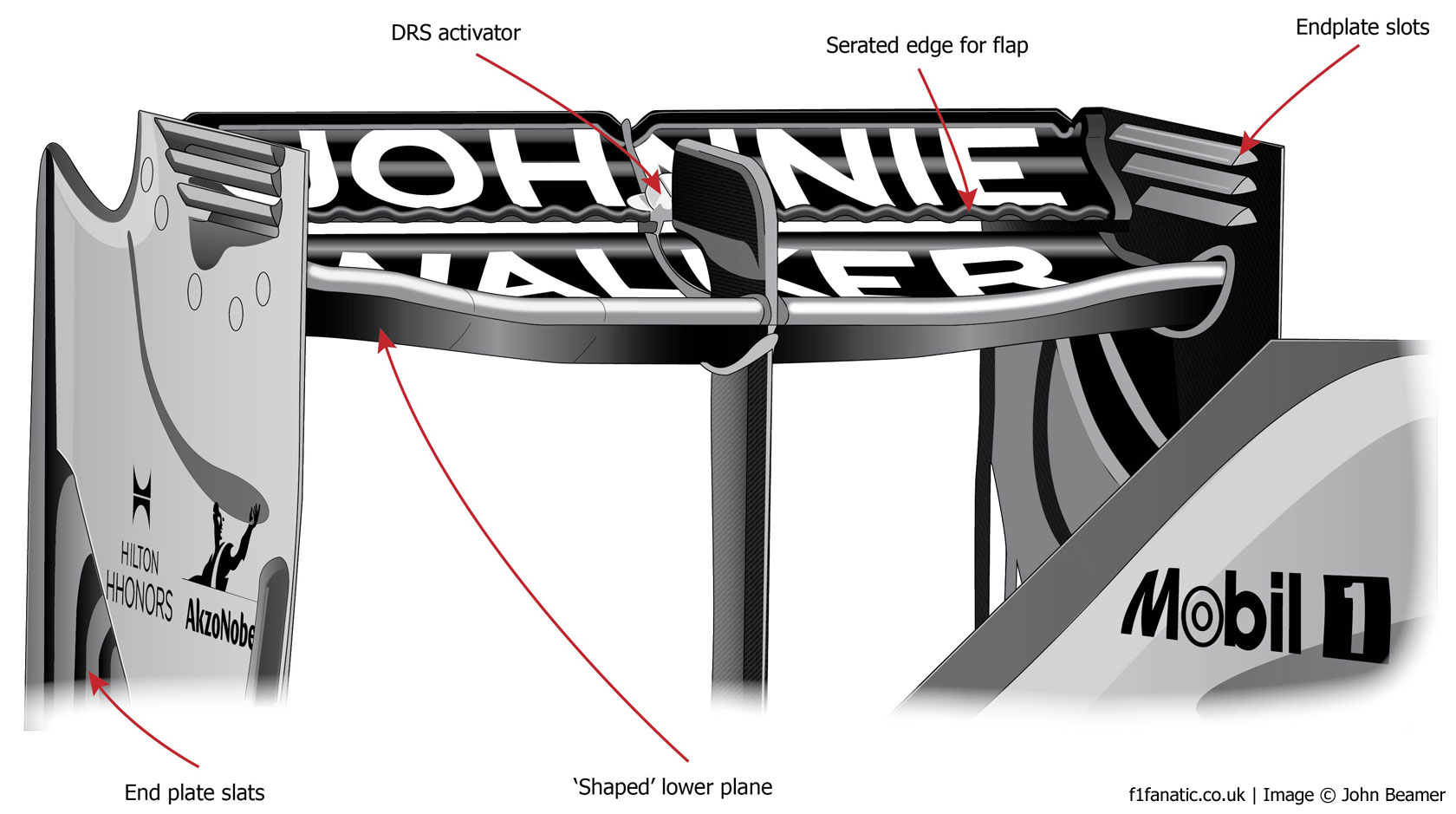 Monza and Spa demand the lowest downforce settings seen all season long. Particularly at Monza, where there are only a few fairly short corners to break up the straights, the cars are trimmed out to reduce drag to a minimum in order to maximise top speed.

The most obvious visual change is the rear wing, which tends to be far skinnier than at most grands prix. Ordinarily it is positioned to generate downforce, but at high-speed Spa and Monza this is sacrificed for pure speed.

The top teams create bespoke rear wings for Spa and Monza. But even between these there significant differences. The Mercedes-powered cars, revelling in the extra grunt of the three-pointed star, could afford to use a thicker rear wing than the likes of Red Bull.

To make up the shortcomings of their Renault engines Red Bull opted for a drastic low drag set-up. It was able to get away with this because the other surfaces of Adrian Newey’s RB10 generate so much downforce to begin with.

The illustration below shows the rear wing McLaren used on their MP4-29 at Spa: In comparison, note the depth of the wing McLaren used in Hungary in the photograph. The angle of the Monza wing flap is shallower, reducing the cross-section area of the rear wing, which results in lower drag.

The most interesting feature of the MP4-29 rear wing is the ‘wave shaped’ leading edge on the upper flap. When DRS is de-activated it often takes a short while for downforce to build back up. The ‘waves’ create mini-vortices on the underside of the rear wing that help air attach more quickly after DRS is deployed.

As seen in the drawing the main plane has a gentle U-shape. This creates more consistent downforce, for better rear stability on cornering. McLaren felt that was important at Spa where there are a number of medium-to-high speed corners. McLaren altered the main plane for Monza making it straight thereby reducing its cross-section area and lowering drag.

In sharp contrast, this weekend’s race is at Singapore, where we can expect teams to use wings closer in specification to those seen in Hungary. Singapore is a typical ‘point and squirt’ street circuit with a ton of corners, where teams will go to the opposite extreme and sacrifice straight-line speed for downforce.

Those Monza ‘tea trays’ will be left at the factory in favour of the Singapore ‘barn doors’.

8 comments on “From one extreme to another: Monza’s low drag wings”