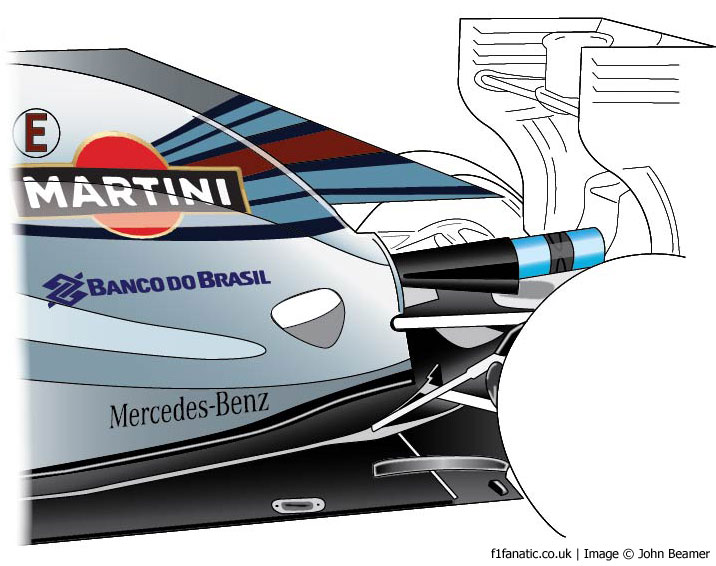 It’s easy to spot changes to a car’s front or rear wing, but the humble engine cover tends to undergo more subtle changes.

But this area of the car plays a fundamental role in its performance. The way it is designed highlights a key difference between teams who design their own engines – like Mercedes and Ferrari – and their customer rivals.

The new V6 turbo power units introduced this year have much greater cooling requirements than the previous V8s. The new Energy Recovery Systems create some extra heat but it is the addition of the turbo that really ramps ups the cooling requirement.

The turbocharger’s job is to shove as much air into the engine as possible. This mixes with fuel to create more power – the more fuel/air mix in the engine, the more power the unit generates. The turbo has two turbines for increasing air flowing to the engine – one drawing air in, and the second spun by exhaust gasses.

An intercooler (a heat exchange) helps reduce the temperature of this air as cooler fuel/air mix makes for a more efficient engine. This recycling of hot air through the intercooler and engine is what gives right to the dramatically higher thermal footprint of the 2014 power unit.

Given the radically different engine formula most designers chose a conservative cooling route thinking it better to optimise a working package than having to fundamentally redesign an overheating car. This is an equation that Red Bull got wrong to begin with – its pre-season test plans was wrecked by persistent overheating problems.

The basic philosophy of cooling design is to build a ‘base’ solution that delivers efficient aero performance for the majority of tracks. In addition to this design in slots for holes and louvres to allow extra heat to escape. Then at tracks with more extreme cooling needs it is simple to adapt use louvres to vent excess heat. As designers get to grips with the car’s thermal footprint the ‘base’ cooling solution will be revised.

This is the trend we have seen in 2014 and since the halfway mark of the season more teams have introduced ‘shrink-wrapped’ engine covers. The drawing below shows the Williams FW36 from Sochi. The engine cover has shrunk by 50mm, which reduces blockage to the rear wing, improving its performance. The FW36 also features a ‘rear vented’ cooling solution with the bulk of hot air exiting at the back of the engine cover under the rear wing main plane.

This is the most common configuration and is adopted by most teams on the grid. The alternative is to vent air from the sidepods but having excess heat go under the rear wing is less aerodynamically disruptive.

It is not only a better understanding of cooling requirements that has allowed teams to shrink their engine covers. The removal of FRIC suspension has also had an effect. By eliminating the interlinked suspension teams have saved more space around the lower sidepods allowing a tighter design and a smaller coke-bottle areas.

One of the reasons why Mercedes has such an advantage is that they split the turbo between exhaust turbine and air intake which meant the exhaust gasses didn’t heat the air so much meaning the intercooler, and thereby thermal footprint, could be smaller. Not only could Mercedes better balance weight distribution towards the centre of the car, but they could also design tighter engine packaging. This slimmer package allows faster air to be fed to the rear wing/diffuser region, which translates to higher downforce.

This is why it is so beneficial to build the engine and chassis in an integrated way. Mercedes’ customer teams all have the benefit of the best power unit but have not been able to extract the same aerodynamic benefits.

It is therefore hard to see a challenge to Mercedes in 2015 coming from anywhere other than Ferrari, who have always built their own engines and chassis, Red Bull, tied more closely to Renault following Lotus’s defection to Mercedes, and McLaren with their new Honda engine.