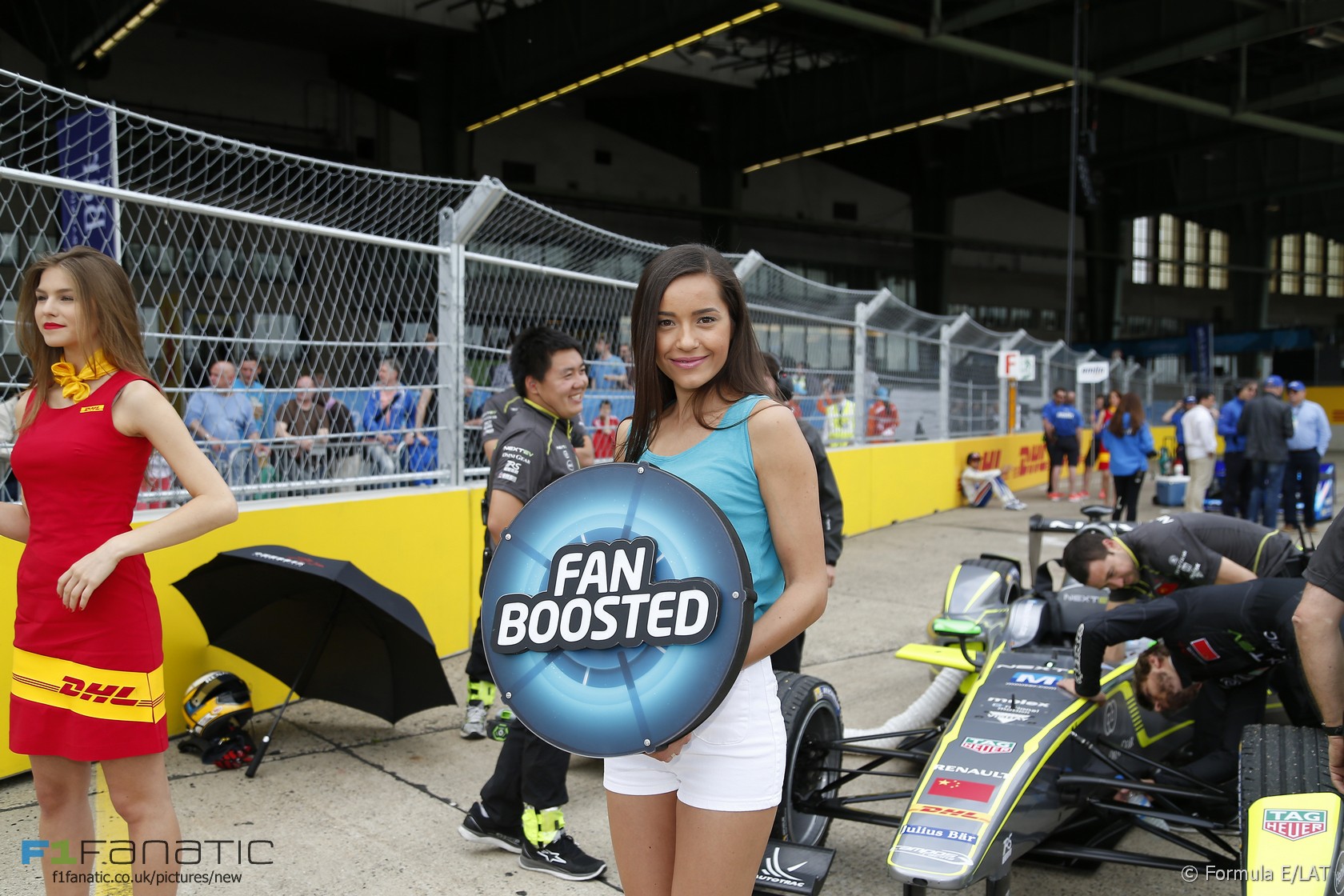 Formula One gets it in the neck sometimes for its silly rules changes. And it’s often deserved – such as when the despised double points system was introduced last year.

But it’s far from being the only form of motor racing which has given up some of its sporting purity and opted for gimmicks in the name of ‘improving the show’.

So we should celebrate the fact that Formula One hasn’t borrowed these ten artificial means of spicing up the racing from other championships. At least, not yet…

Chase for the Cup The great strength of the points systems F1 has used since 1991 (with the exception of last year) is that all races are given equal value.

Each championship can therefore tell its own story. Sometimes two or more drivers will be neck-and-neck all season long (2007), or one driver mount a comeback bid which ends with them seizing the title (2012) or falling short (2006). And, yes, sometimes one driver will crush the opposition and wrap up the title well before the final race (2013). Such is the way of sport.

But a final-round showdown is what everyone wants to see, especially F1’s promoters, and so it is perhaps only a matter of time before someone brings up the idea of copying NASCAR’s playoff-style Chase for the Cup.

If it happens, forget about watching each season unfold naturally as the balance of power tips between different drivers. The complicated Chase for the Cup format (explained in detail here) guarantees there will always be four drivers capable of winning the championship at the final race, even if one has vastly out-performed the other three over the preceding 35 races.

But a contrived showdown could never match the thrill of F1’s tense and unpredictable last-race thrillers, such as those of 2012 and 2008.

Smart rule-writers ask “how do we encourage drivers to do this?” Dumb rule-writers ask “what if we did this?” Points for fastest lap, like points for pole position, is the latter: a result of tinkering with the rules with no worthwhile aim in mind.

Awarding points for fastest lap discourages drivers from racing for position. Time and again in GP2 we see drivers give up on fighting for position so they can drop back and try to set a fastest lap time, turning what was supposed to be a race into another qualifying session.

This kind of slapdash rule-making invariably has unforeseen consequences which requires the creation of further complicated rules. For example, to stop drivers near the back of the field sacrificing their position entirely by dropping back into clear air or pitting for fresh tyres, additional rules were written to limit which drivers are eligible for fastest lap points.

All of which serves to make the championship more difficult to follow and can seriously detract from the on-track action. At Monza in 2006, the GP2 feature race ended with title contenders Lewis Hamilton and Nelson Piquet Jnr separated by six points. An exciting final-race showdown the following day was in prospect – until it was discovered Giorgio Pantano had set the fastest lap of the race under yellow flags, his points were handed to Hamilton, and the championship was over.

Surely no one wants to see an F1 title fight decided that way. Success ballast – a polite term for handicapping the top drivers by making them carry extra weight – has unfortunately become an established feature of most forms of touring car racing.

Even the BTCC, which boasts a vast, diverse and healthy grid (and already uses other means of performance balancing), can’t bear to wean itself off artificially-induced close racing. The result is a hollow spectacle where each front runner takes it in turns to collect wins.

When the BTCC first introduced success ballast each car was clearly marked to show how much weight each driver was carrying. That didn’t last – it now prefers to disguise how success is penalised in the name of ‘improving the show’. It and other series should take a lesson from Australia’s V8 Supercars series, which doesn’t use success ballast and produces spectacular racing.

In the GPDA’s recent survey, almost three-quarters of F1 fans rejected the idea of introducing success ballast – an overwhelming vote against this gimmick. Sebastien Bourdais stormed to victory at Milwaukee on Sunday’s 12th round of the IndyCar championship. But after the race his car was found to be under the minimum weight limit.

In Formula One, the consequences would be disqualification. If you gain a sporting advantage by breaking the rules – and running underweight undoubtedly is – the punishment is exclusion. In qualifying for the British Grand Prix two years ago Paul di Resta was stripped of his times having been just half a kilo underweight.

F1’s rules are tough but fair. IndyCar, for all its other qualities, ducks the hard calls and levies minor fines instead – in this car $5,000. Bourdais is the third driver in four years to win a race despite his car failing a technical inspection.

No one likes to see race winners being stripped of their victories long after the race has finished. But given a choice between keeping the crowd happy and keeping the competition fair, F1 gets it right and IndyCar gets it wrong.

The possibility of splitting the field in half to run qualifying was raised at Monaco five years ago when the F1 field rose to 24 cars. A persuasive case was never made for why this should suddenly be necessary on a track which had previously accommodated as many as 30 F1 cars.

Nevertheless this is a common practice in other series. The potential for unfairness here is obvious, as it makes it possible for a driver to beat all the rivals he shares a track with in qualifying, yet not take pole position.

Besides depriving spectators of the excitement of seeing all the top drivers going-head-to-head, the blatant unfairness of this system is the most obvious reason why F1 should continue to steer clear of it. It sometimes feels like rival championships to Formula One get an easier ride from critics, and the adulation heaped on Formula E recently was a good example. It’s a championship with much to commend it, but allowing drivers to do something as wasteful as discard an entire car mid-race harpoons the green credentials of a series intended to promote environmentally-friendly technology.

Meanwhile Formula One received only minor credit for the leap forward in efficiency it made with its 2014 power units while sacrificing little in the way of performance. Of course it only has itself to blame – Bernie Ecclestone was too busy slating the sound of the new engines to draw attention to their incredible blend of performance and efficiency.

Even so, F1 now has power units which can last up to five race weekends, and the detractors would have the knives out quickly if drivers needed use two entire cars per grand prix.

In Rallycross, drivers are typically required to use an alternative route in the track layout once per race, which may either shorten or lengthen their lap time. That may make sense in a series which is geared towards short, explosive races lasting mere minutes, but it would be wholly unsuitable for Formula One.

Remarkably, this very idea was proposed by one senior team figure in the mid-nineties as an alternative solution to the difficulties of overtaking. All the mundaneness of a pass in the pits without the minor interest of a pit stop? Thankfully that brainwave failed to win support. Having pole position for a race is a major advantage, so it should surprise no one that when championships start offering it as a reward for finishing low down the running order, some drivers will give up trying to lap quickly in qualifying.

In the World Touring Car Championship, the grid for race two is set by reversing the order of the top ten qualifiers for race one. So at the last round in Portugal, Citroen had two of their drivers set fast times to lock out the race one front row, and two others set deliberately slow times to qualify on row five – which became the front of the grid for race two.

Citroen’s tactics couldn’t be faulted. The same could not be said for a dubious qualifying system that rewards poor performance and discourages the flat-out fight for pole position we all want to see.

Other championships take the idea to even more dubious extremes. In the BTCC numbers are drawn from a bowl to decide how many places are reversed for the final race. The drivers no longer get to do so themselves after, predictably, during one draw a driver spied his own number and grabbed it to ensure he took pole position.

Worse, at one IndyCar race in 2011 the entire grid was drawn by lottery in an excruciatingly embarrassing made-for-television feature. Thankfully everyone had the sense not to repeat it: Formula One’s DRS contagion has already infected other championships, but happily so far they have all proved resistant to Fanboost: the toxic strain of gimmickry for which Formula E is Patient Zero.

Never mind Formula One, even WWE would be diminished by something as tawdry as handing a special advantage to its most popular competitors. To the list of reasons why Fanboost is appalling, we should add the condescending hypocrisy of the championship’s organisers, who urge the public to join in Fanboost polls while not giving them an option to get rid of it.

As long as other championships using reverse grids, success ballast and Fanboost to engineer more excitement, can F1 afford not to?

Or should the ‘pinnacle’ of motor racing be a cut above this sort of thing – and not care about those who complain if it makes for ‘boring’ races?

Have your say in the comments.

91 comments on “Top ten: Ridiculous rules F1 doesn’t have (yet)”