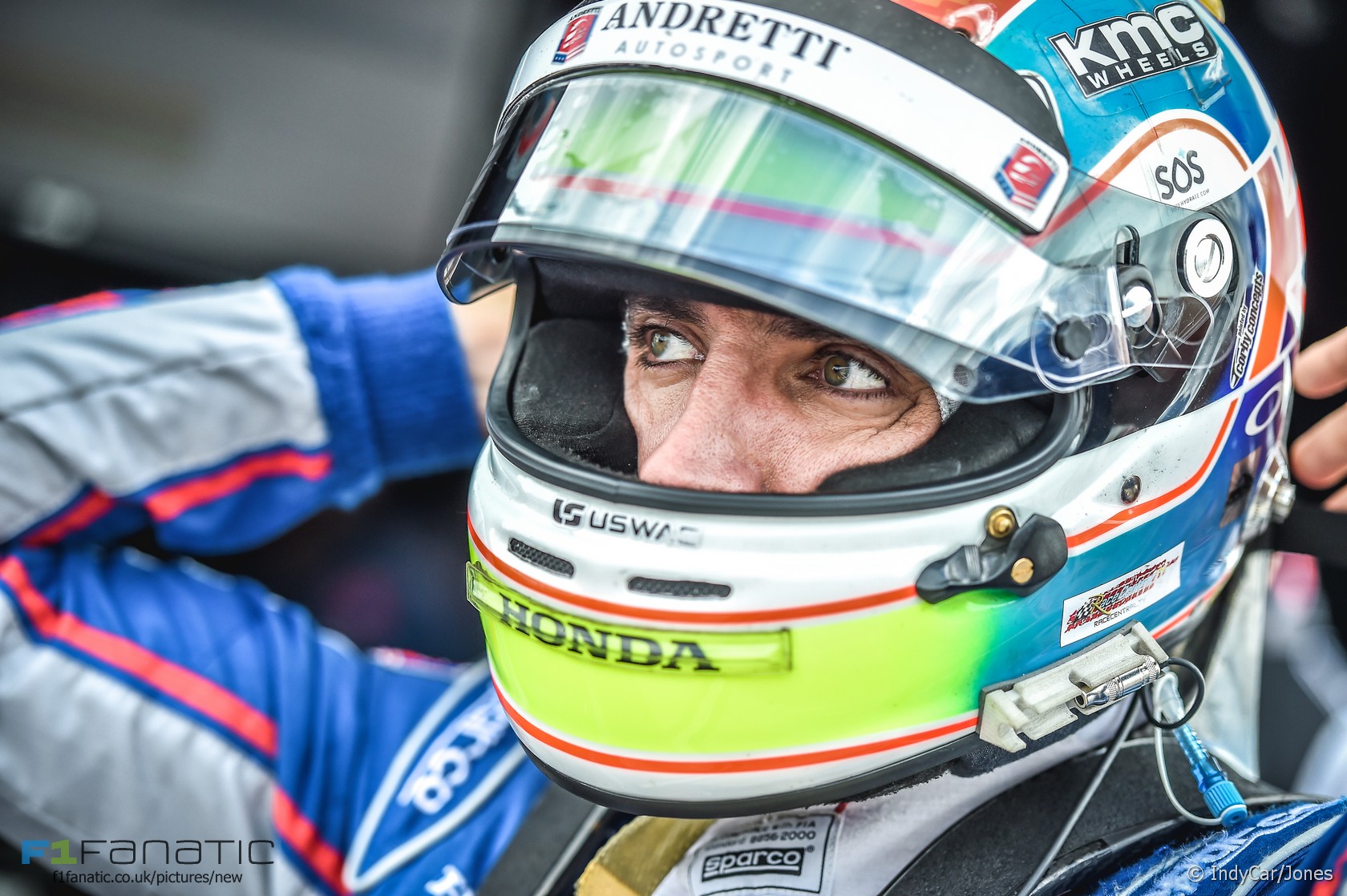 Justin Wilson remains in a coma following his crash in yesterday’s Pocono 500. It was the penultimate round of the IndyCar championship, which will conclude on Sunday at Sonoma. Ryan Hunter-Reay won an incident-filled race at Pocono which had already seen several caution periods for accidents before Wilson’s crash. One of them came when championship contender Graham Rahal retired in a collision with Tristan Vautier.

Points leader Juan Pablo Montoya came home third behind Josef Newgarden. With a maximum of 104 points available at Sunday’s double points finale, six drivers go into the final race with a mathematical shot at the championship:

Update: IndyCar has confirmed Justin Wilson has died from the injuries he suffered in the crash

Video of this race is not available yet. The video above is from qualifying.

Next round: Sonoma Raceway

Sebastien Ogier took his sixth win from nine rounds this season and can win the championship at the next race in Australia. Since joining the WRC, Volkwagen’s home round in Germany hasn’t been kind to them, but that changed this weekend with a podium lockout, as Latvala and Mikkelsen came home second and third.

Next round: Australia (11th-13th September)

A first in the World Rallycross Championship: Never before had a team scored a one-two in the series, which is in its second year, but Peugeot changed that at Hell in Norway. Timmy Hansen led home team mate Davy Jeanney

Next round: France (5th-6th September)

Hiroaki Ishiura extended his points lead with his second victory of the season. In a typical Motegi procession Ishiura led home Kazui Nakajima, who jumped up to second from fifth on the grid at the start.

Kamui Kobayashi endured a frustrating race, holding third place before suffering a slow pit stop and dropping back, then tangling with a rival on the final lap.

Next round: Autopolis (13th September)

Mark Winterbottom left Eastern Creek with a reduced championship lead – down from 256 points to 174 – after a win-less weekend. Chaz Mostert doubled up – winning the rain-hit final race (above) – and rose to second in the standings, while Jamie Whincup triumphed in race two.

Next round: Sandown Raceway (13th September)

As the BTCC made its annual trip to Scotland the victory spoils were shared by Rob Collard, home favourite Gordon Shedden and his team mate Matt Neal. Yet despite taking just 19 points from the three races, Jason Plato retains the championship lead.

All three races were packed with action, none more so than race three, where teenager Aiden Moffat claimed his first podium after Andy Priaulx was penalised for an over-aggressive move.

Next round: Rockingham (6th September)

Joey Logano took victory at the tight half-mile Bristol oval but was chased home by points leader Kevin Harvick who recorded his tenth top-two finish of the year.

Next round: Darlington Raceway (6th September)

Stoffel Vandoorne extended yet further his Championship lead in GP2 with a home feature race win, while Alexander Rossi took his first win of the season in the Sprint Race. The big news however was an accident for Daniiel de Jong following contact with Red Bull Junior Pierre Gasly heading into Blanchimont. de Jong had to undergo surgery for a broken sixth vertebrae but is reportedly now stable.

Esteban Ocon won race one on Saturday, but was stripped of the victory after being judged to have gained an unfair advantage under the Virtual Safety Car, with the win being handed to Emil Bernstorff. Luca Ghiotto won race two to extend his advantage at the top, with Ocon second for the fifth race in a row. A number of incidents overshadowed the weekend however, including a big accident at Radillion for Jann Mardenbrough and a tyre failure exiting Blanchimont for Aleksander Bosak.

What did you watch at the weekend, and what – if anything – stood out to entertain you? Let us know in the comments below.

As well as next weekend’s IndyCar finale we will also see the World Endurance Championship is also in action for the first time since Le Mans as the series moves on to the Nurburgring. The European Formula Three and DTM series also return.

Thanks to @bradley13 for contributing to this article.