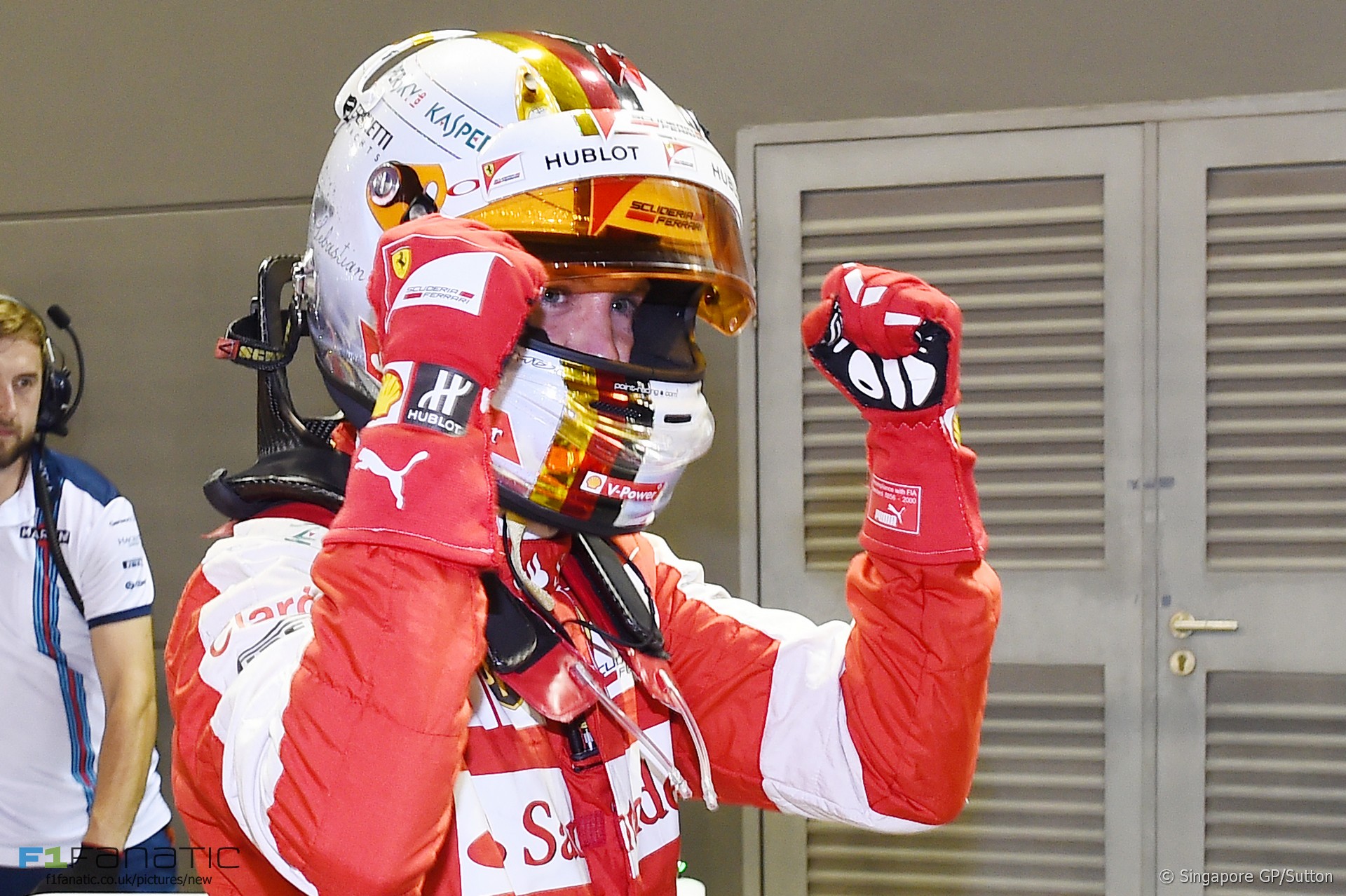 Amid the elation of having secured Ferrari’s first pole position in a dry qualifying session in five years, Sebastian Vettel was quick to trot out the standard Saturday mantra of a Formula One driver: “It’s only Saturday and the main job is coming tomorrow”.

Vettel has tended to go well at Singapore, and today showed that’s only partly due to the nature of the cars he’s had to drive over the past few years. He’s finished the last five races here in the top two positions, and could claim his fourth victory tomorrow.

However the long-time Red Bull driver will be alert to the threat of the car starting alongside him. Daniel Ricciardo has not been one of the fastest-starting drivers this year, nor is the RB11 likely to trouble the Ferrari on the straights. But it’s performance over a race stint is superb, as Ricciardo demonstrated on Friday.

Previously this year that pace has allowed Red Bull to make up places in the race by pitting early to gain the advantage of the ‘undercut’, secure in the knowledge that they can run longer on their next set of tyres than their rivals without getting into trouble.

That is all the more valuable at this race, where the probability of a Safety Car period is high. There has never been a Singapore Grand Prix without one, though F1’s ever-dwindling grid means the risk is steadily getting lower.

Last year several drivers tried to eke out their tyres after a Safety Car period but ended up being mugged by those who pitted for fresh rubber – including, ironically, the very driver who had caused the Safety Car period in the first place.

Vettel, therefore, may rue the fact he doesn’t have his team mate starting alongside him as a potential buffer to the first Red Bull: Kimi Raikkonen was a huge 0.782 seconds behind. He lines up third, on the cleaner side of the grid, however that advantage is not as great as it was in the first few years of the race – a glance back at the pictures from 2008 and 2009 shows how much dustier it was off-line back then.

If you tried to design a corner which encourages drivers to cut it to gain an advantage, you’d probably end up with something similar to the first three turns at Singapore. But after years of drivers cutting the second turn to gain positions – notably Fernando Alonso at the start of last year’s race – this time drivers have been warned they must not rejoin until turn three if they do go off, ensuring they won’t benefit. About time too.

But where do Mercedes fit in to the fight for victory? Remarkably, this looks like being the first time they could lose a race on sheer pace since the end of 2013. Yes, they’ve lost races since then but not without some kind of mistake on their part: be it a driving error, poor strategy or reliability problem.

But in Singapore they just aren’t quick enough. In Monza Ferrari were far more competitive over a single lap in qualifying than they were over the race distance, and that may explain part of the difference here, but this is more a case of Mercedes losing performance than Ferrari finding it. The Mercedes were particularly weak at the end of their flying lap on super-soft tyres, but Lewis Hamilton feels they are also vulnerable on the harder compound.

Not that Vettel will be losing any sleep over that. “They’ve been way too comfortable and too strong for a long time,” he remarked after qualifying. “But I wouldn’t rule them out for tomorrow…”

Will it be Vettel versus Ricciardo for victory on Sunday? Can Mercedes win this from the third row?

Share your views on the Singapore Grand Prix in the comments.

59 comments on “Vettel can expect race-long pressure from Ricciardo”