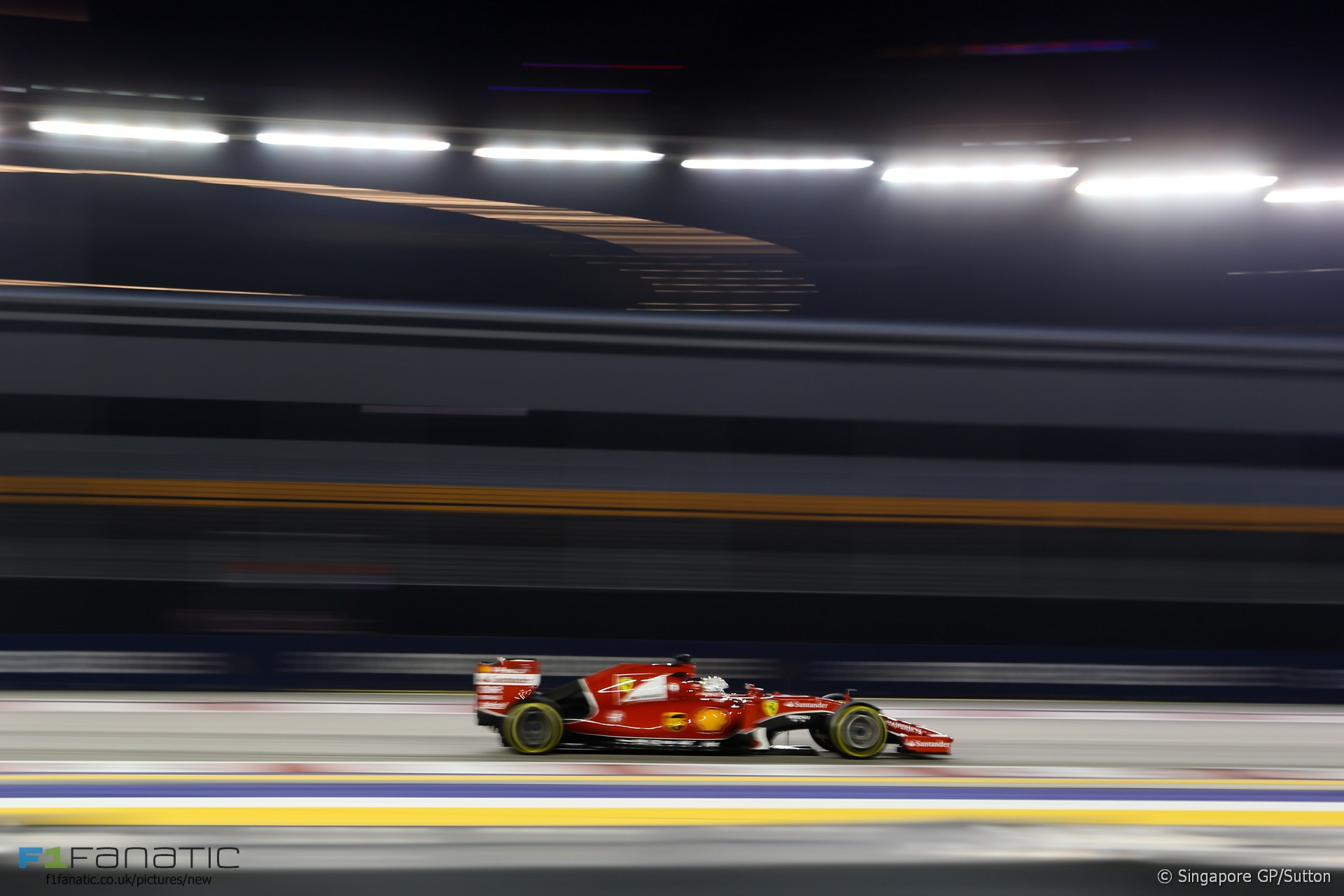 The biggest surprise of qualifying in Singapore wasn’t just that Mercedes were beaten, but that they were conclusively beaten.

Sebastian Vettel led the way as Ferrari and Red Bull ejected the silver cars from the front two rows. He looked on course for pole position from his very first lap in Q1, and ended up almost half a second clear of the entire field.

Ferrari therefore took pole position for the first time in over three years.

A scorching effort from Vettel on soft tyres, producing a 1’46.0174, left him confident he could make it through to the second round without another run. His team mate failed to get within nine-tenths of a second and was among those who had to go again.

Raikkonen stuck with the soft tyres for his second run, as did Daniel Ricciardo,and both secured passage into Q2. But both Mercedes drivers had to switch to the softer rubber, confirming the impression from practice that the silver cars were not on the leading pace.

The Lotus cars looked a handful: Romain Grosjean went wide at turn seven and Pastor Maldonado got crossed up in the new section of track crossing the Andersen bridge. The latter failed to make the cut, almost half a second off his team mate’s pace.

He was accompanied by the two Manor drivers, who were further away from the pace than usual: Will Stevens was over three-and-a-half seconds away from the next car, with new team mate Alexander Rossi a further half-second behind.

Jenson Button used super-soft tyres for both his runs and the last proved quick enough to earn him a place in Q2, leaving both the Sauber drivers behind.

Raikkonen slashed his deficit to Vettel in Q3, getting within four-tenths of the other Ferrari on his first run. Still it was Vettel who led the way, the pair separated by Daniil Kvyat.

Max Verstappen got his Toro Rosso into the top ten on his first visit to Singapore but Carlos Sainz Jnr asked too much of his car’s rear traction at turn 19, clipping the barrier and breaking his suspension and front wing.

With debris on the racing line and yellow flags covering the danger area, the remaining drivers were unable to improve. It was bad news for Force India and McLaren, particularly the latter who harboured hopes of a more competitive showing in Singapore.

Ricciardo came out fighting in the pole position shoot-out and on the strength of his first run it looked as though he might give his former team mate some competition.

But his final run didn’t go according to plan: first Williams released Valtteri Bottas in front of him as he left the pits, and despite backing off to find space for his flying lap he lost time at the beginning of his run and never managed to take it back.

Raikkonen fell short of beating him by two tenths of a second and nearly lost third to the other Red Bull of Kvyat.

The Mercedes drivers began the top ten shoot-out on used super-soft tyres, but Hamilton chose to abort his run. His single effort on new tyres began well, but he lost over half a second to Kvyat in the final sector alone, suggesting Mercedes were indeed struggling for tyre life in the traction-heavy final sector, possibly due to the latest tyre pressure restrictions.

Rosberg took up his customary position just behind Hamilton, and Max Verstappen claimed eighth place despite running very wide on his final lap.