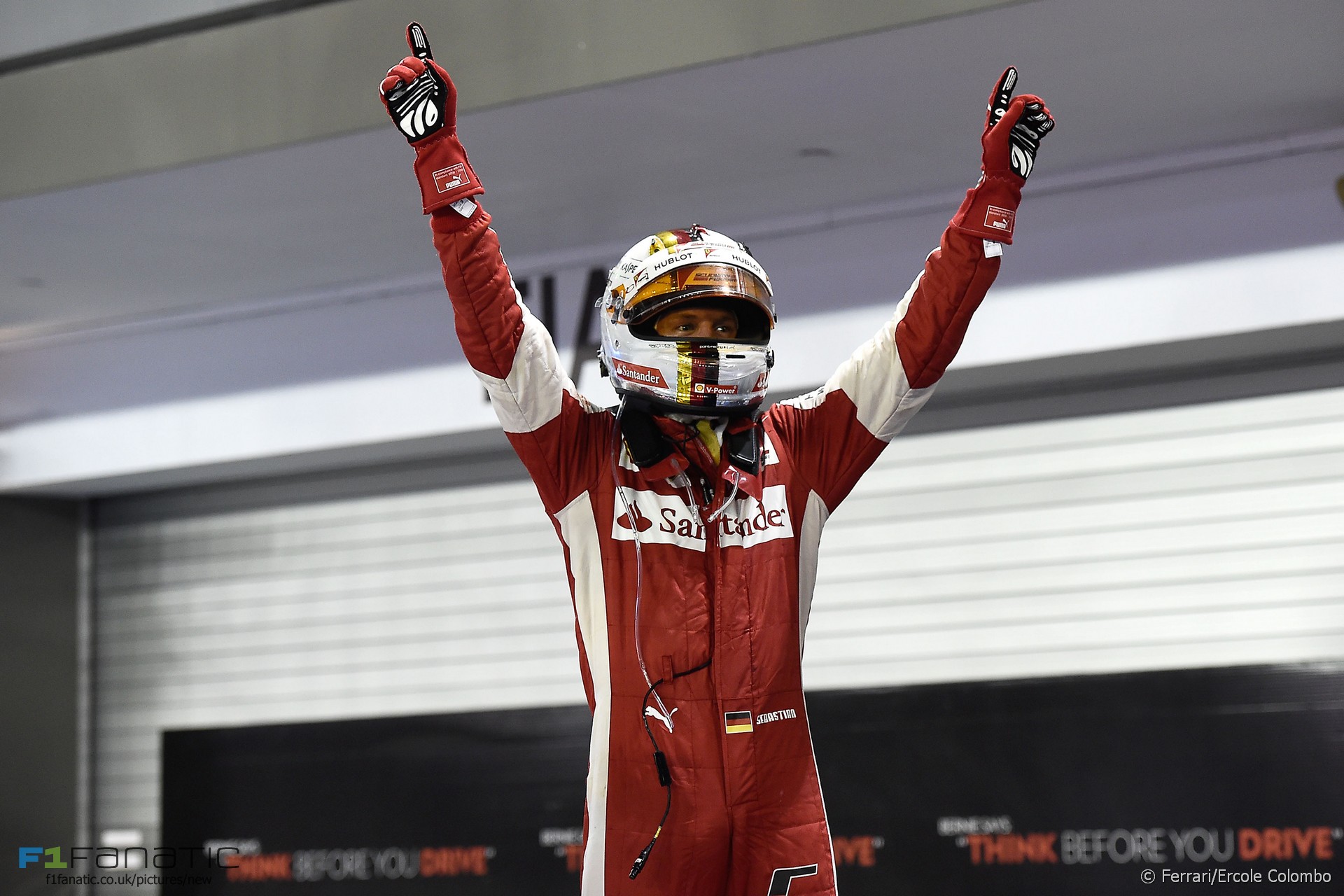 When Sebastian Vettel last won the Singapore Grand Prix, some in the crowd booed him. ‘They’re tired of him winning all the time,’ was one of the more regularly-cited explanations for their crass jeers.

How times have changed. Two years later, Red Bull’s domination of Formula One has been eclipsed by Mercedes, who aside from the occasional slip-up have painted the sport silver since the start of last year.

Not in Singapore, however. Suddenly Mercedes are fallible, vulnerable even. Not only did one of their cars fail to see the chequered flag for the second race running, but all weekend long they simply lacked the pace of Ferrari and Red Bull. It was a shock to the system.

While Mercedes toiled in the dark on Saturday, Vettel tore up the streets of Singapore on his way to his first pole position since the end of 2013. He ended up over half a second quicker than the field, and the opening lap of the race showed he intended to serve up more of the same.

Having led the field to turn one, Vettel made it back to the start/finish line three seconds before the chasing pack. But the threat from Daniel Ricciardo behind him was real: Red Bull knew it was only a matter of time before the lap times swung in their favour.

Sure enough, after half-a-dozen laps Ricciardo was already beginning to see the Ferrari ahead grow larger. Red Bull’s long-run pace on Friday had worried their rivals, and it seemed we were set for a race-long scrap between the pair.

But Red Bull’s advantage rested on them being able to use the full extent of their performance advantage at the end of a stint. And in Singapore, where a Safety Car appearance is an ever-present threat, that was always going to be in doubt.

Sure enough on lap 13 Nico Hulkenberg and Felipe Massa went for the same piece of track at turn three and the result was one smoking Force India deposited into the barriers. A virtual Safety Car period was declared immediately, but with several drivers having already made their first pit stops the leaders’ course of action was a no-brainer: they all came in to change tyres.

“I think it was pretty straightforward when to stop,” Vettel explained afterwards, “because you obviously take the advantage of losing less time through the pit lane.”

For once the only Mercedes to lead the race was Bernd Maylander’s AMG GT S after the VSC was replaced with the real deal. Behind him Vettel queued up in front of a vexed Ricciardo, who knew he’d just lost his “best chance” to win. Kimi Raikkonen was next, and like the leading pair had also taken on another set of super-soft tyres.

Daniil Kvyat lost his grip on fourth place as he had pitted before the VSC period, and therefore was jumped by the two Mercedes drivers. The silver cars had switched from the super-softs to the softs, knowing they could return to super-softs for an attacking final stint if the race stayed green for long enough. But, for the most bizarre of reasons, it didn’t.

“Some guy’s running across the track!”

Heading out of the revised section of track for the 37th time, Vettel was astonished to discover a man wandering across the track, away from the racing line.

“I had to look again because I wasn’t sure whether I had a problem with my eyesight,” he recalled. “I went on the radio and said ‘some guy’s running across the track!'”

The Safety Car was immediately called out for a second time, leaving Ricciardo to curse his luck again.

“Seb learned a little bit from the first stint – started off a little bit easier in the second stint, then broke away. Then I think again as the laps ticked down I was probably able to make the tyres last a bit better on the option and close in, but then Safety Car again.”

“So, thanks to the guy on the track, appreciate it,” he added ironically. “I was tempted to swerve, clip him!”

However Vettel believed he had Ricciardo handled without the reappearance of the Safety Car.

“I knew that it’s impossible for Daniel, for anyone, to go 40-odd laps on the [soft] tyre, it will just fall apart at the end,” he said. “So I think some 35 or 36 laps to go, I knew we were approaching the pit stop window plus I knew that one of the Mercedes was on the [soft] tyre, which obviously allows them to be on the option for the final stint, so I said, ‘OK a couple of laps to go’.”

“When the pit stop window more of less opened for the final stint, allowing to finish on the [soft], to go for it, open a gap, put some three or four seconds between me and Daniel, so that we can react in case he dives into the pits and he doesn’t get the undercut. So it worked pretty well.”

While Vettel consolidated his advantage in the final run to the flag, Raikkonen was having an increasingly difficult time. “Once we started to push I started to struggle straight way with the same issues with the rear end,” he said after losing 17 seconds to Vettel over the final 20 laps.

That might have been a problem for Raikkonen had his closest challenger dropped out between the two Safety Car periods. Lewis Hamilton reported a loss of power and despite thorough attempts to solve the problem by changing settings on the engine while he was circulating, and further efforts after he came into the pits, Mercedes finally had to admit defeat.

Nico Rosberg inherited the fourth place which had been occupied by his team mate. But it underscored the depth of Mercedes problems in Singapore that he too had experienced a pre-race scare when his engine cut out, briefly raising fears of a repeat of his retirement 12 months ago.

He made it to the chequered flag, however, followed by Valtteri Bottas. The Williams driver had to nurse a gearbox problem in the closing stages – another had claimed his team mate earlier on.

There were a spate of drivetrain failures involving other cars: both McLarens retired and both Toro Rossos experienced gear shift problems. Some of these were clustered around the same point on the track near turn 19. In previous years teams have identified a source of electrical interference near the Andersen bridge which has caused problems, and it may be that another has been discovered.

In what has become something of a tradition at Singapore, the final laps saw those who tried to eke their tyres out until the end fall prey to those who had pitted. Sergio Perez was a notable exception, taking seventh behind Kvyat after repelling the recovering Toro Rossos.

Despite failing to get away at the start – the second race in a row this has happened to someone – Max Verstappen used the Safety Cars to his advantage as he climbed back up to eighth place. He didn’t think much of Toro Rosso’s later order for him to let his team mate through, however.

“Just do it,” race engineer Xevi Pujolar told Verstappen as Carlos Sainz Jnr closed in on fresher tyres. But it turned out Sainz wasn’t gaining as quickly as he needed to, and after the race the Toro Rosso team principal vindicated Verstappen’s defiant stance.

The Toro Rosso pair had already passed the struggling Lotus drivers, but Jenson Button found Pastor Maldonado predictably happier to cause an accident than concede a position he was inevitably going to lose. First he turned in on Button as the McLaren drew alongside at turn 16, then having left the track completely he rejoined in front of the McLaren and, despite the obvious speed difference between the two, chopped in front of Button again, causing contact.

“It’s a very narrow corner where it happened and there was no chance for him to overtake,” Maldonado said of the point on the track where his less reckless team mate was passed by Verstappen a few minutes later without incident. After the race Lotus (who may be about to become Renault) announced Maldonado’s contract has been renewed, so we can expect at least another 12 months of this nonsense.

Vettel bagged his third win of the year just under a second and a half in hand over Ricciardo. It had been an eventful grand prix, but a somewhat unsatisfying race, the two interruptions having ensured the leader was never really tested.

Even so, the outcome of the race was remarkable. Where had Mercedes’ pace gone? Their vulnerability on the softer tyres, the tougher enforcement of tyre pressure and camber limits, the lessening of their engine performance advantage at a track like Singapore and, in all likelihood, other as-yet unclear factors may all have contributed.

Before all that became apparent it seemed an inevitable that F1 would leave Singapore with Mercedes having chalked up another victory. During the build-up much was made of the possibility Hamilton would match Ayrton Senna career stats by winning his 41st race in his 161st start.

But instead of seeing one driver equal Senna, we saw another one surpass him. Vettel’s 42nd career victory was a milestone in that sense, and it could yet prove to be even more significant.

It had been five years since a Ferrari qualified on pole position in a dry session and then went on to win the race. Mercedes’ dominance is surely not going to come to a complete stop so suddenly.

Nonetheless after the race Ferrari could talk about building their own new chapter of success. The once-dominant silver cars were clearly beatable in Singapore and that will have reinvigorated the opposition. More difficult days for Mercedes may lie ahead.