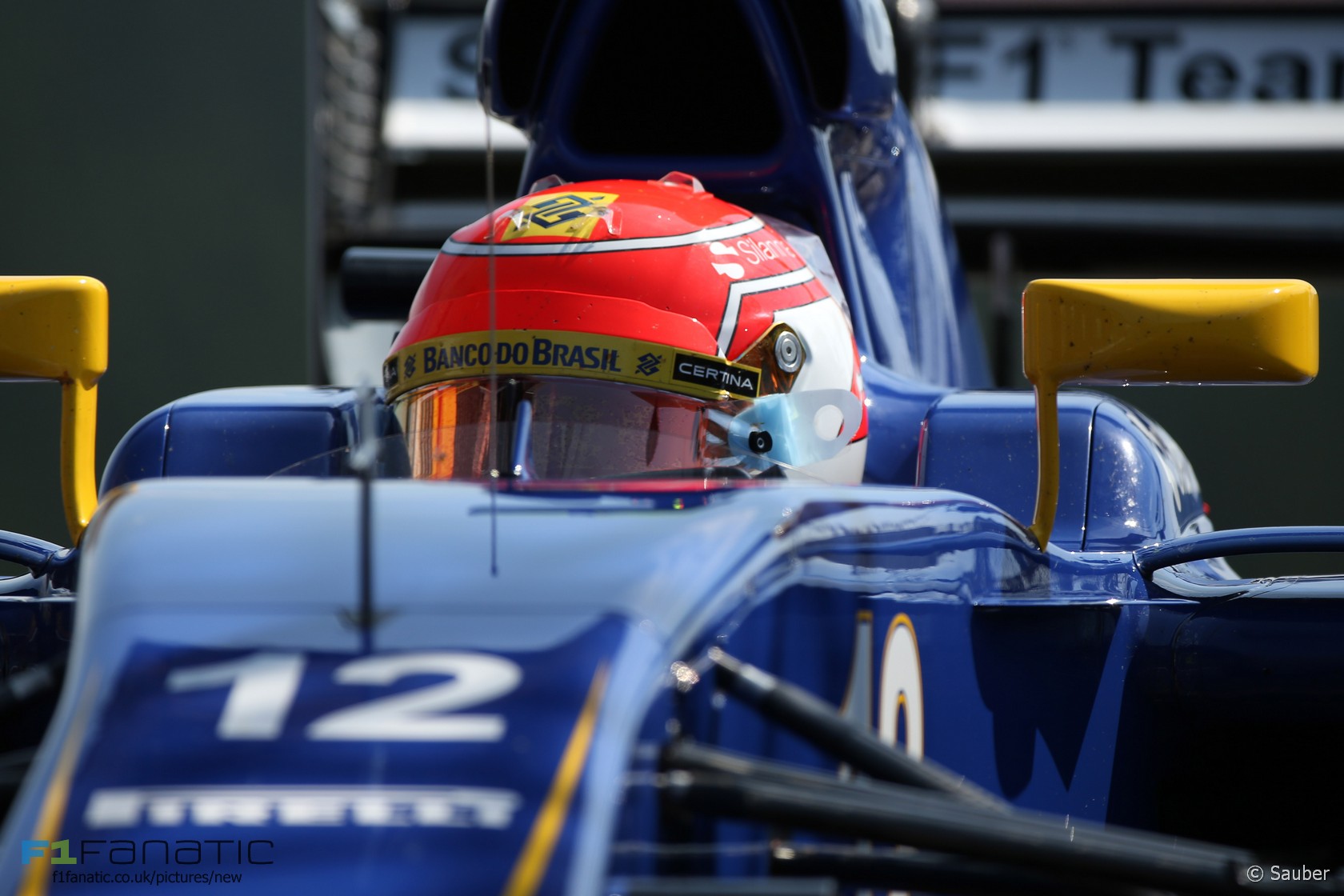 Felipe Nasr’s first season in F1 got off to a very promising start. On a difficult weekend for the Sauber team, lacking any prior knowledge of the circuit and having missed the first practice session, Nasr started inside the top ten and brought his car home in an excellent fifth place with Daniel Ricciardo breathing down his neck.

That set a high benchmark for the rest of the season, one he wasn’t able to equal as Sauber’s limited development meant their car became gradually less competitive. But Nasr continued to plug away and demonstrated his improvisational skills again in Russia where he took his second-best result of the season – sixth place – by running a long stint on super-soft tyres despite not having used them in practice.

Nasr was plainly frustrated at times by the lack of progress the team made with their car and was frustrated further by recurring braking problems, notably in Canada, Austria and Mexico. There were a few unfortunate errors as well – a high-speed crash in Canada which occurred when he triggered his DRS, and a collision with team mate Marcus Ericsson at the Circuit of the Americas which ruined his race.

By the final races of the season Sauber often only had the McLaren drivers for company and points were increasingly rare, making the haul Nasr had scored for the team at the beginning of the season all the more valuable.

A consistent finisher and marginally quicker than his more experienced team mate over the year, Nasr gets the nod from the two Sauber drivers, but there is clearly room for improvement when he returns next year.

Australia – Given that he hadn’t driven around the Albert Park circuit before, that Sauber don’t have a simulator for him to use and the team didn’t run in first practice, Nasr did a first-rate job to get his car into Q3 and bring it home in fifth place. He navigated the turn one trouble spot well and withstood race-long pressure from Ricciardo.

Malaysia – Never looked happy with his car’s set-up all weekend, though missing the first practice session while Raffaele Marciello drove didn’t help. Damaged his front wing in contact with Raikkonen at the end of lap one and so made the first of four pit stops on lap two. He did set the fourth-fastest lap of the race, however.

China – Performed well in qualifying to secure his best grid slot of the season so far with ninth. Passed by Verstappen in the first stint and then struggled to catch the Toro Rosso back in the final section of the race. Gained eighth from Verstappen after the Toro Rosso stopped, but will likely be satisfied with his afternoon’s work.

Bahrain – Qualified ahead of Ericsson but fell behind him at the start. A problem with his power unit meant he was out-gunned on the straights, and he finished the race stuck behind Alonso’s McLaren.

Spain – Blamed the Sauber’s lack of downforce for an inability to get the most from either the medium or the hard tyre, and said his finishing position of 12th was the best his car was capable of.

Monaco – Having also gone out in Q1, Nasr did well to salvage points in a car which plainly lacks downforce and development.

Canada – A nasty-looking crash in final practice was blamed on Nasr hitting the DRS button while he was weaving to warm his tyres up. Mercifully only his pride and car were damaged. Suffered a lack of power from the start of the race and had to cope with overheating brakes as well.

Austria – Fifth-quickest in first practice and was satisfied to reach Q3, although he was another driver who was hampered by the yellow flags Mercedes caused. Might have been able to hang on for the final point had his brakes not overheated – a problem which delayed him in Canada as well.

Britain – Didn’t get his tyres in the right temperature range in Q1 and was eliminated. A gearbox fault on his reconnaissance lap meant he was a non-starter.

Hungary – Struggled with overheating tyres in qualifying and lined up 19th. An anonymous weekend continued into the race, where he complained of being stuck in traffic and was 11th behind Ericsson at the flag.

Belgium – Looked quick in practice but was knocked out in Q3. Not for the first time this year he had braking problems in the race, and a slow puncture in the final stint delayed him further.

Italy – Picked up a puncture in the first-corner melee which dropped him out of contention for points.

Singapore – Didn’t expect to go out in Q1 but admitted he is still struggling to get the most out of the super-soft rubber. He made a conventional two-stop strategy work in the race to claim the final point.

Japan – Qualified within a tenth of his team mate but pulled into the pits shortly before the end with an unspecified problem having fallen to 17th place.

Russia – His and Sauber’s best result since Australia was assured even before Raikkonen’s penalty promoted him to sixth. Nasr qualified particularly well, taking 12th on the grid after reaching Q2, and in the race he ran the longest opening stint of anyone on super-soft tyres despite not having used them during practice.

United States – Both Sauber drivers had a lot of work to do at an unfamiliar circuit, but despite taking points for ninth Sauber team principal Monisha Kaltenborn was unhappy after Nasr hit Ericsson on lap one. “It is not an excuse that one driver did not know the track before and we were not able to run many laps here,” she said.

Mexico – Struggled with the low-grip surface and failed to progress beyond Q1. He wasn’t able to keep on top of his brake problem in the race and when the Safety Car came out they soon cried enough.

Brazil – Didn’t look capable of making the cut for the top ten but qualified a strong 11th before picking up a penalty for impeding Massa. With few retirements, points never looked likely, though he battled convincingly with Grosjean in the opening laps and got a big cheer for his pass on Button.

Abu Dhabi – Picked up front wing damage in the contact with Alonso which forced an early pit stop and left him on the back foot strategically.

I had almost forgotten he was in F1 after Australia to be honest but he has performed well.
@Glynh

What’s your verdict on Felipe Nasr’s 2015 season? Which drivers do you feel he performed better or worse than? Have your say in the comments.

Add your views on the other drivers here: