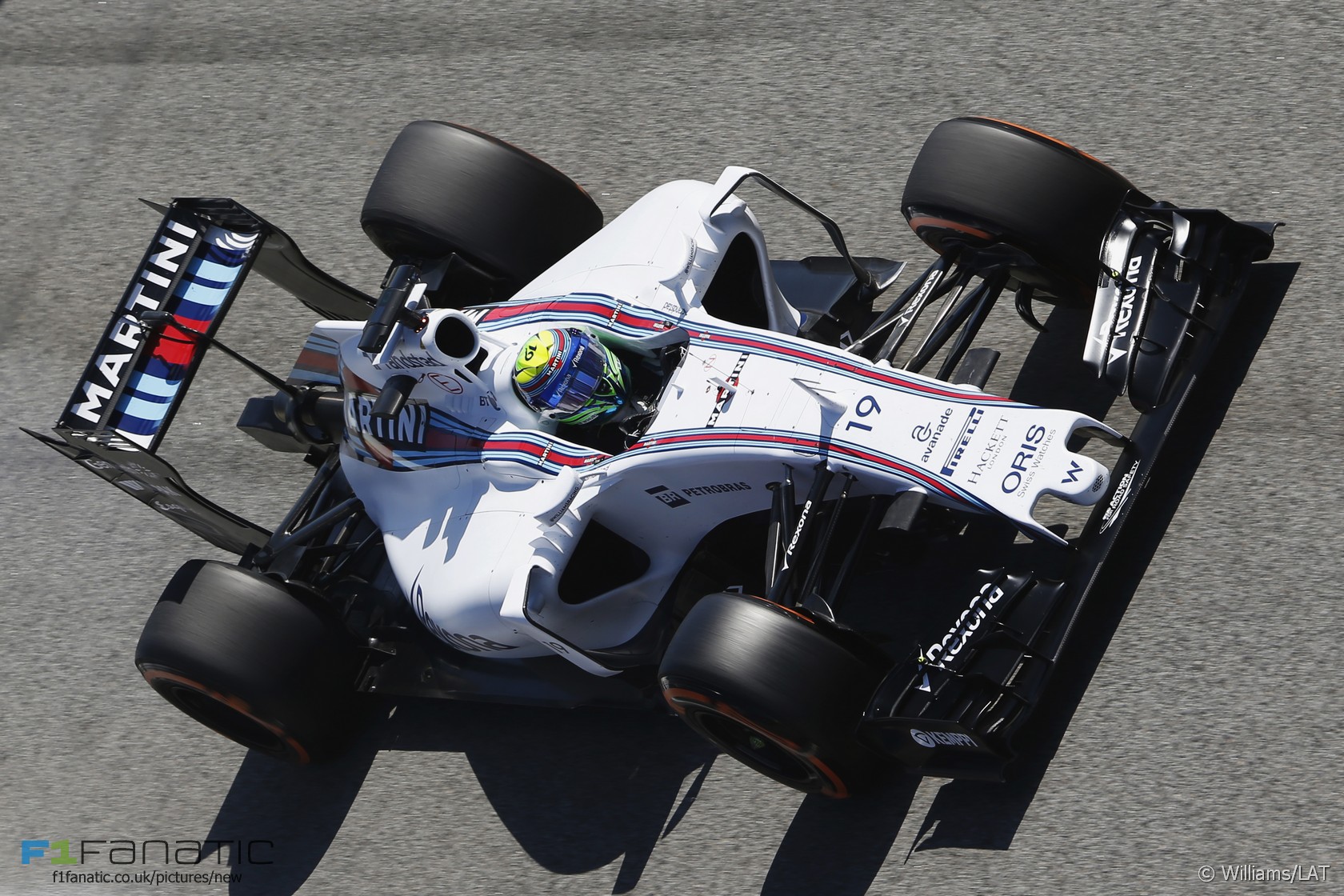 Last year Felipe Massa endured a season dogged by misfortune, then hit a patch of strong form in the final races. This year was something of the opposite – the cards fell in his favour but he didn’t always play them well.

At first he seemed to have carried the momentum from 2014 with him: he lined up third on the grid in Australia and finished fourth, although his was the sole Williams in the race after team mate Valtteri Bottas injured his back during qualifying.

Massa consistently gathered points in the first half of the season – barring Monaco where the FW37 was well off the pace – and mounted a fine recovery run to sixth in Canada after dropping out in Q1 with a turbo failure. Bottas was on the podium that day but Massa made it to the rostrum soon after in Austria, thanks to a slow pit stop for Sebastian Vettel.

While Massa’s starts were not the strongest part of his game – he lost more places on lap one than any other driver – he nailed his getaway at Silverstone and took the lead for 19 laps, the most convincing position a Williams has been in for many years. It was only a matter of time before the Mercedes pair demoted him, however.

A second podium followed in Italy, this time with Bottas hot on his heels. At this point Massa still led his team mate in the points standings but Bottas decisively pulled ahead over the final rounds.

There were several weekends where an anonymous Massa slipped towards the back of the Williams/Ferrari/Red Bull scrap: Belgium, Hungary and Mexico. He branded his home race in Brazil a poor showing even before his inconsequential disqualification due to a technical infrongement. A trio of collisions spoiled several races – with Nico Hulkenberg in Singapore (his rival’s fault), with Daniel Ricciardo in Japan (a racing incident) and with Alonso in America (for which Massa was to responsible).

In the end it was telling that even in a year when he had the rub of the green compared to his team mate, Massa still ended up behind Bottas in the points table.

Australia – Close to his team mate’s pace in practice but didn’t look like out-qualifying the other car until Bottas suffered his back problem. Massa pipped both Ferrari drivers to third, albeit a daunting second and a half off the Mercedes. He didn’t have the pace to keep Vettel behind in the race, but brought the sole remaining Williams home in a useful fourth.

Malaysia – Said the team is still lagging behind in wet conditions after qualifying. He lined up ahead of Bottas and make a good start to take fifth and would have finished there had he not lost out to his team mate at the end.

China – Damaged a front wing during second practice when his rear wing stalled, sending him into the barriers. Impressive lap in qualifying put him fourth on the grid but he lost out to Raikkonen at the start. Ran fifth for the entire race, powerless to catch the leading pack but comfortably the quicker of the two Williams.

Bahrain – Qualified behind Bottas but suffered a greater setback before the race began when a technical problem forced him to start from the pits. He suffered a further setback when he was tagged by Maldonado early on. An aggressive strategy helped him find clear air late in the race, but attempting to nurse a set of medium tyres proved too ambitious, allowing Perez and Kvyat to capitalise.

Spain – Blamed an error at turn three for his disappointing qualifying performance. Started well but ran wide at turn two, losing some of the advantage he gained, but he was able to recover sixth using a three-stop strategy.

Monaco – Qualified better than Bottas but was crowded out at the start, picked up damage, and never really figured in the race from there.

Canada – A problem with Massa’s turbocharger robbed him of power in qualifying and consigned him to a 15th-placed start. Some well-worked passes helped him make up ground, including a superb side-by-side dice with Ericsson, as did the race’s longest stint on the super-soft tyres – 33 laps. He capped a fine damage limitation run by taking sixth place off Maldonado.

Austria – Having brought a raft of updates for the FW37 Williams played their cards close to their chest as usual on Friday, when Massa had a near-miss with Ferrari team principal Maurizio Arrivabene in the pit lane. Out-qualified Bottas thanks in part to the yellow flags, taking fourth on the grid. He ran in that position in the race until Vettel’s slow pit stop handed him his first podium finish of the year.

Britain – Williams seemed further from the pace than usual on Friday but it all came good on Saturday as they ejected Ferrari from row two, led by Massa. A brilliant start then propelled him into the lead, but his team mate was clearly quicker at this point and Massa came under pressure. His first pit stop was slightly slow as the team chose to clear debris from his rear wing, but even without that he wouldn’t have stayed ahead of Hamilton (though it might have been less close with Rosberg). When the rain fell Rosberg passed him easily at Village, and he was jumped in the pits by Vettel, falling to fourth.

Hungary – Eighth on the grid meant he was last in the Ferrari/Red Bull/Williams qualifying battle, and sloppy parking on the grid meant a five-second penalty. That dropped him back in the pack, and an early switch to soft tyres (even earlier than Kvyat’s) didn’t work out – a third pit stop was required, which dropped him out of the points.

Belgium – After a minor technical problem delayed his start to Q1, a poor final sector in Q3 left him sixth on the grid, promoted one place by Grosjean’s penalty. He lost three places at the start and was passed by Kvyat shortly afterwards as he struggled on the soft tyres initially. Lacking the expected performance on the straights, Massa was also passed by Kvyat before the end of the race and finished where he started.

Italy – Couldn’t improve on his first run in Q3 but it proved good enough for fifth on the grid ahead of his team mate. His track position advantage proved useful at the end of the race when Bottas pushed him hard, but wasn’t able to find a way past.

Singapore – “Not a fantastic track for us”, admitted Massa. He only had one set of new tyres left for qualifying and made an error on his run, leaving him ninth. He pitted one lap in front of Hulkenberg in an attempt to stay in front of the Force India, but the pair tangled as Massa rejoined the track. A puncture from that spoiled his race, and a gearbox failure later ended it.

Japan – Having been fourth in Q2 he lined up fifth on the grid, and the contact with Ricciardo spoiled his race. He lost more time than the Red Bull driver getting back to the pits and only had the two Manors behind him at the flag.

Russia – Last year a technical problem in qualifying left Massa languishing near the rear of the field in Sochi – this time he largely had himself to blame following an error in Q2. He recovered well in the race, however, using the alternative strategy of starting on the soft tyres and staying out during the Safety Car period. He passed Kvyat and was close enough to Raikkonen to demote the wounded Ferrari on the final lap.

United States – Incurred Alonso’s wrath by punting him into a spin at the start, and dropped out soon afterwards with a damper problem.

Mexico – “A terrible lap” reflected Massa after understeering off at turn seven on his way to seventh on the grid. Couldn’t follow his team mate past either of the Red Bulls in the race, losing out to a lunge from Ricciardo, and admitted afterwards he had struggled for rear grip.

Brazil – Described this as a “race to forget” even before he was thrown out of the results for having illegal tyre temperatures. Ill at ease in the car from the word go, he scraped through Q1 and Q2 to claim a place in the top ten, but slipped back from his team mate in the race.

Abu Dhabi – Passed Sainz soon after the start, then spent most of the rest of the race staring at Hulkenberg’s rear wing. Picked off the ailing Kvyat for eighth.

What’s your verdict on Felipe Massa’s 2015 season? Which drivers do you feel he performed better or worse than? Have your say in the comments.

Add your views on the other drivers here:

The 2015 F1 Driver Rankings will continue next week with the top ten drivers of the year.