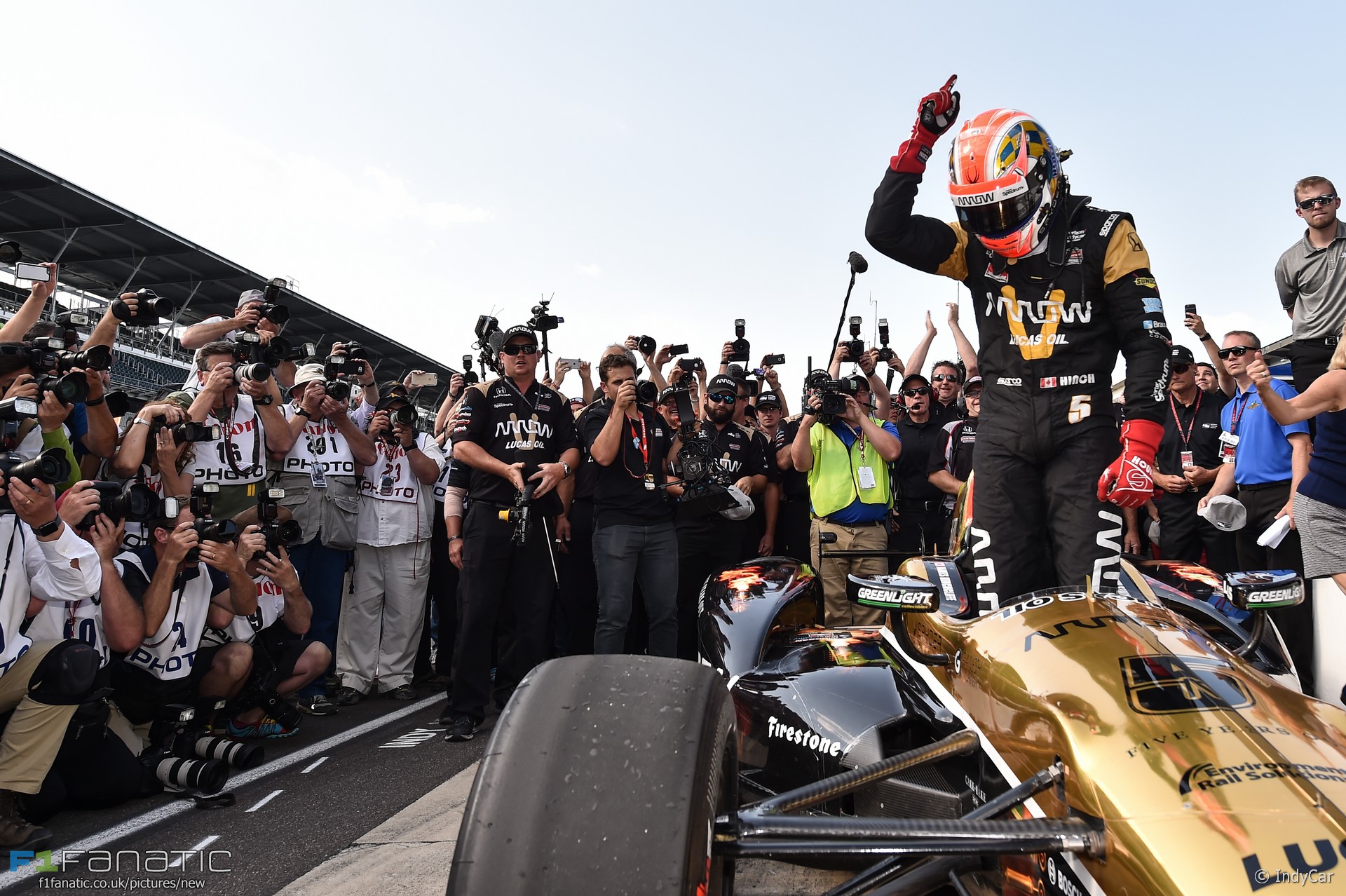 It was a weekend of major crashes in several series but qualifying for the Indianapolis 500 did not see a repeat of last year’s flips. Sunday’s decisive session for the 100th running of the race saw pole position won with the final lap of the day.

Stoppages in the European Formula Three championship and World Rally Championship told a tale of serious incidents in both, while a near-waterlogged Spa also produced its share of action.

And the Formula E championship moved into a decisive phase after a team orders row during Saturday’s race in Berlin. Here’s the pick of last weekend’s action.

Twelve months after a violent crash at Indianapolis which pierced a femoral artery and almost cost him his life, James Hinchcliffe returned to the speedway to claim an emotional pole position for Sunday’s 100th running of the Indy 500.

The Schmidt driver, who only returned to full-time racing at the beginning of this season, headed both days of qualifying on Saturday (video above) and again on Sunday. Hinchcliffe has started from second place eight times in IndyCar but on Sunday will lead the field for the first time in his career.

The drama began on Saturday when Max Chilton and Pippa Mann hit the wall, the latter due to a rear wing flap failure. Last year’s winner Juan Pablo Montoya missed out on a place in the ‘fast nine’ shoot-out for pole position and had to make a second attempt at qualifying after a bin bag wrapped itself around his front wing.

Josef Newgardewn held pole position until being demoted by Hinchcliffe and will start from the middle of the three-car front row joined by 2014 race-winner Ryan Hunter-Reay.

Ryan Tveter span through the gravel trap at turn six, coming to a stop on the apex with a cloud of dust behind him. He was hit by an unsighted Zhi Cong Li whose car was launched into the air and also by Pedro Piquet, who dealt Tveter’s car a glancing blow.

Li, who briefly lost consciousness following the impact, was taken to hospital and is sue to receive surgery on multiple heel fractures. He also fractured several vertebrae which do not require surgery. Tveter, Li’s Carlin team mate, was discharged from hospital with a badly bruised knee.

The remaining two races saw comfortable wins for Lance Stroll. He opened out a 38-point championship lead over Ilott, who was demoted from second to fourth in race two due to a track limits penalty – a theme of the weekend for many drivers.

George Russell was promoted to second ahead of Niko Kari. The Safety Car made a brief appearance on the second lap when Ralf Aron’s front wing got stuck under his car following a spin and scattered debris across the track.

Maximilian Gunther held on to third in the championship after passing Kari to join Stroll and Ilott on the podium in the final race.

Kris Meeke made a triumphant return to the World Rally Championship after a two-round absence. The Citroen driver, who ran strongly in the first two rounds before hitting trouble, led from stage two and built up a strong lead early on to ensure he’d collect his second win.

However stage five was overshadowed by a catastrophic crash for the winner of the previous round, Hyundai’s Hayden Paddon. Despite running second on the road Paddon was keeping pace with Sebastien Ogier until a minor mistake led to the complete destruction of his car. The i20’s hot exhaust ignited the bushes he had stopped in, forcing both Paddon and co-driver John Kennard to abandon the cockpit.

Ott Tanak crashed in the same place, but quick thinking and work from him and spectators meant he managed to pull his car clear of the ever growing fire, though damage still ruled him out of the rest of the rally.

Various other drivers encountered problems during the rally, but Meeke held on to win. Andreas Mikkelsen overcame team mate Ogier by mere seconds on the final day, aided by a puncture for the world champion on Sunday’s opening stage.

Sebastien Buemi won the Berlin ePrix to cut the gap to Lucas di Grassi to a single point with two races remaining. Buemi’s cause was aided by di Grassi’s team mate Daniel Abt who ignored calls from the Abt team to let Di Grassi by.

Di Grassi had moved up from eighth on the grid, passing Jean-Eric Vergne and Nico Prost on his way, while Sam Bird was effectively taken out of the running when he was called in for a loose front wing end section. Di Grassi jumped Prost after saving his energy enough to run an extra lap, but Buemi was comfortably ahead of Abt in second.

With only the double header in London left, di Grassi and Buemi are the two remaining drivers realistically in with a shout of the title, though Bird is mathematically still in touch, 59 points behind with a maximum of 60 remaining.

With Mathieu Vaxiviere demoted from pole position to last due to a technical infringement, and Matevos Issakyan suffering a sizeable crash at Raidillon on his reconnaissance lap, race one did not start well for SMP Racing. But the team bounced back to claim their first Formula V8 3.5 victory the following day.

Egor Orudzhev scored his first win of the season in race one despite a destroyed front=right tyre which he had locked repeatedly while fending off Tom Dillmann. Orudzhev trimmed his wing out as if he was running at Indianapolis and was un-passable on the straights and was repeatedly able to retake the lead from Dillmann.

By the final lap Orudzhev had half-a-dozen cars queued up behind him, including Johnny Cecotto Jnr and Pietro Fittipaldi who tangled at Fagnes. Louis Deletraz, who briefly passed Dillmann but succumbed to a brilliant re-pass, was third.

Saturday’s Spa sunshine was replaced by near-torrential rain on Sunday. The cars trundled off behind the Safety Car but just as it seemed too wet to go ahead race control threw the green flag.

The result was a predictably chaotic race. Isaakyan spun to a halt at Les Combes and Cecotto mounted his car on top of Roy Nissany’s at Eau Rouge. Following a Safety Car period Dillmann inherited the lead but spun it away, allowing Vaxiviere to win. But six podiums from as many races leaves Dillmann with a healthy 37-point lead.

BMW dominated the opening race of the weekend with five of their cars in the top six as 2014 champion Marco Wittmann took the win from pole ahead of Tom Blomqvist in positions that were settled in the first corner. Edoardo Mortara was the only Audi in the top six, taking the final spot on the podium. Mattias Ekstrom was spun out early on by Maxime Martin and only finished 16th while Mercedes drivers Christian Vietoris and Daniel Juncadella replicated Hamilton and Rosberg by taking one another out.

Meanwhile race two was won by former F1 driver Timo Glock, who overtook Jamie Green on the second lap and held the lead until the end. Green lost a further place later on the Ekstrom – who’d come from eleventh on the grid – but still completed the podium. After the race an unhappy Antonio Felix da Costa accused Audi, who engineered a deliberate crash in this race last year, of taking him out.

As you can see my car is not blue. Got pushed off the track today when running P3 in a really dirty move. pic.twitter.com/PrAZemE9x6

Tim Slade took his first win in Supercars at Winton – then immediately followed it with a second. The Holden drier led from pole ahead of Scott McLaughlin and Mark Winterbottom to take the win in race one. McLaughlin and Winterbottom fought hard for the minor podium placings while further back James Courtney was involved in incidents with Lee Holdsworth and Cameron Waters, leading him to be investigated by the stewards and finishing in 19th.

In race two, Slade again beat Winterbottom, with Fabian Coulthard taking third. Having started fourth, Slade came out of his pitstop with a commanding lead which he never relinquished once he got it. Shane Van Gisbergen and Waters completed the top five, while Courtney again had a troubled day – contact with pole-sitter Chaz Mostert meant he lost 13 laps to repairs and finished 25th and last.

Leonardo Pulcini and Jack Aitken shared the wins again, each passing the other to win in the two races at Spa-Francorchamps. Euroformula Open’s stand-out pair have monopolised the top two finishing positions for the last three races.

A terrifying back flip for Nikita Zlobin at Raidillon brought the Safety Car out in race one. The incident was caught on camera by a fan at the track (below). Igor Walitko almost suffered the same fate in race two but remarkably continued to score points for ninth.

Next weekend there are two famous races; Formula One and GP2 head to Monte Carlo for the Monaco Grand Prix while the 100th running of the Indy 500 takes places at the Indianapolis Motor Speedway.

Thanks to Robert Mathershaw (@Mathers) for contributing to this article.

22 comments on “Happy ending after weekend of huge crashes”