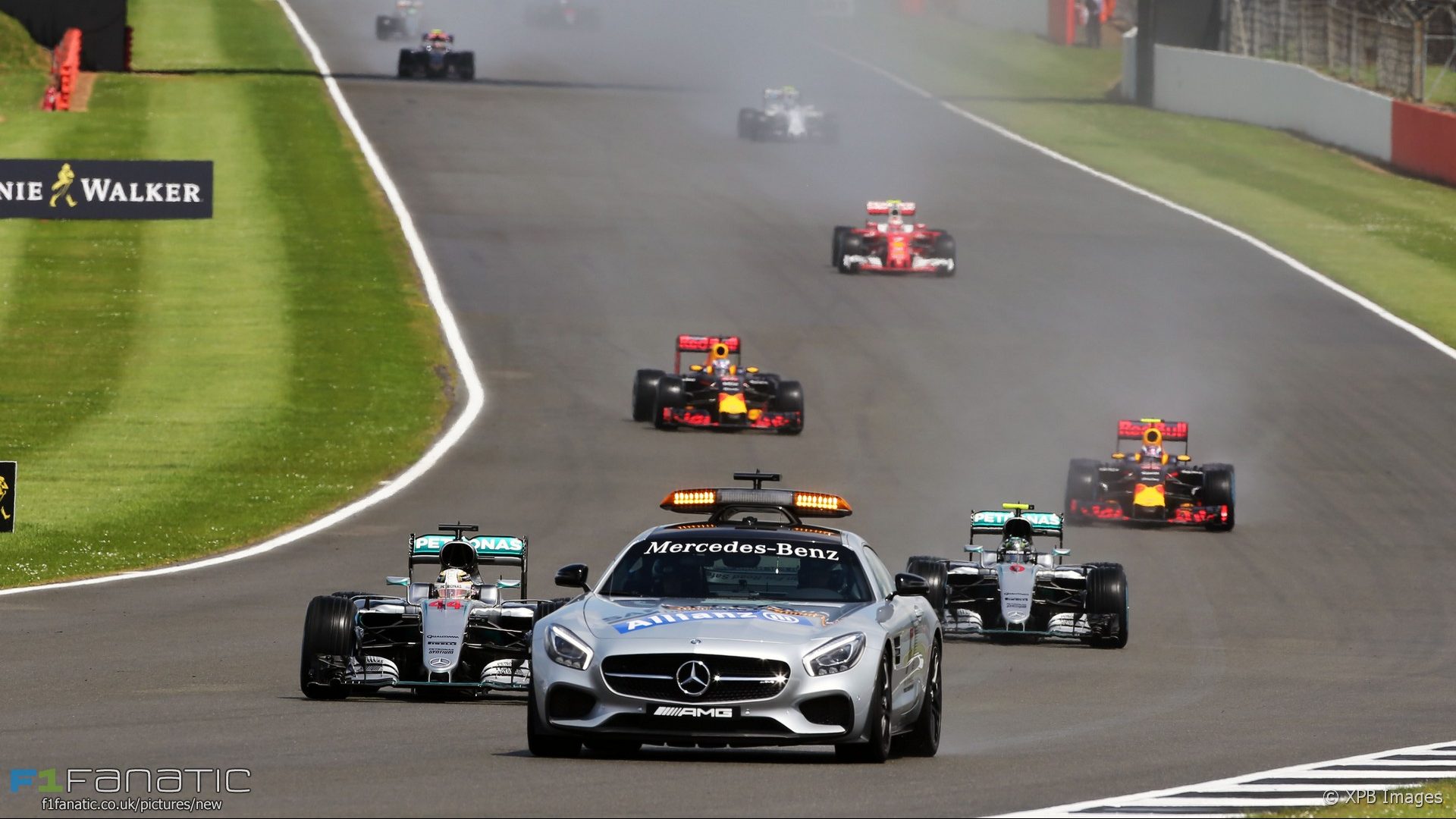 Rolling starts behind the Safety Car will remain possible in 2017 despite new rules to increase the use of standing starts in wet conditions being introduced.

New regulations have been drawn up for next year following criticism of the use of the Safety Car to start the Monaco and British Grands Prix this year, which were affected by rain.

Under the new rules, published today, races may begin with a Safety Car period which is followed by a standing start. However if the race is suspended during that period a rolling start behind the Safety Car will be used to resume the race.

Laps spent behind the Safety Car at the start of the race will count towards the overall race distance except for the initial formation lap.

Each lap completed while the Safety Car is deployed will be counted as a race lap, except the first lap when the procedure set out in 39.16 is followed (see also Article 5.3).
39.14

If track conditions are considered unsuitable to start the race at the scheduled time the start of the formation lap will take place behind the Safety Car. If this is the case, at the ten minute signal its orange lights will be illuminated, this being the signal to the drivers that the formation lap will be started behind the Safety Car. At the same time this will be confirmed to all teams via the official messaging system.

When the green lights are illuminated the Safety Car will leave the grid and all drivers must follow in grid order, no more than ten car lengths apart, and must respect the pit lane speed limit until they pass pole position. The Safety Car will continue until conditions are considered suitable for racing.

a) If a car is delayed when leaving the grid and cars behind cannot avoid passing it without unduly delaying the remainder of the field, or
b) If there is more than one car starting from the pit lane and one of them is unduly delayed.

In either case drivers may only overtake to re-establish the original starting order or the order the cars at the pit exit were in when the formation lap was started.

Any driver delayed in either way, and who is unable to re-establish the original starting order before he reaches the first Safety Car line on the lap the Safety Car returns to the pits, must enter the pit lane and may only join the race once the whole field has passed the end of the pit lane after the start of the race.

A penalty under Article 38.3(d) will be imposed on any driver who fails to enter the pit lane if he has not re-established the original starting order before he reaches the first Safety Car line.

With the exception of those cars required to start from the pit exit, once the Safety Car has entered the pit lane all cars must return to the grid, take up their grid positions and follow the procedures set out in Article 36.9 to 36.13. A penalty under Article 38.3(d) will be imposed on any driver who enters the pit lane at this time.

However, if the race is suspended before the Safety Car is called in, the procedures described in Articles 41 and 42 will be followed and there will be no standing start

14 comments on “Safety Car starts not abolished in 2017 rules”