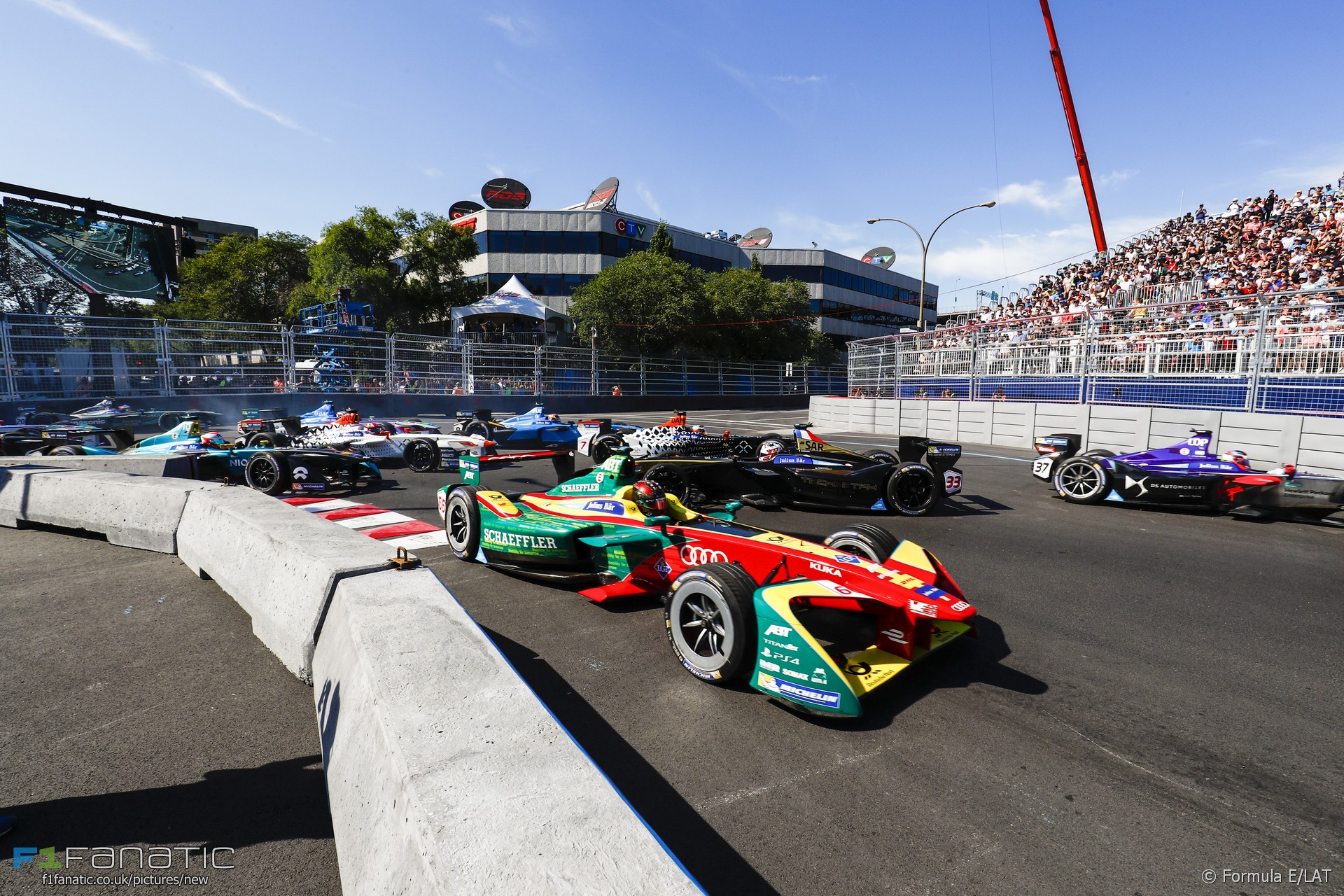 Formula E’s title-deciding double header provided a case study in how to throw a championship away and featured a bizarre post-race tirade.

And McLaren’s star junior had a mixed but mostly successful weekend at Spa-Francorchamps where Formula Three provided the curtain-raiser to the annual 24 hour race.

Lucas di Grassi came from behind to win the 2016-17 Formula E championship after season-long points leader Sebastien Buemi’s challenge fell apart on the streets of Montreal.

Buemi had missed the previous two races in New York while he was competing in the World Endurance Championship’s Six Hours of Spa. Nonetheless he arrived at the double-header finale with a ten-point lead over Buemi in the standings.

That was put in jeopardy when Buemi crashed his Edams Renault during practice for the first race on Saturday. While Di Grassi took pole, Buemi languished in 12th place, knowing he would have to switch to an untested, rebuilt chassis at the mid-race car change. While Di Grassi won as he pleased (above left) and took the championship lead Buemi’s recovery drive to fourth was, on the face of it, a good result.

Then Buemi’s weekend completely fell apart and with it went his self-restraint. First he tore a strip off Antonio Felix da Costa having mistaken him for Robin Frijns, who he tangled with during the race (below right). Then he was stripped of his fourth place when his car was found to be underweight. That meant Di Grassi went into the final race with an 18-point lead.

Jean-Eric Vergne ran di Grassi close in the final laps of the first race and finally ended his wait for a first win in Sunday’s race. All eyes were on the championship contest, but it proved an anti-climactic affair. Di Grassi lined up fifth with Buemi 13th after another poor session. Buemi lost more time when he was forced to pit to have a broken right-rear wing pod replaced.

Fifth place for Di Grassi was easily enough for him to secure the championship in a stark reversal of his fortunes 12 months ago, when a clash with Buemi ended his hopes of taking the 2015-16 crown.

Josef Newgarden became the fifth different driver to lead the IndyCar championship standings this year following his victory at Mid-Ohio. The Penske driver started from the front row for the first time this year and swept past pole sitter Will Power in a superb move approaching turn four to claim the lead shortly before his first pit stop.

A lively first 20 laps gave way to a more processional race thereafter. Pagenaud built up a lead of close to ten seconds before the race’s only full course caution, but had the lapped Esteban Gutierrez between him and his pursuers at the restart.

Power held off a feisty Graham Rahal for third, following by Simon Pagenaud and Takuma Sato. Alexander Rossi took sixth after tangling with team mate Ryan Hunter-Reay, who recovered to take either behind Helio Castroneves. Scott Dixon, who arrived in Mid-Ohio as the championship leader, could only manage ninth after an early second pit stop to cure a severe handling problem.

This was Newgarden’s second consecutive win and third of the season, and leaves him with a seven-point lead over Castroneves with four races remaining. Dixon and Pagenaud are both within 17 points of the championship leader.

https://www.youtube.com/watch?v=nT-mPT7eKyU
Lando Norris had the makings of a perfect weekend in Spa-Francorchamps. The Carlin driver took pole position for all three races and won two of them, but a first-lap collision meant he ended the second race point-less.

The clash between Norris and Guan yu Zhou let Ferdinand Habsburg in to take a surprise race victory from eighth on the grid. Joel Eriksson and championship leader Maximilian Gunther completed the podium while Norris was handed a three-place grid penalty for the contact, to be served in race three.

Norris was held responsible for the Zhou crash and given a three-place penalty for race three which put Callum Ilott on pole. But the McLaren junior racer stormed through to beat Eriksson and Zhou to the line for his fifth win of the season. A needless collision with Jake Hughes cost Gunther valuable points, leaving him 18 ahead of Norris and 26 ahead of Eriksson at the top of the table.

Esapekka Lappi came good on the high expectations set by his previous performances and took his first win in only his fourth appearance in a full WRC car. The Finnish driver won his home event while the championship contenders floundered.

Lappi was on pace from the very beginning with team mate Jari-Matti Latvala, but it wasn’t to be for the championship contender as his car let him down late on Saturday, handing Lappi a near-50 second advantage. Behind him another pair of Finns, Juho Hanninen and Teemu Suninen (the latter in his second event in a WRC car), battled with Elfyn Evans for second place. An error from Suninen on Sunday left him fourth, while Evans nabbed second on the final stage, but third was still a maiden podium for Hanninen.

In the championship battle, Sebastien Ogier has lost the lead after being forced to retire from the event following a crash on Friday morning. A side impact with a tree left his co-driver Julien Ingrassia with mild concussion and out of action for 15 days. This opened the door for Thierry Neuville to take advantage but he could barely limp through it as his Hyundai struggled for pace all weekend. Nonetheless Neuville scored enough points to put him level with Ogier, and ahead by dint of his three wins.

Kyle Busch held sway at Pocono, starting from pole position and never out of contention throughout the race’s 160 laps. He took the chequered flag for his first victory of 2017 six seconds clear of Kevin Harvick. He’s the 14th different winner in the series this year.

Ash Sutton continued the fine form he found before the summer break by winning the opening two races as the BTCC returned for the second half of the season.

Jack Goff took his maiden pole position ahead of the opener by a half a second – a margin usually unheard of in touring cars – but couldn’t hold back the fast-starting Subaru at the start. Sutton won ahead of Goff and Matt Neal.

Starting from pole position, Sutton likely expected an easier run in race two but he was hounded early on by Goff. Sutton eventually pulled away and took his second win and the championship lead. Colin Turkington and BMW team mate Rob Collard both passed Goff late on to take the final two podium positions.

The reverse grid race handed former championship leader Gordon Shedden a front row start and he made the most of it by winning the final race of the day despite initially losing out to Andrew Jordan’s fast starting BMW. James Cole got away well from pole position but was unable to match the pace of those around him in the opening laps, while Jordan led until the penultimate lap when his BMW slowed, allowing Shedden to win ahead of Collard and Turkington.

Sutton lost his newly-gained championship lead and slipped to fourth in the standings after he was eliminated early on when Rob Austin slammed into the side of him.

Video not available yet.

The 24 Hours of Spa that forms the centrepiece of the GT Endurance Series was won by Markus Winkelhock, Jules Gounon and Christopher Haase in the factory-supported Sainteloc Audi after a closely fought three way fight between them, the Bentley of Maxime Soulet, Andy Soucek and Vincent Abril and the AKKA ASP Mercedes of Raffaele Marciello, Michael Meadows and Edoardo Mortara.

Several contenders fell by the wayside early on, including the pole-sitting Ferrari of Giancarlo Fisichella, James Calado and Marco Cioci which suffered a crash after making contact with Marciello in the Mercedes. The Pro-Am category was won by Black Falcon Mercedes with Oliver Morley, Miguel Toril, Marvin Kirchhofer and Maximilian Gotz, while the Am class honours were taken by the Ferrari of Marco Zanuttini, Jacques Duyver, David Perel and Niki Cadei.

Sebastian Vettel took the last win in Formula One before the summer break ahead of team mate Kimi Raikkonen in Hungary. The Ferrari driver was struggling with bent steering for most of the race allowing Raikkonen to get close, but eventually held on. Valtteri Bottas came home third after Lewis Hamilton allowed his team mate through at the final corner of the race following an agreement earlier in the race.

Oliver Rowland cut Charles Leclerc’s lead in F2 after the Ferrari junior was thrown out of qualifying for a technical infringement. That also cost Leclerc what would have been a record-breaking seventh consecutive pole position. This put Rowland on pole which he duly converted to victory ahead of team mate Nicholas Latifi and Nyck de Vries, while Leclerc recovered to fourth after making up eight places on the opening lap and at one point overtaking three cars in one corner. Nobuharu Matsushita got a great start from fourth in the reverse grid sprint race to lead into turn one and carry on to win, with Rowland jumping from eighth to second and de Vries and Leclerc once again third and fourth.

Jack Aitken won from pole position in the opening GP3 race while his front row companion and team mate George Russell endured mechanical problems on the warm-up lap and failed to make the start. Nirei Fukuzumi and Anthoine Hubert completed an all-ART podium while Trident went one better in the second race, securing a top four lock-out. Giuliano Alesi took his second win in two weekends from Ryan Tveter and Kevin Joerg, who both scored their maiden podiums.

The following series are in action next weekend:

Thanks to Robert Mathershaw (@mathers) for contributing to this article.