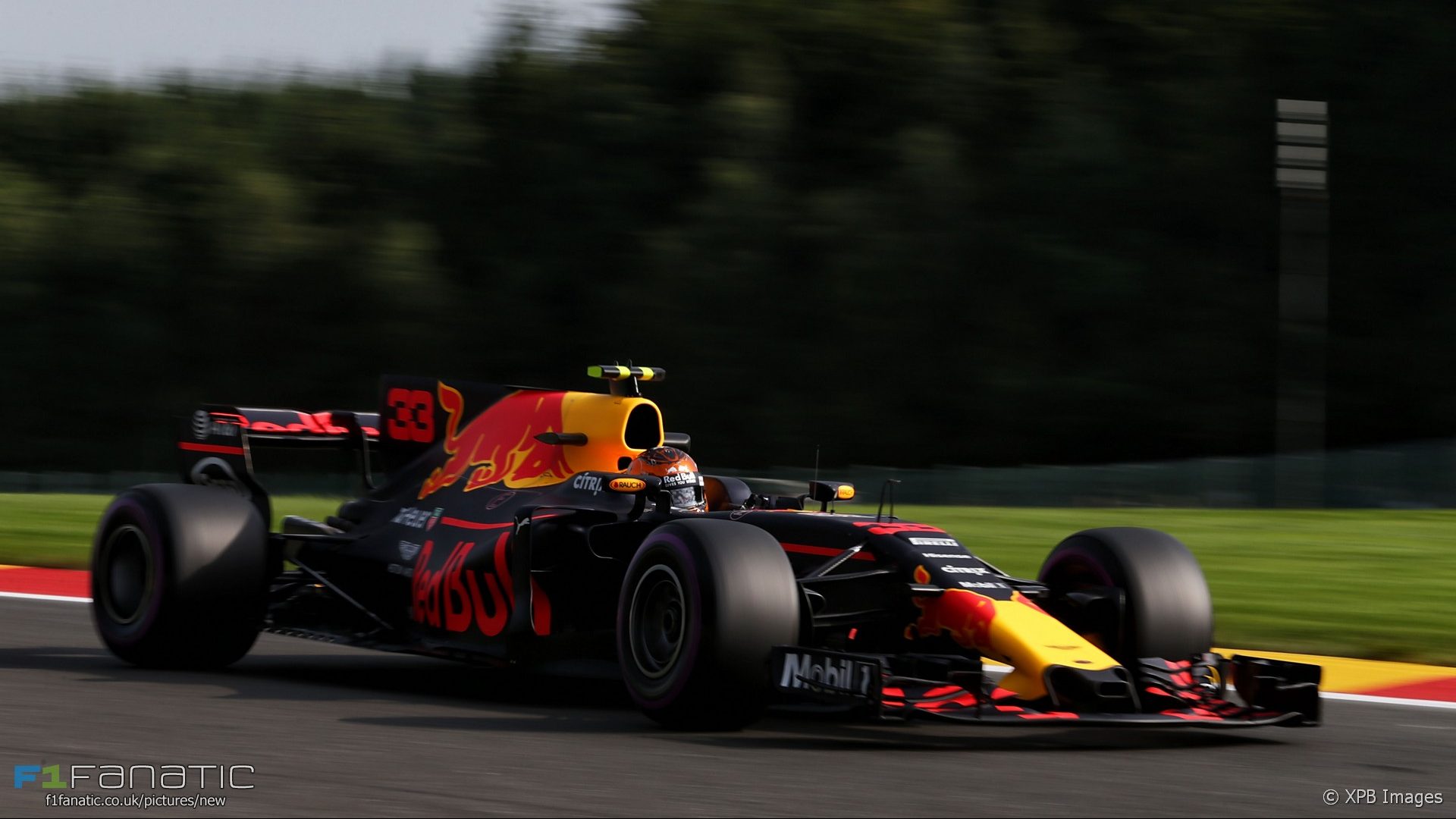 Here’s what he and the other drivers had to say on the radio.

Just five minutes into the first practice session after the summer break, Fernando Alonso was already suffering problems with his power unit.

Alonso: “I’ve finished the battery a lot.”
“OK we see it on the data.”

To Ocon: Front tyre temperatures on the cool side.”

Felipe Massa crashed heavily at the exit of Les Combes on his third lap, bringing his day to an early end.

To Ocon: “Tail wind into the final chicane.”

When the session resumed Stoffel Vandoorne reported he could still see red flags at some marshal posts.

Vandoorne: “There are still red flags around the track.”
“Copy. We have a ‘track clear’ message.”

Alonso had other problems besides his power unit.

“Just be careful switching DRS off into turn one and five it’s a little bit sluggish.”
Alonso: “DRS doesn’t work, it doesn’t come back.”

To Bottas: “Lewis reporting overheating quite quickly with this tyre.”

Hamilton: “Can you find me a gap?”
“OK you’ve got Palmer nine seconds back, behind him Valtteri another six seconds.”

Kvyat: “I had a very big misfire exit of last corner.”
“OK we check now.”

Hulkenberg: “Yeah the seat is getting quite warm.”
“OK Nico, understood.”

Grosjean: “Got a problem with the front-left locking, turn one and turn eight.”
“OK the temperatures are the same across the car.”

Valtteri Bottas went off at the exit of Fagnes, causing slight damagae to his car.

“We think we’ve got front wing damage so box and keep the speed down.”
Bottas: “Copy.”

“Do you want to go again?”
Ricciardo: “Can I start the lap and then assess it?”
“Yes.”
Ricciardo: “I can abort after turn nine.”

Kvyat: “Again I had a massive misfire and engine braking felt very strange in the last chicane. Quite strange engine behaviour.”
“Copy that”

Grosjean: “I’ve got the same problem with the front-left under braking.”
“Understood.”

Alonso: “Again it doesn’t work.”
“OK understood. We’d like to keep the run going but don’t use DRS for this run.”

Alonso: “It seems that it works now.”
“It’s good in the data for us too, Fernando.”

“OK Dany sorry for the engine we will solve it for P2.”
Kvyat: “No worries.”

To Raikkonen: “For info, Seb lost a lot of front tyre temperature on his charge lap, so just keep the fronts up.”

Stroll: “Something broke on the pedal box.”
“Go easy on the brakes, I’ll give you feedback.”

“Daniel we are getting notifications that we have been triggering the short-cut line at turn four [Raidillon].”
Ricciardo: “OK.”

McLaren had solved their DRS problems at the beginning of second practice but now Haas were struggling with it.

Grosjean: “OK dude the DRS is staying up.”
“It’s still open right now, yeah?”
Grosjean: “Yep.”
“OK, we’ll have to box to investigate it.”
Grosjean: “I thought I was getting good top speed. It’s not closing. Should I try anything?”
“No I don’t think it’s going to recover.”

To Vandoorne: “No concern with DRS.”

Track limits at Raidillon continued to catch drivers out.

“You’ve been reported as missing the apex at turn four, that’s Radillon. Make sure you don’t cut the kerb too much.”
Vandoorne: “That was on the slow lap anyway.”
“Correct, that was the slow lap.”

Raikkonen: “Can we do something with the hesitation in turn one?”

“Box Danny. Very quick turnaround for the long run. Rain coming on the radar.”
Kvyat: “Also mechanically the car is to the rear.”

The drivers only had a short amount of time for their race simulation runs due to rain.

“OK Max for info that lap was four-tenths quicker than the Mercs.”
Verstappen. “Oops.”

To Ricciardo: “OK Daniel may be some heavy drops now where you are.”

Alonso: “There is too much rain.”
“Understood.”