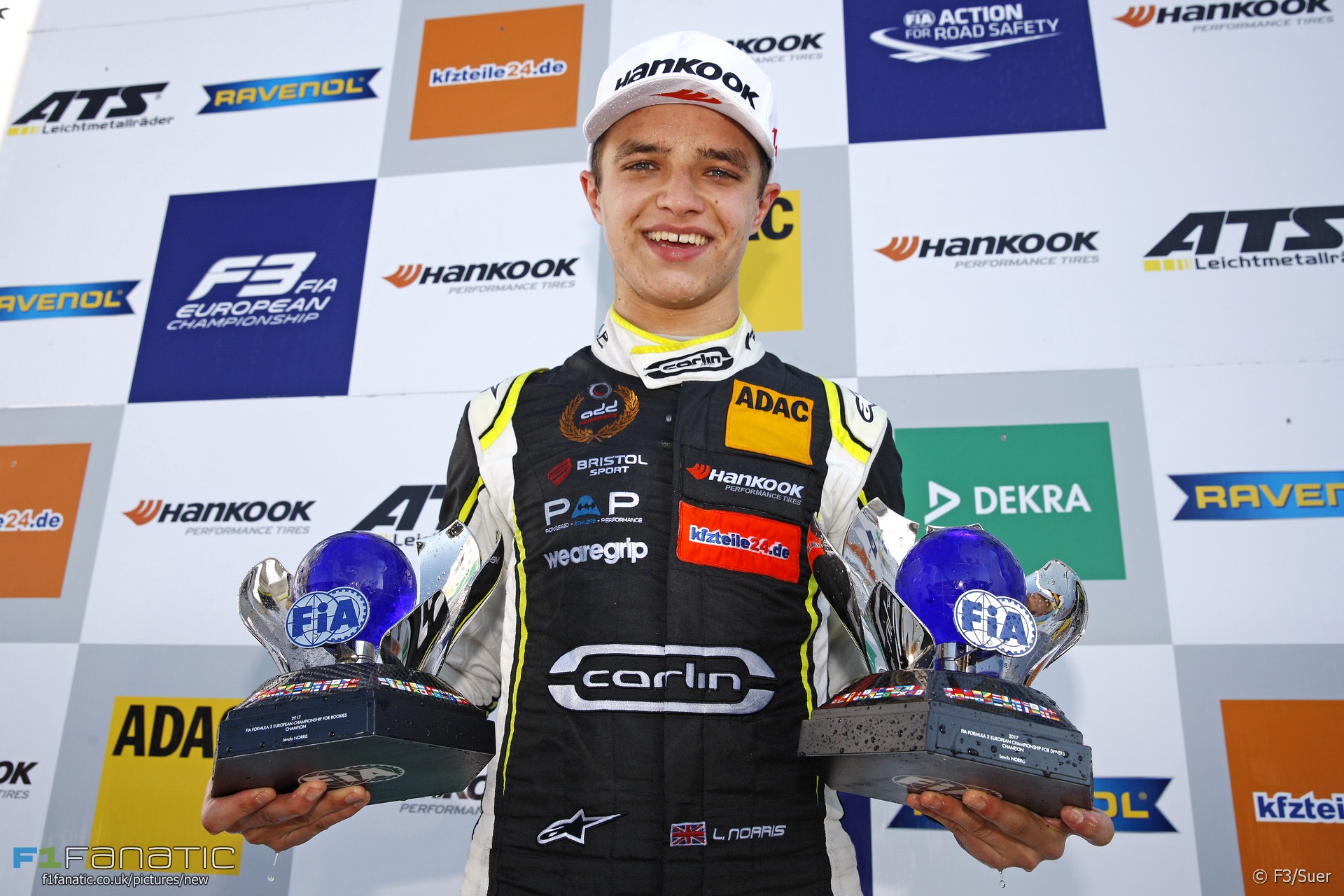 With a McLaren test and reserve driver contract under his belt before his 18th birthday, it’s no wonder Lando Norris is being tipped for big things.

Here’s 12 things you should know about the driver who’s already being tipped as F1’s next Lewis Hamilton.

He’s an F3 champion and his dad’s loaded

Sounds familiar? Yes, the same was also true of F1 rookie Lance Stroll 12 months ago. However Lawrence Stroll is both older (68) and wealthier (estimated net worth £1.8 billion) than Lando Norris’s father Adam (46, £200 million).

So Norris, like Stroll, has wanted for little in his ascent through the junior categories. In karts and racing cars, competing in multiple categories during the same season was routine for Norris until this year. But that high degree of preparation has had the results to match.

By 2010 Norris had won Britain’s Cadet karting category for junior racers. His 2013 season was a stellar campaign, yielding silverware in the CIK-FIA KF Junior championship plus the super cup and Euro series. He missed out on the world junior title, but made amends the following year.

Now in the top KF category, Norris became the youngest driver ever to win the world title, at the age of 14

Hamilton’s old rival is showing him the ropes

In 1998 Lewis Hamilton was beaten to the Champions of the Future karting title by Fraser Sheader, a competitive racer who lacked the backing to progress much further up the motor racing ladder.

Sheader went on to set up a driver talent management company called ADD Motorsports. The company specialises in selecting talent at a young age and Norris joined them soon after graduating from cadets. All aspects of driver training are catered for including fitness, diet, psychology and of course driving skills and technical knowledge.

Norris said he wasn’t into car racing when, aged seven, he had his first trip to a kart track at Clay Pigeon in Dorset. “I was more into Moto GP to be honest,” he admitted in an interview last year.

However he quickly showed an aptitude for karting and progressed through the junior ranks with his brother Oliver, who is three years older than him.

Norris is part of a new generation of drivers who’ve grown up with easy access to race simulators on which they can hone their skills. He’s put this to great use, racking up simulated hours at the wheel of his racing cars on sim games such as iRacing.

He joined simracing team Apex Racing at the end of last year.

He makes a habit of winning first time

The latter is especially impressive not just because it’s the most high-profile championship he’s won so far. Norris continued a productive association with Carlin from MSA Formula and BRDC F3 and together they ended Prema’s domination of the category which included successive title wins for Roberto Merhi, Daniel Juncadella, Raffaele Marciello, Esteban Ocon, Felix Rosenqvist and Stroll.

He has serious racecraft

Here’s Norris battling with Formula Renault Eurocup title rival Max Defourny at the Red Bull Ring last year. Defourny was clearly the quicker of the pair and was able to pass Norris more than once, but every time Norris retaliated and re-passed his rival, performing moves on some of the more unlikely places around the track.

Finally, on the penultimate lap of the race and with two wheels on the grass, Norris produced the pass that clinched the win:

Never a bad thing in a racing driver, along with being rich and extremely fast.

Not content with winning three different championships in one year, at the end of 2016 Norris made the step up into Formula Three. Stroll had already clinched the championship when Norris made a wildcard appearance at the Hockenheimring season finale.

Fortunately for Stroll, Norris and fellow newcomer Dan Ticktum were required to start from the pits. Norris lapped within a tenth of a second of pole position in race three and would have started fourth, one place ahead of the newly-crowned champion.

He lives in Somerset

He excels on ‘driver’s tracks’

On his first visit to Monaco with the Formula Renault Eurocup he put his car on pole position, only to be stripped of it due to a minor technical infringement. Heavy rain meant little green flag running in the race and half-points were awarded when it was cut short.

His first trip to Spa was another clear sign of his potential on a drivers track of an entirely different kind. He turned up in the German Formula Four championship, which he was not racing in full-time and had less experience of the equipment than his rivals, and in three races took a fourth, a second and a win.

But not in Formula One, unless he gets a call-up as a substitute. Before the season begins Norris and Fernando Alonso will team up for the Daytona 24 Hours sports car race in January. Appropriately, Norris used to drive Alonso’s FA kart brand.

Last week Norris tested an LMP2 Ligier in preparation for the race. And before this year’s out he will also take on the prestigious Macau Formula Three Grand Prix (this weekend) and make his Formula Two debut at Yas Marina (the weekend after).

His plans for 2018 are yet to be confirmed, however. Unsurprisingly much speculation surrounds the future of one of the most exciting talents outside of Formula One at the moment. F2 with Prema or ART? F2 with a returning Carlin, who he has a long and successful relationship with? Or follow Stoffel Vandoorne’s footsteps to Japanese Super Formula?

Given his track record, a combination of both wouldn’t be a shock.

53 comments on “Norris facts: 12 things you should know about McLaren’s future F1 driver”