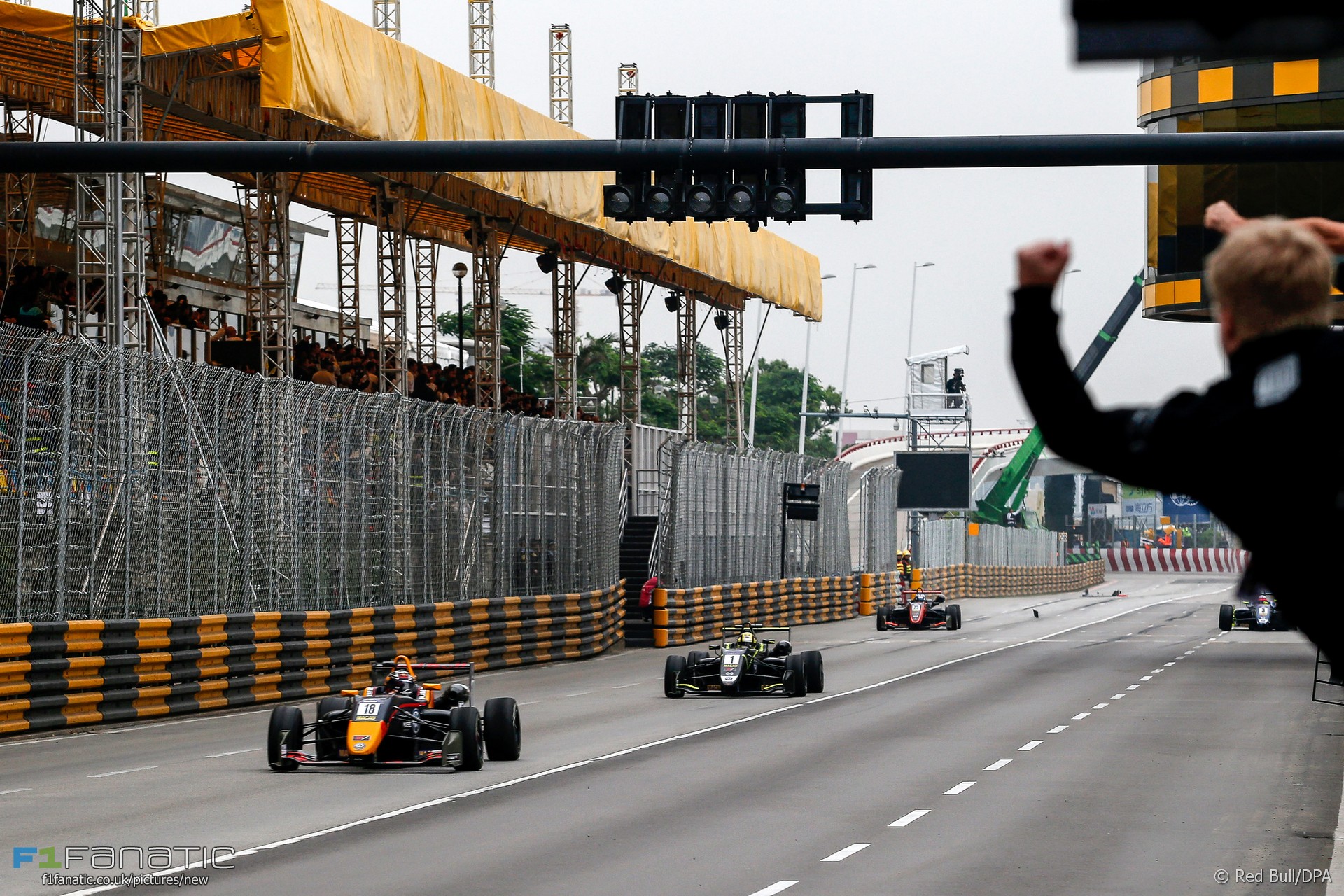 The Macau Grand Prix was held this weekend with three major categories forming the headline acts: WTCC, GT3 and arguably the most important single-seater race outside of Formula One in the Formula Three World Cup.

Elsewhere the World Endurance and Rally Championships – along with NASCAR – ended for the season, with the latter crowning a Champion, while the Formula V8 3.5 Series ended for good in Bahrain.

If McLaren’s Lando Norris is the golden child among young British racers then Red Bull’s Dan Ticktum, who most know for earning a one-year ban in 2015, is the bad boy. The rivalry between the pair began in karting but while Norris is now on the cusp of reaching F1 it was Ticktum won the latest battle between the pair. And with it, a glorious Macau Grand Prix triumph.

Ticktum’s decisive move was for third place, which came as Norris finally put himself in position to overtake a slowly Maximilian Gunther. They went three-wide into Lisboa, Ticktum boldly sweeping around the outside of his two rivals for third.

The final lap began with race leader Sergio Sette Camara fending off a concerted attack from Ferdinand Habsburg. Having repelled the Carlin driver as far as San Francisco, Camara should have been home free. But he was struggling badly with his tyres and Habsburg was striving to pass on parts of the track which are normally single-file. He lined Camara up for a move approaching the final turn and got him – but neither of the pair made the corner. With both cars in the barrier, Ticktum swept by to snatch an sensational win ahead of Norris.

New Ferrari junior Callum Ilott had won the qualifying race after an incredible move on Joel Eriksson to take the lead. Having qualified third Ilott leapfrogged Norris – who made another of his slow F3 starts – before setting about closing the 1.1 second gap Eriksson had opened up at the end of lap one. He first tried an overtake around the outside of Lisboa on lap five but had to wait two more tours to make the decisive move. With a good run on the Swede, Ilott dived down the inside at the flat-out Mandarin bend, with Eriksson leaving just enough room to avoid an accident, allowing Ilott to take the lead and win by eight seconds.

Last year’s GT World Cup race at Macau was won by a driver who ended the race upside down, and the 2017 edition was almost as strange.

A dozen of the 20 starters in the qualification race were eliminated after a huge pileup at Police which was triggered when fourth-placed Daniel Juncadella hit the wall. That blocked the track and caused concertina effect where car after car ploughed into the carnage in front. After a half-hour stoppage, the race was restarted with a hugely depleted field, and Edoardo Mortara emerged victorious for Mercedes ahead of Augusto Farfus for BMW and Rafaelle Marciello in another Mercedes.

Mortara converted his starting advantage to outright victory, his fourth at the track, beating the challenge from Robin Frijns and Maro Engel. Augusto Farfus started from second but was hit by Marciello at Lisboa, putting the Brazilian in the barrier and damaging his car. Marciello inherited second briefly until he retired with a smoking car, while Farfus was instructed to pull into the pits during a yellow flag to fix a boot lid which was obstructing his vision. After re-entering the race, a charging Farfus ended the race in a remarkable fourth with some excellent overtakes.

Porsche failed to depart WEC with a win as the number eight Toyota of Sebastien Buemi, Anthony Davidson and Kazuki Nakajima won in Bahrain. The new champions dropped out of contention early on after collecting a bollard while the two Toyota’s relegated their team mate to third.

Thierry Neuville won the final rally of a thrilling season, but only after new team mate Andreas Mikkelsen was cruelly forced to retire early on day two.

Mikkelsen led comfortably early on after dominating Friday, but he picked up two punctures on stage ten and was only carrying a single spare, ruling him out of contention. This promoted Neuville to a lead he wouldn’t relinquish, as he looks to carry strong form into 2018 in a bid to finally beat Sebastien Ogier to the title.

Jari-Matti Latvala looked set for second place until a small mistake put him out on the final stage, meaning Ott Tanak ended his career with M-Sport in second place as he moves to Toyota in 2018. Hayden Paddon gained a surprise final spot on the podium thanks to Latvala’s demise, a good end to a trying year.

Martin Truex Jnr clinched his first NASCAR Cup title with victory in the final race of the season at Homestead in Miami, chased to the line by Kyle Busch.

Ahead of the season finale Formula V8 3.5 announced the Bahrain weekend would be the last hurrah for the championship. Grid numbers have slumped alarmingly since Renault withdrew its backing after 2015 and just ten cars contested the final race.

At least there was the prospect of a six-way title fight to savour. Unfortunately that was decided within seconds of the start. With Egor Orudzhev a non-starter due to tonsillitis it fell to his SMP/AVF team mate Matevos Isaakyan to take the fight to points leader Pietro Fittipaldi. He got off to a promising start by claiming his first pole position of the year, but a transmission glitch on the line stopped him from getting away. Gallingly, the car ran faultlessly after a few minutes’ attention in the pits.

That meant all Fittipaldi had to do to secure the title ahead of the remaining contenders was hold the second place he took at the start. That was good news for series newcomer Henrique Chaves, who inherited the lead spot on the grid from Isaakyan and led from start to finish as Fittipaldi took the title. Race two was a similar story, this time with Fittipaldi pursuing team mate Rene Binder to the flag, and failing to get ahead even when Lotus gave Fittipaldi the benefit of pitting a lap earlier than the other car.

Video not available yet.

Mehdi Bennani won the opening race from reverse-grid pole after Norbert Michelisz’s brought the race to an early end. Contact with the inside and outside barriers at Police left Esteban Guerrieri unable to avoid piling into team mate Michelisz, triggering a standard macu pile-up and red flag. The result was declared based on the result two laps earlier, so Michelisz kept fifth behind his championship rival Thed Bjork. Tom Coronel was second ahead of Ryo Michigami, Japan’s first visitor to a WTCC podium.

The field followed the Safety Car for the first two sodden laps of Sunday’s main race. Rob Huff finally led the field away from pole position and collected a record-breaking ninth Macau win. Michelisz pushed him hard to begin with before making a mistake which allowed Huff to break the tow. Huff won by 8.1 seconds after 9 laps of racing. Tom Chilton took the final podium position ahead of Guerrieri and Bjork, who enters the final round of the season in Qatar with a 6.5 point lead in the driver’s standings and 60 on offer.

Tragically, motorbike racer Daniel Hegarty was killed in another crash during the Macau Grand Prix weekend. The 31-year-old hit a barrier at Fishermen’s Bend.

Thanks to Robert Mathershaw (@mathers) for contributing to this article.