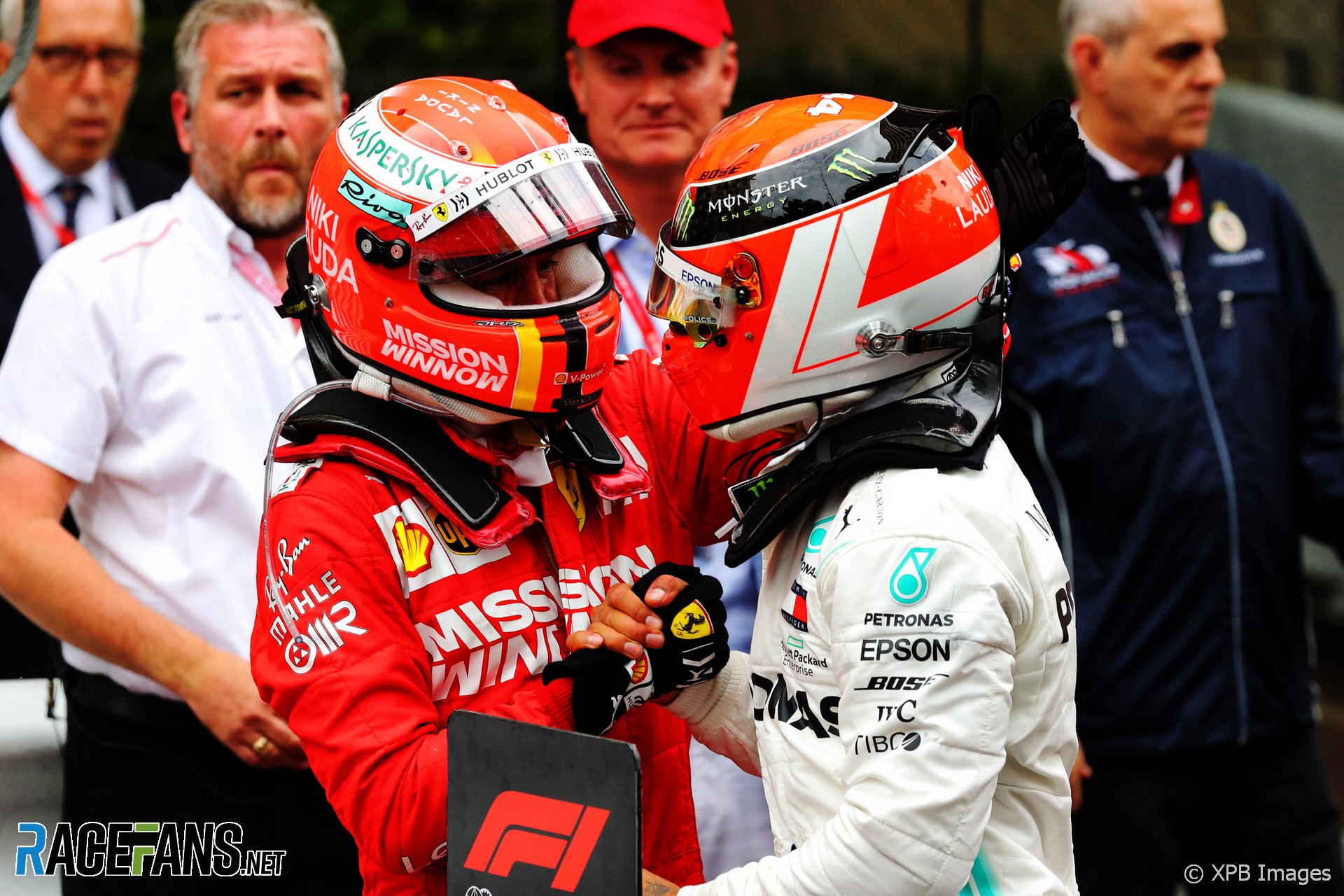 Under the circumstances, there was a pleasing symmetry between Lewis Hamilton’s victory in the Monaco Grand Prix on Sunday and the final victory of Niki Lauda, who passed away six days before the race.

At Zandvoort in 1985, Lauda made an early pit stop and had to eke out his tyres for 50 laps, withstanding pressure from Alain Prost as he did so. Lauda got to the chequered flag two-tenths of a second before his team mate.

Hamilton too made his second set of tyres last a long way in Monaco, and did so under immense pressure. But despite a dramatic lunge from Max Verstappen, which provoked contact between the pair, Hamilton reached the finishing line half a second ahead.

He could have paid no more fitting a farewell to the man who brought him to Mercedes and multiple world championship success six years ago, and whose helmet Hamilton carried to his 77th career win.

Having not been on pole position since the season-opening race in Australia, Hamilton made a timely return to the sharp end at a track where overtaking is a near-impossibility. He once again made a fractionally better start the team mate Valtteri Bottas alongside him, whose second place briefly looked under threat from Max Verstappen.

The Red Bull driver had the inside line approaching Sainte Devote but couldn’t risk running into Hamilton and had to back out of the move. So they climbed the hill in grid order: Hamilton ahead of Bottas, Verstappen, Sebastian Vettel and Pierre Gasly.

The sixth of the ‘big six’, Charles Leclerc, started an out-of-position 15th on the grid after an incomprehensible tactical blunder by Ferrari saw him drop out of qualifying in Q1. His race was a short but spectacular one which had a profound impact on the rest of the grand prix.

He started behind his Ferrari predecessor Kimi Raikkonen, who got away poorly and lost three places. The next time around Leclerc mugged Lando Norris at the Fairmont Hotel hairpin. he then got stuck into Romain Grosjean’s Haas, which had the same Ferrari power unit and was therefore a tougher proposition.

Ahead of them Daniel Ricciardo had taken fifth place at the start but had poor pace and was backing the field up. Leclerc needed to make a move, and he did, lunging down the inside of Grosjean at Rascasse with scant millimetres between the Haas on his left and the barrier on his right. Grosjean yielded ground at the last moment, then muttered in complaint about Leclerc’s “kamikaze” move on the radio.

But Leclerc came unstuck when he tried a similar move on Nico Hulkenberg. He didn’t make it quite as far alongside the Renault, then caught the inside of the Rascasse barrier with his right-rear wheel. As Grosjean re-passed him, he instinctively pressed on, only to discover his right-rear tyre had punctured.

As he approached Tabac the tyre let go completely, tearing off much of the right-hand side of his floor. Leclerc bravely attempted to continue despite Ferrari’s concerns over the state of his floor. The Safety Car was summoned so marshals could clear the track of his debris, which allowed him to get back on the lead lap. But the car’s handling in high-speed corners was frightening, and efforts to tame it by dialling in understeer were in vain. Leclerc pulled into the pits and retirement, continuing his rotten streak of luck in front of his home crowd.

The Safety Car period brought about the circumstances under which Mercedes’ astonishing streak of one-two finishes came to an end. Though the eventual beneficiary, Vettel, did nothing to earn it.

Hamilton and Bottas were running nose-to-tail when the Safety Car came out. But as Mercedes needed to pit both under the Safety Car, Bottas was told to drop back from Hamilton so he wouldn’t have to wait behind him in the pits, losing time to his other rivals.

“Stay positive on delta,” Bottas was told. “We are stacking.” Mercedes told Bottas to build a “very safe delta” and counted him up from being half a second behind Hamilton to three seconds back. Even so, he was told: “More safe, please.” When Bottas arrived in the pits he had a clean entry: Hamilton had already gone.

The rules forbid driving from lapping “unnecessarily slowly” when the Safety Car is deployed. Verstappen, no doubt aware of this, complained: “Why is he driving so slow? Come on, he has to hurry.” Clearly the stewards found Bottas’s driving didn’t meet the definition of “unnecessarily slow”.

However Red Bull turned Verstappen around quickly enough to gain a place from Bottas. He emerged from his box fractionally ahead of the Mercedes, and would have legitimately held onto his position if he hadn’t then squeezed his rival into the pit wall. The contact left both drivers with damage, and the stewards issued a five-second penalty to Verstappen.

Bottas incurred a puncture in the contact, so Mercedes brought him back in. His only remaining suitable set of tyres was the hard compound. This cost him another place to Vettel, who stood to gain another spot from Verstappen if he finished within five seconds of him.

The Red Bull driver suffered another consequence of the collision. In his haste to leave the pits, Verstappen had failed to disengage his ‘start’ throttle map, which now couldn’t be deactivated. While the team made changes to his engine performance to mitigate the problem, it compromised his efforts to attack an unusually vulnerable Mercedes.

Hamilton had a problem. Mercedes had put him on what team principal Toto Wolff later admitted were the “wrong” tyres. They assumed the medium tyre compound would comfortably make it to the end of the race but a series of radio messages from Hamilton revealed his deepening concern with the state of his tyres.

To begin with Verstappen was not well-placed to attack. He was busy switching engine modes and coping with a malfunctioning sensor, which meant other aspects of his performance were begin overlooked. “You are within DRS,” his race engineer reminded him at one point. “What?” asked Verstappen. “You are within DRS distance.”

Verstappen spent almost all of the rest of the race within DRS distance of Hamilton, but it did little good. Not only did he need to pas the Mercedes, but do so early enough to pull out a five-second lead to ensure the win.

“Come on, mate, we’ve got this, we’ve got this,” Verstappen’s engineer urged him as the gap between the two shrunk to less than half a second. But a couple of corners later the Red Bull went deep at the exit of the Swimming Pool and cut across the run-off area.

While Verstappen was clambering over the back of Hamilton’s rear wing at the Fairmont Hotel hairpin, as they accelerated out of Portier the Mercedes consistently put the power down better than Verstappen in his compromised RB15. Nonetheless on the 76th lap Verstappen worked himself up to a lunge at the chicane. It came from an impossible distance, the Red Bull’s front-right touching Hamilton’s right-rear, and was to no avail; the pair cut across the chicane and continued.

With that, Verstappen’s best chance was gone. And with Vettel and Bottas on his tail, his chance of finishing on the podium was over too. Hamilton took the chequered flag half a second ahead of him, but one the five-second time penalty was applied Verstappen was relegated to fourth. Arguably he deserved more, certainly Vettel had taken second place by default, and Bottas had taken a greater hit to his championship chances than was really merited.

Gasly’s three-place penalty (due to Red Bull’s error in qualifying) meant he lost so much ground to the leaders that when the Safety Car came out that it wasn’t worth bringing him in for a pit stop. He had another lonely race and another pit stop for fresh rubber at the end to collect the bonus point for fastest lap.

Carlos Sainz Jnr put an excellent pass on the Toro Rosso drivers at the start to run behind Gasly. But while Daniel Ricciardo and Kevin Magnussen made for the pits under the Safety Car he stayed out, and profited. Aided by his team mate backing up the field, Sainz kept the Toro Rossos at bay for sixth.

Grosjean finished ninth on the road but copped a five-second time penalty for crossing the pit exit line, which relegated him to 10th behind Ricciardo. Magnussen, who raved about his car after qualifying, was bemused to fall to 12th at the flag. That became 14th when he too received a five-second penalty for cutting the chicane while trying to keep Perez behind.

Norris finished ahead of him on the lead lap, with Perez promoted to 12th and Hulkenberg 13th. George Russell impressed with 15th, having been the quickest driver for three consecutive laps while Hamilton was holding the field up after the Safety Car.

Lance Stroll ended a poor weekend in 16th, while the Alfa Romeo pair had a dreadful day. Raikkonen came in 17th, Antonio Giovinazzi last of the runners behind Robert Kubica, the pair having tangled at Rascasse.

A one-two for Lauda instead of Mercedes

Mercedes’ streak of one-twos ended in Monaco but there was no real comfort for their rivals here. This was an emphatic performance by the W10s on the kind of track which hasn’t suited them in recent seasons.

Vettel may have been fortunate to take second but it ensured one final fitting symmetry on the podium. Like Hamilton, he also sported a Lauda tribute helmet for the race, meaning the two-time Monaco winner was doubly represented on the podium.