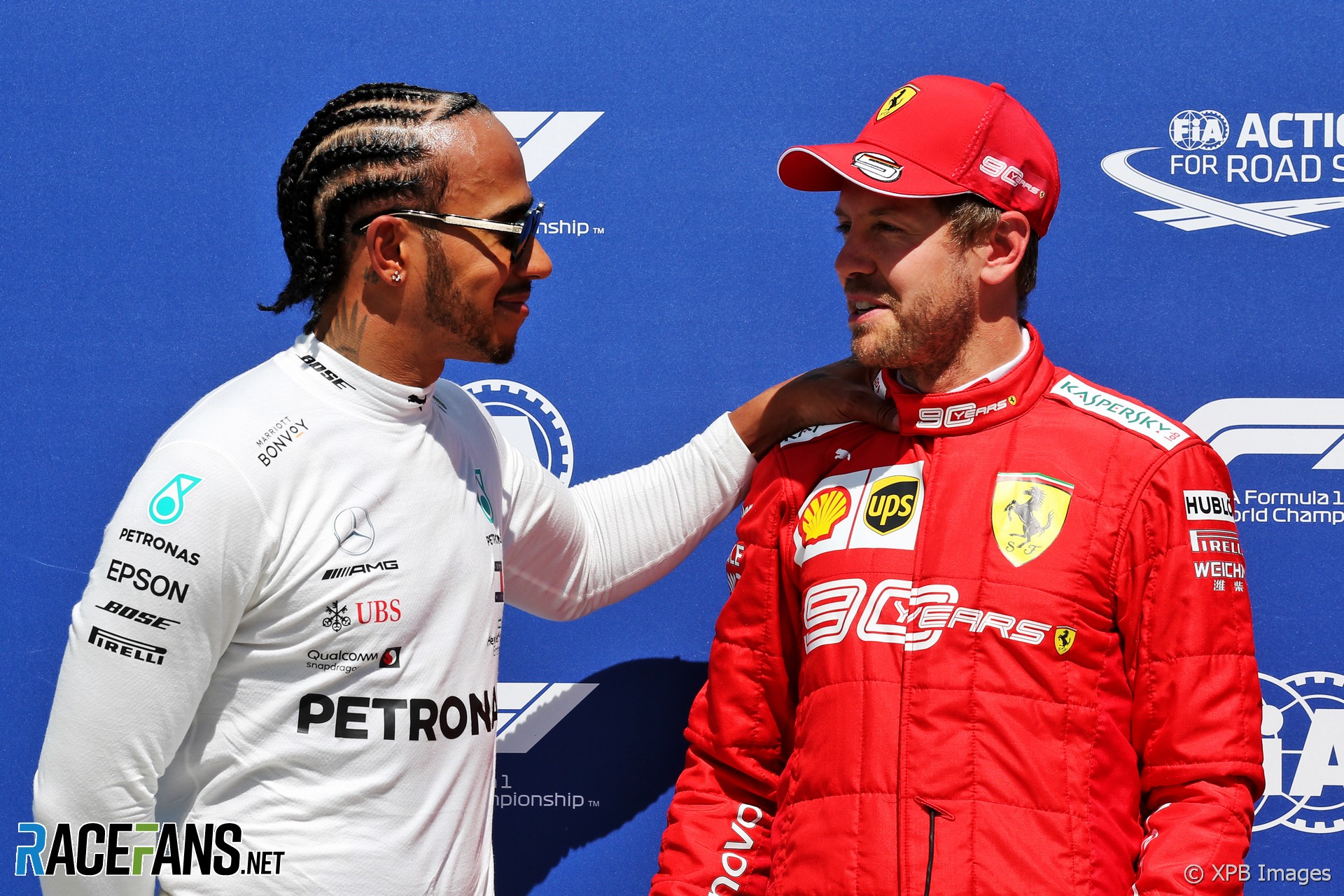 Sebastian Vettel denied Lewis Hamilton a record-breaking seventh pole position for the Canadian Grand Prix with the final lap of the session.

A superb final lap by the Ferrari driver meant Hamilton had to settle for second place.

In a dramatic session Kevin Magnussen crashed heavily and cost Max Verstappen a place in Q3. And a stunning lap by Daniel Ricciardo put his Renault ahead of both Red Bulls and a Mercedes.

The Ferrari and Mercedes drivers put on a tremendous show in their scrap for fastest overall time in the first phase of qualifying. All four drivers took turns at the top of the times, and by the time they had finished their opening run on soft tyres the top three were separated by less than three hundredths of a second: Vettel ahead of Leclerc and Bottas.

Romain Grosjean, who lost time after clipping the wall in final practice, had fallen into the bottom five before his final run but found enough time to claim a place inside the top 10. Alexander Albon followed his move to go safe.

That put Lance Stroll at risk. The Racing Point driver had been forced to switch to the older Mercedes power unit after suffering a failure in the final hour of practice. He came out of the final corner in an elegant drift but took a Q2 spot only temporarily before being relegated by four of his rivals.

It was a double blow for Racing Point as Sergio Perez’s final run left him seven-hundredths of a second shy of a place in Q2. The last spot went to Antonio Giovinazzi, whose final lap also pushed team mate Kimi Raikkonen into the drop zone. The Racing Point pair and Raikkonen were joined, as usual, by the two Williams drivers.

With the soft tyres degrading quickly, the tactical advantage of starting on the medium compound was clear. Ferrari were able to set sufficiently competitive times to reach Q3 on the medium rubber with little difficulty. Mercedes managed it too, but unlike Ferrari they had to do two runs of the mediums to get it done.

For Red Bull the decision was trickier. Pierre Gasly, who hadn’t been on Verstappen’s pace for much of the weekend, opted for softs. But Verstappen gave the medium tyres a shot.

His first runs were compromised by traffic, which left him 11th. With the clock ticking down, the team decided it was no longer worth the risk, and switched him to the soft tyres. But luck was against them.

Exiting the final corner on his last run, Kevin Magnussen glanced the ‘Wall of Champions’ and spun hard into the pit wall, smashing the right-hand side of his Haas. That brought out the red flags and, with insufficient time left to restart the session, spelled the end for Verstappen’s hopes of reaching Q3.

Magnussen’s crash meant he did secure a place in Q3 but prevented his team mate, running close behind him, from completing a flying lap in the session, and ensured Grosjean’s elimination. The two Toro Rossos dropped out too, and were joined by Giovinazzi.

Hamilton seemed on course to deny Ferrari pole position after a superb first run put him on top of the times. But an error by Bottas kept him from matching his team mate – he spun at the exit of turn two, wrecking his first run.

Hamilton chipped away at his lap time with his final effort and managed a small improvement, lowering the benchmark to a 1’10.446. But Vettel had more in hand, and the Ferrari’s superior straight-line speed helped him beat Hamilton by two-tenths of a second at the line.

Hamilton and Vettel out-classed their team mates in the final runs. Leclerc was over two-thirds of a second off Vettel, while Bottas continued a mystifying Q3 performance with sixth-fastest time. He was beaten by Gasly’s Red Bull and an inspired lap by Daniel Ricciardo, who put his Renault an excellent fourth.

Nico Hulkenberg took seventh in the other Renault ahead of the McLaren pair and Magnussen.