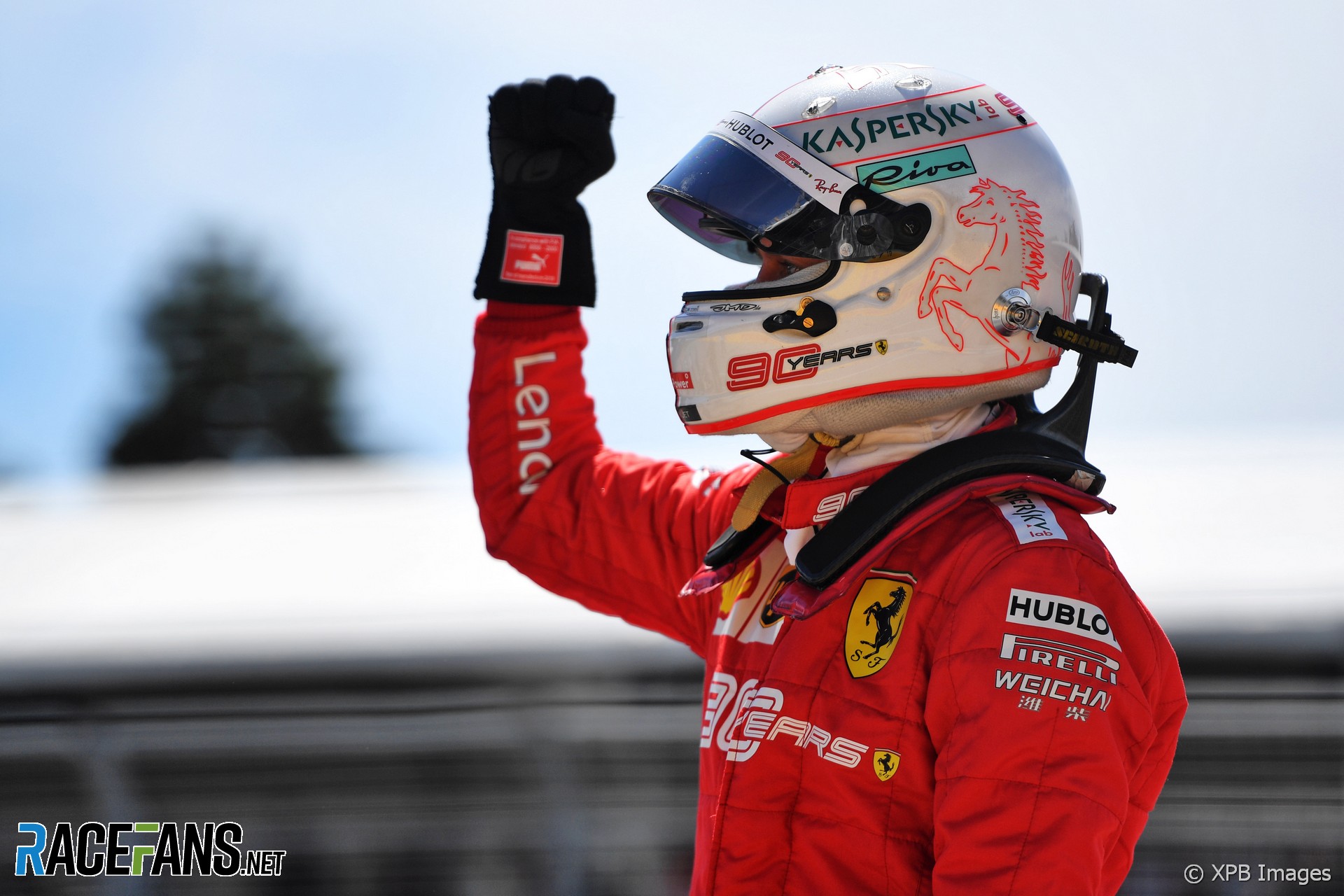 Sebastian Vettel’s relief at scoring his first pole position for 17 races was clear to see.

The Ferrari driver erupted with joy when he was told he had beaten Lewis Hamilton with his final lap of qualifying. However with the championship leader starting alongside him, Vettel is well aware the job is not yet half-done.

Vettel has had a tough time in the races since his previous pole position at last year’s German Grand Prix. He crashed out of that race while leading in front of his home crowd. Further errors at Monza, Suzuka and Austin wrecked his championship hopes. And 2019 has not started according to plan, with team mate Charles Leclerc showing him the way more often than a sophomore driver should, and Vettel compounding the situation with another costly error in Bahrain.

For Vettel to reassert his credentials as a championship contender, nothing less than a victory will do. He needs to see off Hamilton and, ideally, get Leclerc in between him and the Mercedes as well. But that’s far easier written than done, even with the considerable advantage of pole position.

“It will be a very, very close battle,” Vettel predicted. “We know our strengths, we know our weaknesses.”

Ferrari’s biggest strength – perhaps its only major one – is its straight-line speed. Aided by Leclerc’s slipstream, Vettel was 2kph faster through the speed trap than anyone on Saturday.

“Obviously we are very quick down the straights, let’s assume not so easy to pass but we will see,” he said. “We know that in terms of pace it will be very, very close and we need a perfect race tomorrow to fight for the win.”

Providing the Ferrari driver gets off the line reasonably well, he can also count on the short run to turn one helping him keep ahead of Hamilton. The Mercedes driver will no doubt be acutely aware of the risk of getting ‘hung out’ on the outside of turn one, which Vettel could use to help Leclerc get ahead.

Hamilton’s biggest threat to Vettel is likely to come from the Mercedes’ long-run performance. Valtteri Bottas demonstrated its potential on Friday. Hamilton, of course, was unable to do the same after damaging his car, which could put him at a slight disadvantage.

All the indications are Sunday will be a very warm day – air temperatures hitting 28C and track temperature potentially hitting 50C. The Mercedes and Ferrari drivers all qualified on the medium tyres, so they won’t be making the same early bid for the pits those starting on the softs (led by Daniel Ricciardo and Pierre Gasly) will have to.

Ferrari have seldom looked like a threat to Mercedes in race conditions so far this year. The exception was Bahrain, where they were able to hit the front, run in clean air and manage their tyres as they saw fit. A key aspect of Sunday’s race will be how much better Vettel can manage his tyres if, as expected, he leads the early stages.

Mercedes, however, will surely snatch a chance to change Hamilton’s tyres early and force Ferrari to follow them, hoping that by doing so their rivals will have to push their tyres too far.

“Whatever opportunity comes we will try to capitalise on,” said Hamilton. “[It’s] probably a one stop so looking after the tyres is going to be really key.”

The long straights of Montreal mean it is often thought of as a track where overtaking is easy. However that doesn’t always prove to be the case. “It’s very hard to follow here,” Hamilton acknowledged, “even though there’s mainly straights, they are very quick on the straights. So I don’t know how following Seb is going to be tomorrow if I’m in that position, but I just hope that we are able to be close and have a real race throughout the race.”

Will Vettel end Mercedes’ streak of victories in today’s race? Could Ricciardo hold off the Red Bulls or even Bottas after qualifying fourth?

Share your views on the Canadian Grand Prix in the comments.