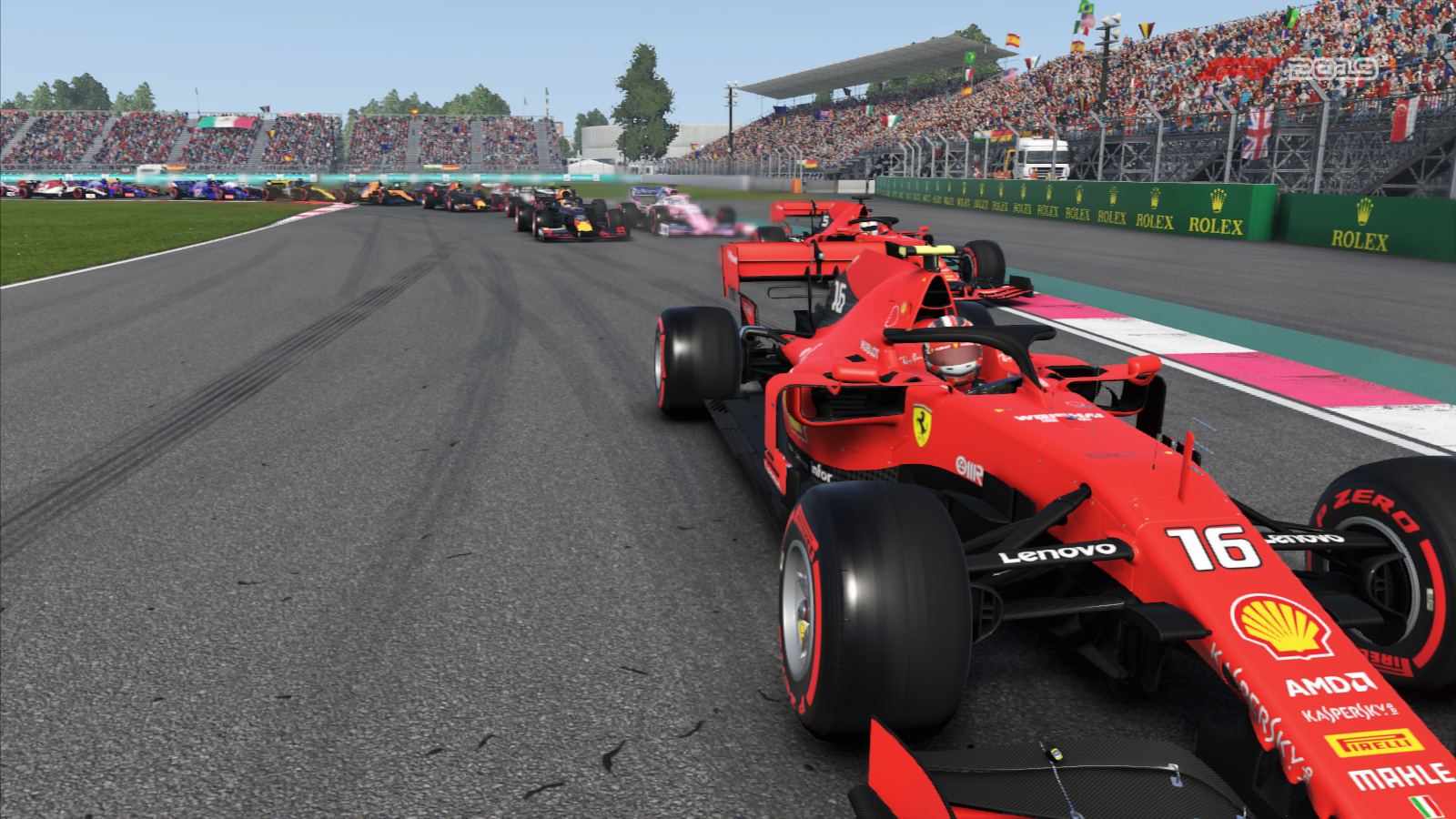 With F1 2019, the latest instalment of the official Formula 1 game, Codemasters have expanded the championship to include the Formula 2 support championship for the first time.

It comes in addition to all the F1 2019 drivers and teams as you’d expect, plus a new ‘Legends’ mode. This allows you to races as F1 greats Ayrton Senna or Alain Prost in a series of challenges.

We’re now able to give you our impressions of the finished game for the first time. Our complete review will follow once we’ve had a chance to fully explore everything that’s going on inside the tenth instalment of Codemaster’s official F1 game for major platforms.

Before delving into what’s new for this year’s edition, it feels apt to say how refreshing it is to be discussing the release of an officially licensed F1 game in the month of June. Thanks to a longer development cycle, F1 2019 has easily the earliest release window of any of Codemasters’ major F1 titles – something that hopefully signals a new trend for the series.

Every installment of a yearly sports game needs one blockbuster new feature to justify the annual purchase. Following the triumphant return of classic cars to the series in 2017, this season sees fans finally get their hands on one of their most heavily requested features; Formula 2.

F1’s feeder series has been given the full Codemasters’ treatment in F1 2019, with all teams and drivers from the 2018 season included from launch and the promise of the 2019 season to follow as a free expansion in due course.

Not only can you engage in a full, authentic F2 season offline, you also have free range to race the Dallara chassis around all of F1 2019’s 21 circuits and four shortened variants. Ever wondered how Formula 2 would look around the Circuit Gilles Villeneuve or Austin? Now’s you can find out.

It’s great to say that, on track, virtual Formula 2 races are just as frenetic and competitive as the real thing. As a spec series, F2 races are much less prone to the field spread we see in its senior counterpart, meaning you almost always have a rival nearby to scrap with.

As you’d expect, the F2 cars feel noticeably different to drive compared to the premier category machines. They’re less powerful, not as nimble with longer braking distances meaning that while still fun, they’re less satisfying to drive than the F1 beasts. Which only makes you appreciate the raw performance of the Formula 1 models all the more.

Formula 2 also serves as the entry point for this year’s career mode, which does take on a new flavour this season even if it operates fundamentally similar to 2018.

When starting your career, you have the option to begin in Formula 2, or jump straight into Formula 1 and choose your team at your leisure. Rather than undertaking a full feeder series campaign, the F2 integration acts as a prologue of sorts for your career, as well as setting the scene for the brand new story element for this season.

Three short scenario challenges not only serve as highlights of your driver’s tumultuous season in Formula 2, they also introduce the two original characters who will also be making their virtual F1 debuts in your career mode – Lukas Weber and Devon Butler.

The inclusion of entirely original characters in career mode who actively replace real life drivers is certainly novel. The story progresses though short cut-scenes reminiscent of Codemasters’s classic Race Driver series. It feels like Codemasters’s attempt to emulate the narrative-heavy modes already introduced in other marquee sports games such as FIFA, Madden NFL and NBA 2K.

As your F2 teammate, Lukas Weber is respectful, sporting and likeable. As long as you don’t channel Santino Ferrucci, he has your back in the paddock and expects the same in return.

Devon Butler, on the other hand, becomes your main rival following a controversial collision at the Red Bull Ring during the Formula 2 prologue. Butler is the classic sports movie villain. He’s arrogant, obnoxious and utterly convinced that he is destined for a glittering career that will leave the motorsport world in awe of his talent.

With the pair of them joining you in promotion to Formula 1, Butler and Weber will play a key role in your story of your own career as you bid to beat them both to the ultimate prize of becoming world champion.

While Codemasters deserve credit for adding a new and interesting twist to their meatiest single player mode, it is all very predictable and cliche – at least to begin with. At time of writing, we haven’t seen all of the story elements play out, so there’s still time for plot twists to subvert our expectations. What will be divisive, however, is that the inclusion of these two original characters in career mode is mandatory unless you skip F2 and go straight into F1.

Disappointingly, there is also no longer the option to select which driver you replace in the career mode. Anyone hoping to try and bring Williams back to prominence alongside Robert Kubica will be left with a bad taste in their mouth.

Among the other elements of F1 2019 we’ll cover in our full review are the major new additions to online play, graphical improvements, a replay saving system and that Senna-vs-Prost mode. Look out for our full, in-depth verdict next week on Codemasters’s most ambitious title yet.

11 comments on “Codemasters F1 2019: First impressions of the finished game”