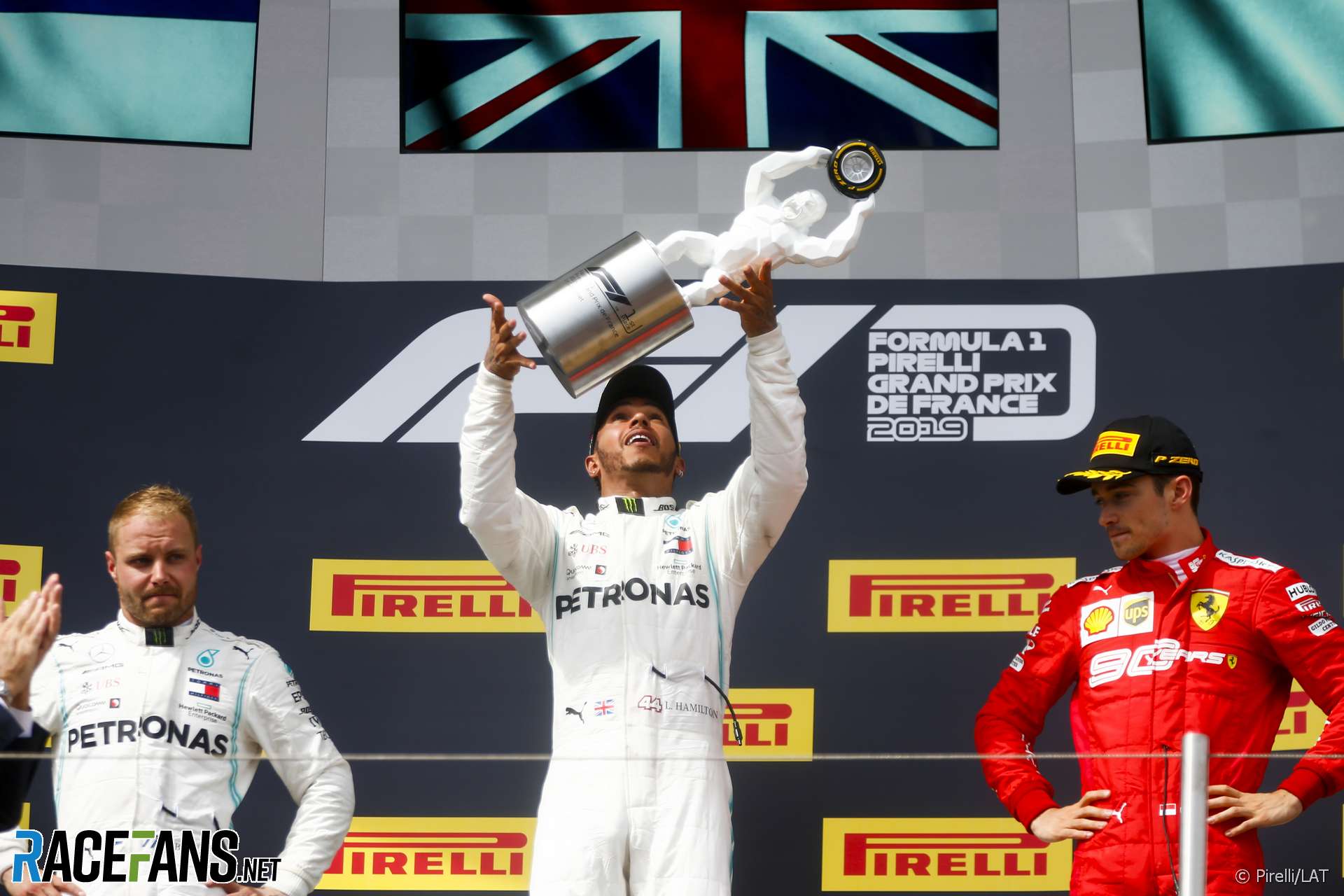 The French Grand Prix felt as if it had been precision-engineered to engender despair about the state of Formula 1 competition in 2019.

Lewis Hamilton and Mercedes annihilated the opposition. That may seem an exaggeration; one Ferrari finished on Valtteri Bottas’s tail and the other Ferrari set the fastest lap of the race. But Hamilton had 18 seconds in hand over his rivals and admitted afterwards he had a lot of pace in hand.

Earlier in the season Hamilton’s team mate Bottas looked like the only remaining threat to his title hopes. But the fourth consecutive win for car number 44 showed those prospects are diminishing rapidly as well.

It wasn’t just the contest at the front that was non-existent. Throughout the field, little happened before the final lap which might reasonably be described as “racing”.

For anyone who found the eighth round of 2019 a dispiriting and one-sided affair, Hamilton had a clear message afterwards: The blame lies with those running the sport. And, having taken a look at their plans for 2021, he doesn’t expect things to improve any time soon.

Mercedes swept the front row of the grid in qualifying. Charles Leclerc put a tidy lap together and was six-tenths down in third; Sebastian Vettel has mystified by his car’s handling in Q3 and ended up almost one-and-a-half seconds down in seventh, separated from his team mate by Max Verstappen and the resurgent McLarens.

The light had gone out quickly all weekend in the F2 and F3 races, and the grand prix was much the same. “I was quite surprised how quick the lights went off,” said Leclerc. “I didn’t have a great start.”

However the Ferrari’s strong engine plus the tow from the two draggy Mercedes kept him safe the cars behind. “I tried to place myself round the outside of Valtteri for the first corner but I didn’t take the risk to go round the outside, because he would have out-braked me and pushed me wide, for sure. I would have done the same.

While the top four held their order Carlos Sainz Jnr out-dragged Lando Norris for fifth place. Vettel was beaten to turn one by Daniel Ricciardo, but the Renault driver was held up behind the cautiously-braking Norris at turn one, allowing Vettel to reclaim his place.

While Hamilton edged clear at the front, Vettel drew within DRS range of the McLarens and easily zapped past the pair of them. In a parallel universe, where no one has taken the lamentable decisions to create DRS or interrupt Paul Ricard’s Mistral straight with a chicane, Vettel would have been made to work for these positions, drawing alongside his rivals as they scorched into Signes at over 300kph. Instead the moves were predictable and routine, worthy of note in this race report only because so little else of note happened at Paul Ricard on Sunday.

At the other end of the field, George Russell performed such a pass on his team mate. It took two goes: On the first Robert Kubica leant hard on the other Williams, obliging his team mate to run wide where he clipped a polystyrene corner marker and damaged his front wing. The next time Russell got a little further alongside and captured the position in a superb move; regrettable, one the television director somehow contrived to miss.

Almost all the drivers who qualified inside the top 10 did so using the harder medium compound tyres. Pierre Gasly and Antonio Giovinazzi used the soft tyres to reach Q3, but these had a short life, especially in the case of the Alfa Romero driver. While Gasly had under-performed in qualifying compared to Verstappen – again – Giovinazzi was hard done by under rules which too often punish midfielders.

The medium tyre compound allowed the front runners to extend their opening stints, and as the gaps opened up between them it became clear none would be in a position to ‘jump’ the other. Vettel might have been the exception, as he stayed out hoping to gain an advantage over Verstappen, by a locked tyre sent him into the pits soon too.

Over the second stint Hamilton briefly report a problem with his tyres. “I asked if anyone else was having blistering and they didn’t reply that Valtteri or anyone else was having the same, so I was a little bit nervous with that,” he said. “Particularly as it started getting quite deep on the right side, and then it appeared on the left side.

“I’m thinking: ‘Shoot’. I remember last year Lance [Stroll], I think it was, in the Williams had the tyre blow up in turn 10, so I was a little bit nervous for that. Even though I think we had the thin gauge tyre last year as well.

“I was a little bit nervous with that. I basically reduced a bit of my speed for a period of time where I wasn’t really leaning too heavily on the front tyre.”

The problem turned out to be nothing serious, and Hamilton had enough life left in his tyres to make a decent stab at the bonus point for fastest lap. However as usual the gap between the midfield and the front runners handed an opportunity for another driver to make a ‘free’ pit stop for fresh tyres.

“We knew Vettel had a free stop,” said Hamilton. “[But] the thing is, with me, my mentality is that it doesn’t matter whether they have a free stop, I’m still going to go for it.

“The team [said] don’t even bother. And so, anyway, I came out of the last corner and half way down the straight I decided to go for it. So I probably lost a little bit in power mode but, other than that, it was a really good lap.”

It was only two-hundredths of a second away from beating Vettel to the fastest lap time. If Hamilton had turned the wick up sooner, he could have capped a day of crushing superiority with a final, morale-crushing blow to Ferrari.

Drama at the end

Only in the final laps did the race threaten to come good. First Norris, who had stalked Sainz all race, hit trouble in his McLaren. The team warned him to stop using his DRS, then that his steering would become heavy – telltale indications that he had a hydraulic problem.

Norris began to lose a few tenths of a second per lap to his team mate. Ricciardo drew back within range behind him, closing the gap to less than two seconds.

Then Alexander Albon, running on hard tyres and under press from medium-shod team mate Daniil Kvyat, clipped a bollard at turn one while Kvyat was setting him up for a pass. It landed in the corner and prompted a Virtual Safety Car period for it to be recovered.

When the VSC period ended, Ricciardo was immediately on Norris’s tail. On the final lap he made an all-or-nothing bid to claim the place but braked fractionally too late into the chicane and went onto the run-off. He steered back onto the circuit directly in Norris’s path – perhaps hoping everyone had forgotten the penalty Vettel had received for doing exactly the same thing in Canada – and then went off the track again as he tried to prevent Kimi Raikkonen taking advantage of his delay.

Both were clear infractions. They were, however, fairly predictable consequences of racing on a circuit where the run-off areas are as generous as they are at Paul Ricard. That said Ricciardo, like Sergio Perez on lap one, would have done well to remember the basic precept that drivers aren’t allowed to gain positions by putting all four wheels off the track.

While all this was going on the scrap for second place had suddenly come to life. The brief nature of the VSC period caught Bottas by surprise, and that plus an engine misfire helped bring Leclerc within range.

“I lost a little bit of time in the VSC but I don’t think I was the only one because it was super quick,” he said, explaining that he had been busy juggling engine settings when the VSC period ended.

“First you slow down a lot to be positive on the delta, you’re changing the engine modes, then suddenly it was saying ‘VSC ending’. So, I put in the right mode, started to go flat-out because I was a lot positive, I think I got down to maybe plus three [seconds] on the delta which is bigger than usual. So I lost a bit of time there.”

He also had trouble getting his tyres warmed up. “The main issue was the blistering, a lot of front tyre wear. Once you lost a bit of temperature under the VSC, you struggle to get gain it back when you don’t have the surface of the rubber any more there. So, that was the bigger difference, so couldn’t really restart the tyres.”

Leclerc got close enough to pop open his DRS on the back straight and take a couple of speculative looks into the chicane. The sharp right-hander Pont at the end of the lap has often been a place for dramatic lunges, and the thought clearly occured to Leclerc, but he was still too far back to make it work. It at least injected some action into an otherwise lifeless race.

Ricciardo’s penalties eventually dropped him out of the points, so behind Hamilton, Bottas, Leclerc, Verstappen and Vettel came Sainz, Raikkonen, Nico Hulkenberg’s Renault and Norris. Gasly, who had a shocker of a race, was promoted to the final point ahead of Ricciardo.

Before the race weekend Hamilton and Hulkenberg had attended the FIA summit on the new regulations for 2021. He came away with the clear impression the much-vaunted plans for the season after next will do little to close up the competition and improve the racing.

In the post-race press conference Hamilton laid into F1’s rule-makers for what he said were years of poor decisions which have created dull races, of which his emphatic win on Sunday was the latest example.

“Don’t point the fingers at the drivers because we don’t write the rules,” he exhorted. “You should put the pressure on the people at the head who should be doing their job. I think they are trying to but for many, many years they have made bad decisions.”

When you look at Paul Ricard’s car park-size run-offs, the predictability of DRS passes, the tedium of mandatory pit stops and the unfairness of the Q2 tyre rule, it’s hard not to agree with him. But the state of competition is arguably as poor now as it was 15 years ago when the sport was very different. For that you have to ask where Mercedes competition are.

“I really do hope that we have more close races like the last race,” Hamilton added. “I really hope Ferrari bring some extra downforce rather than keeping the straights fast, get some speed through the corners so we can start racing each other.”

There won’t be many people who disagree with that either.