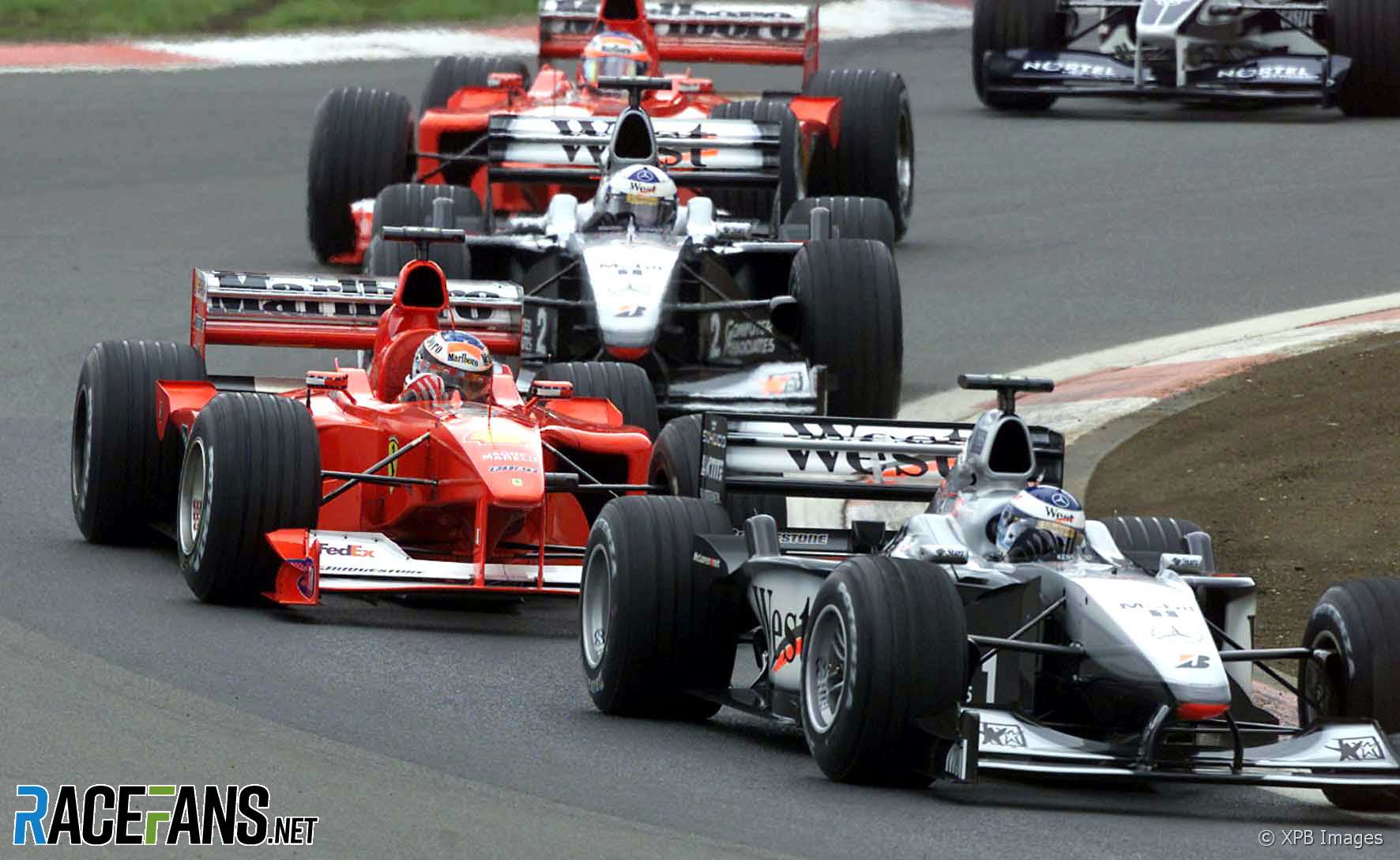 Unlike the most recent European Grand Prix, 20 years ago the race was actually held in continental Europe. The 2000 edition was held, for the fifth time, at the Nurburgring, previously also the home of the German and Luxembourg Grands Prix.

Having first flirted with the ‘new Nurburgring’ in the mid-eighties, F1 rediscovered the venue in 1995, where soggy conditions produced a classic race. The most recent encounter at the track, eight months earlier, had been more exciting still.

The circuit, originally dismissed as bland when compared to the monstrous Nordschleife adjacent to it, had increasingly found favour with the drivers. What seemed overly sanitised a decade before was now appreciated for the undulations and sweeping turns contrasting with a new generation of ‘Tilkedrome’ additions to the calendar.

Michael Schumacher arrived at his first of two home races ahead in the points but increasingly feeling the pressure from the McLaren duo. Mika Hakkinen and David Coulthard had bounced back from their early reliability woes with the MP4/15 and taken wins in Britain and Spain.

These being the days of unlimited in-season testing, in the weeks following the Spanish Grand Prix most teams had headed south-west to Jerez. An exception was the Prost team, which pounded around Magny-Cours trying to find some pace for the recalcitrant AP03.

Despite new aerodynamic components, Nick Heidfeld was unable to hustle the car ahead of the benchmark time set by a rusty 2CV. The team’s future looked uncertain too, as engine supplier Peugeot confirmed it would leave F1 at the end of the season, and Mercedes ruled out supplying their standard-setting V10 engine to anyone besides McLaren.

Arriving at the venue it was clear one of the main talking points for the weekend would be the weather, which is always changeable at the ‘ring regardless of season. Sure enough, rain swept through on both days of practice, culminating in a mixed weather qualifying session.

Having scored his first win the last time out and edged past his team mate into second place, the reigning world champion had some blunt words for the other McLaren driver ahead of the weekend. “David is at the limit with his speed, and with that he is behind me,” said Hakkinen. “End of discussion. Even if he wins a few races he would become a better, not quicker driver.”

Coulthard therefore took some satisfaction from qualifying, where he took pole position for the first time in almost two years. The rain arrived halfway through the qualifying hour, deciding the grid with 25 minutes left to run.

Pole position, however, had become something of an albatross in recent rounds. No one had converted pole position into victory for the past 11 races.

Coulthard shared the front row with Schumacher’s Ferrari, the latter having once again struck trouble on what promised to be his best lap, slithering wide at the Ford Kurve. Row two followed the same formation with Hakkinen clear of Barrichello (set back from mistakes on his first two timed laps).

German interest was therefore well represented at home with Schumacher on the front row separating two Mercedes-powered McLarens. Row three was headed by the younger Schumacher in his BMW-powered Williams, continuing their strong run of form. Jarno Trulli, putting in a strong performance given he was nursing a perforated ear drum, claimed sixth for Jordan.

The Arrows pair had gone well in practice but Pedro de la Rosa could only manage 12th, two places ahead of team mate Jos Verstappen, who infuriated Heinz-Harald Frentzen by blocking the Jordan driver. Ricardo Zonta and Mika Salo shared row 10 having narrowly failed to cross the line before the end of the session to begin their final qualifying efforts.

More drama came post-qualifying where Heidfeld’s Prost was found to be 2kg underweight (a surprise to many given the car appeared to have the power-to-weight ratio of a tugboat). Prost didn’t mince his words, saying Heidfeld’s race engineer Gilles Alegeot had made an “unforgivable mistake” in failing to account for weight-saving changes elsewhere on the car by adding extra ballast.

Under the tougher rules of the time, Heidfeld was thrown out of the weekend, meaning he was not allowed to start what would have been his first home race. Prost did not appeal the decision.

The weather forecast for race day was also mixed with rain expected to fall during the race, potentially turning strategy into a lottery. Nonetheless the cars lined up in front of packed grandstands within which a few brave souls were not sporting Schumacher Dekra caps.

Slicks having been outlawed as a speed-limiting measure two years earlier, the field lined up on dry-weather grooved tyres, but many were eyeing the skies for the widely expected rain. Pole sitter Coulthard, however, favoured a dry weather set-up on his McLaren.

Hakkinen made a lightening start from row two, scything between the front row to take the lead into the Castrol chicane, a more flowing right-left sequence than the extremely tight hairpin which replaced it two years later. Schumacher also got the better of Coulthard and started lap two just half a second behind Hakkinen. Barrichello was fourth ahead of Villeneuve, the BAR driver having made another of his trademark strong starts, and Ralf Schumacher.

Trulli’s race ended early as he tangled with Fisichella on the run to the first corner. The other Jordan dropped out two laps later, smoke pouring forth from Frentzen’s Mugen-Honda following a piston failure.

Williams were planning to make just one pit stop for Ralf Schumacher, and he was struggling to make headway in his heavy car. Fisichella, showing no ill effects from his collision with Trulli, passed him, and the fast starting de la Rosa did the same a few laps later.

Meanwhile the elder Schumacher was doing all he could to dent Hakkinen’s advantage, applying serious pressure to the McLaren and setting the fastest lap on the eighth tour. Coulthard was similarly being harried by Barrichello.

Then the rain started to fall. It took a couple of laps for the track to become slippery, but Schumacher took swift advantage, slipstreaming past Hakkinen into the Veedol chicane to take the lead.

Now in clear air, Schumacher romped clear of the McLaren and was soon five seconds clear. Barrichello was another beneficiary of the slippery track, getting a better exit from the final turn to pass Coulthard for third along the start/finish straight.

As the rain intensified the first pit stops began, the race leaders holding out to hit the optimal window to switch from slicks. Both Schumacher and Hakkinen had troubled stops, a fuel flow problem costing Ferrari at least three seconds, while Hakkinen lost almost 10 seconds when his right-rear wheel stuck. All this meant that Schumacher joined just ahead of Coulthard, leading to some aggressive blocking manoeuvres as the Ferrari driver protected his advantage.

Barrichello was the big loser from the opening stops, staying out a touch too long and having to fight his way through traffic. He criticised the team’s strategy after the race, feeling it cost him a podium.

Despite the intensifying rain and debris scattered across the track, the Safety Car remained in the pit lane. Schumacher made his final pit stop comparatively early, 10 laps before Hakkinen, handing McLaren an opportunity.

Hakkinen used his lightly-fuelled McLaren to carve multiple seconds per lap out of Schumacher’s advantage. But just as he was nearing the half-minute lead he needed, Hakkinen began to approach traffic. McLaren left him out, and around five precious seconds were lost. Once Hakkinen pitted, Schumacher’s lead was well over 12 seconds.

Nonetheless Hakkinen pressed on and began cutting Schumacher’s lead once more. But again, late in the race, he hit traffic, and had to settle for second place.

Further action came outside the points as Wurz, Button and Herbert did battle. Once more it ended in contact, putting Wurz and Herbert out. Button was briefly elevated to seventh before electrical failure (a consequence of earlier contact with Herbert) put him out of the running a few laps from home.

The final phase of the race was run in conditions that today would result in a prolonged Safety Car period. Schumacher came home just over 13 seconds clear of Hakkinen, the only other driver on the lead lap.

Coulthard finished third ahead of Barrichello, with Fisichella and de la Rosa scoring Arrows’ first point of the campaign. Only nine of the 21 starters made it to the flag.

European Commission president Romano Prodi and German Chancellor Gerhard Schroeder handed Schumacher his race-winning trophy in front of a joyful home crowd. His mastery of the wet conditions at put a check on McLaren’s recent upswing in form, and meant he had now won four of the first six races.

However with both McLarens completing the podium, Hakkinen and Coulthard were still very much in touch. It was even tighter in the constructors’ points, with Ferrari just 10 points clear of McLaren.