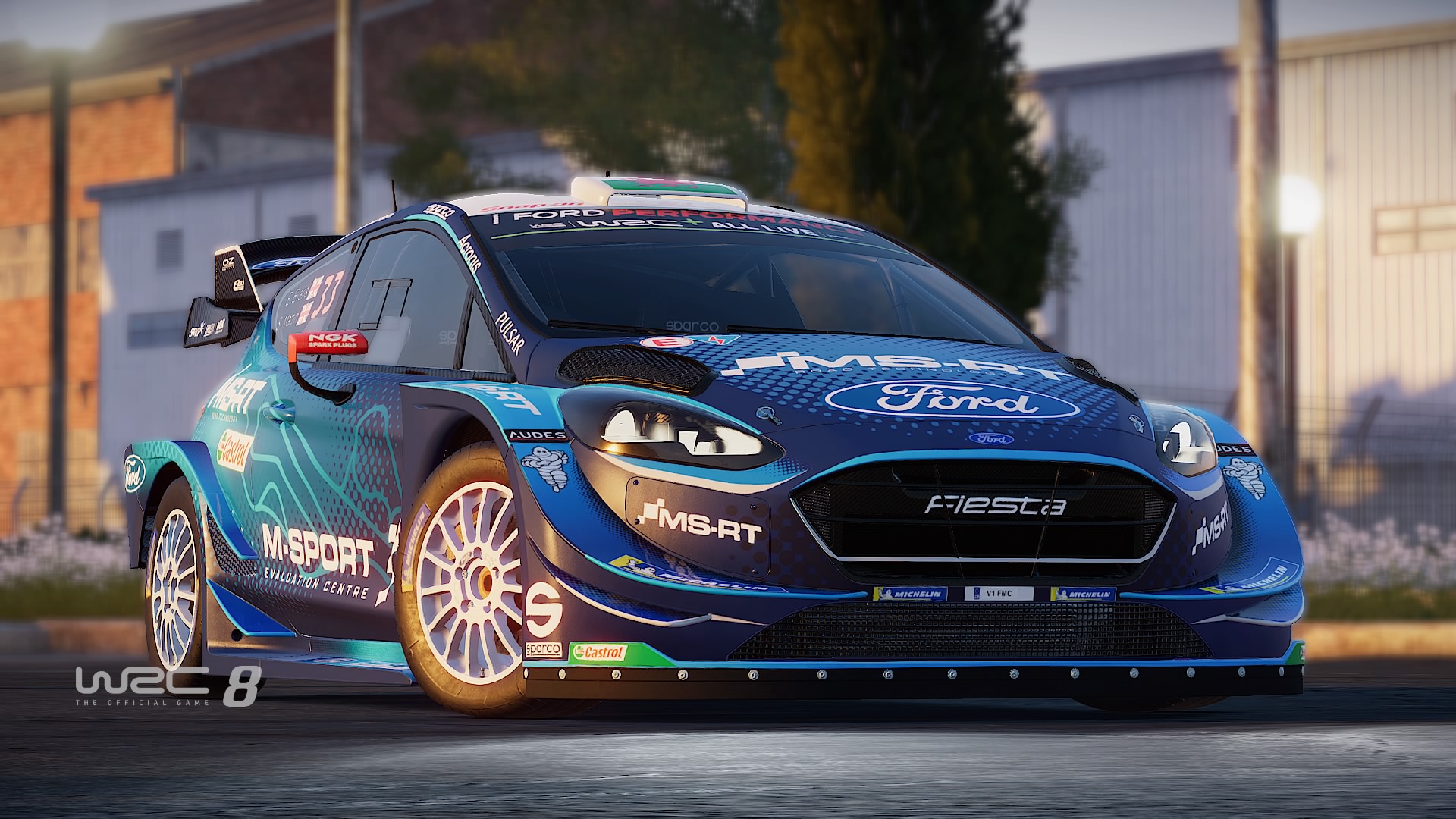 Like a large jump at the end of a long Finnish country road, the next generation of console hardware is barrelling towards us at quite a speed.

And as is so often with the launch titles of new consoles, it looks like the PlayStation 5 and the Xbox Series X will arrive with plenty of racing games to choose from.

Most excitingly for rallying fans, we already know that the two major rally franchises will be making the leap into next-gen with Codemasters’ Dirt 5 and Kylotonn’s World Rally Championship-licensed WRC series both announced to be playable on the new systems.

But, much like the return of real-life rallying, the arrival of the new consoles still feels achingly far away. So, while we all sit in wait, how does the World Rally Championship’s latest officially licensed title fair if lockdown is giving you the urge to go virtually off-roading?

Contrary to what the title suggests, WRC 8 is actually the fourth entry in the long-running officially licensed rally game series from developers Kylotonn. Emulating the full 2019 championship, the game features the series’ three categories – WRC, WRC2 and WRC Junior – with over 50 driver and co-driver crews to drive as, with all 14 championship rallies represented also.

As with all other major licensed racing games, the heart of WRC 8 is its extensive career mode. Similar to Codemasters’ F1 series and Milestone’s Moto GP franchise, you create your own driver before trying to take on the world’s premier rallying competition, while helping to direct a lot of the behind the scenes action for your team.

There’s a lot to the career mode which begins, unsurprisingly, in the WRC Junior category with opportunities to move up the levels based on your success. There’s quite a lot of management to do when you’re not behind the wheel. From hiring team personnel and deciding which perks to apply to taking part in development tests outside of rally weekends to earn extra money and points to develop your car or facilities, the career mode in WRC 8 feels significantly more involved than some of its peers outside of the actual competing.

The game is a little frustrating in the opening phases as it insists on hand-holding you through every single aspect of the menu piece by piece, rather than letting you explore things at your own leisure. But with so much stuff to do back at your factory, it certainly helps prevent you from feeling overwhelmed by it all.

Rather than go for an uncompromisingly authentic experience, WRC 8’s career mode definitely feels very gamey at times. For instance, you can earn additional manufacturer affinity by completing special objectives either in a single rally event or over a few. Some of these objectives feel a little contrived: Why a manufacturer would ever want one of their drivers to compete in a rally without using a particular tyre compound is a little hard to fathom.

It doesn’t take long to get through rallies and events, so WRC 8’s career mode passes you by more quickly than that of rival titles. While you can restart stages if you mess up, you do lose rewards for restarting, while you can opt to turn off the ability to retry a stage completely at higher difficulties, leading to a much more authentic – and rewarding – gameplay.

Once you’re out on the road – or off it as it may be – WRC 8 is certainly a challenge.

While the handling model isn’t quite to the level of Richard Burns Rally in terms of authenticity, WRC 8 strikes a similar balance to Codemasters’ Dirt series where even a single mistake or misjudgement can cost you tens of seconds or end your rally completely. And yet, when it happens, it always feels like it truly was your fault.

The cars are very sensitive, especially on a controller, making it hard to be precise in your line and requiring constant adjustment as you try to maximise the speed of these beasts around gravel, dirt, snow, tarmac and more.

Unsurprisingly, the WRC Junior cars are more forgiving than the top class machines which can boast eye-watering acceleration, especially on asphalt. Thankfully, there are traction control and ABS assists to help give you a little more margin for error when you’re starting out.

Any rally game is only as good as the stages you can drive and Kylotonn have crafted some truly punishing stages for WRC 8.

From the icy roads of Monte Carlo to the gravel roads of New South Wales in Australia, every rally of the 2019 WRC season is represented by a single large environment made up of two to three sections with reversed options that together act to make up the stages you race against the clock.

While the stages perhaps lack in quantity they certainly don’t lack in quality. Heavily inspired by the real world stages that make up the championship, Kylotonn have done a superb job of constructing environments that are truly believable. From snaking around access roads and tight chicanes and hairpins in Germany to coursing through narrow, rocky terrain in Argentina to the slippery, snowy tundra of Sweden, every rally feels distinct and interesting in its own way.

From packs of spectators setting off flares to the leftover timber lining the side of the roads in Wales, there’s a wealth of details to the environment that make the stages feel like genuine excursions through the locations featured, rather than offroad courses simply set in them. Not that you’ll be paying much attention to them as you fly by.

Each stage has dynamic weather and lighting options, meaning you can take on every stage in any conditions you’d like – if you fancy shredding your nerves even further.

The majority of stages are only around five kilometres or so in length, meaning stages only last around five or six minutes. However, every rally has a complete version of a stage that combines the various individual sections into a single stage of around 15-20km in length.

It is perhaps in these stages where WRC 8’s gameplay shines brightest. Spending a solid 12-15 minutes of driving on the ragged edge without any margin for error is a major challenge of concentration and endurance.

It’s a much more authentic representation of how difficult it is to compete at the highest level of world rally and will only increase your appreciation of the skills of these offroad artists. It’s almost a shame that the majority of the game’s stages couldn’t be to this length and quality, even if to suggest that would be to ask far too much of current generation hardware and developer capacity.

Graphically, WRC 8 more than holds its own. While not a match for the likes of, say, Gran Turismo Sport, WRC 8 is a good-looking rally game. One particular standout is in the game’s lighting, as dense woodland casts dark shadows over the gravel roads making it hard to gauge your turn-in points for corners. Missing a braking point and smashing your headlight during a night stages brings a heavy penalty – you are plunged into inky blackness through which you truly cannot see where you are going.

While the image quality is impressive, the framerate isn’t as smooth as you’d hope at times – at least on the standard PlayStation 4 that WRC 8 was reviewed on. It’s by no means unmanageable, but with so much information to process to be able to pick your braking and turn-in points, it becomes a little trickier to be accurate when things occasionally dip under 30-frames-per-second.

When it comes to audio, WRC 8 replicates the sound of the front-wheel-drive WRC machines admirably with all the whistles and pops that come with turbo engines. Your co-driver is certainly informative, but if you’re used to the likes of Nicky Grist in the Dirt series, it may take some getting used to. English language pace are delivered in the manner of a well-to-do University of Cambridge professor who moonlights as a rally co-driver at the weekend.

Outside the standard career and single player rally modes there is a useful testing option which provides a large open-world space outside of your career mode factory to drive around at your leisure. You can pause and dynamically adjust the car’s set-up on the fly, making it a great tool for trying out various suspension and wheelbase settings and generally getting more comfortable with the cars in a controlled setting.

As the licensed World Rally Championship game, there’s an official esports aspect to WRC 8 that offers a series of opportunities for you to pit your skills against your fellow players across the world and potentially be invited to compete in officially-sanctioned esports competitions should you be successful enough.

It’s not quite the same as the extensive monthly challenges offered by Dirt Rally, but if you’re serious about taking your virtual rallying to a competitive level, you’ll have plenty of ways to test your abilities against fellow players.

At its core, WRC 8 really is aimed directly at WRC enthusiasts. Having the chance to compete against names like Ogier, Tanak and even Loeb over hallowed rallying ground like Colin’s Crest or Ruuhimaki will be most appreciated by hardcore rallying fans. But while Dirt Rally may be the standout rallying franchise following its two successful latest entries, there is a lot to enjoy about this latest WRC game.

With the next-gen future of the WRC franchise already ensured, it feels like we could well be about to head into a golden period for rally game fans.