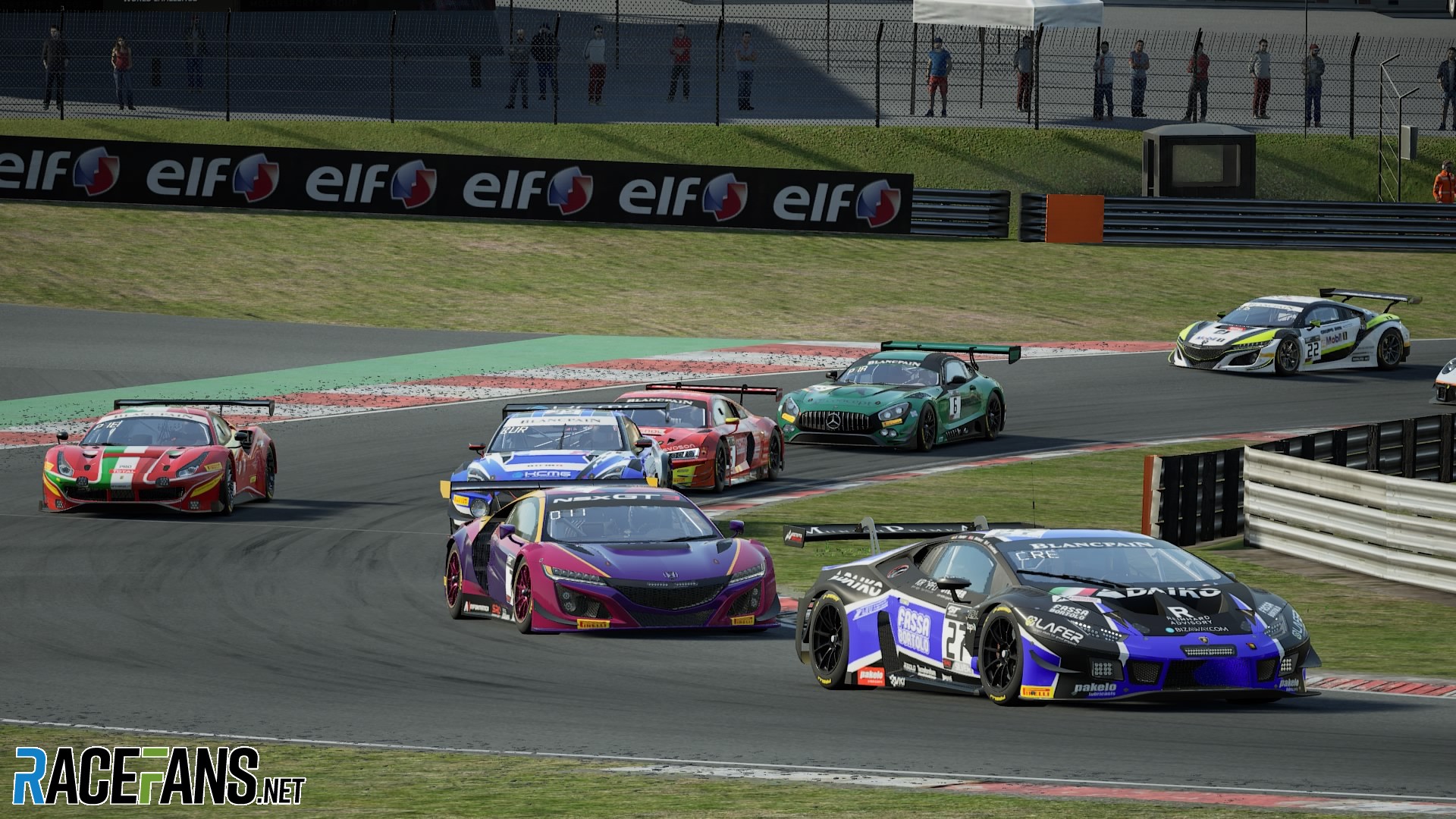 When Italian developers Kunos Simulazioni released Assetto Corsa for PC in 2014, they quickly attracted a healthy community of racers and modders and carved out a niche among a plethora of sim racing titles.

While lacking the presentation levels of the bigger budget games on the market, Assetto Corsa’s driving physics received praise from veteran simracers and even real-world drivers.

Kunos refined their simulation mechanics and released Assetto Corsa Competizione for PC last year. Now, console players finally have the chance to get behind the wheel of what could well be the most realistic racing simulator ever brought to PlayStation and Xbox platforms.

So how successfully has the transition to current-gen consoles been made? First, a word of caution. On console, Assetto Corsa Competizione has performance issues that can, at the worst instances, significantly affect your ability to play the game.

In terms of frame rates, Assetto Corsa Competizione runs at far fewer frames per second than its peers like Forza, Gran Turismo Sport, Project CARS or even Codemasters’ F1 series. This wouldn’t necessarily be a problem if the lower frame rate was locked at a consistent rate, but on the base PlayStation 4 that RaceFans reviewed Assetto Corsa Competizione on, the frame rate varied noticeably even while lapping circuits alone in practice mode.

Also, when it comes to the enhanced consoles of PS4 Pro and Xbox One X, frame rates are closer to 30fps than 60fps, which will be disappointing to owners who may have invested in the upgraded hardware exactly for this kind of game.

Across a number of online forums, Assetto Corsa Competizione console players report varying levels of consistency in how smoothly the game runs for them, so it may simply be a case that your mileage may vary in how the game runs for you.

In the worst example RaceFans experienced while reviewing the game, an attempt to run a simulated Spa 24 Hours over an hour-long race had to be abandoned as the frame rate fell to simply unplayable levels while approaching Eau Rouge lap after lap. In fairness to Kunos, this particular instance does seem like an outlier compared to other reviewers and players’ experiences with the game, but that doesn’t change the fact that it affected our ability to play the game as intended.

Kunos have confirmed they are working on patches for the game to improve its performance on consoles, so the situation should improve down the line. However, the fact that a game can be released for £34.99 with these kinds of performance issues possible is certainly a major concern. If you’re considering buying the game during this launch period, it’s important that you’re aware of these potential pitfalls and decide what’s right for you.

With that said, let’s focus more on the qualities of Assetto Corsa Competizione as a racing game and, more importantly, as a simulation.

Rather than the mishmash of circuits and cars of the original Assetto Corsa, Kunos opted for a far more focused approach to Assetto Corsa Competizione.

The game only simulates the SRO-promoted GT3 racing series of the GT World Challenge. All cars and circuits from both the 2018 and 2019 seasons are present, with various models of GT3 cars from the Bentley Continental, Ferrari 488, Honda NSX and more to race with around tracks such as Silverstone, Spa-Francorchamps, Misano and Zandvoort.

This laser-focus on a single form of racing is to the game’s benefit, as it has allowed Kunos to make arguably the most impressive virtual representation of authentic GT3 racing we’ve seen in simracing. As possibly the most successful category of motorsport of the 2010s, GT3 cars offer a fantastically fun challenge that are easier to get to grips with than, say, Formula 1 or prototype Le Mans cars, but require a lot of practice to get the very best out of.

But what of the highly-lauded physics? Is the handling model really worth the price of admission?

We all know that motorsport is about precision, subtlety and driving that fine line on the edge of control and no other racing game demonstrates that as vividly as Assetto Corsa Competizione.

Driving those first laps in the game is reminiscent of your first time karting. You quickly develop a sense for the grip levels of the tyres. It’s communicated well, especially through a decent force-feedback steering wheel. It feels like pulling a rubber band – demand too much too quickly and things will snap, but if you’re smooth and gradual, you can often lean more on the tyres than you’d think.

If you’re willing to invest time into it, Assetto Corsa Competizione really will make you a better driver – and not just in terms of pure lap time. There’s a heavy emphasis on driving consistently in the game. You’re constantly told to ‘drive to your pace’ and are actively rewarded for being smooth and disciplined.

At all times, the game is assessing your driving and rating you using a numbered system in areas such as car control, track competence, consistency, racecraft and safety. The more you drive, the more rating areas you’ll unlock. It all adds up to give you an overall driver classification, identical to the same system the FIA use for real world GT racers. You start off as a Bronze category driver, but with discipline and speed, you can ultimately aim to earn Platinum status.

It means you have to drive like this is a real car, with real consequences for making mistakes and crashing every single time you get behind the wheel. If it sounds like Assetto Corsa Competizione is taking itself seriously, it is. This unapologetic approach to realism is what sets this game apart from others on console and means the more effort you put in, the more you’ll get out of it. In a smart move, you can always ‘pause’ the assessment system if you want to let a friend have a go or if you want to just thrash about.

Even getting things wrong feels so much more realistic. There’s a violence to collisions, bouncing over kerbs and running onto the grass that just feels so much more like you’re driving a real, fragile racing car than most other games. After accidentally putting two wheels on the grass on the run to Stirling’s Bend at Brands Hatch and careening straight into the barrier, it’s striking how even crashing in Assetto Corsa Competizione feels authentic.

With the actual driving experience the key focus of Assetto Corsa Competizione, the game isn’t exactly dripping with features and game modes compared to other racing games. You can set a fully customised race weekend from a short 20 sprint to a full 24 hour endurance, take part in free practice test sessions, drive in ‘hot stint’ challenges to train consistency and more. You can pick a licensed car to compete in either the 2018 or 2019 GT World Challenge seasons, or you can drive as yourself in career mode.

The career mode takes an interesting approach to evaluating your skills in a series of tests before putting you into the championship with the AI level set depending on how you perform in these tests. It sounds like a good way to acclimatise you for the mode, but it doesn’t always work in practice. After dominating the first two races from pole by a ridiculous margin, there was no way to change the AI difficulty for the subsequent race weekends. It’s good that there is a career mode in the game, but don’t be surprised if you spend most of your time setting up your own individual race events instead.

Multiplayer is where a lot of players will be investing in Assetto Corsa Competizione for and Kunos take a boldly discinplined approach to racing online. You are forbidden from competing online without first earning a minimal safety rating offline. It sounds harsh, but it shows how seriously Kunos expects players to take racing online. You should hopefully find far fewer ‘rammers’ and better overall sportsmanship with Assetto Corsa Competizione than other racing games.

When it comes to presentation, aside from the matter of performance, Assetto Corsa Competizione lacks the polish of other racing titles. The on screen HUD isn’t as sharp or attractive as F1 2019 or Gran Turismo Sport, but there is a clear emphasis on function over form, which does ultimately suit what Assetto Corsa Competizione is trying to achieve.

From live tyre pressures and temperatures, a live timing timer, session information, race control information and even more data available from the onboard monitors of the cars themselves, there is a wealth of information at your demand. Perhaps the most valuable guide is the radar that sits slap in the middle of the screen and gives you an exact idea of how close you are to your rivals. With no VR or multi-screen options for console players, this becomes a valuable tool for keeping that safety rating up and it would be good to see other racing games adopt it too.

As a port of a PC game, the menu system isn’t at all optimised for navigating with a controller. It’s not unusable by any means, but it can be easy to get lost trying to find the right option at first.

While the car and track models themselves are definitely pretty and look great in replays, there’s an overall lack of style in the game compared to F1 2020 or GT Sport, especially when it comes to pre-race and podium presentations – although, of course, that’s not really what Assetto Corsa Competizione is aiming for.

You can make a series of customised cars for you to drive using a fairly basic livery editor that comes included with the game. Again, it’s nothing compared to GT Sport or Forza, but considering Kunos could’ve simply not bothered to include one, it’s certainly welcome to have.

Ultimately, Assetto Corsa Competizione does its job as a proof-of-concept for simracing on consoles fairly well – even if it can feel like playing a game on the bare minimum recommended specs at times.

With a pack of DLC tracks expanding the circuit roster to Mount Panorama, Laguna Seca, Suzuka and Kyalami, GT4 DLC on the way and inevitable patches to help improve the game’s performance, it really does feel like Assetto Corsa Competizione is a game that will only improve over time.

Despite some technical quirks, Assetto Corsa Competizione shows that ‘hardcore’ simracing is possible on consoles and, hopefully, will show that an audience is there for it too. It is sincerely hoped that this isn’t the last time Kunos opt to port one of their games over to some of gaming’s most popular platforms.

17 comments on ““Assetto Corsa Competizione” – PS4 and Xbox One review”