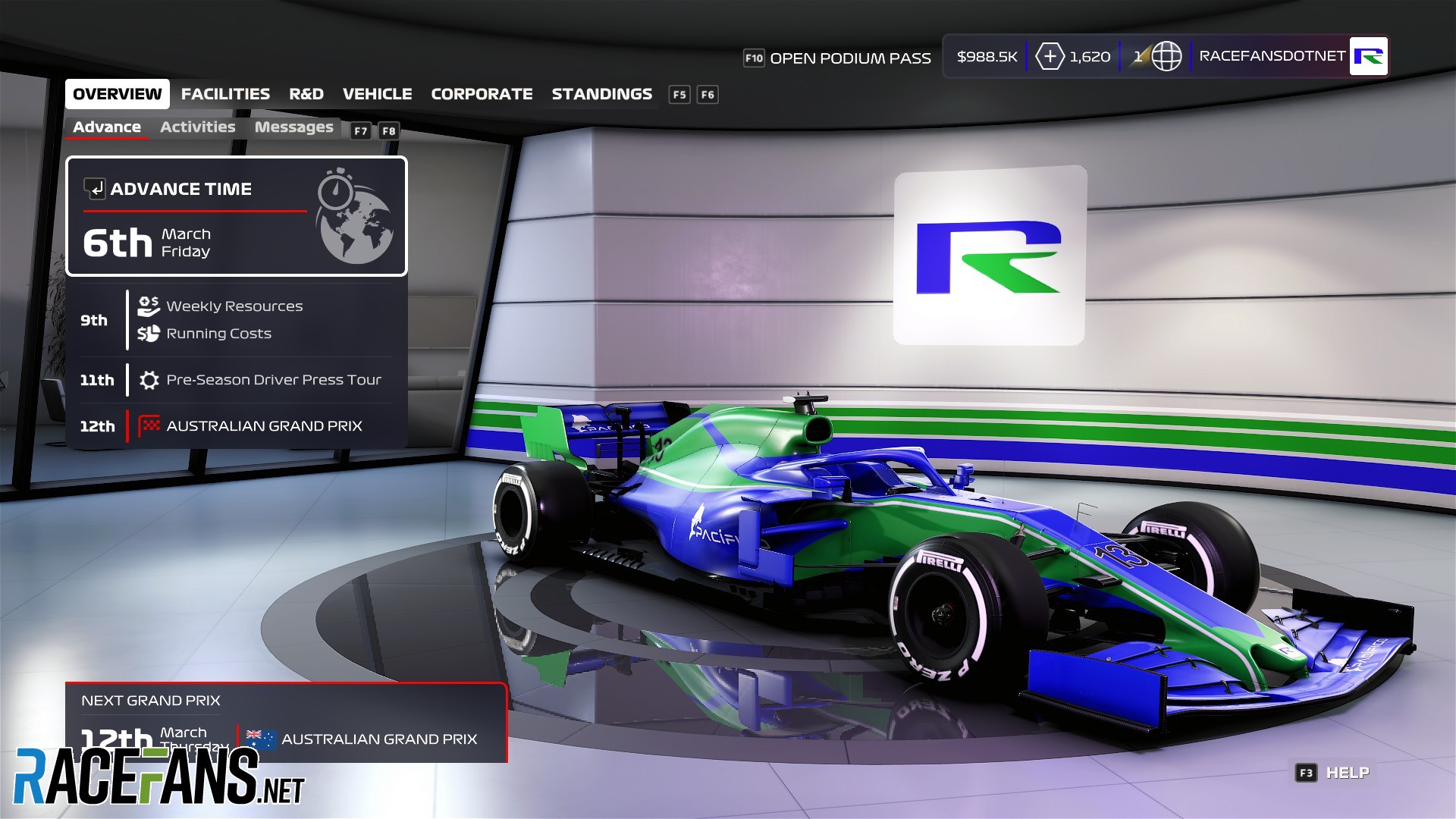 In Codemasters’ officially licensed-series of F1 games, the career mode has always been at the core of the game-play.

Having benefited from a range of improvements in recent years and introduced driver transfers between teams last year, this mode has become a major selling point for the series.

But the release of F1 2020, which we’ve reviewed today, sees arguably the biggest ever addition to the franchise and one of the most heavily requested features in the arrival of MyTeam. Never before have players been granted the ability to invent an entirely customisable new team to the grid and build them into a championship contending outfit in an official F1 game.

Given how eagerly anticipated this new feature is, and how many new factors it introduces to the game, we’ve decided to take an in-depth look at what MyTeam has to offer.

First of all, before your shiny new F1 team makes its debut, it needs an identity. After selecting your livery design, colours and logo and giving your team a name, you select a title sponsor, engine supplier and pick a team mate to recruit from the 2019 Formula 2 field.

The customisation works identically to last year’s multiplayer car, where you pick a pre-designed livery and adjust the colours to your liking. At time of review, the car liveries were disappointingly limited, but that is mainly because liveries will be unlocked through the Paddock Pass which only goes live today.

Once your team’s look is set, you participate in a short introduction interview with a frighteningly accurate avatar of Will Buxton, in which your answers help to determine what areas of your car you want to have an additional boost to.

At its heart, MyTeam takes the best parts of the traditional career mode and revolutionises them with substantial new management mechanics. As team owner and driver, you are in full control of team finances as well as car and factory development. Everything you do earns you money to spend on upgrading facilities from your aerodynamic and chassis departments to marketing, while your R&D points determine how much you can improve your car’s performance.

Between race weekends, you can choose what activities your team performs, with different rewards depending on what you do. If you only have a week between races, do you opt to send your rookie teammate on a PR course to help make your team more attractive to sponsors, or do you focus on team building for your chassis department to generate more resource points for upgrades?

If you’ve never played a management mode in a sports game before, it can seem a little daunting with so many options to invest in, from your car to your facilities to perks for you and your team mate. However, once you get into the swing of it, it’s incredibly rewarding to see your decisions paying off and feeling your team’s performance growing over the seasons. With how quickly the game processes your schedule, you also never get bogged down in the management side of things, meaning you’ll be spending the vast majority of your time racing.

One of the most enjoyable touches is in how your development is reflected visually in how you can see each department evolve through the scenes that play in the background. Going from your team mate playing F1 2020 on a wheel stand (who can resist a meta-joke like that?) and a small TV to a full-motion rig when you invest in your simulator is a great way to show how your outfit is developing.

The sense of ownership you feel is something the traditional career mode just cannot match. As you’ll start the mode nearer the back of the grid than the front, eventually scoring that first point will feel far more gratifying than winning a race in a Ferrari in career mode ever could.

Your team mate will play a crucial role in your team’s success and that’s why the enhanced dynamic driver market is potentially the most important improvement to this year’s game. All available drivers across F1 and F2 have an Acclaim level, reflecting their value in the driver market. Each driver is rated based on pace, racecraft, awareness and experience, with the better drivers demanding higher salaries.

If your team is of low Acclaim, you will have no chance of signing any of the F1 drivers save for perhaps Nicholas Latifi. As your team’s performance improves, so does your reputation. Eventually, you can approach established drivers like Daniel Ricciardo or Sergio Perez and if you satisfy their expectations, they will be willing to sign with you as long as you can afford to pay them.

But just like drivers’ reputations can rise and fall over seasons or even from race to race, drivers’ abilities improve and decline over time too. You could find that race-winning drivers like Valtteri Bottas or even Sebastian Vettel could lose Acclaim over time if they struggle against team mates, while younger drivers like Lando Norris can become hot commodities if they enjoy success on track. You can even hire an F2 rookie driver and gradually build them into a title contender, if you’re willing to invest the time and resources into them.

As the seasons so by, drivers will retire and be replaced by Formula 2 drivers, with the 2020 field set to be added to the game in a future update too. If you pursue a driver who is sought after by multiple teams, you can engage in a bidding war to try and win their services. It brings a real authenticity to MyTeam and the driver market and leaves you constantly questioning how much you should invest in getting that marquee driver on your team.

In an incredibly welcome design move, you’re free to edit and customise all aspects of your created team at any point. From the livery and colours to the race suits, logo or even your team’s name, you can change whatever you like, whenever you like. If you fancy changing your look for the new season or to roleplay a redesign after a new title sponsor or engine supplier, you can do it.

Just as in career mode, you have the option of running a full 22 race calendar or a shorter 16 or 10 race season instead. Wear scales appropriately with a shorter season, so you’ll still find yourself having to be mindful of power unit component wear and grid penalties even towards the end of a ten race season.

There is so much that MyTeam brings to F1 2020 beyond a simple novelty of seeing a car you’ve customised battling alongside Ferraris, Red Bulls and Mercedes. It’s a deep and immersive feature that may well prove more rewarding than any career mode you’ve played in any F1 game to date.

We tested the PlayStation 4 and PC version of F1 2020. The PC used the following hardware: