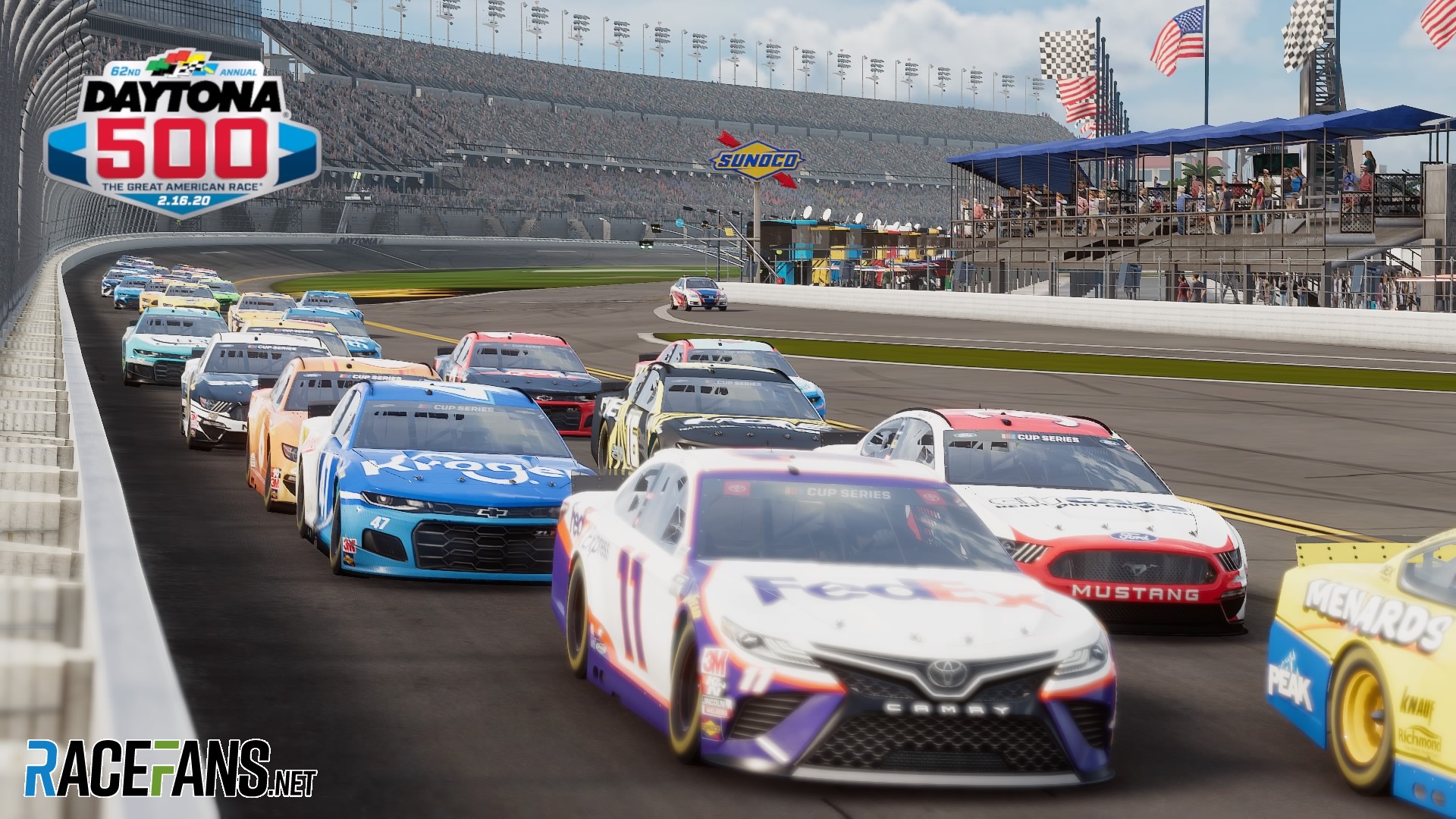 NASCAR is arguably motorsport at its most raw and competitive. Races feature 40 cars lapping at average speeds of 250kph separated by mere millimetres.

Sorry, make that ‘average speeds of 160mph, separated by less than an inch’…

This deeply American of motorsports can be overlooked and sometimes underestimated by fans across the rest of the world. That hasn’t stopped oval racing from becoming one of the most popular disciplines of simracing online.

From the classic NASCAR Racing series by Papyrus to iRacing, with the officially sanctioned ‘eNASCAR iRacing Pro Invitational Series’ providing fans with plenty of action and controversy to discuss during the recent months of lockdown.

So for our next stop on RaceFans’ whirlwind tour of officially licensed motorsport games, it’s time to climb through the driver’s side window and get virtually strapped into the seat of NASCAR Heat 5, recently released for PC, PlayStation 4 and Xbox One.

Developed by 704 Games, NASCAR Heat 5 features all three official series of the sport – the top-level Cup series plus the second-tier rung and trucks categories – as well as the Xtreme Dirt series for dirt-track racing. Over 30 tracks are included with over 100 official drivers and liveries, meaning this game is certainly not light on content.

Unlike NASCAR Racing 2003 or iRacing, NASCAR Heat does not strive to offer a hardcore simulation of premier stock car racing. Instead, it aims to strike that same balance between accessibility and authenticity that F1 2020, Moto GP 20 and WRC 8 do for their respective series.

Even if you’ve never taken a virtual stock car out on track before, you’ll quickly find yourself getting up to speed. NASCAR Heat 5’s cars are remarkably forgiving on-track with most of the default set-ups, even if you turn off the variety of driving assists available. The emphasis here is firmly on the racing and NASCAR Heat 5 allows you to dive straight in without needing to initiate yourself with the complexities and technicalities of the real sport if you don’t want to.

You can tinker with the nuances of your car’s setup if you like, but you can also take advantage of a simple slider system that adjusts your car’s settings between ‘tight’ and ‘loose’, depending on your preference. There is a brand-new free testing mode for this new version, which is certainly welcome for those who enjoy experimenting with settings and investing time perfecting their lines.

The challenge in NASCAR Heat 5 however isn’t from simply pedalling the car around the track, but from racing. The AI opponents are solid, if unspectacular. Hooking up on superspeedway races with a rival so you can both benefit from a spot of bump-drafting is a lot of fun and they hold their lines convincingly around most tracks. Pack racing can be a thrillingly unique experience, although it can be hard to keep rigidly to your lanes, especially while racing with a controller.

They are perhaps a little less aggressive than you’d expect even at high difficulty settings. Driving clean around the outside of a notorious driver like Kyle Busch without too much trouble feels a little hollow. There is a rival system that claims to make AI drivers more hostile towards you if you’re a little too rough with them, but it’s nothing that will make you want to reconsider that last-lap lunge.

One of NASCAR Heat 5’s best features is in how customisable the gameplay is. To their credit, 704 Games have included a series of highly welcome gameplay modifiers that can be used to influence elements such as field spread and slipstream effect, how severely contact can upset your car and even how likely the AI is to lose control of their cars and spin. It allows you to tailor the gameplay to better provide the kind of racing experience you want.

At the heart of the game is the career mode. As you’d expect, it allows you to create your own driver and take them from whatever series you want all the way to become a Cup series contender. You have the option to race as a freelance driver and sign for any team who’ll offer you a drive, or create your own team and hire staff and even other drivers to race for you.

Being a team owner is easily the most enjoyable mode of the two. It’s not a complicated system: Your responsibilities boil down to hiring staff with specialities in areas like engine or aero and deciding which sponsors to sign with. With better results comes more cash which you can use to train or hire new staff to improve the performance of your cars. Eventually, you can operate a field of multiple cars across the divisions, all earning you winnings you can invest back into the team.

You have free choice of which of the four series you want to start in, so if you want to begin with dirt racing and build up to the Cup series, you can, or if you just want to dive straight in with NASCAR’s elite, you’re free to do that too. It’s not as complex or involved as, say, F1 2020’s MyTeam mode, but it certainly is the most rewarding single player mode to play, even if your car will be chronically under-powered at the very start.

While the racing itself is enjoyable, things are sadly lacking somewhat in the presentation side of NASCAR Heat 5. Races lack the bravado and pageantry that are hallmarks of the real life sport. Racing in the iconic Daytona 500 just feels like a standard race without any special cinematics to acknowledge that this is the most important race in the sport.

Whereas previous NASCAR games have featured the FOX broadcast team of Mike Joy and Darrell Waltrip setting the mood by discussing the merits of a track before a race to add flavour and that touch of authenticity, there’s no commentary or recognisable broadcast elements to help bring you into the game world.

You do get to carry out some celebratory doughnuts when you win, but there’s little else to help truly immerse you and make you feel like you’re a real stock car superstar. Even caution periods are computer-controlled, taking away all skill from restarts or navigating crowded pit lanes under yellow. It’s a shame that with the degree of personalisation the game offers, there’s no opportunity to let players do these themselves if they wish.

Graphically, NASCAR Heat 5 is solid. Car models are well detailed and tracks look as realistic as you could expect using current hardware. There is a notable increase in frame rate if you toggle the virtual mirror off on consoles, which means if you value silky-smooth frame rates, you might find yourself activating the mirror only when you really need to.

There is an awful lot that NASCAR Heat 5 does well, but very little beyond that. Racing stock cars does offer a refreshing change from the plethora of racing game options on the market, but it’s hard to shake the feeling that previous NASCAR games have offered deeper and more immersive takes on the sport than this game does.

It’s unfair to expect 704 Games to serve up the same slickness of presentation that an EA Sports budget can provide or the nuanced physics and realism of NASCAR Racing 2003, but there is certainly more potential to be realised from this perfectly decent game.

If you’re not much of a NASCAR fan, you will certainly still have fun jumping into races in NASCAR Heat 5. Just don’t be surprised if it fails to unlock a newfound passion in you for the truly unique motorsport that is NASCAR.

Buy NASCAR Heat 5 for Xbox One