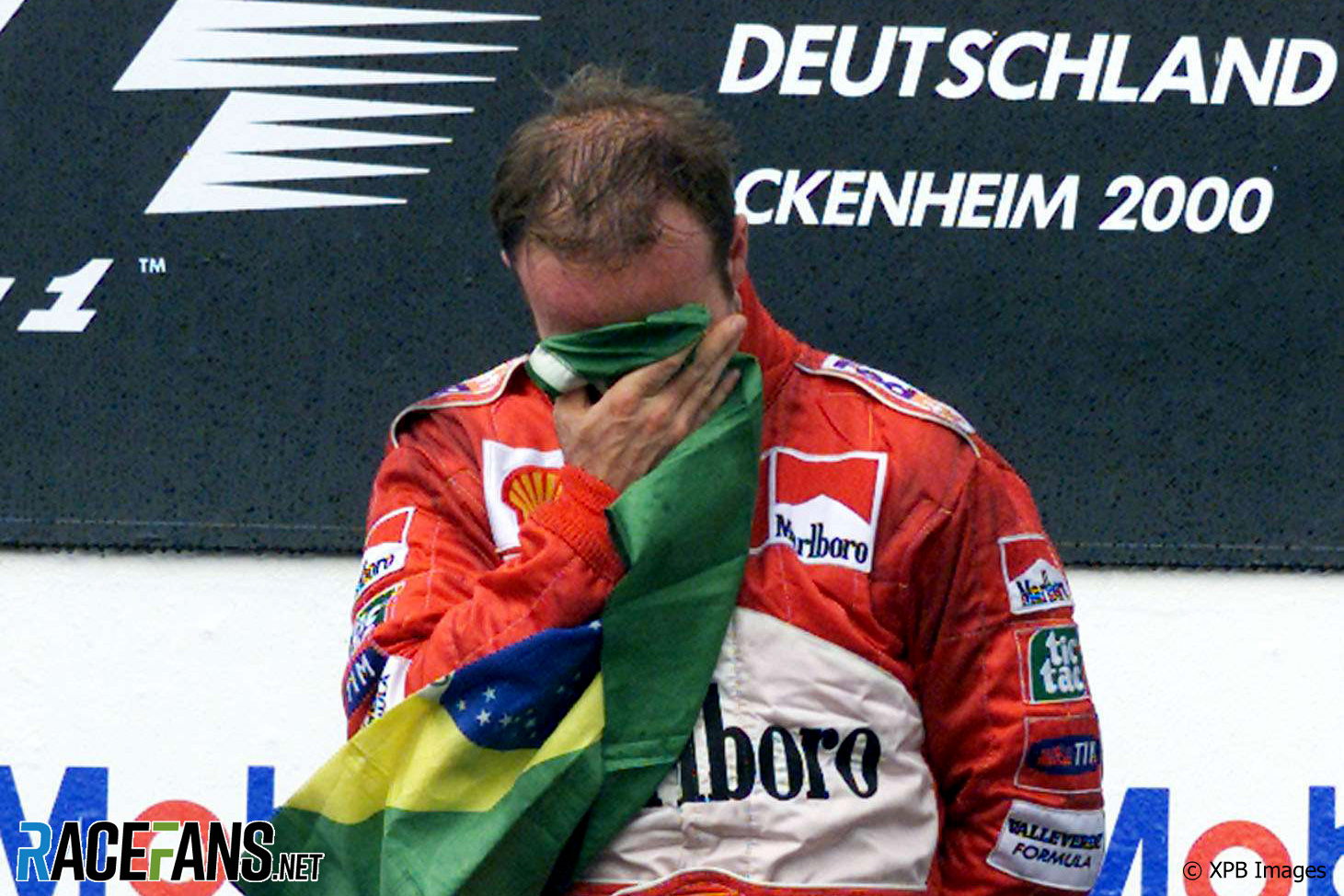 Michael Schumacher’s push to become Ferrari’s first drivers’ champion for more than two decade was coming under severe pressure as the championship returned to Germany for his second home race.

Reigning champion Mika Hakkinen had been back to his best at the previous round in Austria, winning comfortably. Schumacher had retired in a first-lap crash, but surely lightning wouldn’t strike twice at the Hockenheimring…

In 2000 Hockenheim’s circuit was still a terrifying, high-speed blast through the trees known for eventful races punctuated by the occasional expiring engine rather than outright exciting grands prix. But the unique layout added variety to the calendar; the new configuration introduced two years later has never inspired in quite the same way.

The German fans had lots of home talent to cheer for. As well as the Schumacher pair – Michael and Ralf – Heinz-Harald Frentzen and Nick Heidfeld were also in the field. Two German engine supplies were competing at the sharp end too: BMW and Williams, and the mighty McLaren-Mercedes. But as it would turn out, at least one spectator was determined not to see a Mercedes triumph.

In the title fight Schumacher was six points clear of David Coulthard, with Hakkinen just a further two behind. With just seven races left, points were getting scarce, and a title fight which had seemed a foregone conclusion had tightened up.

Elsewhere in the field Eddie Irvine was back in the Jaguar having recovered from a swollen intestine, and Jordan were finally able to introduce their updated car the EJ10B following successful crash testing.

Once again changeable weather was the order of the day for the practice sessions, with three of the four practice periods hampered by damp conditions. The main drama came at the very end of the practice periods when Schumacher crashed and had to switch to the spare Ferrari for qualifying.

The tricky conditions continued into the grid-setting hour with intermittent showers keeping the track consistently damp. Coulthard claimed an impressive pole position, his second of the season, a whopping 1.3 seconds clear of Schumacher.

Surprisingly, Giancarlo Fisichella put him Benetton in among the McLarens and Ferraris, edging out Hakkinen by three hundredths of a second. Just as surprising was Pedro de la Rosa’s Arrows in fifth place, a whole two seconds adrift of Coulthard, sharing the third row with Jarno Trulli in the first of the Jordans.

Down in 18th place and seemingly out of contention before the race had even started was Rubens Barrichello’s Ferrari. He had been forced to use Schumacher’s car due to mechanical problems.

Race day dawned bright but the forecast suggested things would change during the race. Barrichello gained a place early on as Jenson Button failed to get away from 16th place on the formation lap, forcing him to start from the back of the grid.

As the lights went out Hakkinen made a flying start, clearing both Coulthard and Schumacher into turn one. Approaching the first corner the Ferrari pilot moved across to reclaim the racing line, but failed to realise Fisichella was still alongside him.

The Benetton and Ferrari tangled, putting both drivers into the tyre wall and out of the race. This was a disaster for Schumacher – the second time in as many races that he’d not made it through turn one. Now the McLaren pair had a clear shot at the race win and championship lead.

Trulli’s Jordan led the chase of the McLaren drivers. Further back, Barrichello was the big winner on the opening lap, moving up to 10th. By lap five Ferrari power had motored him up to sixth place.

By then Jos Verstappen’s engine cover had made a bid for freedom, putting him out. The next retirement was Johnny Herbert whose Jaguar suffered gearbox failure on lap 13.

At the front of the pack thoughts were starting to turn to strategy, with Barrichello and Frentzen making stops on laps 17 and 18 respectively. The Ferrari driver’s early visit indicated he was running light to ease his passage through the field, though it would inevitably put him at a disadvantage on a track where a one-stop strategy was de rigeur.

Meanwhile the McLarens were busy pulling clear of the field, with Hakkinen 1.4s up on Coulthard, but the pair of them some 22s up the road from Trulli in third. As the halfway point in the race approached, the silver cars looked on course to give German power a one-two at home.

But on lap 25 came an unexpected shock which dramatically changed the complexion of the race. Robert Sehli, a disgruntled former Mercedes employee, ran onto the circuit in a protest to draw attention to his unfair dismissal (the courts eventually agreed with Sehli, awarding him 91,000 Francs compensation in December that year, which would have helped with the fine his track invasion caused).

If his target was Mercedes, it couldn’t have been better timed. His interference prompted the deployment of the Safety Car, which wiped out the McLarens’ lead and handed Barrichello what was effectively a free pit stop. He was now third behind Hakkinen and Coulthard.

As the safety car disappeared everything kicked off; Ralf Schumacher spun out, whilst Jean Alesi and Pedro Diniz had one of the more spectacular collisions of the season, prompting the re-emergence of the safety car.

No sooner had the Safety Car gone in than the rain arrived causing another flurry of stops in the pits. BAR team mates Villenueve and Zonta contrived to hit each other.

Not everyone headed for the pits, however. Barrichello stayed on his grooved, dry-weather rubber and found just enough traction. As the McLaren pair stopped for wet-weather tyres, the driver who had started 18th rose into a remarkable lead.

With just a handful of laps to run the Brazilian stretched his lead to take a popular maiden victory, and achieving unlikely damage limitation for Ferrari. Behind him, Hakkinen led home team-mate Coulthard, leaving the pair level on points, and two adrift of Schumacher.

Button was another driver who starred in the slippery conditions, claiming the best result of his rookie season so far with fourth place. Mika Salo and de la Rosa were the final points-scorers.

While Barrichello celebrated, it was a tough day for his team mate. Schumacher was left counting the cost of another disastrous first lap. His championship lead was now under serious threat.