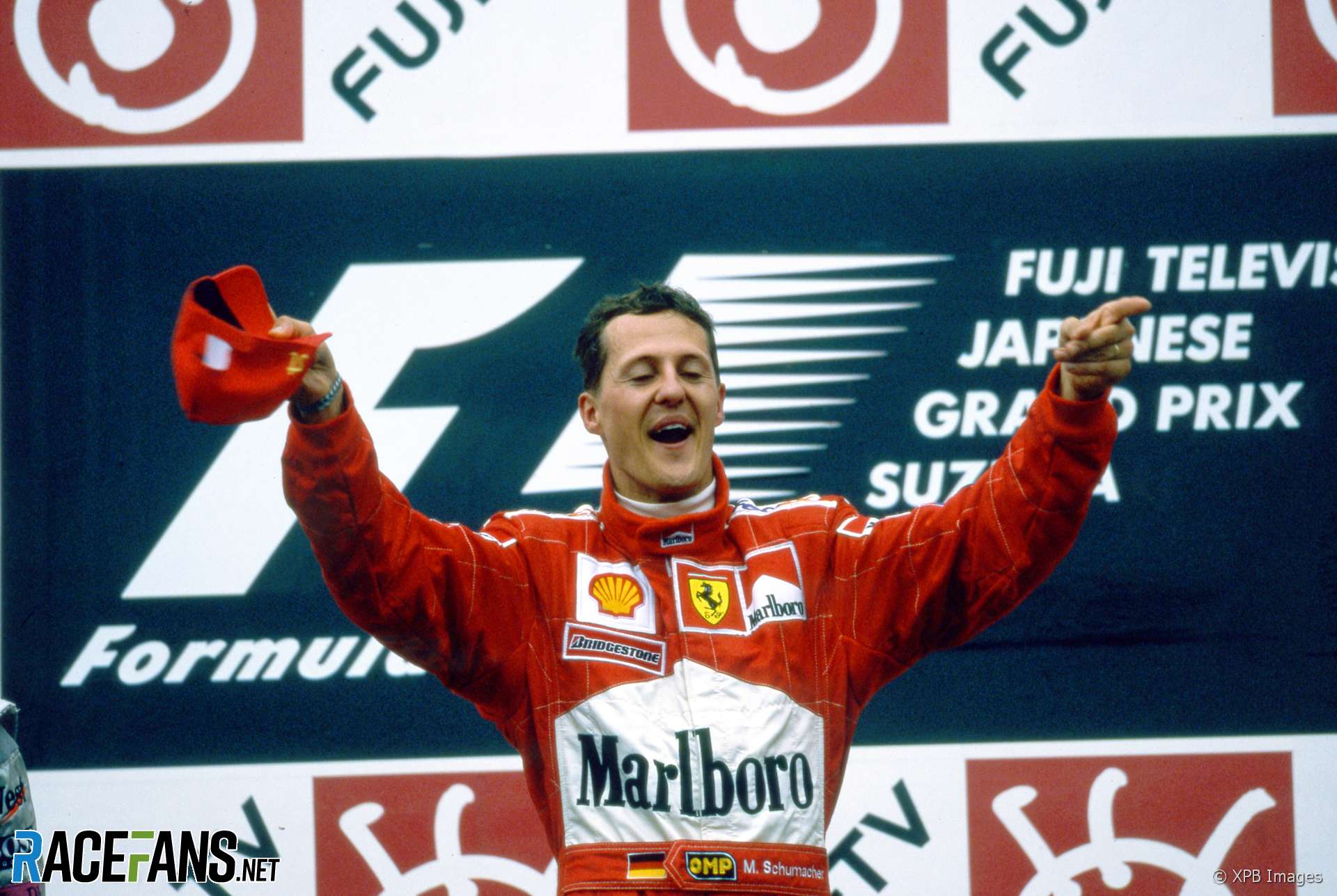 The first of those was the Japanese Grand Prix. Suzuka had been the scene of disappointing season finales for Ferrari in the previous two seasons. This year it was holding the penultimate round, and Schumacher was keen to put a lock on the title at the first opportunity, avoiding the added risks and pressures of a last-race showdown.

The main pre-race controversy came via an FIA announcement that any blocking moves which interfered with the title fight would be met (if sustained) by a black flag. This had been a feature in recent title-deciders, notably when Ferrari-powered Sauber racer Norberto Fontana blocked Schumacher’s previous title rival Jacques Villeneuve in 1997. Depending on one’s perspective, the FIA edict either cleaned up, or removed an element of tactics from the battle.

The points leader set the pace in the first three practice sessions, with Hakkinen the quickest in the final Saturday morning run. The second session was notable for an earthquake which registered 7.1 on the Richter scale being felt at the circuit. It caused no significant structural damage either to the circuit infrastructure or Flavio Briatore’s hairstyle.

The qualifying session was a thriller, the two title rivals exchanging fastest times as they bid for the coveted pole position. Eventually Schumacher claimed his eighth pole of the season just nine thousandths of a second clear of Hakkinen, setting up the race perfectly.

The second row saw David Coulthard clear of Barrichello, before the Williams pair on row three. At this, one of the great driver’s tracks, it was notable that Ralf Schumacher had been out-qualified by his rookie team mate Jenson Button, though the latter was already on his way out of the team, to be replaced by Juan Pablo Montoya.

This ‘Noah’s Ark’ formation continued along much of the rest of the grid, with the Benetton, Arrows, Prost, Sauber and Minardi drivers all qualifying adjacent to each other.

The race itself took place in dry and overcast conditions with a vast crowd of over 150,000 in attendance.

There was initial drama on the parade lap when a hydraulic leak on Hakkinen’s McLaren caused the car to smoke. Fortunately the fault turned out to be no more than cosmetic.

At the lights a fast-starting Hakkinen got the jump and held his nerve into turn one, fending off a dogged challenge from Schumacher. Coulthard slotted into third ahead of Ralf Schumacher and Barrichello. Behind them Jos Verstappen moved up four places, while Fisichella fell eight spots due to an anti-stall system problem with his Benetton.

In the early running Hakkinen was able to build and maintain a slight buffer of a couple of seconds over Schumacher, as both eased away from the rest of the field. This was tense stuff, both drivers on the limit pushing for the advantage.

However for the first third of the race the action was tactical rather than wheel-to-wheel. Through the first round of pit stops Hakkinen retained the advantage, though Schumacher staying out a lap longer, which would later prove important.

In the middle phase of the race the weather changed slightly, tipping the battle at the front. Light rain fell, the track became slippery. Hakkinen, the first driver around each time, was more tentative than Schumacher, who closed within a second of the McLaren.

The Ferrari couldn’t quite draw within striking distance, but was able to pile on the pressure. This was despite Schumacher making slight contact with Ricardo Zonta’s BAR when he passed it.

At the second round of pit stops Schumacher stayed out three laps longer than the McLaren, the Ferrari took full advantage of the clear air, light fuel load and slick pit work to emerge four seconds clear of Hakkinen after his final stop. It wasn’t quite to the drama of past Suzuka deciders, but the combination of on-track action and astute strategy typified the era. Hakkinen pressed on to the flag, but to no avail.

Behind there were adventures with both Wurz and Ralf Schumacher spinning into retirement, while mechanical problems put paid to both Prosts – as was typical – plus Verstappen’s Arrows, Frentzen’s Jordan and Gene in the Minardi.

In the fight for the other points placings, Coulthard had the edge on Barrichello throughout the race, with the pair finishing as they qualified and the remaining points going to Button in fifth ahead of Villeneuve in the BAR.

Schumacher’s eighth victory of the season sealed his third world title, and his first for Ferrari. Outgoing champion Hakkinen was appreciably gracious in defat and his post-race remarks about his rival, though given some of the mechanical woes he was surely left pondering what might have been.

Meanwhile celebrations were fully underway at Ferrari. President Luca di Montezemolo declared Schumacher’s victory ‘the most beautiful day of my life’ – given di Montezemolo had got married earlier in the year (July 7th), one can only imagine how glacial the reception was on his return home.

The season was not yet over: There was still one race left to run in Malaysia and a constructors championship still up for grabs, with Ferrari 13 points ahead of their rivals. That mattered far less to them, however, than Schumacher’s triumph, which ended their 21-year run without a drivers champion.