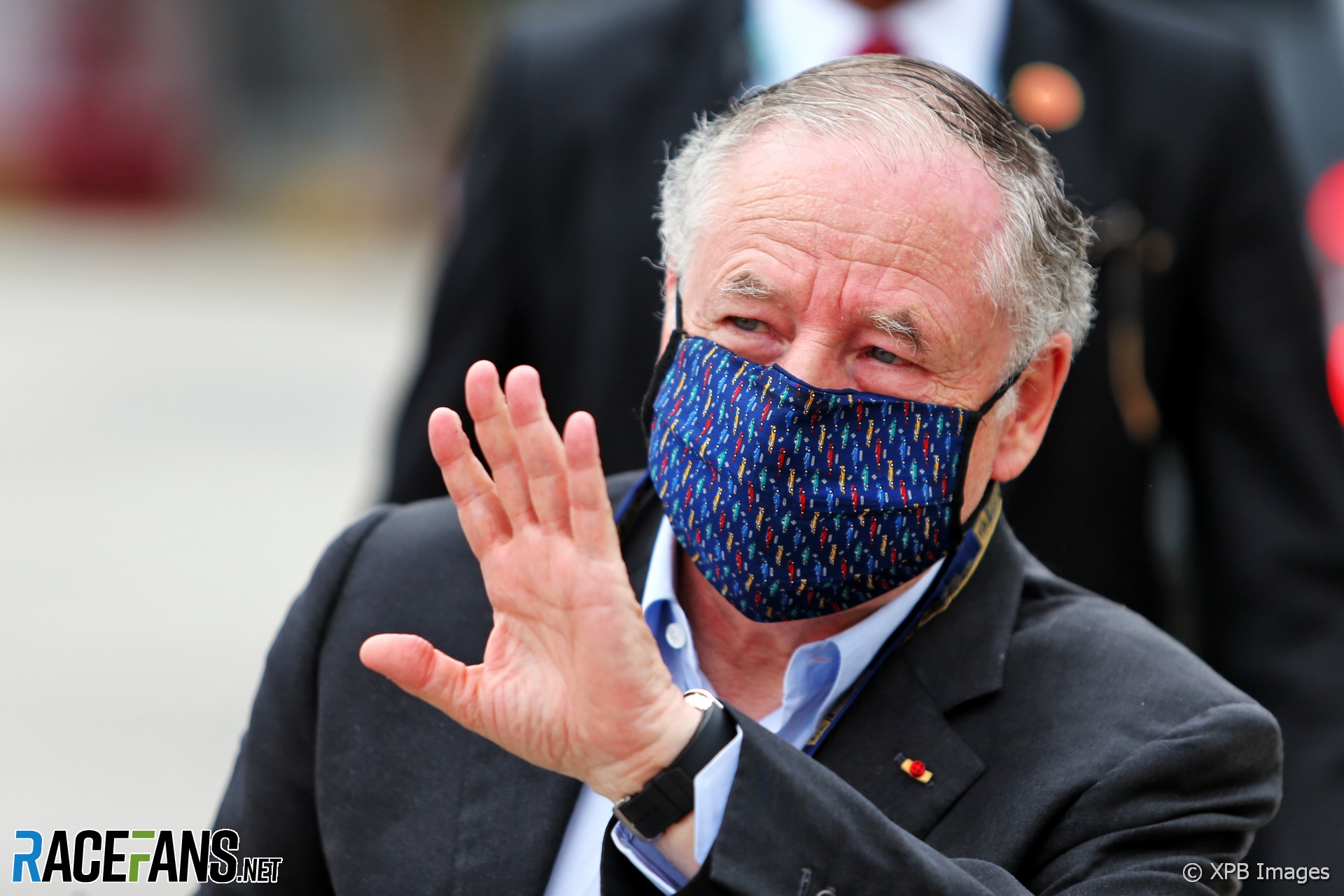 FIFA, FINA, FIS, FIE, FIG… there is hardly a letter (or even two) that does not embellish the contraction of ‘FI’, which in this context denotes ‘Federation International’ – usually some international sporting body or other. To fans of car racing the crucial third letter is an ‘A’.

What, though, sets apart the Federation Internationale de l’Automobile – and its two-wheel counterpart FIM – from the balance of ‘FI’ organisations is that the FIA (established 1904) is not purely a sporting authority, but represents the full spectrum of four- (or two-) wheel activities across the globe, be these sporting, touring, mobility, safety or legislative input.

The FIA’s functions and activities are best equated to the IAAF being called upon to sanction and regulate not only all global track and field sports, but also to actively govern the activities of hikers, mountaineers, casual strollers and dog walkers across the world and even provide input into pedestrian legislation. That would merely mark the start of the comparison.

While motorsport undeniably constitutes the FIA’s most visible portfolio, these activities make up but a minor percentage of the body’s overall activities, which include the global promotion and co-ordination of over 250 motoring organisations (think your local motor club or national motoring body, as these may not be the same entity) situated in 139 countries, all with diverse laws, customs and cultures.

The FIA administers its own global championships (F1, FE, WRC, WEC, WRX and Intercontinental Drifting Championships), and sanctions regional series all while fostering the worldwide development of the full motorsport spectrum. Thus, should a Dane wish to drift a Datsun in the Dominican Republic, FIA licensing and sanctioning procedures ensure global administrative and safety standards are followed.

By contrast, FIFA is all about its football world cup competitions held every four years – club and school leagues are largely off its radar – while FINA focuses primarily upon five aquatic disciplines. The International Olympic Committee alternates between summer and winter games held two years apart, and that is it.

The FIA’s halo series is, of course, the Formula 1 world championship – the FIA effectively owns the series and leases (only) the commercial rights to Liberty Media. Yet, as related above, F1 makes up a fraction of the body’s overall responsibilities despite being statistically the world’s largest continuous sporting block. This ‘fraction’ equates to around 5% dependent upon metric, although, to the world at large, the FIA is F1.

The presidency of the FIA is an elected position, with incumbents usually – but not always – drawn from the global membership. Thus, a president could as easily be a motorsport disciple as a mobility administrator or even rank outsider, as current president Jean Todt was. Terms of office run for four years, with bearers permitted to serve no more than three terms – consecutive or not – nor be older than 75 on election day.

This was not always the case. When Todt – former rally champion co-driver, Peugeot Motorsport director and the man who led Ferrari to serial successes with Michael Schumacher – assumed the presidency in 2009 he immediately ordered a root-and-branch review of all FIA statutes, and introduced those age and term limits.

With the Frenchman not only reaching his three-quarter century in February, but nearing the end of his third term – having been re-elected in 2013 and 2017 – he is scuppered by his own statuary review, assuming, that is, he wished to stand again. Asked by RaceFans May last year – at the height of uncertainty caused by Covid – whether he would consider an extension to his mandate to ensure a smooth transition at a later stage, Todt was guarded.

“Honestly, it’s not something I was planning at all. I must confess I was not either planning this Covid-19,” he said, adding, “It’s not a priority.” However, he stressed he would only consider a limited extension if it was requested by the FIA’s general assembly. Sources close to Todt have since told RaceFans that he is adamant he will step aside in December.

The FIA general assembly comprises fully paid-up member clubs – whether motorsport, touring or both – all of which hold votes. Thus, a caravan association has as much input into the FIA’s future as does a motorsport club, while Liberty Media and the commercial rights holders of other FIA series have no sway over the voting process. Nor, for that matter, do F1 teams and drivers, sponsors and partners, or fans at large.

In addition, presidential candidates are required to present a ‘slate’ nominating a president of the senate (which supervises FIA finances and management), a deputy president for mobility/tourism, a deputy president for sport, plus seven vice-presidents for sport. This VP septuplet needs to be drawn, one each, from the Middle East, Africa, North America, and South America/Asia-Pacific, plus two from Europe.

Thus far only Emerati Mohammed ben Sulayem has announced his candidacy, under the campaign slogan ‘FIA for Members’.

“We will take our time on policy formation to ensure it is developed in the most inclusive and democratic way. We will do this by seeking the advice of our members via a process of open consultation,” his website states.

Ben Sulayem is the president of a local ACN (ATCUAE), former regional rally champion, one of seven FIA vice-presidents for sport and chairman of the Arab Council of Touring and Automobile Clubs. He nominated Carmelo Sanz de Barros, chairman of the Spanish ASN RACE, as senate president, Tim Shearman as deputy president for mobility, and world champion rally co-driver Robert Reid as the sporting equivalent.

They are not expected to be the only candidates. Britain’s Graham Stoker – Todt’s long-serving deputy president for sport – is likely to throw his campaigning hat into the ring, while Motorsport UK chairman David Richards, the former world champion co-driver who draws on a raft of rally and F1 experience as chairman of Prodrive, is another potential presidential candidate. There may be one or even two more, although gender diversity seems lacking.

With the prize of most powerful person in the world of motoring in all its forms at stake, vicious campaigning is expected through to mid-December – the first such electoral skirmish since the 2009 elections, when Todt faced Ari Vatanen, 1981 world rally champion. Todt, who enjoyed the support of predecessor Max Mosley, beat his former Peugeot rally charge by 135 votes to 49.

In 2013 road safety advocate and former director-general of the FIA Foundation (a charity created from the proceeds of the sale of F1’s commercial rights) David Ward, announced his candidacy but withdrew after failing to secure sufficient support. Four years later Todt was returned unopposed – a sign of the unity he established in what was once a fragmented body. The word is that ben Sulayem considered standing, then thought better of taking on Todt…

The world of motoring faces unprecedented change – socially, culturally, technologically and environmentally, whether at mobility or sporting levels. It would be no exaggeration to claim that the future of the FIA hangs in the balance unless a visionary leader assumes the wheel from Todt and steers the 117-year-old organisation through the choppy roads that evidently lie ahead.

That is no reflection on Todt’s presidency – quite the opposite, in fact – but rather an indicator of how fast the world changed over the past five years, let alone 12. Who would have thought that when he first walked through the door of 8 Place de la Concorde, 75008 Paris that an electric world series would attract Audi, BMW, Mercedes and Porsche? Or that e-sports would be sanctioned by the FIA? Or the halo?

There are no doubts that the FIA president sets the direction for motorsport – the impetus for Formula E came from Todt – while it was he who saw off teams, fans and drivers in his determination to introduce halo, a battle that was vindicated in a split-second in Bahrain last November. Before him Mosley pushed for the introduction of grooved tyres on safety grounds, while the basics of F1’s current hybrid engines were formulated during his watch.

Who knows now what global circumstances will face the next president: A total ban on all forms of carbon fuels, whether fossil or synthetic? Could hydrogen power the world within five years? Will autonomous cars spawn some form of robot racing, will such competitions fall under the FIA’s remit or be governed by some or other algorithmic association? All these challenges – and many more – are expected to face the next FIA president.

Diversity, women in motorsport, development of grassroots motorsport, rationalisation of championship, series and championship ladders, budget caps and cost saving all these (and more) were tackled under Todt. Like the initiatives or not, his influence over global motorsport is undeniable, as was that of his predecessors and as will be that of his successors. How will a future president see F1? As premier championship, or will he favour FE or WEC?

Then there are more prosaic considerations: Will the current structure of the FIA prove fit for purpose during the next four years? How will the president balance the books while ensuring the FIA best serves its member clubs? Will funding flow equitably to both motorsport and mobility projects? Will safety – road and track – enjoy the same priority as it did under Mosley and Todt, or will the next incumbent focus on other factors, such as mobility?

Will ben Sulayem move the FIA from Paris to the Middle East should he be elected, a decision that could conceivably be justified on the basis of the region’s location, but certainly not historically? Will any British president shift headquarters to London – as Mosley is said to have planned before deciding to base himself largely in Monaco? All unknown factors, yet crucial to the FIA’s future; even more so should a non-motorsport figure gets the nod.

One hopes for the future of all motorsport that further candidates emerge, for only then will the General Assembly have a wider choice to exercise wisely. Is that a slight on ben Sulayem and his team’s candidacy? Not at all, for they have yet to play their cards – but it stands to reason that the greater the choice of candidates the better the outcome is likely to be, for only then can the right questions be asked, and, more to the point, be fully answered under pressure.

Mid-December therefore matters enormously to all who love or work in motorsport at whatever level and in whatever capacity. Yet, unlike traditional politics, rank and file folk have no say or sway over the process or who leads the FIA for the next four years, or even a dozen. That is unlikely to change – why should it – and thus the only hope for our readers is that the General Assembly recognises all the challenges facing motorsport, then votes accordingly.

28 comments on “Time for a revolution at the top of world motorsport? The race to replace Todt has started”