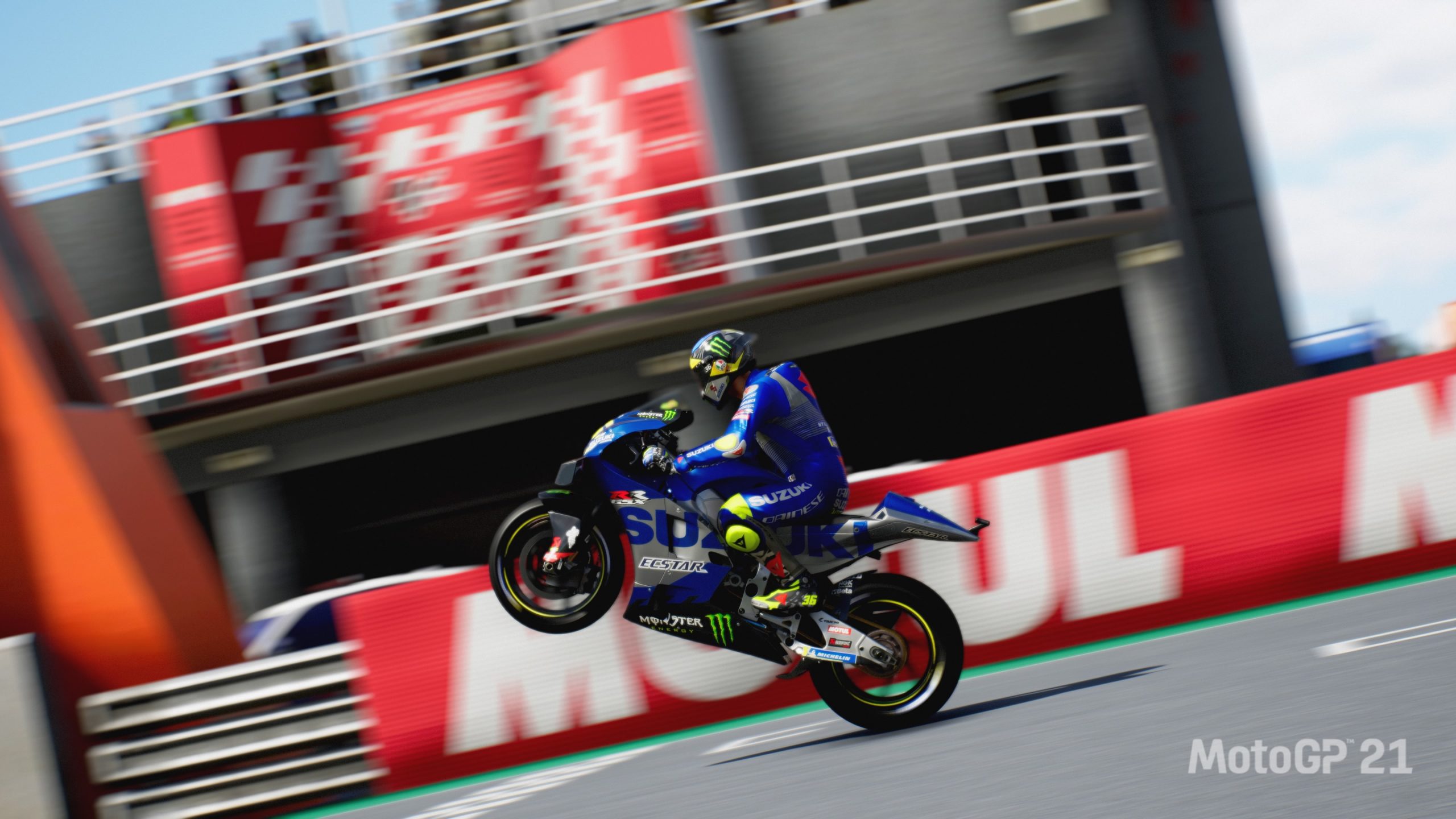 Following on from the most competitive and memorable seasons of racing for any top level motorsport, Moto GP is back for what will hopefully be a full calendar of racing in 2021.

With the launch of Moto GP 21, not only are Joan Mir, Marc Marquez, Valentino Rossi and the other riders back for another year of virtual racing, this year sees Milestone’s long-running franchise take the leap onto a new generation of console hardware.

But does the new version really offer enough to warrant a full-price purchase for Moto GP diehards and casual fans alike?

It may be a surprise to some, but Moto GP games have been around for as long as Formula 1 games have – stretching all the way back to the mid-80s.

Over the years, Italian developers Milestone have gradually refined their official Moto GP game franchise to offer, arguably, the best virtual representation of motorcycling’s elite competition the sport has ever had.

Riding 200bhp-plus beasts at IndyCar-rivalling top speeds with only your hands and gravity to keep you in the saddle is a terrifyingly difficult challenge and Moto GP 21 is not shy about reflecting that in its gameplay.

This is a challenging racing game – especially if you’re used to the relative simplicity of four-wheeled handling. While not a full ‘hardcore’ simulation, Moto GP 21 offers an authentic racing experience on parallel to what Codemasters offer with their official F1 franchise. Luckily, a brand-new tutorial mode will help bring newcomers up to speed on all aspects of motorcycle racing.

You can feel the weight of the bikes transfer believably as you ride through fast sweepers like Maggotts and Becketts or in the first sector of the Circuit of the Americas. The game offers a fantastic sense of where the grip limits are, as you can tell exactly how much the bike is straining to cling onto the asphalt whenever you dive too deep into a tight turn. Whenever you do crash – and you will crash – it never feels canned or unnatural, but a fair punishment for going over the limits.

And when you’re lying in the gravel this year, you’ll have the option to manually control your rider and run to your bike for recovery, rather than automatically respawn back on the track.

Even compared to last year’s game, the bikes feel noticeably livelier in 2021. It’s now easier to get them sliding under braking and unsettled over even minor bumps around the course. Even the low-powered, relatively tame Moto 3 class machines are significantly less forgiving than in last year’s game, but still feel like child’s play compared to the savagery of the Moto GP prototypes.

There are authentic riding aids to make life easier, like traction control and the anti-wheelie system, which you can adjust at any point, with a healthy amount of additional options that allow you to make riding as simple or as nuanced as you like.

The addition of the new Long Lap Penalty system means that if you jump the start, ram off rivals or exceed track limits once too often, you’ll have to take a rallycross joker-style excursion to clear the penalty, likely dropping you down the field.

As with so many modern racing games, the main meat of Moto GP 21 lies in its extensive career mode. You have free choice of starting in either the Moto3, Moto2 or Moto GP categories, with the ability to seek out contracts with real life teams as you progress up the ranks, or choose to ride for original start-up teams whose liveries can be edited to your liking.

Whichever category you’re racing in, research and development is a big part of your success. The development programmes you run in practice session on race weekends to earn development points have been noticeably improved for this new edition. No longer are you forced to run the same three monotonous programmes every race weekend. Instead, you are challenged to complete a wider range of smaller challenges, such as hitting a certain top speed at the speed trap, completing all three practice sessions without crashing or completing a sector in a minimum time.

The beauty of this is that these targets can be hit entirely at your leisure – meaning you can concentrate on acclimating yourself to the circuit or fiddling with your setup and just checking off the targets as you go, rather than being forced to run a five lap stint every race weekend to earn development points.

You have the option of running the original calendar for 2021 as planned – with COTA and Argentina included – or run the actual real life calendar instead, with the opening double header at the Losail circuit in Qatar.

Race in Moto 2 or Moto GP, and you’ll have the ability to set up your own junior team in the lower categories – a feature that is unlocked from the start of the career mode this time around. The staff management can be a little unintuitive at first, but once you get your head around how the various aspects affect your team’s synergy, you’ll realise it’s a lot easier than it first looks. The

The only real downside is that it is fundamentally the same mode as in Moto GP 20. So if you’ve invested hours in your career mode in Moto GP 20, you’ll be in for an almost identical experience in this latest release. While it’s not the best implementation of career mode you’ll ever play in a racing game, it offers far greater depth, immersion and replay-ability than just running a standard championship with your own named rider.

With Moto GP heralded for the quality of its racing, Moto GP does a truly commendable job of recreating the thrills of the world championship in a virtual format. Races believably ebb and flow as tyre wear takes its toll and riders on harder compounds become stronger in the later laps.

AI riders offer a formidable challenge. They are not afraid to use the space available on the track and will run as close as they dare to your bike into corners without giving way. It’s incredibly satisfying to let an AI rival dive up the inside, before taking back your position with a better exit out of the turn.

Moto 3 races unfold with riders in a single large swarm, just like the real thing. Just like in the real sport, it’s preferential to be behind exiting the final corners of Qatar and Mugello as you slipstream rivals ahead to slingshot over the line first.

Presentation wise, Moto GP 21 does a very impressive job of providing that authentic Moto GP experience both on the track and off. The TV broadcast graphics are used to great effect, making every race feel like you’re participating in a live Moto GP race on your TV. BT Sport commentator Gavin Emmitt is in the booth this year to provide pre and post-race commentary, but it’s a little disappointing to hear that he has been handed the exact same script previously given to Keith Huewen, with many lines recycled directly from previous games.

Once again, Moto GP 21 offers a comprehensive customisation suite, allowing you to fully edit your helmet design, personalised rider number design and signature nickname sticker. While the powerful editing tool allows you to make detailed designs far beyond what F1 2020 allows, it can be a little difficult if you’re not already experienced with layer based visual design software like Photoshop. Thankfully, you can download player made creations if you want using the online functionality. Disappointingly, you’re still only able to choose from limited bike liveries and select three different colours, rather than completely customise bikes to your liking.

As the first Moto GP game to be released on the new PlayStation 5 and Xbox Series X/S consoles, you can expect to see some marked presentation improvements over previous-gen machines. However, as the game still uses the Unreal 4 Engine as its predecessors, it’s not the giant leap many might be hoping for, even if they have wrung a lot from the platform. But running at a smooth framerate at 4K resolution, this is a visually appealing racing game, with none of the irritating micro stutters that were present last year.

Perhaps the biggest improvement comes in the loading times thanks to the new SSD hardware in the next-generation consoles. While it would take 45 seconds to load a Moto GP race at Aragon on PS4, doing the same on PS5 now takes just seven seconds.

The haptic feedback on the DualSense controller on PS5 also helps when handling these powerful machines on the limit, as the increased resistance of the triggers makes it easier to judge just how hard you’re braking or accelerating and make the minor adjustments to avoid being thrown off your bike.

Historic content returns for Moto GP 21, but instead of being locked behind an unnecessary, free-to-play mobile game-esque mini mode, all riders and bikes from all three historic eras can be raced in single player from the very beginning of the game. Donington Park and Laguna Seca return as additional historic tracks, joined now by the Brno circuit that has fallen off this year’s Moto GP calendar.

While Milestone have yet again produced a very rewarding, challenging and skilfully crafted racing game, there are just the minor details that prevent Moto GP 21 from being truly excellent.

At launch, the game features all riders and bikes from this year’s three major categories, but only the Moto GP riders have their portraits and rider numbers included at the time of writing. As they so often do, Milestone will add the Moto E and Red Bull Rookies rosters to the game as a free update later in the year.

There are a couple of AI quirks, with the computer riders sometimes following each other over sausage kerbs and all falling over like bowling pins, or bikes on out-laps refusing to look behind them and let you by when on a qualifying hot-lap.

Smaller details like having to fast forward through 17 laps of replay just to see that photo finish, or having to complete a full lap just to complete a tutorial over manual race starts would go a long way to make this a more polished overall package.

In the end, Moto GP 21 is a solid racing game that offers both hardcore fans of the sport and wider racing enthusiasts a very enjoyable time. With so many similarities to last year’s game, it’s difficult to recommend this as a must-buy to Moto GP 20 owners. But if you’re looking for a quality racing game for your next-generation console to help tide you over until F1 2021 appears, you cannot go wrong with Moto GP 21.