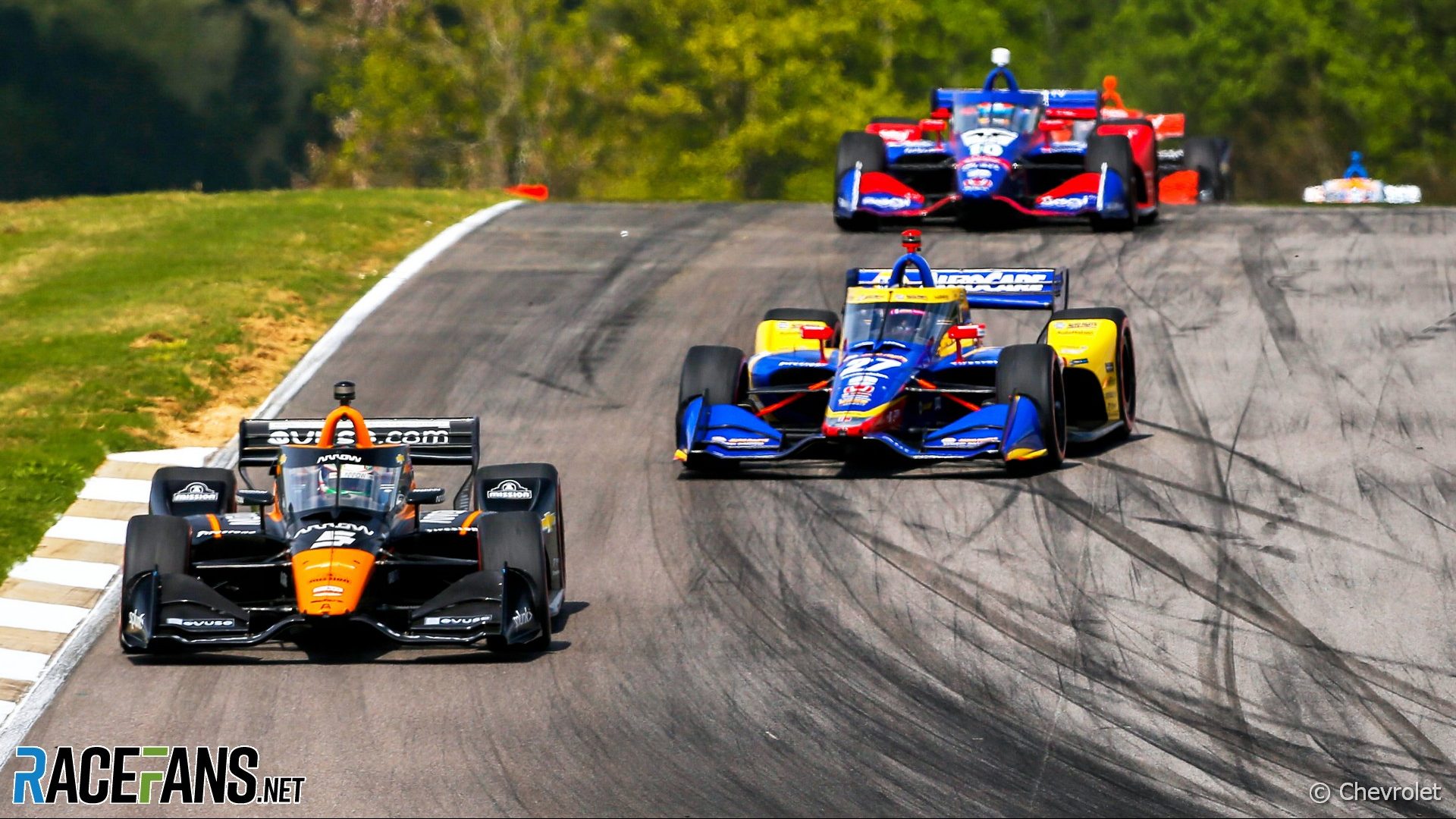 Given the domination that Mercedes and Red Bull Racing currently exert over Formula 1, a podium scored outside of those four cars is pretty special. True, the Emilia Romagna Grand Prix was disrupted by a red flag after a heavy crash involving a Mercedes while the second blue car suffered a litany of incidents, but still Lando Norris’s McLaren had to beat 17 other cars to finish in the top three come 5:00pm CET last Sunday.

It was 11:00am in Alabama when McLaren Racing CEO Zak Brown quietly celebrated the F1 team’s latest success, but the Californian’s successful weekend began on Saturday morning when a United Autosports McLaren GT4 won at Monza – it would repeat the feat 24 hours later – and the Walkinshaw Andretti United Holden of Chaz Mostert blitzed the Supercar field in Tasmania on what was then Saturday evening for Brown.

Nor was that end of it for the weekend: Pato O’Ward, driving the Arrow McLaren SP IndyCar entry at Barber Motorsports Park in Alabama, claimed pole position – the young Mexican finished fourth in the race – while in Barcelona a United Autosports Oreca LMP2 piloted by a trio of youngsters completed Brown’s fifth podium of a remarkable weekend: one each in F1, Supercars and ELMS, two in GT4 plus an IndyCar pole.

Yet, it was all in a single weekend’s work for Zakary Challen Brown. True, McLaren has yet to win a grand prix during his tenure while the Indianapolis 500 remains elusive, but, given that he switched from sponsor search to F1 team boss just four years ago and heads for his 50th birthday in November, there is time enough ahead to achieve even greater successes in the sport he has loved since childhood with unbridled passion.

As though the weekend schedule outlined above was not enough, the day after our interview – on Friday evening well after close of business – he was off to Lonato, Italy to watch McLaren’s latest young driver signing Ugo Ugochukwu, the US-born son of Nigerian supermodel Oluchi Onweagba-Orlandi and her Italian fashion mogul husband Luca Orlandi, race karts in the CIK European Championships. Another podium…

United, which dubs itself ‘The UK’s fastest growing racing team’, is now a multi-disciplinary operation founded in 2009 by Brown and Richard Dean. They met during the early nineties when Dean instructed Brown at a race school after he moved to England to compete in junior categories. Tuition over, they became firm friends, with Brown at times boarding with Dean’s family. United was born as a hobby racer vehicle.

Realising he would never make it to F1 as driver, Brown switched to sponsorship marketing in the mid-nineties, lucratively selling his JMI agency and taking on the challenge of rebuilding a floundering McLaren in 2016. The proceeds enabled him to acquire a stable of 50 cars, split around 35/15 between historic race cars and delectable road machinery. Apart from his race team duties he finds time to play at historic events.

That’s an awful lot of plates, each of different weights, diameters and colours, to keep spinning up in the air without the whole crockery service crashing into 1,000 shards. How does he manage to keep track of, let alone set directions for, so many disparate programmes?

“Each racing series has its different business models [to understand]. That’s what it takes to be a successful racing team in any series.”

He stresses, though, that first priority is his day job at McLaren, adding, “When you’re technically not running a team, my presence at a race weekend is sponsor relations, industry relations, representing the brand. It’s not calling the race; it’s not running the race.

“Unfortunately, we don’t have partners coming to the track [at the moment]. My contribution in Imola was to be dialled into the pit wall via my laptop and have direct communications to [F1 team principal] Andreas [Seidl]. Other than not being on the ground, my contribution in Imola was not radically different from being in direct communication with Andreas via WhatsApp, which is how we communicate on the pit wall.”

He has not, Brown says, visited Australia for a Supercar race in 18 months, but adds, “I am on a 10pm weekly management call to Australia, with Michael Andretti, Richard, Ryan Walkinshaw and (team principal) Bruce Stewart, making sure they have what they need to be successful – and they went and won last weekend.

“We also won our debut GT4 races in Italy, and Richard wasn’t there; we had the [simultaneous] ELMS race in Spain. Richard has the same philosophy: we’ve got good equipment, great drivers, great leadership, commercially the team is strong.

“I go to the race shop once a month to sit down and go through budgets and check in, but Richard runs that racing team. ‘Soup to Nuts’.”

Clearly last week Brown faced some critical time management choices, but “ultimately chose Barber over Imola as it was the first race of the [IndyCar] year, we have a big new partnership with BAT [in common with the F1 team], new drivers. I observe a lot when I’m in a race weekend.

“I believe I contribute more post-race when I share my observations; I know what great looks like, I know what bad looks like; and I know what good looks like. My job is to help steer the ship, but you can in [this] day and age do that remotely,” stressing for the avoidance of doubt, “If there’s ever a scenario where I need to choose between something, 110% of the time it’s McLaren.”

Brown believes firmly that his non-McLaren interests have positively benefitted his day job. For example, he observed the highly successful former Porsche WEC team boss Seidl in operation at close quarters at Le Mans, then persuaded him to decamp to McLaren, while he took note of Lando Norris in F3 during a British Touring Car round he visited with Dean. Mechanics have, for example, moved from United to McLaren.

The MSP investment deal announced last year came via contacts Brown had networked while racing in historics. “So, it’s not a coincidence. That was a direct relationship.” He makes the point that during such events he has a dual role: having fun with his cars while glad-handing high-rollers, particularly potential sponsors and McLaren owners.

His McLaren bosses, comprising chairman Paul Walsh – whom Brown has known for many years via Johnnie Walker sponsorship deals sealed when Walsh ran alcohol company Diageo – plus Saudi and Bahraini shareholders are, says Brown, totally supportive of his extra-mural activities, having seen him in action.

“They know I’m 24/7 and have been for 25 years now,” he says, adding he has installed ‘firewalls’ around the various activities to prevent conflicts of interest.

At the core of Brown’s management style lies the art of delegation and empowerment, obviously with the correct support and facilities.

What, though, does he mean by ‘can’t do’? Is it a question of time, skill sets, maybe aptitude?

“Primarily skill set. If you’re going to run a team, then you got to be at all 23 races, full stop. Even if I did have the time, I come from a commercial marketing driver background, I don’t come from a technical background. If I sat in a meeting with (McLaren technical director) James Key and started giving any advice, we’d go backwards, quickly.”

Thus, Brown has established and instilled huge levels of trust in and with his key lieutenants.

“The trust I’ve got between myself and [all of them], it’s awesome. I think as a leader you need to understand what their needs are, and be a really strong communicator, hire the best people, it has to be an attractive proposition. All of the people that work with me, first and foremost, are racers who want to have confidence that they’re going to have the tools and resources and support to do what they need to do to win.

“You need to give them good competitive packages, just like a grand prix driver, the good people cost money. You can’t be afraid to spend money, you kind of get what you pay for in this world. You need to build up a huge amount of trust and then you’ve got to give them a freedom – you’ve hired them to do a job, you can’t then be micromanaging them.”

With such levels of trust and disparate interests spread across a minimum of three continents – and more when the various categories stray outside of their respective heartlands – how many races will Brown attend ‘live’ this year?

“I’m scheduled to go to 16 Formula 1 races, four IndyCar races, I’ll do one GT4 race, I will do one, maybe two, ELMS races,” he says without hesitation.

There is more: “I’ll do Le Mans which doesn’t conflict [with F1]. I went to a Formula E race in Saudi because [McLaren] are looking at that. I went to one Extreme E race and probably go to one other and then this weekend I’m at a kart race.” That’s 28 weekends out of 52, with the Extreme E team he co-owns with Michael Andretti likely to boost this tally in coming years as the series expands.

“I think the big difference with me and maybe some others is I will go to 16 F1 races, maybe that’s what Mattia [Binotto, Ferrari team boss] is doing this year, but I decided on my off weekends to go to more racetracks as opposed to football matches.” Huge grin.

The schedule does not, though, include his own racing programme, which annually takes in (at least) the Monterey historic festival, “Because it’s always during the Formula 1 summer shutdown and they have set classes. I’m most often there in my [1974 Touring Car Ford ‘Cologne’] Capri, Porsche 935 and a Formula 1 car, plus my Porsche 962 and [TransAm] Audi 200. Those are kind of the regular classes.

“Then this year, I’ll also be doing Estoril in October with Martin Brundle in my Jaguar XJR-10 and the Capri, like I did with Dario [Franchitti] last year.”

The contents page of Brown’s race car anthology details some of his collection. But a second edition must be due soon given the rate at which his garage is expanding. A further book listing his road car collection has also now been published. His lists his five favourite road cars as the McLaren P1, Ferrari 288 GTO, Porsche 959, McLaren Speedtail and Cobra 289.

“I’ve always had an addiction to cars,” he says. “I used to collect model cars. I’ve just gotten the bigger versions now.” He grins widely after I remark that the major difference between men and boys is the size of their toys.

That’s Zak Brown – a true racer at heart who lives the dream 24/7 and has done so for three decades now. Last weekend was very special for the wider McLaren-United constellation, yet it was not a full-house: O’Ward placed fourth and thus missed the podium.

“It was a great weekend in that not only did every team I was involved in racing – short of Extreme E – ended up on the podium other than the IndyCar team, which started on pole and came in close. I gave Taylor grief [because] he broke my streak,” Brown says with a steely smile.

The implication is clear: nothing short of a full house of podiums will do next time, with Brown-run driver on the top step of the podium in all categories. Don’t bet against it happening sometime soon, Mercedes and Red Bull notwithstanding.