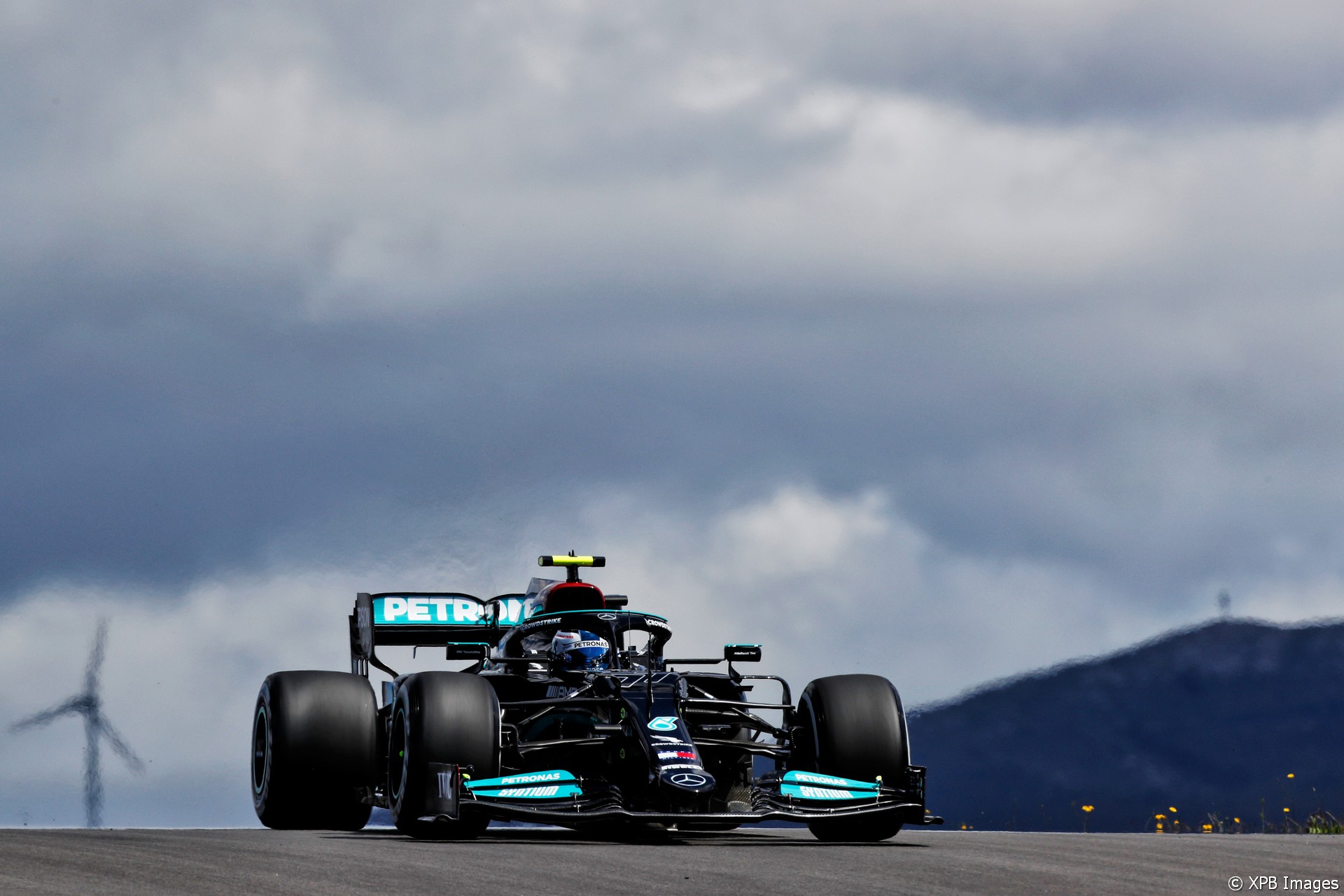 Bottas will line up ahead of Mercedes team mate Lewis Hamilton and the two Red Bulls of Verstappen and Sergio Perez after an anti-climatic end to qualifying with none of the top drivers able to improve on their final runs.

Verstappen’s first flying lap would have been fast enough to see him take the top spot, but his best lap would be deleted for exceeding track limits on the exit of turn four after a snap of oversteer.

Carlos Sainz Jnr will start fifth for Ferrari, ahead of Esteban Ocon and Lando Norris.

The skies were clear and sunny over the Autodromo do Algarve as the circuit played host to a Formula 1 qualifying session for only the second time ever.

Wind speed had crept up to 15km/h as the cars ventured out onto the circuit.

Lando Norris’s first lap on the medium tyre was compromised by the Haas of Mick Schumacher as the pair rounded turn three, but it was not enough on an impediment to warrant an investigation from the stewards

Hamilton was the early pace setter, but his time of 1’18.726 was deleted for exceeding track limits at the fast first corner. It proved only a minor blip for the world champion, who was able to follow up with a legitimate lap immediately after.

Sergio Perez went faster than Red Bull team mate Max Verstappen after their early runs, but Perez found himself in trouble after spinning on the exit of turn four and having to slowly crawl out of the gravel.

With time ticking down, Lando Norris briefly jumped to the top of the times, while McLaren team mate Daniel Ricciardo was on the bubble in 15th. As the chequered flag flew, Ricciardo was unable to improve his time, leaving him vulnerable to Esteban Ocon, who duly eliminated Ricciardo from the session, much to the Australian’s frustration.

Nicholas Latifi was also knocked out in 18th, with the Haas pair of Mick Schumacher and Nikita Mazepin resigned to the back row of the grid.

Mazepin was briefly held up by Latifi at the end of his lap, the Williams driver complaining to his team that he hadn’t been warned about the Haas. Latifi then predicted Mazepin would spoil his start to the next lap, and was.

The medium tyres were the choice for most of the field as the second session began. Max Verstappen was the first to set a quick lap on the yellow-walled rubber, but his 1’19.099 was beaten comfortably by the two Mercedes and Red Bull team mate Sergio Perez.

Only Charles Leclerc opted to stick on the medium tyres for the final run of the session as the field took to the track for their final runs in Q2. His time of a 1’18.769 was ultimately faster than his Ferrari team mate on the softs by the time the chequered flag dropped.

Hamilton set the fastest time of the session, ahead of Mercedes team mate Valtteri Bottas, with Lando Norris repeating his strong pace in the McLaren by finishing the session third ahead of Esteban Ocon and the Red Bull of Verstappen.

Yuki Tsunoda could not improve by enough at the chequered flag and was eliminated in 14th, with Fernando Alonso also failing to make it through as team mate Ocon comfortably did.

The two Alfa Romeos of Antonio Giovinazzi and Kimi Raikkonen were also knocked out, with Raikkonen significantly slower than the rest of his rivals in 15th.

George Russell was within half a tenth of dragging his Williams into Q3 for the first time in his career, but had to settle for 11th on the grid after another impressive qualifying performance.

The final shootout for pole position looked to be another close-fought battle between Mercedes and Red Bull.

Max Verstappen’s first attempt was the quickest of the session, but his chances for pole were ruined when he had a snap of oversteer at the apex of the fast turn four, running wide and having his time deleted for exceeding track limits.

It was Bottas who sat on provisional pole after the first runs, with Hamilton only seven-thousandths of a second behind his Mercedes team mate with Verstappen third.

With the provisional pole time significantly slower than the ultimate pace Mercedes had shown in Q2, the world champions opted to send both cars out on medium tyres for their second and final run of the afternoon. Verstappen, meanwhile, chose to remain on the softs.

Verstappen was able to put in a legal lap time with his second effort, but he could only manage third place, almost four tenths of a second behind Bottas.

With Mercedes seemingly under no threat from the Red Bulls, the question became which of the team’s drivers would take pole. But with neither driver able to find any improvement, it was Bottas who secured pole position in a rather underwhelming climax to qualifying.

The two Red Bulls of Verstappen and Perez will line up behind the Mercedes, with Carlos Sainz the leading Ferrari in fifth.

Esteban Ocon will line up sixth in the Alpine, ahead of Lando Norris, Charles Leclerc and Pierre Gasly. Sebastian Vettel will round out the top ten for tomorrow’s Portuguese Grand Prix.