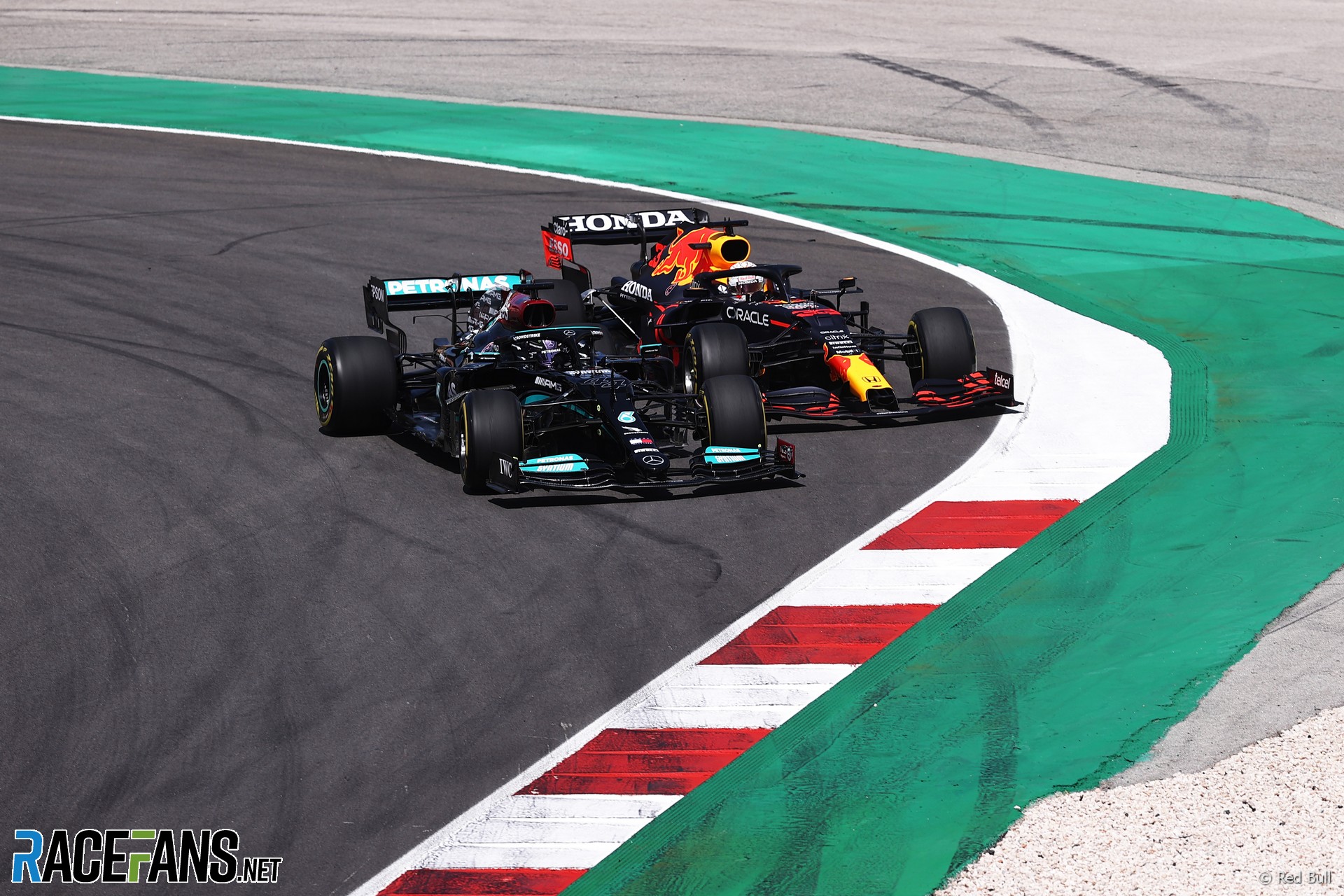 Lewis Hamilton won the Portuguese Grand Prix after passing both Max Verstappen and Valtteri Bottas on track in the early phase of the race to take the lead.

Hamilton was never troubled after taking the lead for the first time, leading Verstappen and Bottas home, with Sergio Perez finishing fourth in the second Red Bull.

Lando Norris took fifth for McLaren, ahead of Charles Leclerc’s Ferrari. The two Alpines of Esteban Ocon and Feranndo Alonso finished seventh and eighth, with Daniel Ricciardo in ninth and Pierre Gasly rounding out the points in tenth.

At the start, the top three on the grid of Bottas, Hamilton and Verstappen held their positions as the field navigated the opening lap.

Running down the pit straight for the first time, Kimi Raikkonen ran into the rear of his Alfa Romeo team mate Antonio Giovinazzi, dislodging his front wing and causing him to run off into the gravel and out of the race.

The Safety Car was deployed while the debris along the pit straight was cleared. As the race resumed on lap seven, Verstappen timed his jump to perfection and was able to pass Hamilton for second place. Perez lost fourth to Norris after the pair passed Carlos Sainz Jnr.

Despite losing second to Verstappen, Hamilton was able to catch the Red Bull and retake the position on lap 11. Having taken back second, Hamilton set his sights on the lead and was able to storm into the front of the field by sweeping around the outside of his Mercedes team mate into turn one on lap 20.

Verstappen was the first of the front runners to stop on lap 36, switching to hard tyres. Mercedes brought Bottas in from second place the very next lap for a fresh set of hards of his own, and was able to rejoin ahead of Verstappen. But with Verstappen’s tyres being more up to temperature, the Red Bull was able to put Bottas under immediate pressure and dived up the inside of turn five to take the position.

After Hamilton pitted from the lead, Perez led the race on a marathon first stint until lap 51, when Hamilton was able to eventually catch and easily pass the Red Bull – Perez finally stopping for softs a lap later.

In the final laps, both Verstappen and Bottas both opted to pit for fresh soft tyres to take fastest lap. Bottas was able to claim the fastest lap temporarily, until he was beaten by Verstappen on the final lap. That was, until the stewards deleted Verstappen’s time for exceeding track limits at turn 14.

Hamilton eventually took the chequered flag almost half a minute ahead of Verstappen, with Bottas four seconds further back.