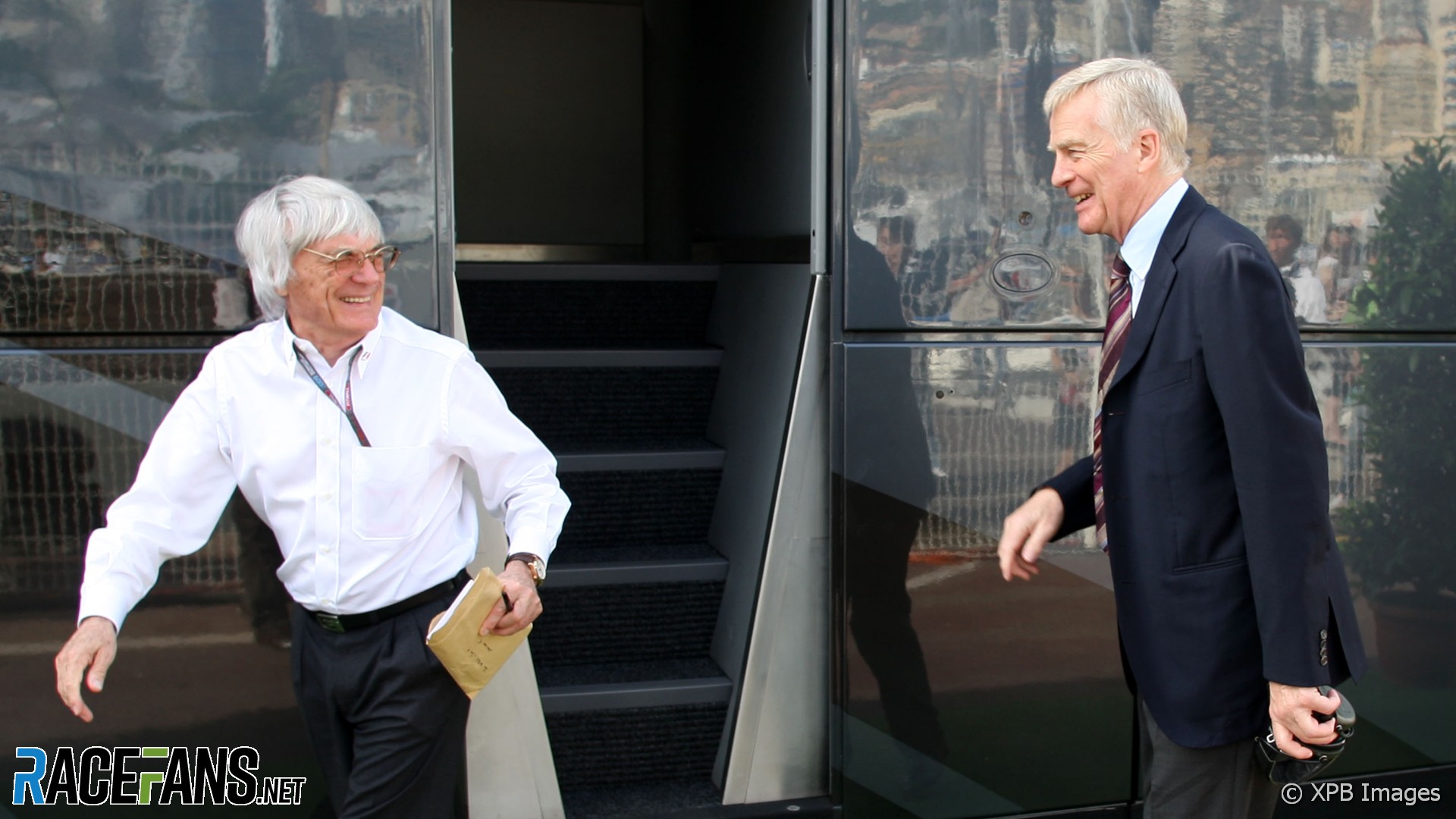 For years they were the duo who wielded ultimate power over the world’s most popular form of motorsport.

Bernie Ecclestone built his Formula 1 empire with the assistance of Max Mosley in the seventies and eighties. Over the decades that followed Mosley, as FIA president, shaped the sport in line with his and Ecclestone’s often shared vision.

Following the death of Mosley earlier this week, Ecclestone told RaceFans of his “millions” of shared memories of their time at the top of F1.

“We were a bit like brothers actually,” says Ecclestone, now 90, four years on from his departure from the sport. “We didn’t keep any secrets between us. Anything that had to be done or said, that’s what we carried on and did. It was a good relationship.”

Ecclestone’s acquisition of the rights to F1 began with his stewardship of the Formula 1 Constructors’ Association in the seventies. By the end of the decade, with Mosley acting as the group’s legal advisor, it had emerged as a threat to the authority of governing body FISA (now the FIA, known until 1978 as the CSI).

Over 40 years later, Ecclestone fondly remembers how he and Mosley laboured to undermine the authority of recently-installed FISA president Jean-Marie Balestre. At the first race of the 1979 season, Balestre levied a heavy £3,000 fine on McLaren John Watson for his role in a crash which caused the race to be red-flagged immediately after the start.

Balestre further insisted Watson would be forbidden from contesting the following round in Brazil unless the fine was paid. Ecclestone regarded his actions as “completely wrong” and, knowing he had the support of the race promoter to insist on Watson’s participation, he and Mosley tackled Balestre over the matter in a basement office at the Interlagos circuit in Brazil.

Ecclestone said one of his fondest memories of Mosley was how he ensured Balestre was left in no doubt about the limit of his power.

“Max and I insisted he wrote and apologised,” Ecclestone recalled. “Max made him write the apologies, obviously in French, and he must have written 20 apologies. Every time he wrote one Max looked at it and he said ‘that’s not good enough’, we threw it away.

Nearly three decades later, Ecclestone’s grip on the sport was complete. Mosley, having succeeded Balestre as FIA president, sold Ecclestone the rights to Formula 1 on a 100-year lease.

Following Mosley’s ascent to the presidency in the early nineties and a succession of re-elections, both were at the peak of their powers. But when McLaren was found guilty of using intellectual property obtained from rivals Ferrari, Ecclestone believed Mosley pushed for too strong a punishment on a team which was competing for the world championship at the time.

“He wanted to chuck them out the championship for two years,” Ecclestone remembered. “I said to him, you can’t do that because if you chuck them out they’re gone forever. They’ll never come back. They can’t close down and suddenly open up again.”

The mutual antagonism between Mosley and McLaren’s team principal of the time, Ron Dennis, was well-known.

“I said to Max, you can’t chuck them out the championship, it’s silly to do that. They’re a bloody good team, well-organised, well-run. There’s nothing wrong with Ron – Max didn’t get on with him very well.”

Ecclestone talked Mosley into accepting a fine, a compromise the FIA president reluctantly agreed to.

“I said we ought to fine them whatever amount of money they would earn in the next two years. So I calculated that and I said fine them a 100 million.”

“When I presented it to the World Council Max supported and said that’s what we’ll do,” Ecclestone added. “So we fined them 100 million.”

The ‘Spygate’ saga was one in a series of explosive scandals during the final years of Mosley’s reign. Six months later he was featured in the infamous News of the World front page expose about his sexual habits.

Despite Mosley facing huge pressure to resign, Ecclestone did not immediately support his ally of many decades, a design he soon regretted and apologised for.

“I was really told by almost everyone ‘how can you have him, being in his position, acting like that?'” he explained. “And at the time I never agreed with the people at all, but I didn’t support Max.

“I only didn’t support him because there were so many people that said I should not be friends with him, all sorts of things. But then I apologised openly to the World Council of the FIA to explain to them that I wasn’t too happy that I hadn’t supported him.”

It was one of few serious disagreements between the pair, Ecclestone said. “If we ever disagreed on things, which used to happen, I would say to Max ‘I don’t agree with that, I don’t think that should happen’. Or the other way around: Max would say to me, well, I think better to have done that or whatever.

The pair mended their relationship and last spoke only a few days before Mosley’s death on Sunday. “He wasn’t in good shape,” said Ecclestone of their final talk.

“I used to feel bad about calling him to say, ‘how’s it going?’ I used to call him some times and say ‘have they mended you yet?’ because we had that sort of a sense of humour together.

“He knew what I felt about him. And he’d say, ‘No. But we’re trying something else now’.”