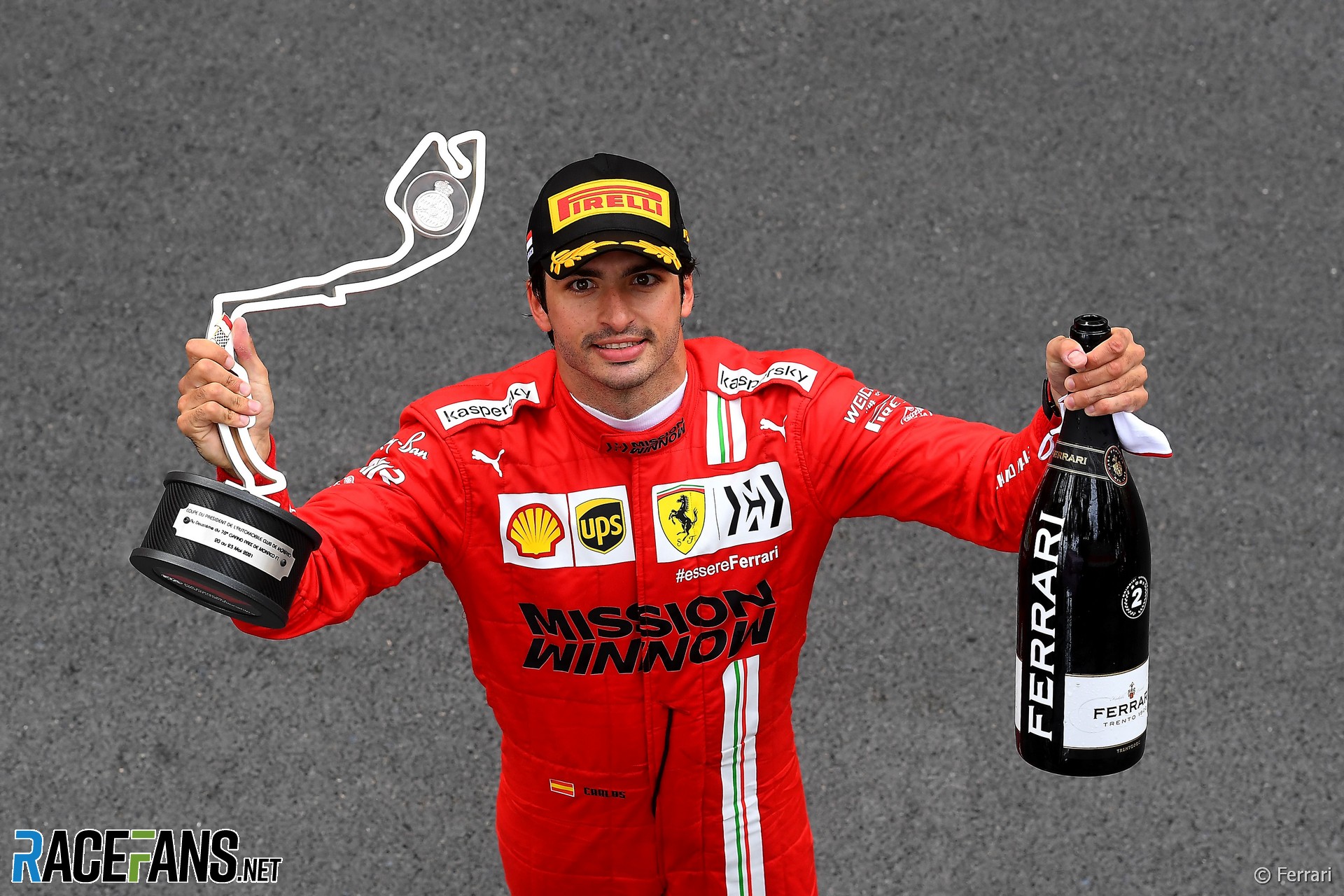 Sainz said Ferrari didn’t believe how competitive they would be in Monaco until after practice began.

“I think we were all were a bit surprised,” he said. “I think the whole paddock in general was a bit surprised that that the car was performing at that level. But once we saw on Thursday that it was genuine, we wanted to win.”

His team mate Charles Leclerc took pole position, but was unable to start due to undetected damage incurred in his qualifying crash. Sainz took fourth on the grid and finished second.

“It is with great sadness that I reflect on the passing of Max Mosley, aged 81,” said Williams. “Max had a profound impact on the wider world of motorsport, but on a personal level played an integral role in helping establish the foundations for the Williams team. He was a smart, talented man and his loss will be felt deeply by all those who knew him.

“I first met Max back in the 1960’s when he entered the world of motorsport as a driver. I prepared his car in Formula Two and, whilst he was never the quickest driver on the grid, he was always intelligent behind the wheel. After retiring from driving, I continued to work with Max through his March Engineering business, running customer cars in the early 1970’s under the Frank Williams Racing Cars banner. I would return to running a March chassis having founded Williams Grand Prix Engineering in 1977, with Patrick Nève taking the team’s first start at the Spanish Grand Prix that year.

“Max’s passing is particularly poignant for me given the role he played in the origins of Williams Racing, as the team celebrated its 750th Grand Prix last weekend in Monaco. It is fair to say that the team would not have achieved what it has achieved if it were not for the support Max gave in those early days, and I will forever be grateful to him for that.

“Despite his success as a chassis builder, Max’s political acumen was always clear and I had every confidence in the creation of The Formula One Constructors’ Association (FOCA) in 1974, with Max, myself, Bernie Ecclestone, Colin Chapman, Teddy Mayer, and Ken Tyrrell being founding members. This political skill led to Max having a profound impact on not only F1 but motorsport and road safety, in his role as president of the FIA.

“As a team owner, I had many dealings with him in this position and whilst we did not always see eye-to-eye on every issue, he was always willing to have a frank conversation and exchange of views. He led the sport into a new era during this period, one characterised by improved safety and technological innovation, and for that he will always be remembered fondly.

“My thoughts, and those of the Williams family, go out to his family and friends at this challenging time.”

Formula 1 reported almost half a million players entered the 2021 edition of its official Esports series. Over 494,000 entries were received, an increase of 108% compared to last year. The series will begin with a Pro Exhibition event tomorrow night.

Silverstone in an F1 car. What a day 😆 So ridiculously cool. I now have a newfound appreciation for downforce 😅 pic.twitter.com/HKKHyldx0B

The latest 2022 #Fit4F1 18-inch wet tyre test session is underway at @PaulRicardTrack in France, with @Charles_Leclerc driving for @ScuderiaFerrari. He is testing the intermediates this morning, before switching to full wets in the afternoon. Temperatures: 17 ambient and 23 track pic.twitter.com/yNA7iQnzoS

"I think most racing drivers would like an opportunity in Formula One if they can get it, but I think winning the IndyCar championship is equally challenging."

Power hangs on for wild ride onto last row (IndyCar)

"As someone on the outside looking in, there never should be guarantees at this racetrack because that’s what it’s built on. That’s something 100 years won’t change."

"While there is little room to amend the layout, there are some tweaks that could be made, including perhaps removing the chicane out of the tunnel."

"A road safety pioneer, leader and donor, Max Mosley’s legacy will continue to be seen and felt every day in the work of the FIA Foundation and other institutions he established, the motor sport safety reforms he led, and in the many thousands of deaths and serious injuries prevented through the road safety research and programmes he supported."

Should we have included Lewis Hamilton as a ‘struggler’ in yesterday’s Star Performers article? On reflection, given how far he was behind his team mate in qualifying, I’m inclined to agree with David:

Agree about Norris as a star driver but I’d put Sainz up there. They were the two drivers who most impressed me over the weekend. Vettel did well.

Hamilton struggled! That’s a definite inclusion as ‘struggler’ for qualifying. In the race, both Mercedes cars struggled but, even so, his general ‘let’s get this over with’ attitude didn’t help surely. It was the polar opposite of that ‘can do’ attitude at Imola when he got lucky with the red flag and un-lapping, but still had many places to make up to second.
@David-br

Happy birthday to Lustigson and Zazeems!