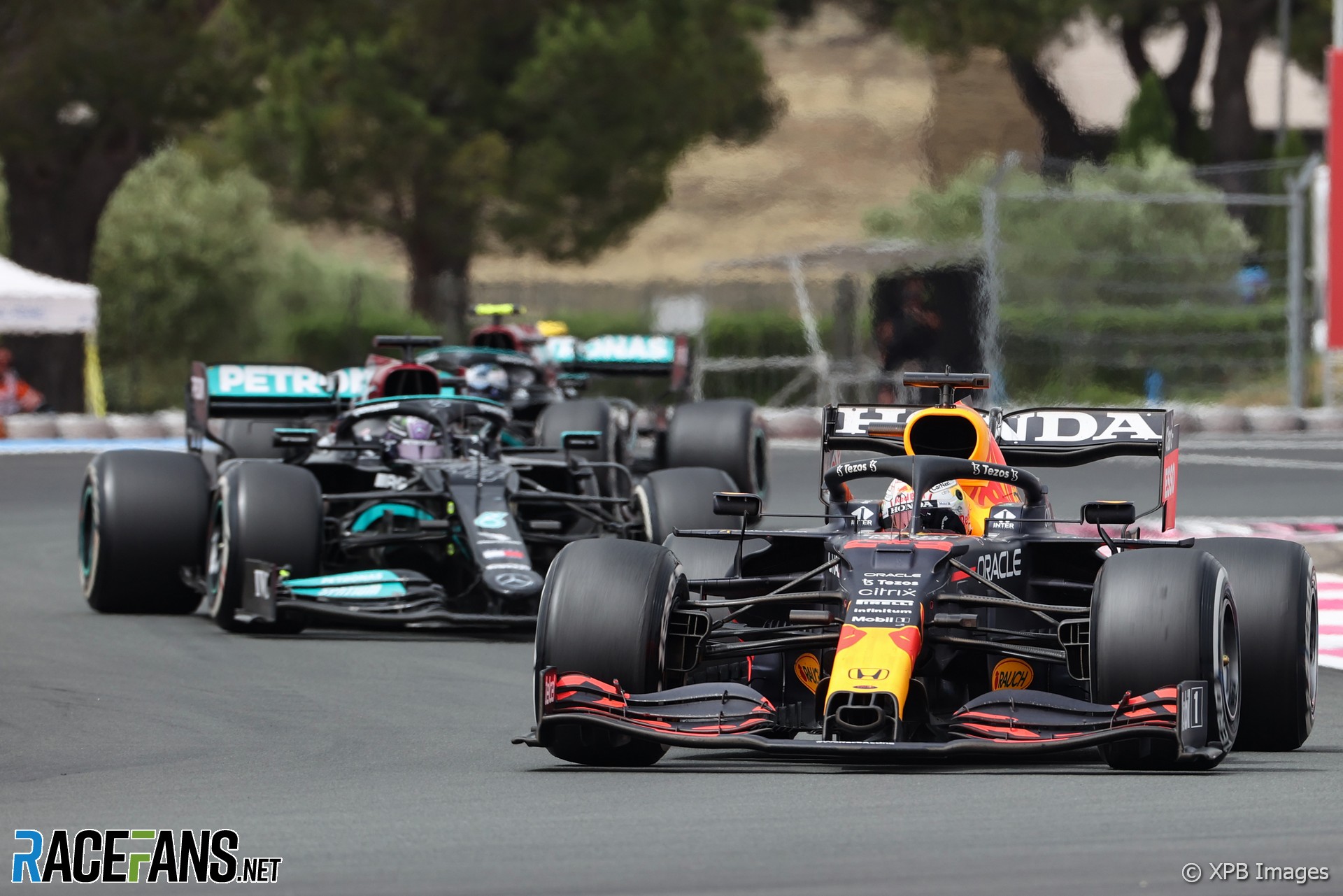 Red Bull’s superior straight-line speed helped Max Verstappen score his third win of the season, and could help the Austrian-owned them do the double on home ground starting this weekend.

Here are the talking points for the first of two consecutive races at the Red Bull Ring – the Styrian Grand Prix.

After three consecutive Red Bull victories in Monaco, Azerbaijan and now the French Grand Prix, it’s no longer purely Brackley hyperbole to say the RB16B is the car to beat in F1. Mercedes’ latest defeat left them stunned, but one shortcoming they can identify is a straight-line speed deficit to the Honda-powered Red Bull car.

Following the introduction of tough new tests to bar the ‘flexi-wings’ seen at previous rounds, Red Bull opted to use a trimmed-out set-up in France. The three lengthy straights at the Red Bull Ring offer the chance to reap the same advantage again. Mercedes chose not to strip downforce from their car last time out, but they may have no option this weekend.

Ferrari’s battle to be top of midfield

Ferrari’s pace at Monaco and Baku did not necessarily show where the team really is in the pecking order, as they were keen to point out at the time. Back-to-back pole positions were never likely to continue after F1 left the street circuits – but just how far the team fell at Paul Ricard, both Charles Leclerc and Carlos Sainz Jnr finishing outside the points, was dramatic.

By comparison, McLaren – who had seemed to struggle during Friday’s sessions and even during qualifying – were able to confidently claim ‘best of the rest’ in the race, with a fifth and sixth place finish.

Guillaume Dezoteux, AlphaTauri’s head of vehicle performance admitted he was “surprised” by the development. “Ferrari looked strong on Friday, especially on the long run pace,” he said. “They [also] looked pretty strong in quali – OK, Carlos was faster than us, but Leclerc was slower. So we felt in the short run we were a very similar pace. But in the long run we thought they would go faster than that.

“And the McLaren is the opposite. Actually, we were slightly faster than them in the short run and we were expecting a bit less from them in the long run. I think what we’ve seen is a ranking of how good people have been at managing the tyres and how severe the cars are on the tyres, because obviously you have limited possibilities in adapting just for the race, your tyre management strategies. So McLaren have done a better job, as simple as that.”

Will we see the same again this weekend? Before the last race Ferrari believed the cooler temperatures would benefit their car. That did not play out, which bodes poorly for their chances; the Styrian Grand Prix is predicted to be overcast, and Pirelli are bringing the same tyre selection as at Paul Ricard, without the softest C5 compound that Ferrari found their advantage on.

Following Friday’s practice sessions at the French Grand Prix, both Mercedes and Red Bull raised concerns over the severity of the kerbs beyond the track limits at turn two. After examining the kerbs, however, race director Michael Masi left them in place.

He explained the reasons for his decision after the grand prix, pointing out the kerbs had been exactly the same in 2019 when F1 last raced at Paul Ricard.

“They were over two metres from the edge of the track,” Masi added, “so you had to be completely off the track to actually come in contact with them.

“And probably most importantly, yes, they were reviewed on Friday night, so following the discussion at the drivers meeting, I could physically go down to turn two and have a look at everything [and] I did satisfy myself that everything was quite correct.”

Masi stood firm behind the need to impose physical track limits at the boundary of the circuit. “As we’ve heard on a number of occasions, particularly this year, both from team principals and drivers, they want physical limits and there was very clearly a physical limit.”

The Red Bull Ring has more aggressive kerbing, which could renew the teams’ love-hate affair with hard track limits. Don’t expect there to be compromise from race control, however, as Masi noted “there were no issues at all” during Sunday’s race.

Williams off the back foot

Williams had what George Russell called “our best race we’ve ever had together” at Paul Ricard, finishing 12th and ahead of a Ferrari, an Alpine and an AlphaTauri.

The team’s struggle over several seasons has been clearly documented, and they are still looking for their first point since 2019. But Russell said that their French Grand Prix performance wasn’t down to luck.

“We were there on merit, the car was good, we made that strategy work, really well managed,” he said. His 12th place finish also helped Williams reclaim ninth in the constructors’ championship from Haas, after a few races where attrition had caused 2021’s slowest team to technically finish ahead.

If the Styrian Grand Prix proves complicated for tyre management, as at the French Grand Prix, Williams may finally have a chance to end their points drought.

At last year’s season opening race in Austria Ferrari team mates Leclerc and Sebastian Vettel made contact. A few other teams have had near-misses with their drivers in recent races.

McLaren’s Lando Norris and Daniel Ricciardo have, for the most part, played relatively nicely with each other since becoming team mates, including Ricciardo letting Norris pass him at Imola. However, the gloves seemed at risk of coming off at the French Grand Prix when Ricciardo forced Norris wide to overtake him, something the younger driver wasn’t impressed by.

Much more dramatically, the team mate situation between Nikita Mazepin and Mick Schumacher seems to be deteriorating. Following an alarming near-miss between the pair in Baku, they once again ended up fighting at the French Grand Prix with Schumacher no more complimentary about his team mate’s actions than he had been at the previous round.

Haas team principal Günther Steiner indicated his patience with such antics is starting to wear thin. “At the moment, where we are as a team, with the car we have got, the only opponent they can fight with is their team mate,” he began, adding: “The rule of engagement is: don’t do this stuff. There is no other rule.”

Are you going to the Styrian Grand Prix?

If you’re heading to Austria for this weekend’s race, we want to hear from you:

Who do you think will be the team to beat in the Styrian Grand Prix? Have your say below.