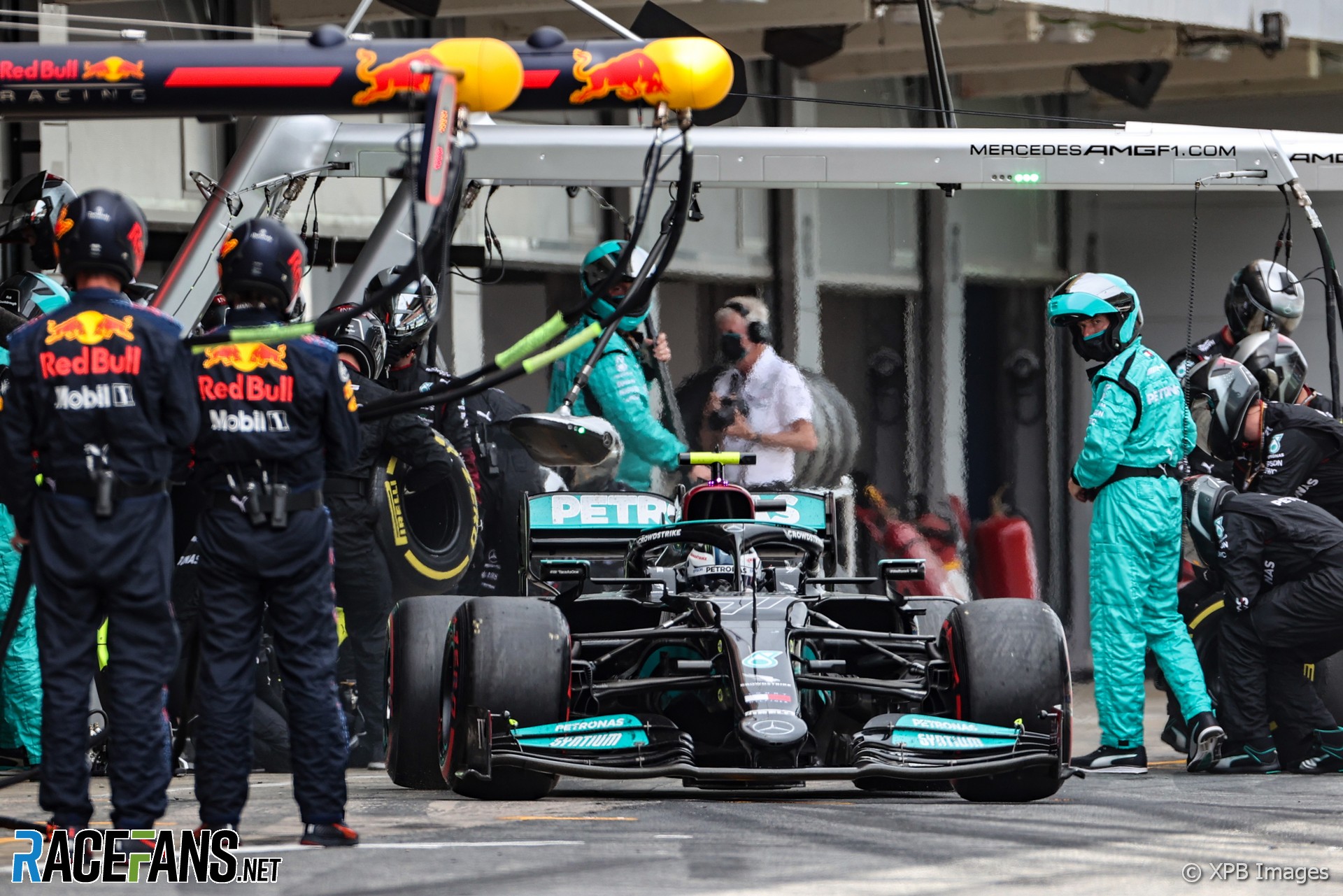 FIA president Jean Todt mentioned during last weekend’s French Grand Prix that he would “prefer less controversy in our sport”.

That seems unlikely to happen, as showed by the furious reaction to yesterday’s revelation that the FIA will introduce new restrictions on Formula 1 teams’ pit stop practices from the Hungarian Grand Prix.

Clearly, many consider it an attempt to clip Red Bull’s wings and even up the championship fight between them and Mercedes. But is that the case and, if so, is it likely to have much effect?

There is no doubt that Red Bull consistently excels at pit stops compared to its championship rival. Mercedes has performed the fastest tyre change of a race once this year, at Imola, which was the first time they had done so since the 2018 United States Grand Prix.

Over the same period, Red Bull has performed the fastest pit stop in 30 of the 69 races. Already this year they’ve pulled off three sub-two-second stops, and have often enjoyed a gap of one to two tenths of a second over the next best.

Nor can a case be made that Mercedes have sacrificed outright speed in favour of consistency when it comes to their pit stops. Valtteri Bottas has had some miserable experiences in the pit lane this year: The disastrous stop which ended his Monaco Grand Prix was the most obvious example, and he lost a significant amount of time with a slow tyre change in Bahrain as well.

So it’s clear Red Bull hold the upper hand in the pits. But how much of a difference are we going to see once the new rules come into force in August?

The changes include ensuring mechanics’ reaction teams cannot be below the limit of what is considered possible for a human being. As with similar rules on drivers’ reaction times when the lights extinguish to signal the start of a race, this is to ensure the mechanics are reacting to a job being completed, and not anticipating its completion to save time.

The new regulations are expected to add up to three-tenths of a second to pit stop times. But it remains to be seen which teams stand to lose the most, and if Red Bull will be affected at all.

F1 drivers typically make one pit stop per race, occasionally two, so that 0.3 second loss will happen once per a 90-minute race. Compare that, for example, to the potential impact of tougher tests on rear wings aimed at preventing them flexing, introduced at the last race.

Lewis Hamilton estimated Red Bull’s previous rear wing was worth six-tenths of a second per lap at Baku City Circuit. Perhaps he was exaggerating, but even if it was only half that, this would still be a gain of three tenths of a second every lap, rather than once in an entire race. A different scale entirely.

Or consider another example which has arguably worked in Red Bull’s favour. Hamilton claimed the changes made to cars’ floors this year were aimed at cutting Mercedes’ superiority. They were 0.68% quicker than Red Bull on average over the course of last year, but over the season to date that figure has fallen to just 0.016%. Over a 90-second lap, that’s a loss of nearly six-tenths of a second per lap. Again, it could be half that, and would still be far more consequential than the pit stop change.

As Sunday’s French Grand Prix showed, a few tenths of a second at the right time can make a lot of difference. Overtaking is so difficult in Formula 1 that the opportunity to gain a place through pit stops is highly prized, which is why teams go to such extremes to perform their dramatically quick tyre changes.

But it isn’t the case that Red Bull are routinely winning races by nicking a couple of tenths of a second off Mercedes in their pit stops. When Max Verstappen jumped ahead of Hamilton in Baku, that was a consequence of the Mercedes driver being held in his pit box because another car was passing by. Nor have Red Bull had things all their own way: Mercedes took a win off them in Bahrain by jumping Hamilton ahead of Verstappen in the pits at a track where, as at Paul Ricard, the lap time advantage of being the first driver onto new tyres was high.

Since in-race refuelling was outlawed at the end of 2009, teams have known races can be won or lost on how quickly they can swap a set of tyres. Following a spate of incidents where wheels were flung from cars which had been released too hastily from their pit boxes, the FIA clamped down, issuing swingeing fines and requiring teams to change the design of their wheel nuts to reduce the chance of repeats.

The latest technical directive represents a further tightening up of those regulations. While it’s true we haven’t seen a wheel come off an F1 car recently, if the FIA has a concern it might happen they aren’t going to wait and see if one does before acting.

Mid-season changes in technical and sporting rules are always controversial because of their potential to disrupt the championship fight and the inevitable perception they are punishing someone for their superiority. Coming immediately after a race Mercedes lost chiefly due to a tactical masterstroke by Red Bull, the reaction the news has provoked is no surprise. But it’s probably not the game-changer some think it is.